A discussion on Hong Kong’s evolving street art scene, where to draw the line between graffiti and art and why there aren’t more professional muralists.

Elsa Jean de Dieu (EJ) I’d say murals created for the public eye that communicate some sort of intention or message. Engagement is particularly important, especially in a busy city like Hong Kong. If you see something on the wall that catches your attention and pulls you away from your phone, then that’s enough to be considered art.

Evelyn Kwok (EK) Street art also creates impact and gets exposed to more people than art exhibited in a gallery. It can be commissioned for commercial purposes, or spontaneously created without any money. With Instagram, a lot of things that people didn’t originally consider art all of a sudden are art. And the fact that it’s on public property – that’s part of the art itself. 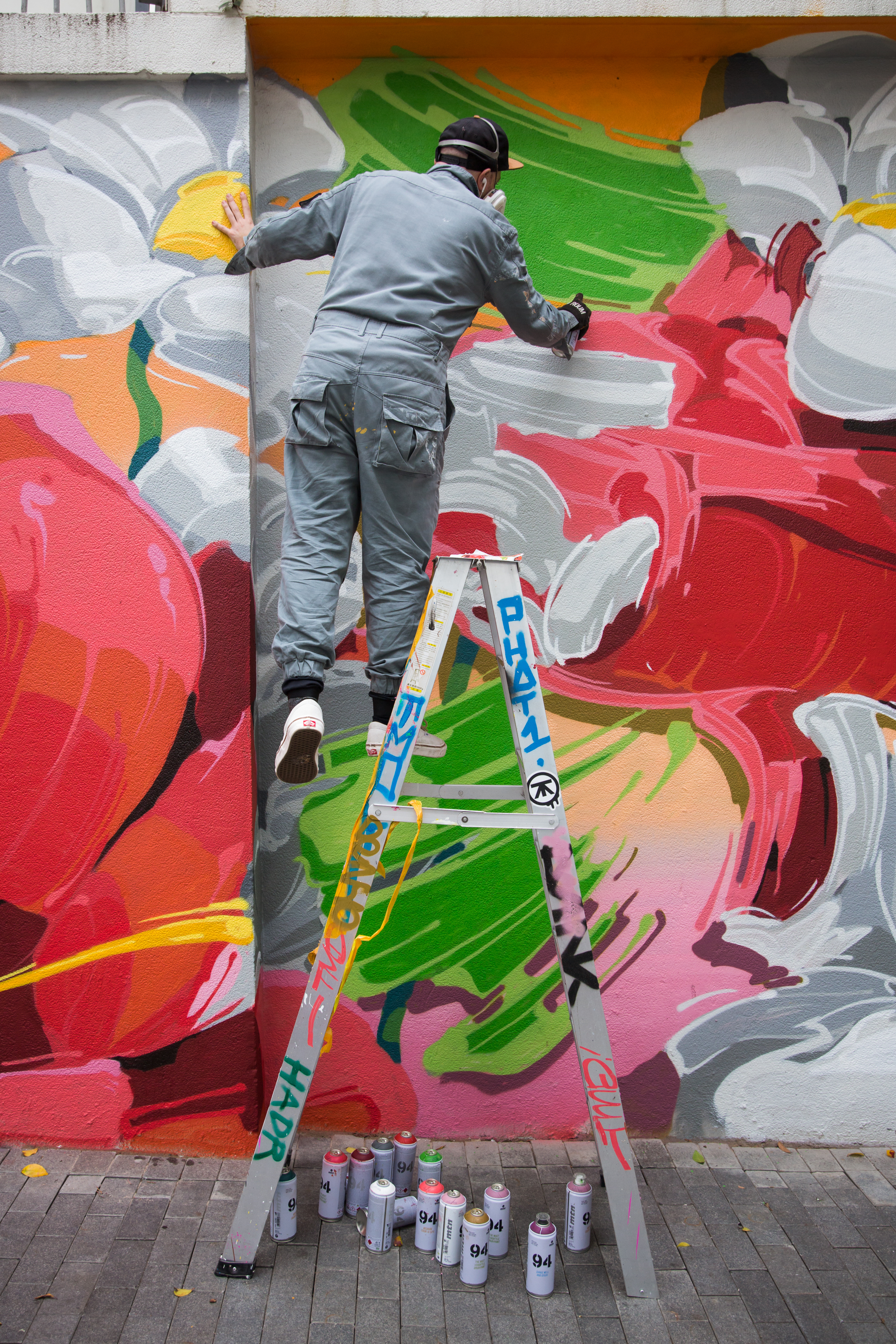 EK That really depends on the place and space. In some cases, like Melbourne, street art is mostly not commercial, meaning it’s not usually commissioned. And even if it is, the commissions are made by local communities that are trying to increase interest and enjoyment of the area. In some cases, where companies get street artists to do murals with a specific commercially driven message in mind, they might seem more commercial. I think Hong Kong’s street art sits in the middle of the two.

+852: Where is the line between vandalism and art?

EK I think aesthetics and message is probably the “hard line”. I don’t mean that all street art has to be aesthetically pleasing, but I do think that it should have at least one message to be considered art. One other thing to consider is perspective: If a street artist chooses a space or building of high commercial value, passersby who aren’t invested in the property are more likely to see it as art, whereas the building owner might see it differently. 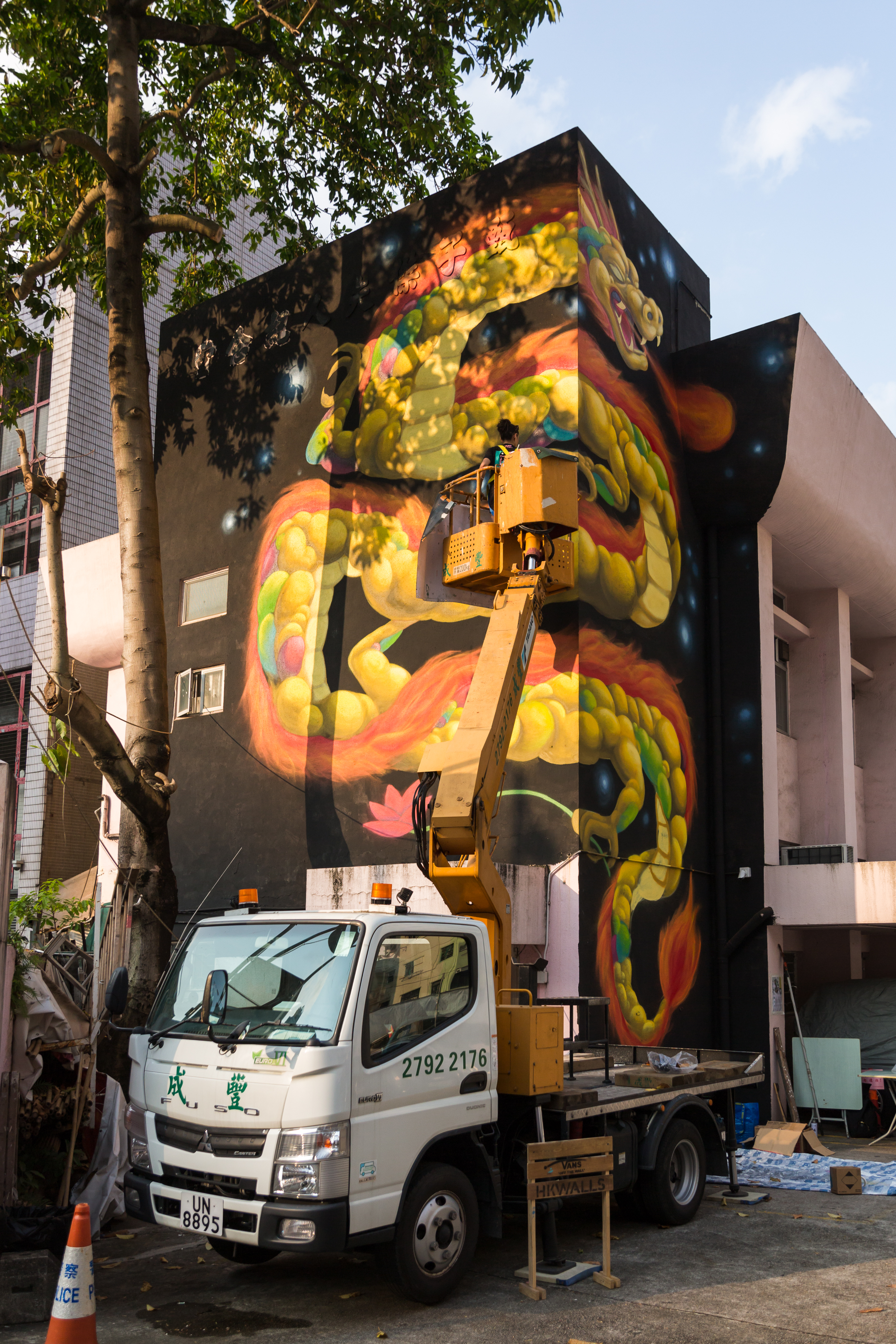 +852: Street art originated as a subversive means of expression. While this has changed over time, does this affect the kind of art you see today?

EJ In Hong Kong, a lot of the artwork you see is driven by HKWALLS [a non-profit organisation for street art festivals]. It gets permission ahead of time so that artists have plenty of time to focus on the details. When it’s illegal, the graffiti looks rougher because you might only have an hour or two in the middle of the night. I have never done anything without being invited or without permission in Hong Kong – whereas in Europe, it seems like street artists just go and do their thing.

EK But just because it’s illegal doesn’t mean it’s not art. Banksy was never invited to do anything in the beginning. He – or they, whoever Banksy is – just did it because they wanted to.

EJ Yes, you can still be an artist and do something illegal, but I think it tends to appear cheaper since it’s produced quicker. If you’re paid, you will probably have the time to make it really beautiful.

EK Sometimes, when someone is under pressure and there’s this urgency to deliver a message that actually adds to the art in a way. When you are invited and paid to create a beautiful mural, of course, it’s also a piece of art. But I think it’s a different message and brings a different kind of awareness. Even if it’s just a scribble, and it makes you think, I’d say it’s art.

EJ For me, there are two kinds of artists: the ones who are commissioned to beautify a façade and then those who do some graffiti on the train or nice buildings, which [sometimes destroys] the space. I definitely love to see different styles, but if there is no message then it’s not really art. 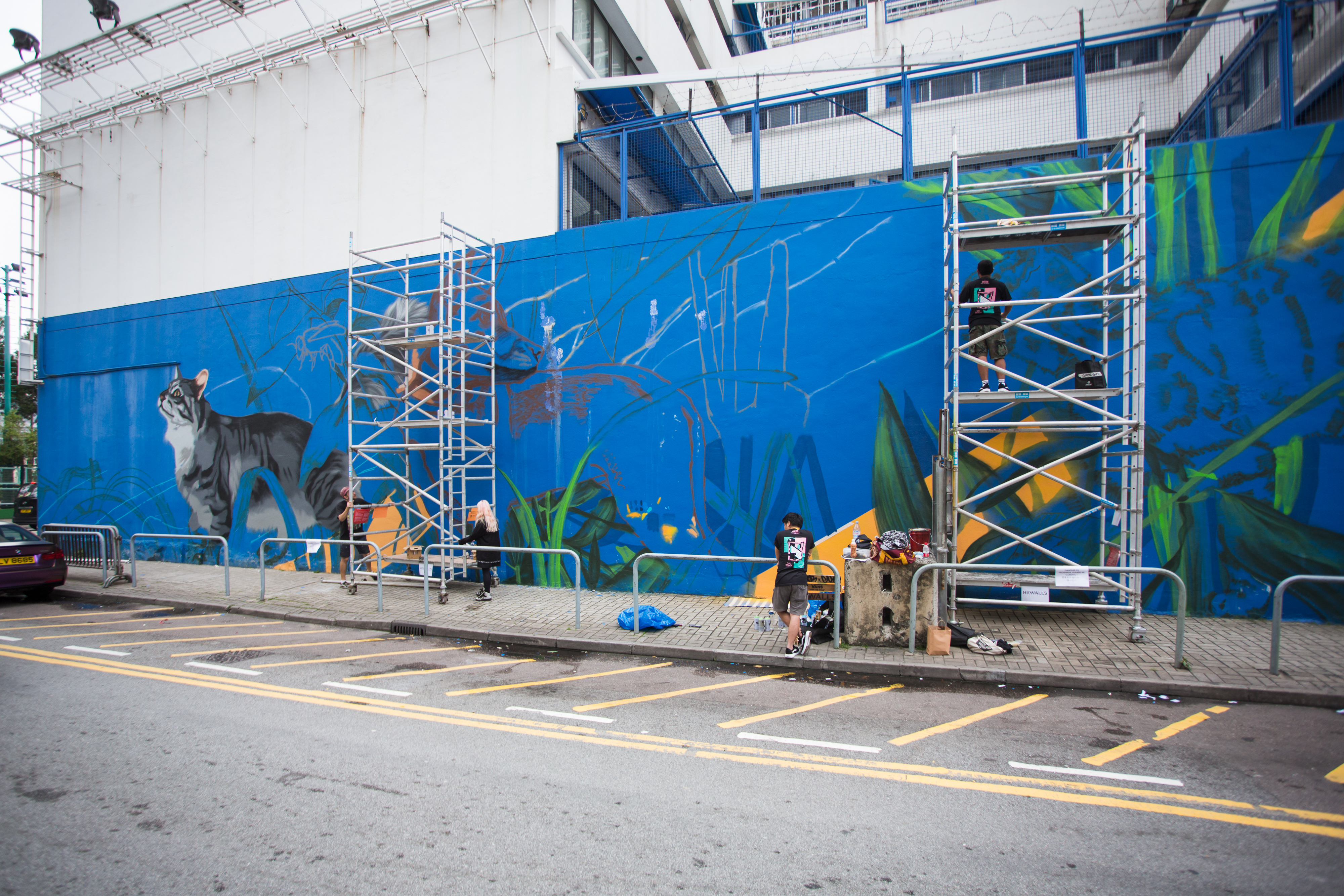 +852: How has the perception of street art in Hong Kong changed over the years?

EJ Since I moved to Hong Kong about 11 years ago, the city has become much more artistic in terms of street art. I think the scene really took off after the restaurant Bibo opened in 2014 and invited several international artists, such as Invader [a famous French street artist] to work on mosaics for it. [In 2017], Invader created all these little mosaics around the city, but then government removed them. It wasn’t until later that they realised their value. I think that’s when perspectives started to change.

EK My understanding of Hong Kong street art is that it actually has a long history, but a lot of it wasn’t created to be art for art’s sake. For instance, the Plumber King painted small ads about his plumbing services for more than 50 years. Over time, his distinct handwriting became famous, and now a lot of graphic designers consider it to be art. Another major local graffiti artist, the King of Kowloon, was famous not for one particular work but for the style. He painted all over Hong Kong but, because it was considered illegal vandalism, his works were eventually scrubbed off.

EJ I think street art has become more mainstream lately. I worked on a mural in Central for Uma Nota restaurant which has become somewhat iconic. The government has actually asked me to do a few projects, so you can see that attitudes are changing. They’ve started to realise it can actually attract tourists.

+852: Can street artists earn a living in Hong Kong?

EK In general, artistic expression is less appreciated in Hong Kong culture compared with Western culture. At the Academy, a lot of students have parents who are pushing them to become doctors, lawyers or scientists. So there’s a lot of social pressure to prioritise money.

EJ It’s really hard, if not impossible, to make a living from street art alone. Most artists have full-time jobs and street art is a hobby. I’m trained as a peintre décorateur, so the majority of my commissions are special paint finishes for interior walls and ceilings for companies like Pure Yoga, Chanel or Soho House. +852: What does street art add to the travel experience in Hong Kong?

EJ Travellers these days look for street art wherever they go. They love to take pictures of artwork and see the different local styles, so I think street art helps express Hong Kong’s identity. EK It also adds something special to Hong Kong’s urban landscape. If you look at the skyline, it’s clear that Hong Kong people love colour. The buildings are pink, green, even rainbow-hued. Without this colour the verticality and dense grids would be overwhelming.