Sure, big-name designers occasionally pay homage to runway looks from decades past, and a boho-chic blogger might raid grandma’s closet for a retro accessory to complete their outfit. But online fashionistas rarely use “trendy” and “traditional” in the same sentence. Except in the Philippines, where independent designers are reviving centuries-old styles for today’s trendsetting pieces.

Traditional fashion hasn’t always been in vogue in the Philippines. Throughout recent centuries, Spanish, American and Japanese colonisers controlled the country’s aesthetic hierarchy, leaving many Filipinos to believe that everything imported is better than anything local – from brands to skin colours. Growing up in Manila, the only time I would see the graceful, vaulted butterfly sleeves of a terno dress or the intricately woven gold threads of a tambourine necklace was when older people wore them on television or at formal events. Over the past few years, though, spurred by a surge of “Pinoy pride”, what was once outdated has become newly fashionable.

Now, a small cadre of designers – most of whom don’t have a formal fashion background – is serving a market hungry for modern, local fashion. Last August, media group ABS-CBN reported that Filipinos have started to “shift to ‘patriotic shopping’ amid [the] rise of global brands in the Philippines”. A study by marketing firm Havas Ortega has shown that 93% of respondents think buying from local companies is a patriotic act that sustains small businesses, helping to change the world for the better. Nearly 90% of the survey respondents were willing to pay more for brands “that have a cause”.

To serve these conscious consumers, new fashion entrepreneurs have placed social responsibility at the core of their businesses. Many of the companies reviving traditional techniques help provide sources of income for the artisans around the country who are keeping endangered crafts alive. But to truly help these craftspeople thrive, designers have been trying to nurture global interest in traditional Philippine design. They’ve already had some early successes: at the Crazy Rich Asians premiere in LA, actress Kris Aquino donned a bright yellow Filipiniana-inspired dress; last year, famed shoe designer Christian Louboutin used woven t’nalak textiles in a sold-out line of Manila-inspired bags.

More than just a retro fad, this modern revival is an earnest celebration of Filipino artistry. Its leaders are proving that styles from traditional cultures belong in trendy boutiques, runway shows and the wardrobes of discerning dressers. 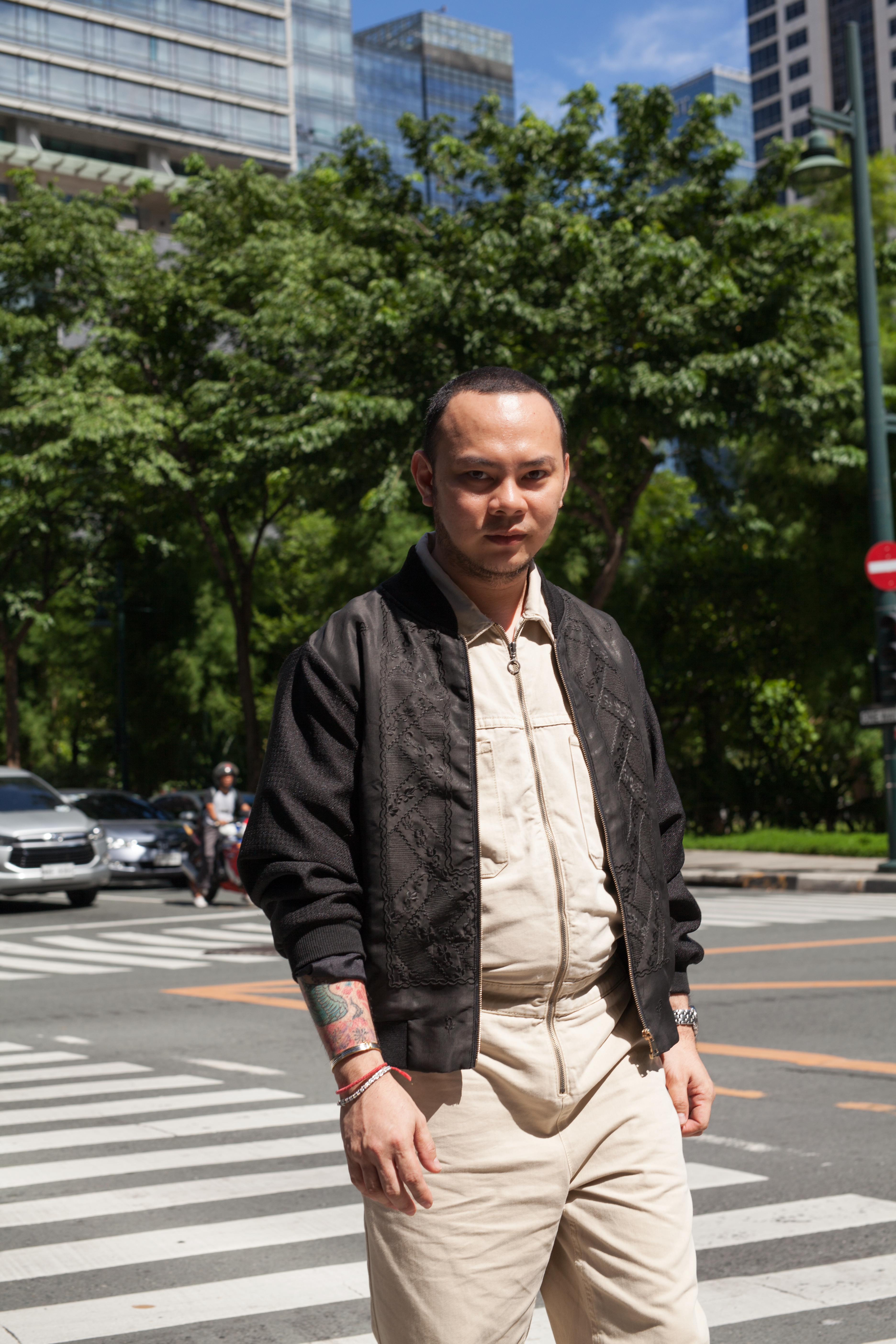 One of the most successful examples of pieces that melds old and new, then gaining international exposure, is the bomberong jacket. The unisex outerwear garment was created by Jor-El Espina, who fused a barong (the national dress of the Philippines made from pineapple fabric) with a bomber jacket. It caught the public eye when Miss Universe 2019 Catriona Gray was spotted in one during her first appearance after winning the pageant.

Iloilo-born Espina didn’t set out to create Miss Universe-worthy streetwear. The design was an accident, as was the former biology major’s entry into fashion. He just wanted something distinctly Filipino that he could wear every day. Being a jacket person, he fashioned one out of the iconic embroidered material. “It turned out really cool,” he says. “My friends noticed it first, and then my clients.”

In addition to the bomberong, Espina sells shirts made out of hablon (an Iloilo cotton weave made of cotton blends in plain or plaid patterns) and custom-made dresses and evening gowns. “I’ve always wanted to do a line that tells the story of tradition, but in a contemporary voice,” he says. “The Philippines is very rich in terms of tradition and culture, yet it is undefined. It is important that we share our heritage with the world.” And he has. Espina was awarded Best Showcase of the Year at the Mercedes-Benz Fashion Week last November in Kuala Lumpur. 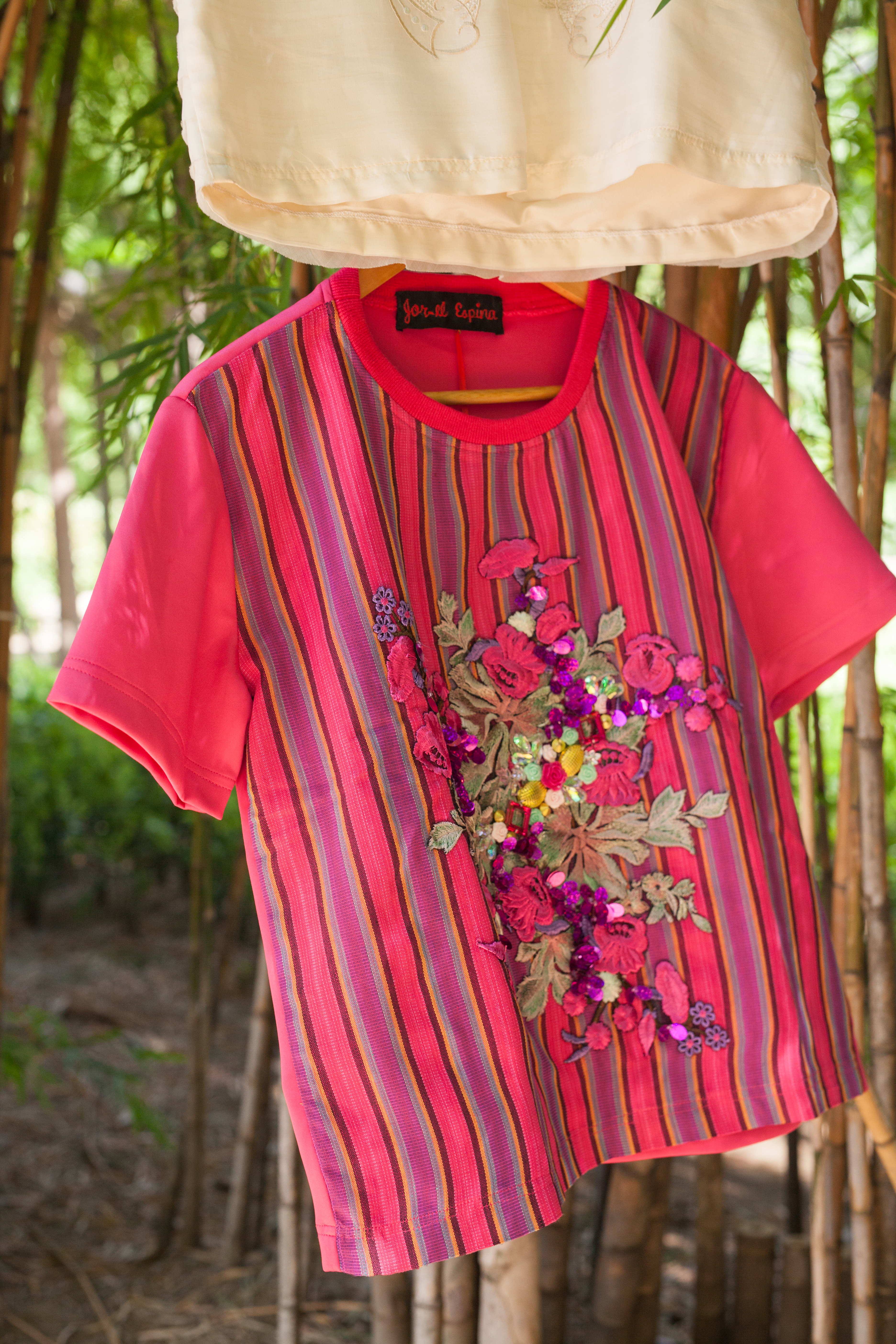 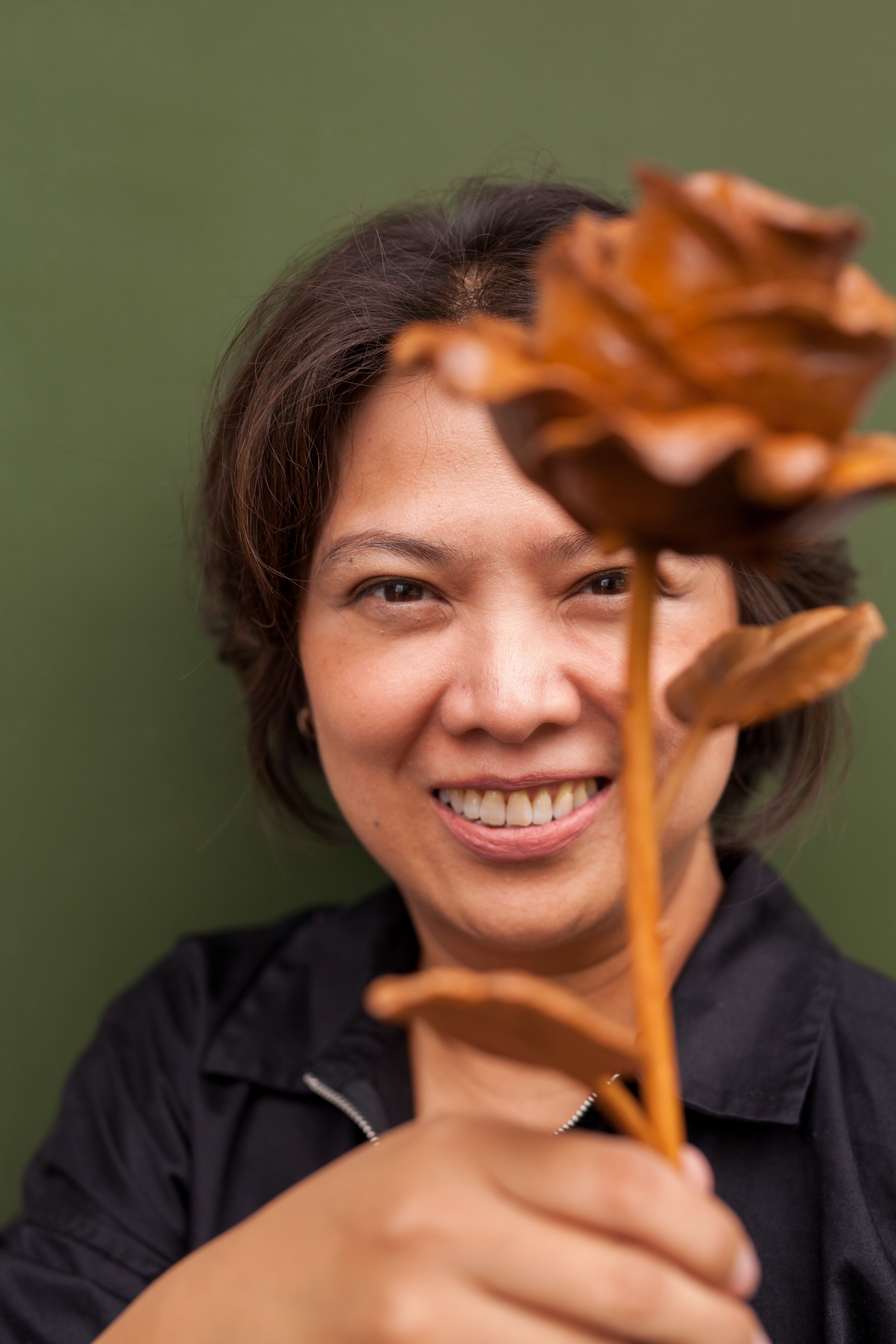 Creativity is a way of life for Charming Baldemor, a 43-year-old designer born into a family of artists in Paete, a remote municipality in Laguna, two hours’ drive from Manila. “You can say it runs in my blood,” Baldemor says. Since the Spanish colonial period, the town has long been famed for its woodcarvers. Her father, Charlie, was a sculptor, and her late uncle, Manuel, was an internationally exhibited artist. His works were even used as UNICEF Christmas cards for 18 years.

“I had no formal schooling,” Baldemor says. “My dad would let me explore the craft under his guidance, and I eventually decided to continue his legacy. I felt that the carving industry of Paete was slowly dying due to a lack of wood supply, causing Paetenian artists to go abroad due to a lack of opportunity. So, I decided to stay and challenge myself to inspire young artists to keep the industry alive.”

In 2014, while selling at a weekend market in Manila, she noticed that the predominantly female clientele was desperate to find unique new bags and accessories. Channelling her hometown’s heritage, she started upcycling wood into purses adorned with weaving patterns from the Philippines. To ensure that the bags’ manufacturing process is compatible with the ethics of urbane patrons, she decided to use wood rescued from old houses, such as narra wood stairs and ipil beams, along with sustainably farmed Pangasinan teak.

The floral, lace and geometric designs add femininity to the wood. “I’m a big believer in women’s empowerment,” Baldemor says. “Look at me, a female artist, literally carving my way into the industry by creating work that evokes the feminine spirit, using a traditionally masculine material like wood.”

Guaranteed conversation starters at cocktail parties, the bags have become must-haves for powerful women in Manila high society. But Baldemor’s heart is with those in need. As a member of the Zonta Club of Makati, she supports two of their projects: the Environs’ Psychological Center for Sexually Abused Children and the Empowering Women Scholarship Program. Through these projects, she donates part of her sales to scholars and rescued women who are trying to get back on their feet. 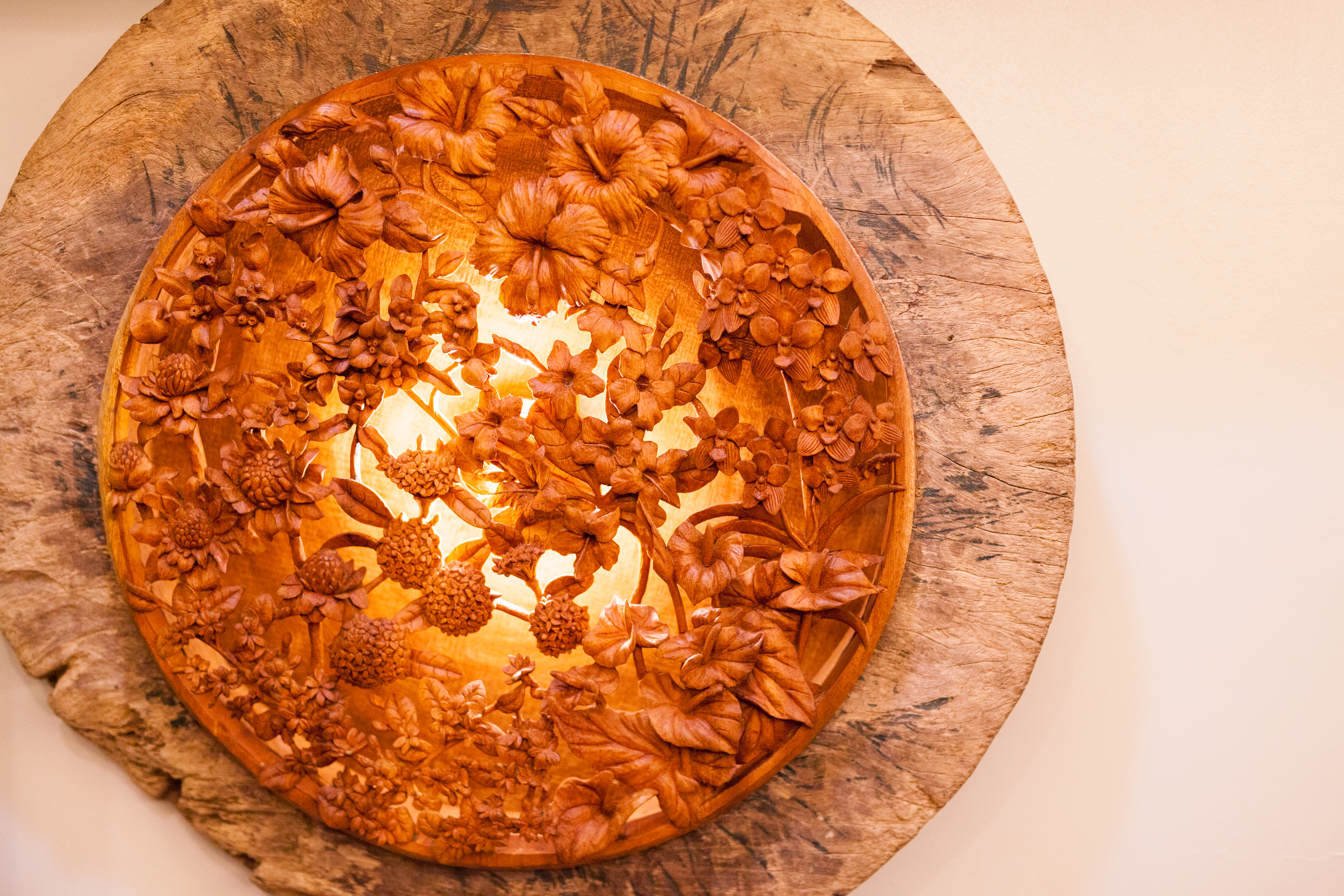 Helping local communities is central to the Anthill Fabric Gallery. Founded by 35-year-old Anya Lim and her mother Annie, ANTHILL (Alternative Nest and Trading/Training Hub for Indigenous/Ingenious Little Livelihood seekers) turns indigenous materials into chic dresses in order to uplift lives. “ANTHILL is a fashion brand, but its core is community enterprise development,” says Lim, who launched the project in 2010, after a decade of work in the development sector. “It utilises fashion and weaving as the means to provide a sustainable livelihood.” 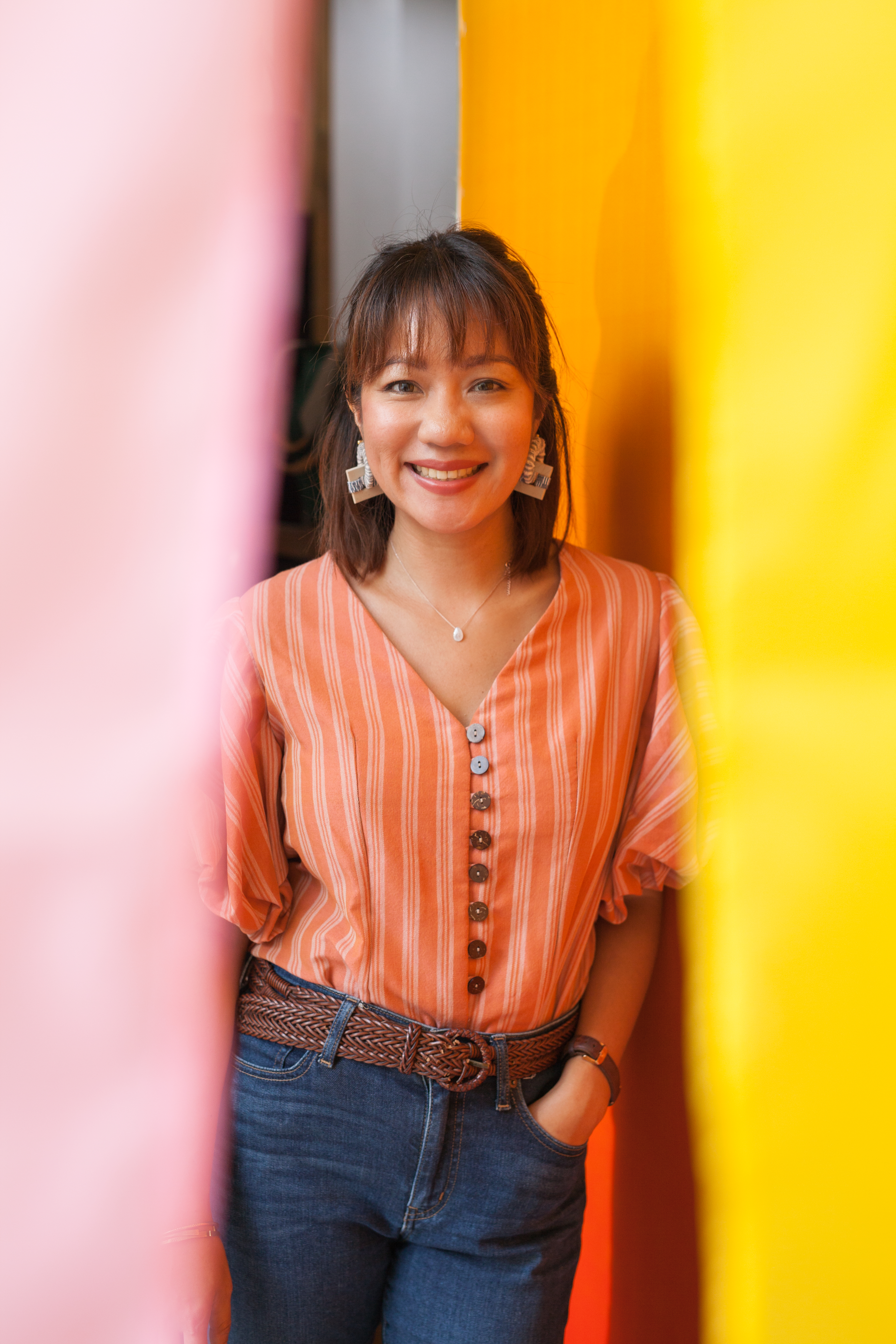 ANTHILL also seeks to elevate Filipino aesthetics. “ANTHILL was founded to address the decline of the weaving culture in the Philippines, and the lack of employment opportunities for women in the countryside,” Lim says, recalling a trip to a weaving village in Banaue, which had turned into a ghost town. “The younger generation had gone to become tour guides instead of learning the craft.”

In contrast, she remembers going to India and seeing how local pride for traditional clothing fostered a sense of political empowerment. Lim learned about “Gandhi’s great love for his charkha spinning wheel, and how it paved the way for the khadi [handwoven cloth] movement”.

She adds, “Gandhi said that the exit of charkha drained creative talent and wealth from villages. Returning the charkha restored villages to their rightful place.” She hopes the same for the Philippines’ weaving communities, “that they may be able to value the richness of their skill and tradition, taking pride in who they are and no longer having to migrate to urban areas”. 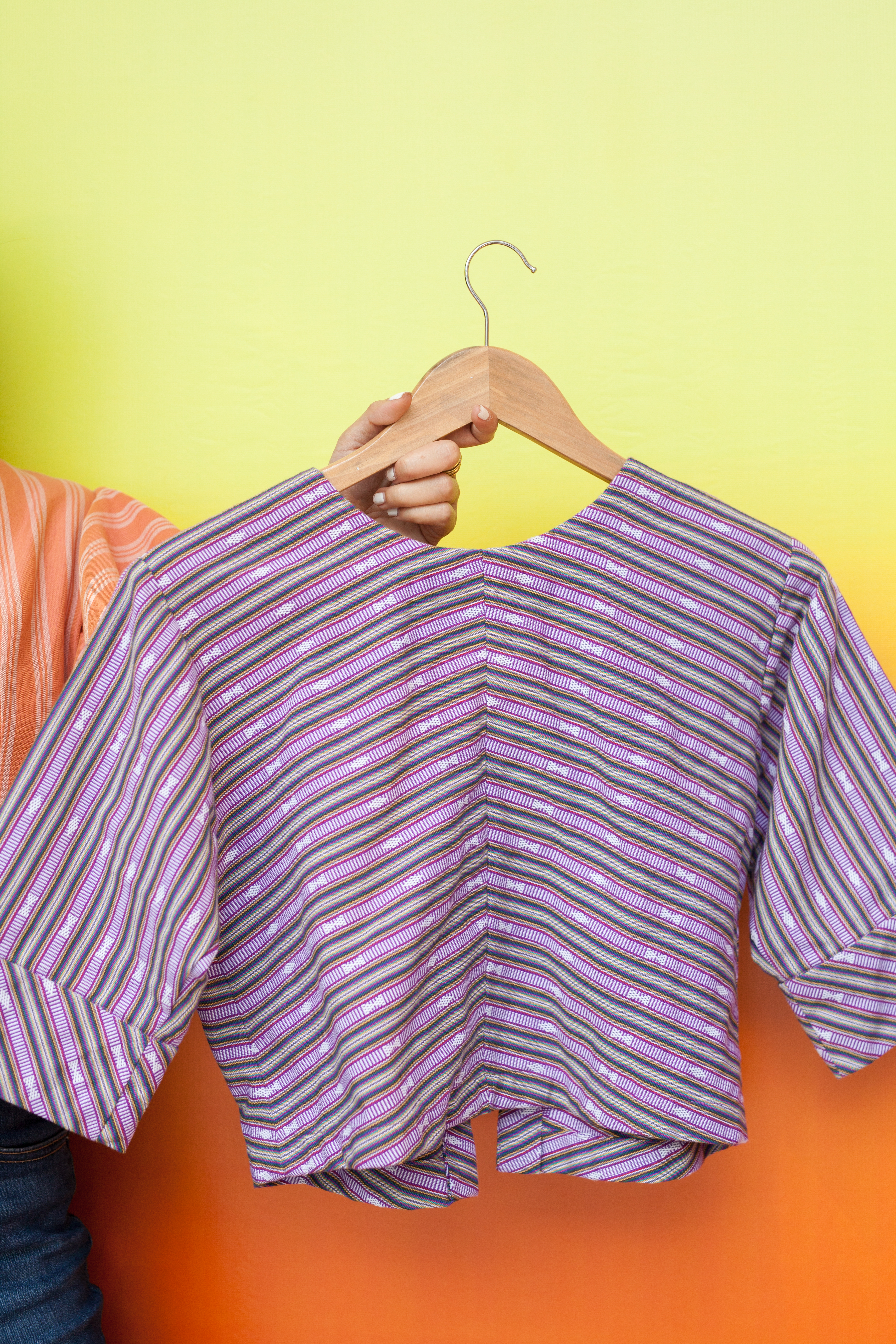 Using contemporary shapes, ANTHILL hopes to teach today’s youth to treasure traditional clothing and incorporate them into their everyday wear. The fabric patterns are inspired by weaves from Abra, Cebu, Ilocos, Bukidnon and South Cotabato. Best sellers include the Palawit, a classic boxy blazer made from Binakol (fabric with geometric patterns with optical illusions); the Panyo, an asymmetrical skirt made with soft Kantarines fabric (a traditional weave usually in plain, striped or plaid patterns); and the Estefania blouse, a terno top with puffy sleeves. All the garments are handwoven by partner communities around the country.

“Our heritage, skills, talents and culture are sadly undervalued and overlooked in our country,” says Lim. “We want to celebrate the richness of our heritage and not let it be overpowered by colonial influence. We want to address the poverty of identity among the younger generation and give them reason to take pride in their culture through the clothes they wear.”

Twenty-five-year-old Christine Tiu (full disclosure: she’s my younger sister) became fascinated with the centuries-old style of tambourine jewellery while doing research on Philippine cultural heritage for school. Soon after, she co-founded Amami with her childhood friend, Danielle Tan. Neither of them had any fashion training (Tiu just received her master’s in China Studies at Peking University and Tan is an analyst at a consulting firm), but the pair had a lot of passion for protecting the endangered craft of gold filigree – a technique wherein fine metal threads are expertly twisted and moulded to form intricate designs – from extinction. 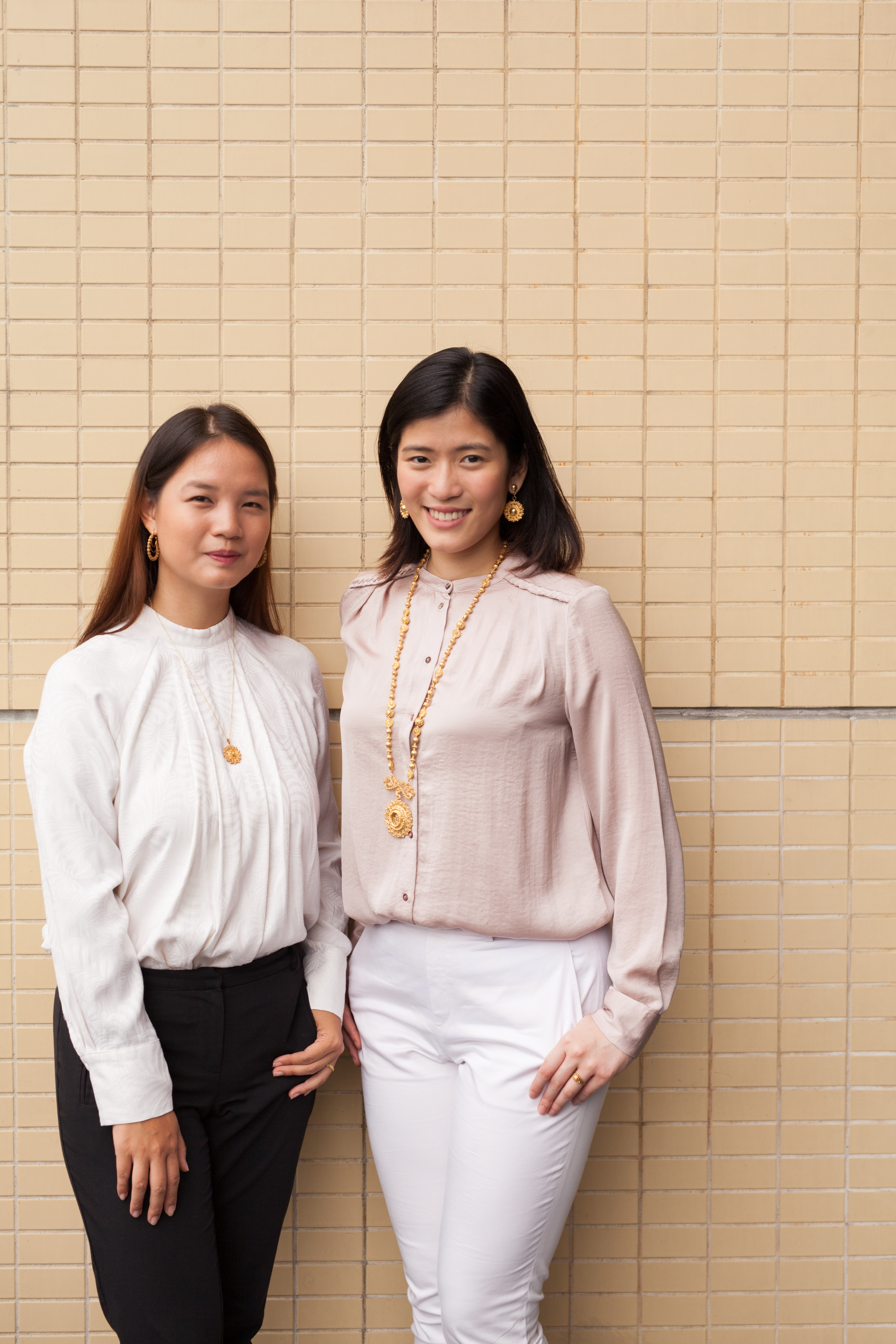 “We learned about the plight of handcrafted gold filigree and the stories of the last remaining artisans who knew how to make these,” Tiu recalls. She saw that the jewellers were beginning to search for jobs overseas as they felt they could no longer survive on their craft, so she and Tan decided to help. “[We wanted] to keep the tradition of handcrafted pre-Hispanic heritage jewellery alive, merging it with contemporary thinking and culture, while at the same time empowering and providing Filipino artisans with sustainable livelihoods,” she says. Proceeds from their sales have been used to help rebuild artisans’ homes, which were destroyed by typhoons. 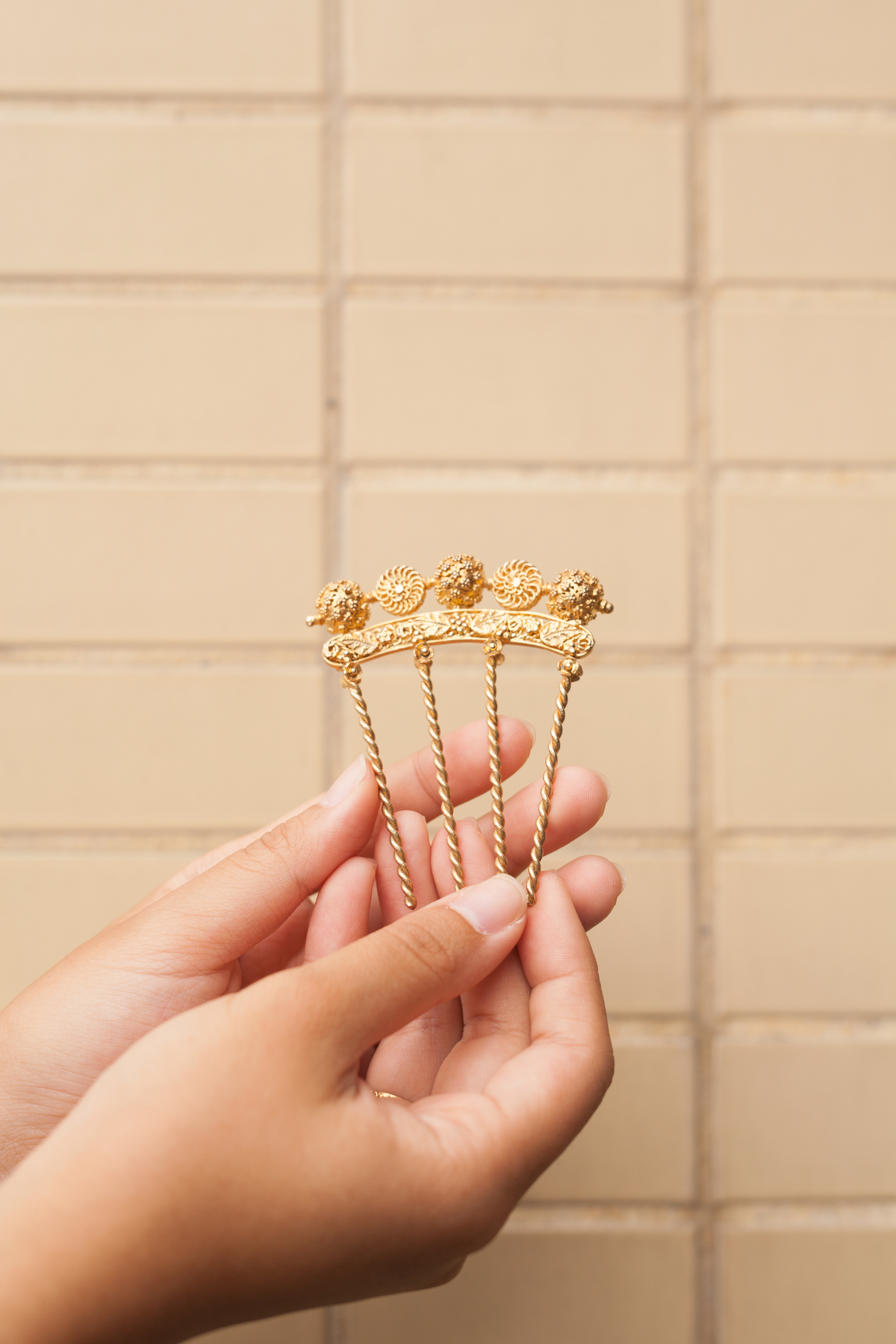 The pair now designs earrings, necklaces, bracelets and peinetas (small decorative combs, or paynetas in Tagalog) that reinterpret traditional jewellery for modern shoppers. Each piece is moulded from silver, then plated in 24-karat gold by artisans in the Ilocos province. The process can take anywhere from days to months to complete. “In an era of fast fashion and mass production, we wanted to make jewellery that was intentional and meaningful to us as Filipinos,” says Tan. “We want to create unique, timeless and classic pieces that transcend trends.” 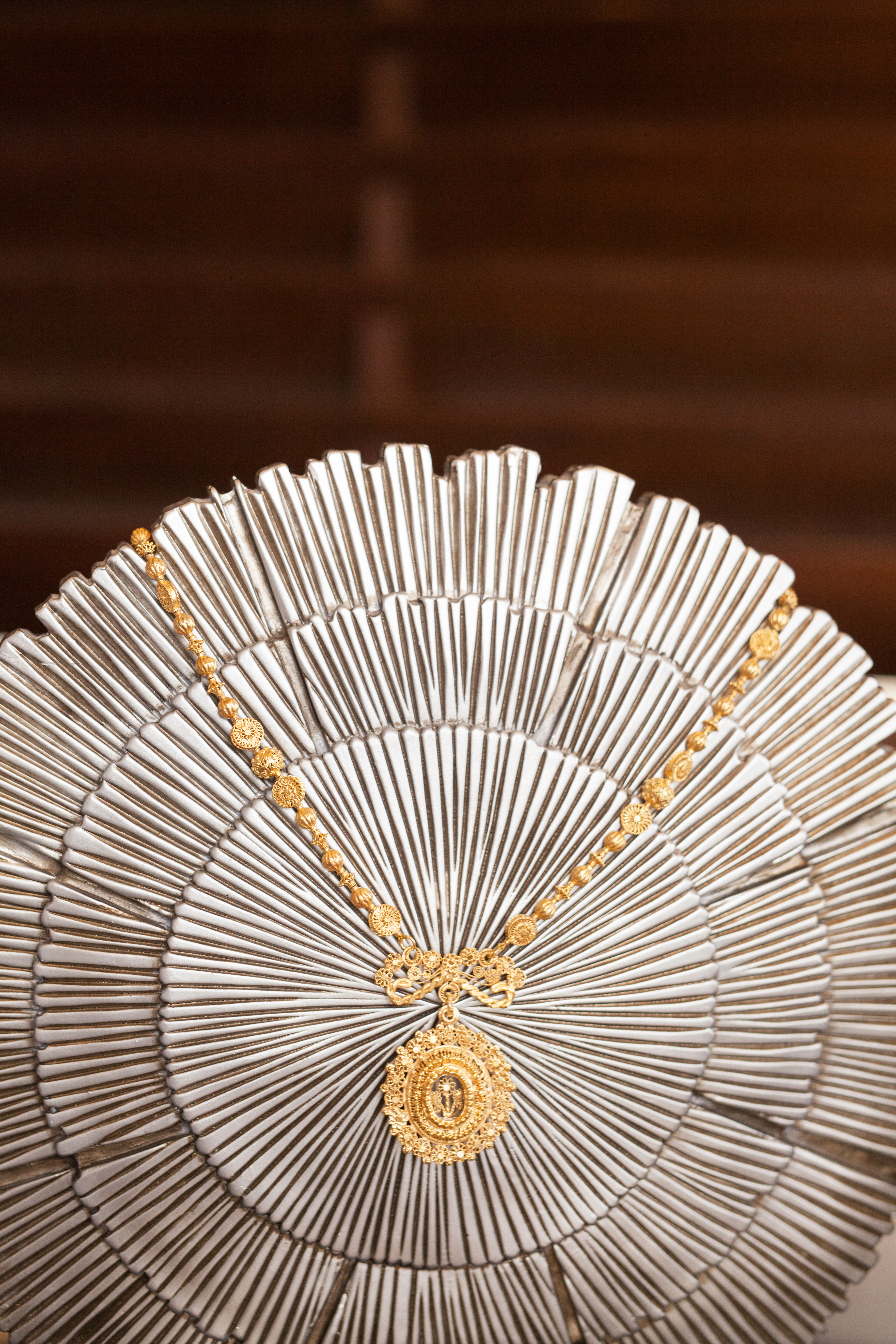 The brand’s name, Amami, is short for “Ama Namin” (“Our Father”), one of the most elaborate rosary beads in classic tambourine design. The shape dates back to the Spanish era, when Filipinos would use traditional craft to show off their dedication to the newly arrived Christian religion. Today, these exceptional adornments look equally impressive when worn with a little black dress for a night out in town.

Classic with a twist in Manila

PIOPIO weaves together funky designs and Filipino fabrics, working with communities around the Philippines to create everything from cute two-piece streetwear ensembles to relaxed beachwear. The latest collections can be found at the retail store, Kubo by PIOPIO – which also serves as a home for other like-minded local brands.

This lifestyle concept store displays dramatic floral arrangements and rustic home décor on the first floor and breezy, tropical-style clothing, bags and accessories on the second – all made by Filipino and international designers. Lanai’s café hosts private functions, along with pop-up events with local designers.

Hidden in a shady, tree-lined compound, a series of 1950s white wooden houses display reimagined eclectic handicrafts, home accessories and Mid-Century furniture pieces crafted by artisans from around the Philippines and Asia. While it may feel as if you’ve waltzed into a quirky, well-appointed home, everything here is for sale.