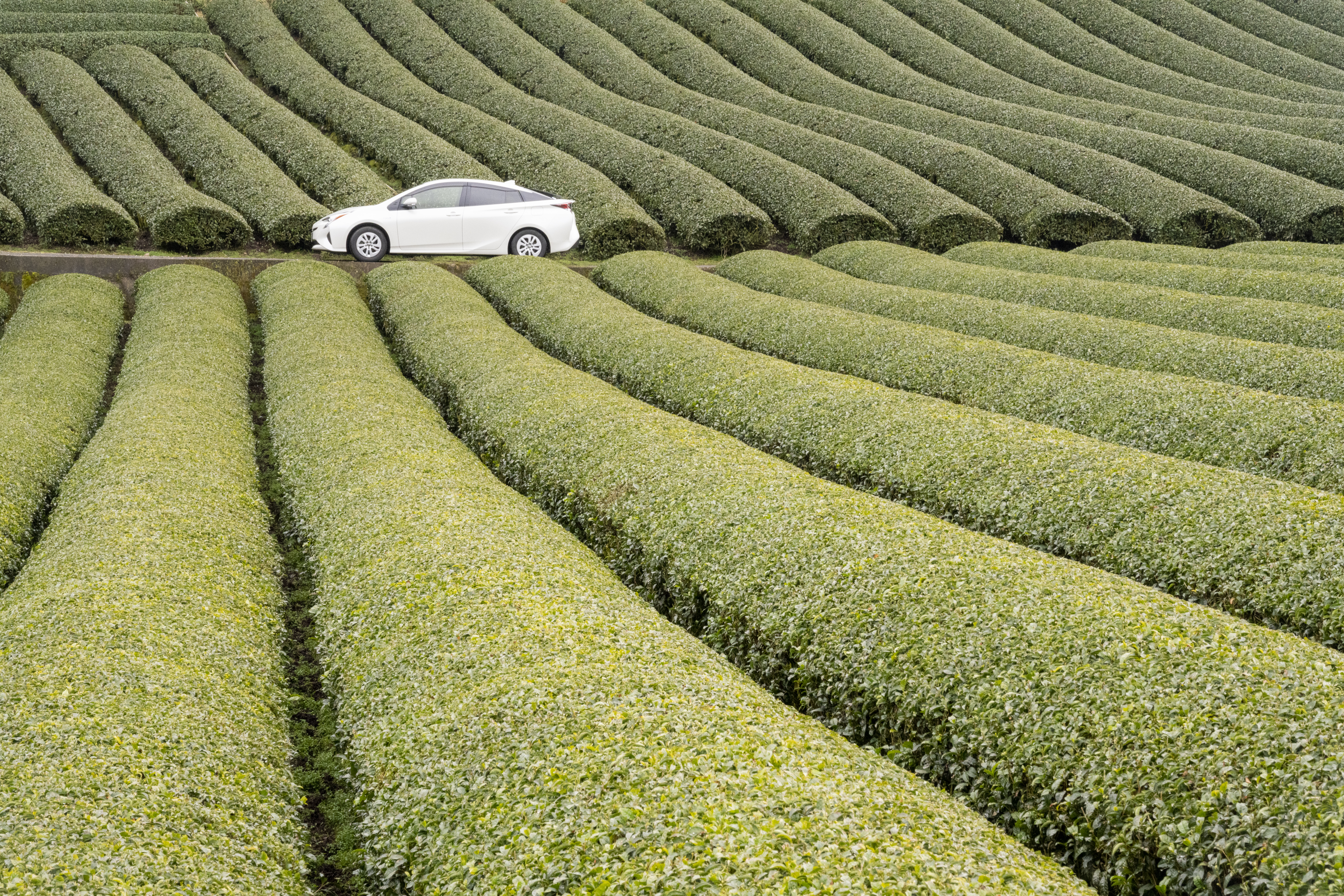 Kyoto has always rewarded explorers. Wandering its narrow streets, you never quite know when you’ll round a corner and find a serene temple, a vivid orange shrine or maybe a white-faced geisha clopping through the streets in her colourful kimono and tall wooden clogs. But with the proliferation of travel blogs and websites and with thousands of Instagram photos of every Kyoto sight, it might seem as though the city’s sense of mystery is fading as quickly as its tourist crowds are swelling. Repeat visitors would be forgiven for thinking that they’ve already seen all that Kyoto has to offer.

But they’d be wrong. You see, Kyoto is the name both of the famous city and the prefecture that surrounds it, and the latter is as full of marvels as the former. Surprisingly, the majority of foreign visitors never set foot beyond the city limits – and until this trip, neither had I, even after living in this country for over a third of a century. So to discover another Kyoto, I decided to rent a car, roll down the windows, turn down nameless roads and get lost in this ancient land. 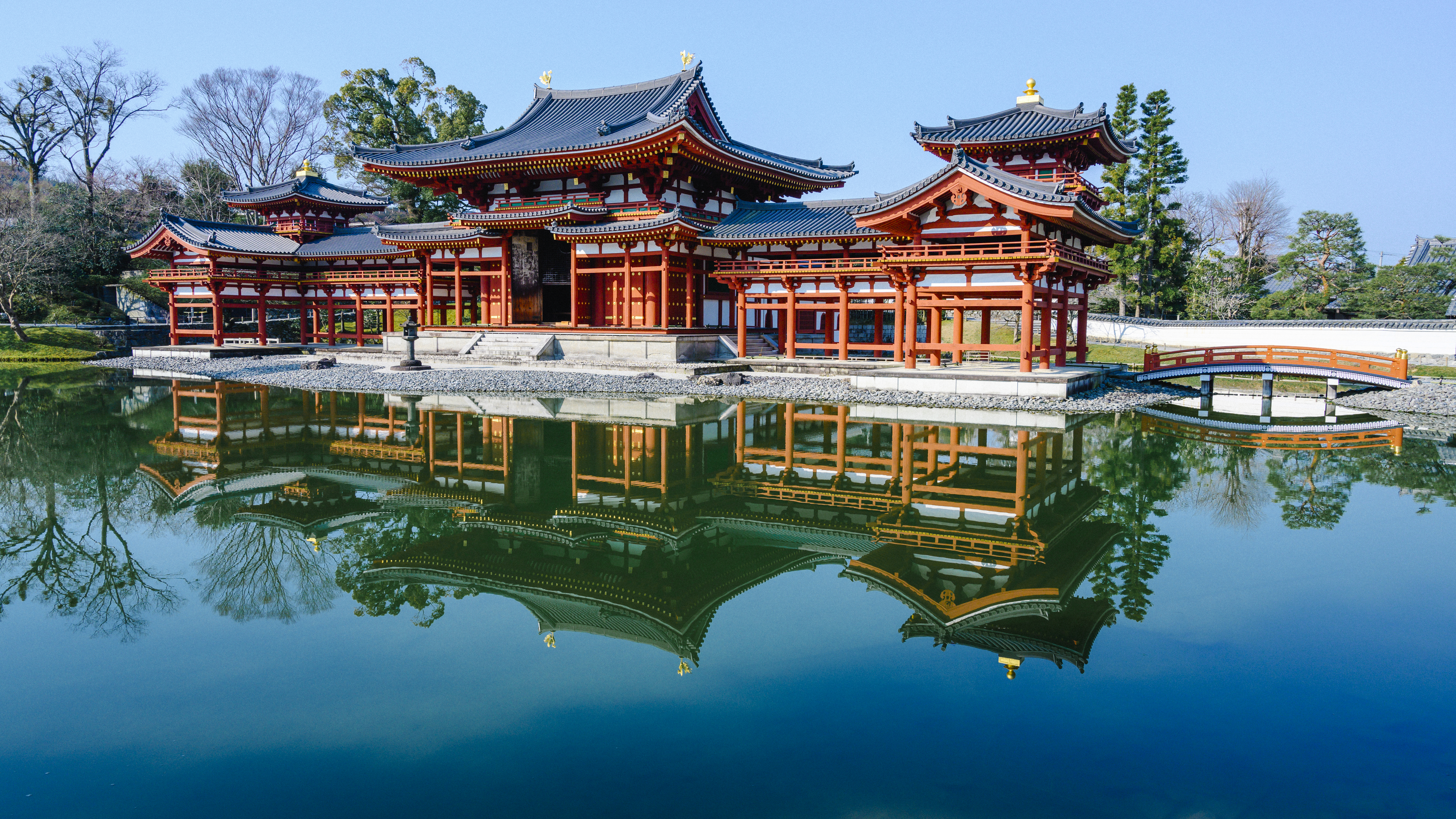 Kyoto Prefecture cuts a long, lumpy diagonal through western Honshu, the main island of Japan. From its narrow southeastern tip, it trumpets out northwest into a diverse land of national parks, quaint villages and verdant farmland before reaching a rugged shoreline along the Sea of Japan. The plan is to travel for six days, driving first south and then seaward, with serendipity as my guide, hoping to discover Kyoto’s lesser-known charms. 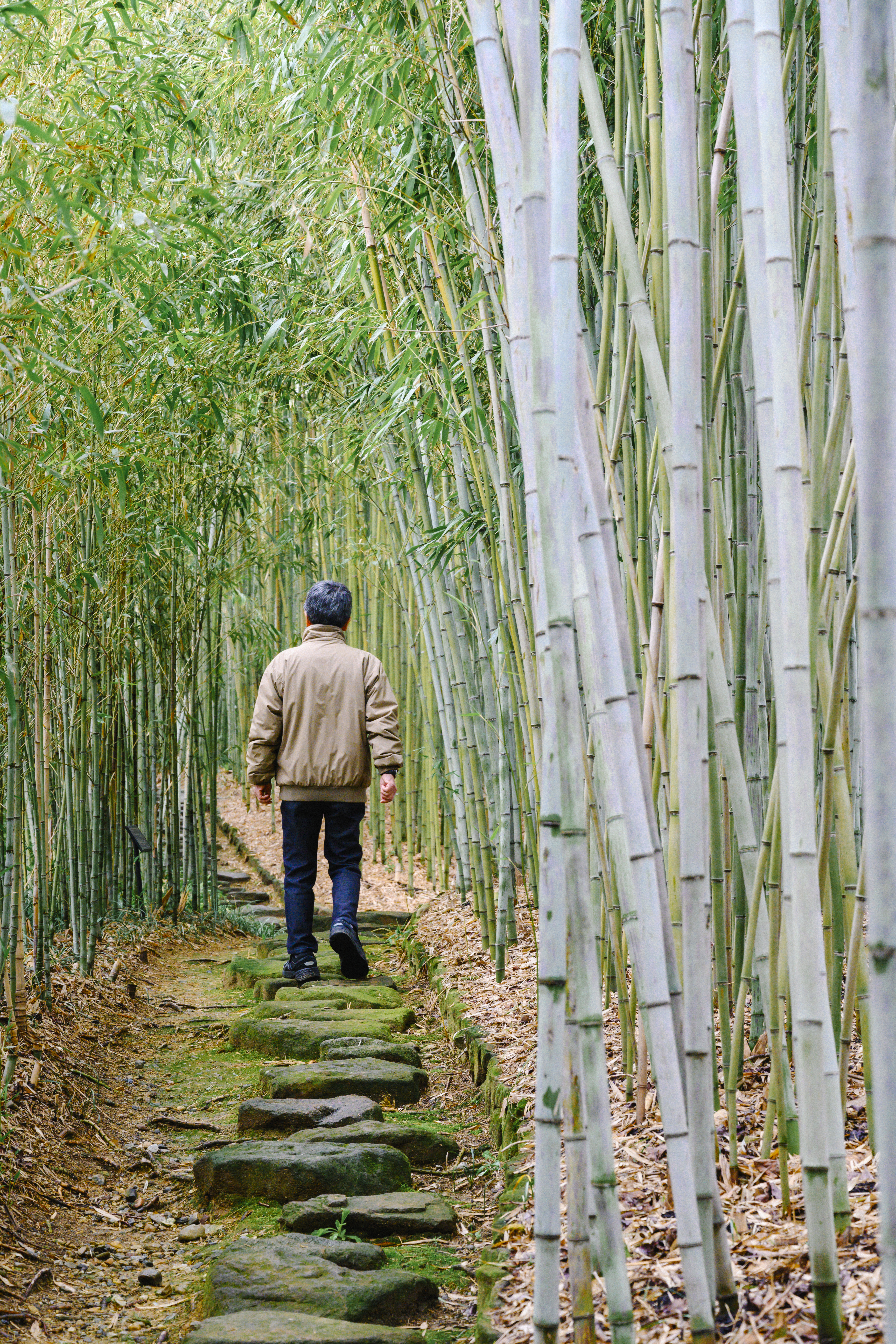 Heading south out of the city, it’s not long before I make my first stop in Uji, which straddles a river of the same name. Uji draws moderate numbers of mostly Japanese visitors because it’s the site of Byodo-in, the picturesque wooden temple that adorns the front of every 10-yen coin. But after a morning stroll through the temple – the elegant shape of its roof resembling a bird spreading its wings – I spend the rest of my day diving deep into the world of tea.

By sheer volume, other parts of Japan long ago surpassed Uji in tea production, but for quality, Uji still reigns supreme. It makes sense, given how long the area has been cultivating tea: It’s where the first plants were brought from China nearly a thousand years ago, and there are tea firms here which have been in business for centuries. 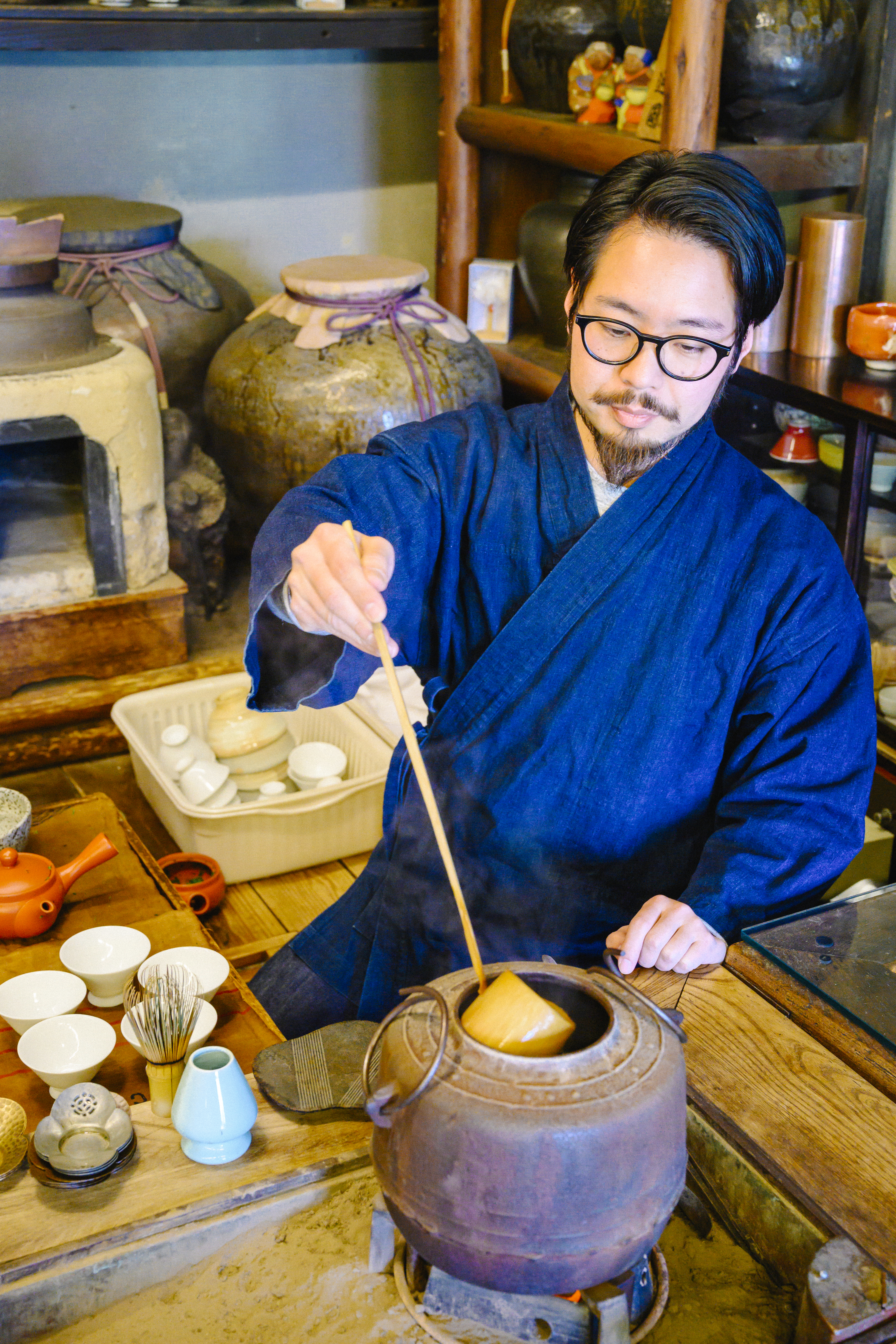 Marukyu Koyamaen is one of them. Established in the Genroku Era, at the end of the 1600s, it produces top-quality tea in several varieties, including gyokuro (a high grade of dried green tea leaves) and matcha (powdered green tea). A tour of its processing plant is worth taking as it reveals some of the secrets behind the production. 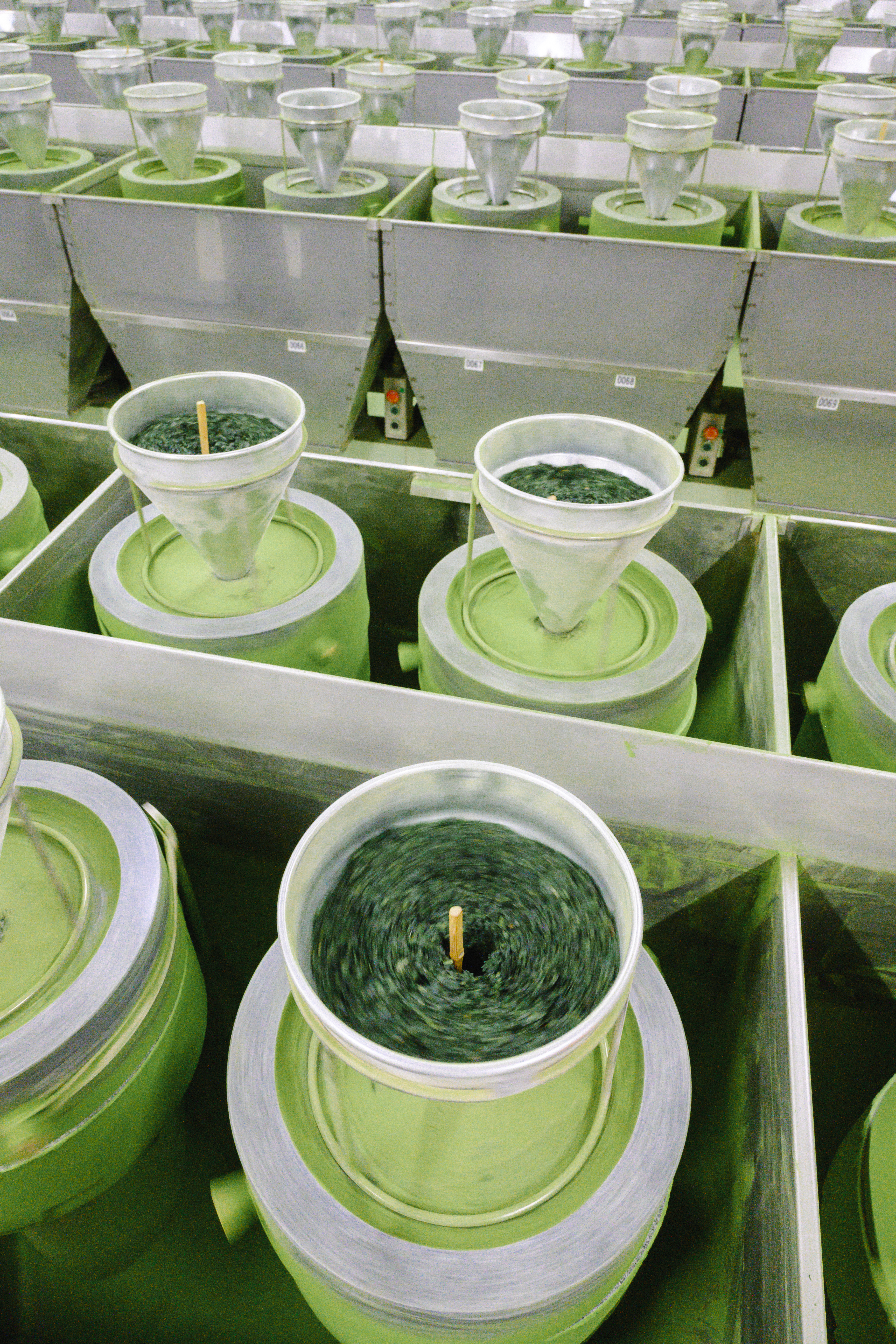 Later in the day I talk to Yusuke Tsuen. His youth – he’s in his mid-thirties – belies the ancient history of his riverside tea shop, Tsuen Chaya. He is the 24th generation of his family to run it. Sitting on the tatami floor next to the small hearth, he prepares cup after cup for his customers – pale yellow gyokuro, frothy green matcha – as his family has been doing for over 800 years.

“In the beginning, my ancestors were in charge of the bridge,” he tells me. “This was the only bridge across the Uji River. After three or four generations, they started selling food and drink to the travellers, and later, as tea became increasingly popular, they opened a tea company.”

I would like to spend more time in Uji, but the roads of Kyoto Prefecture are beckoning. Travelling deeper into the southeastern district known as Wazuka, I inspect the tea fields that run in orderly, picturesque rows along the steep slopes of the area’s hills. I manoeuvre my rented Prius carefully down one of the lanes that thread between the tea fields to take photos of the scenic setting. It’s now time for the long drive north.

Having reached the southern end of the prefecture, I begin the drive northward and westward along obscure one-lane mountain roads hugging the border with neighbouring Osaka Prefecture. Soon, I spot a sign advertising shiitake. In a clearing in the middle of a cedar forest, I park the car at Tanikawa Mushroom Farm, and soon I’m following its owner on a tour of his greenhouses, exploring row after row of vertically stacked konara logs (a type of oak) with mushrooms clinging to them. 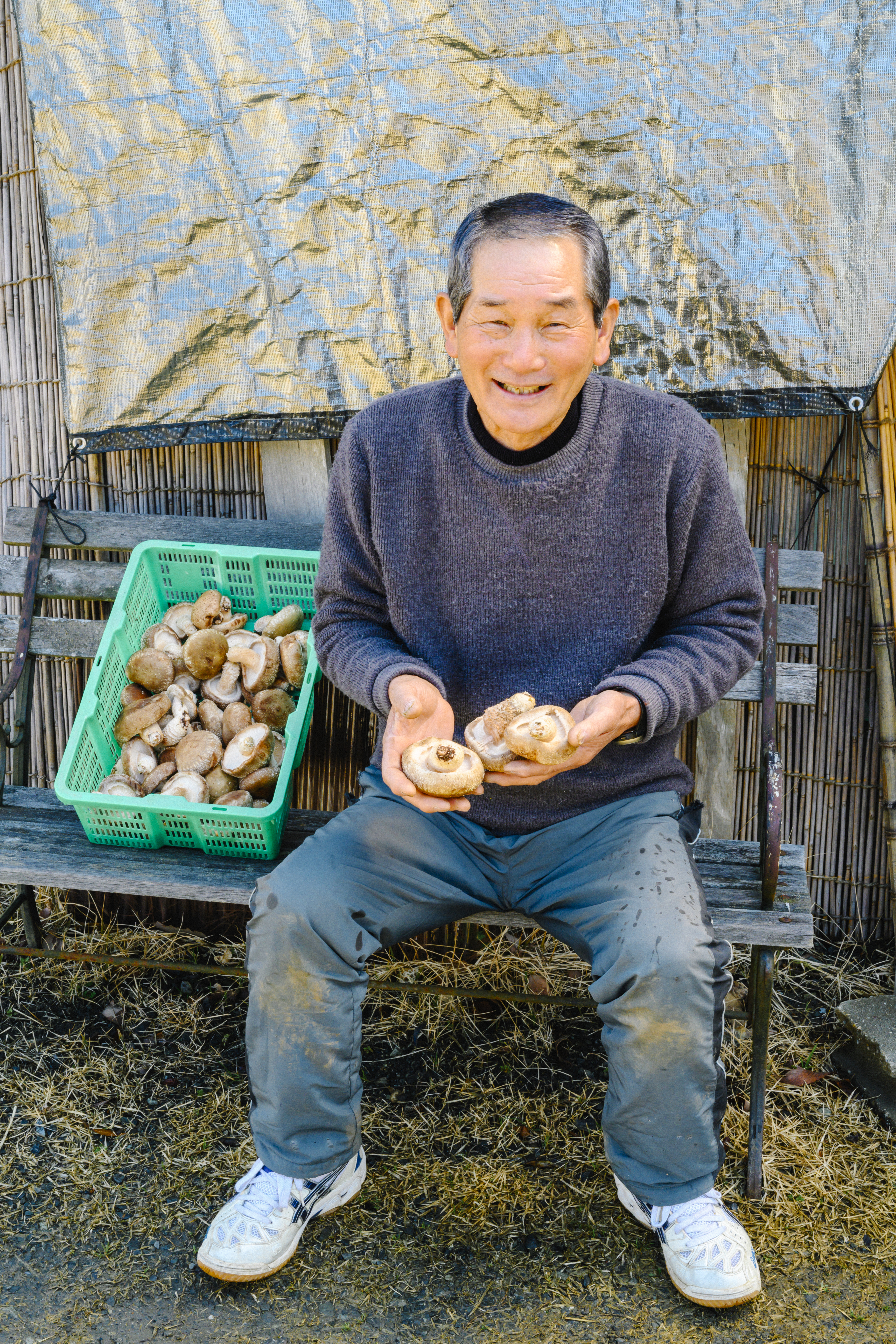 Hiroshige Tani explains that he was once a draftsman in Osaka, but being a salaryman took its toll, and when he was 38, his doctor advised him to consider a more relaxed career path. He quit his job and moved north. He had heard of people making tens of millions of yen per year growing shiitake and decided to give it a try.

Though he doesn’t look like he’s in his early seventies, he tells me that he’s been doing this for 33 years now – adding quickly that he’s not making tens of millions of yen, as there are now all kinds of fancy new methods for growing shiitake in factories. “Those of us who still use the traditional methods can’t compete on price,” he says ruefully. He gives me several plump shiitake, and I drive on.

Many twisting, turning roads later, I emerge from the hills onto the relatively flat northwestern part of Kyoto Prefecture, known as Tango. Once a separate province, it was only incorporated into Kyoto in the 1870s, and it still feels like another world for anybody who has come up from the familiar Kyoto sights of farther south.

Its most famous product is a fabric called Tango chirimen (silk crepe). Elaborate patterns are woven into it, and though all the silk thread used to make the fabric is white, rather mysteriously these patterns turn out to be both visible and palpable. The finished fabric is dyed and sewn into high-end kimono, such as those worn at weddings. 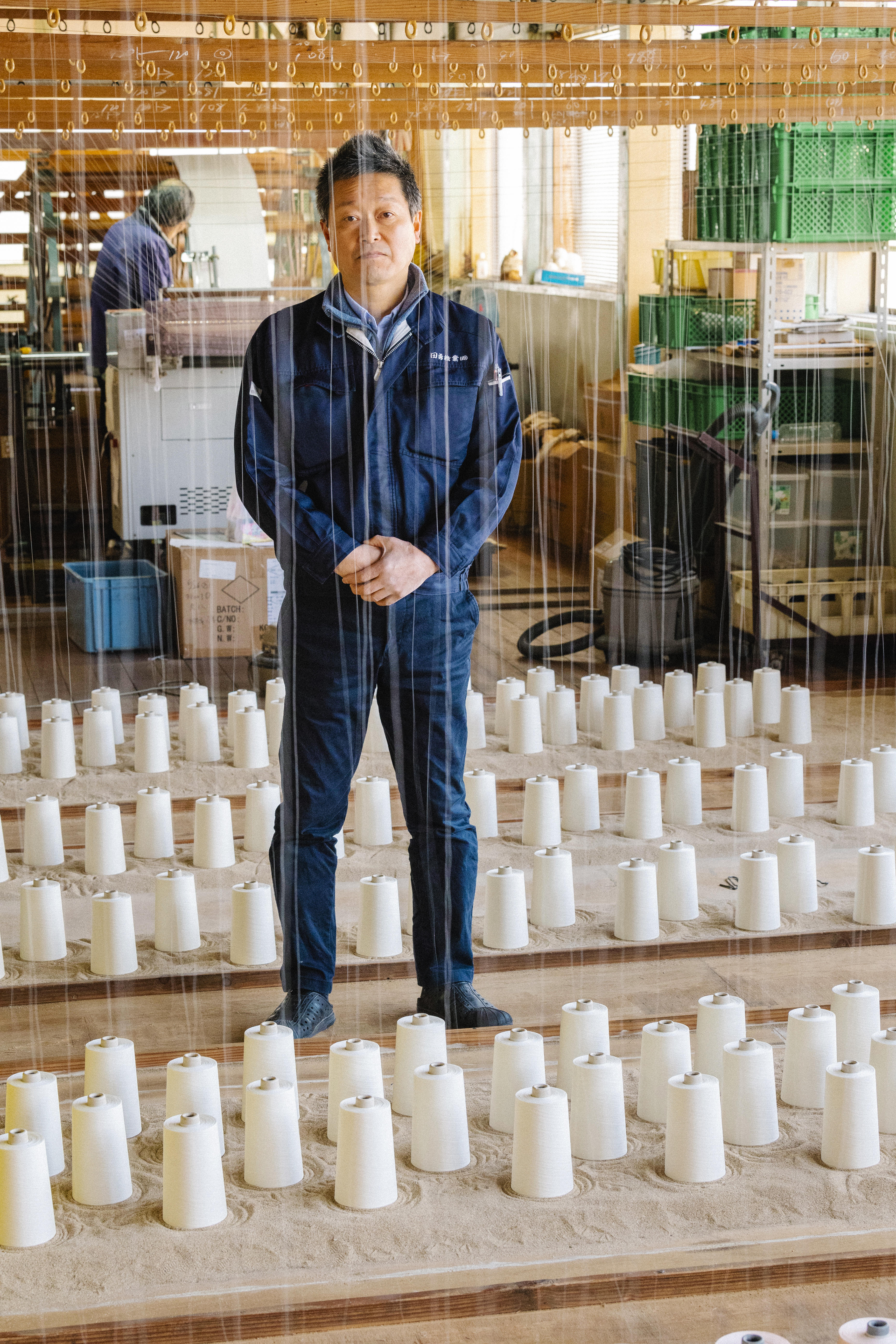 Finding a chirimen factory is dead easy: the clacking of the machines inside can be heard from quite a distance. And that’s how I end up inside the Tayuh factory in the city of Kyotango. Company president Hayato Tamoi has to shout to be heard over the noise of the mechanised looms. “The Tango region produces about two-thirds of Japan’s silk. This area is unusually rainy and humid, and that’s important because dryness is bad for silk.”

But then he adds that half a century ago, there were roughly 10,000 factories like his; today the number has dwindled to fewer than 800. Sadly, Tango chirimen is as much an endangered species as shiitake grown on konara logs.

Just west of Kyotango, I stop for the night at a spot called Yuhigaura. Route-wise it represents the end of the line for me because shortly thereafter, the road leaves Kyoto and enters Hyogo Prefecture. Yuhigaura enjoys a great view out across the Sea of Japan. As I arrive late on a Sunday afternoon, a strong wind is blowing, whipping up the waves and providing a wholly unexpected sight: surfers!

When you think of Kyoto, chances are that surfers will be one of the last things that come to mind, but there they are, and not just one or two but several dozen. They’re almost all men, and though I don’t for a moment consider paddling out there to try to interview them, I do conduct a surreptitious survey of the license plates in the nearby parking lot. I learn that most of them are from the big cities farther south – Kyoto, of course, but also Osaka and Kobe – and I suspect that the next morning, Monday, they will be back home, wearing business suits, not wetsuits, riding commuter trains and buses, not waves.

I backtrack a bit to the eastern side of the bulbous Tango Peninsula, where the fishing village of Ine will be my last stop. It sits in an arc around a harbour so placid that the homes have been built right at the water’s edge, with the lower level of every house functioning as a garage for a boat. This style of building is known as a funaya, literally a “boat house”, and Ine is the only place in Japan – maybe the only place on Earth – where long rows of these houses can be seen. 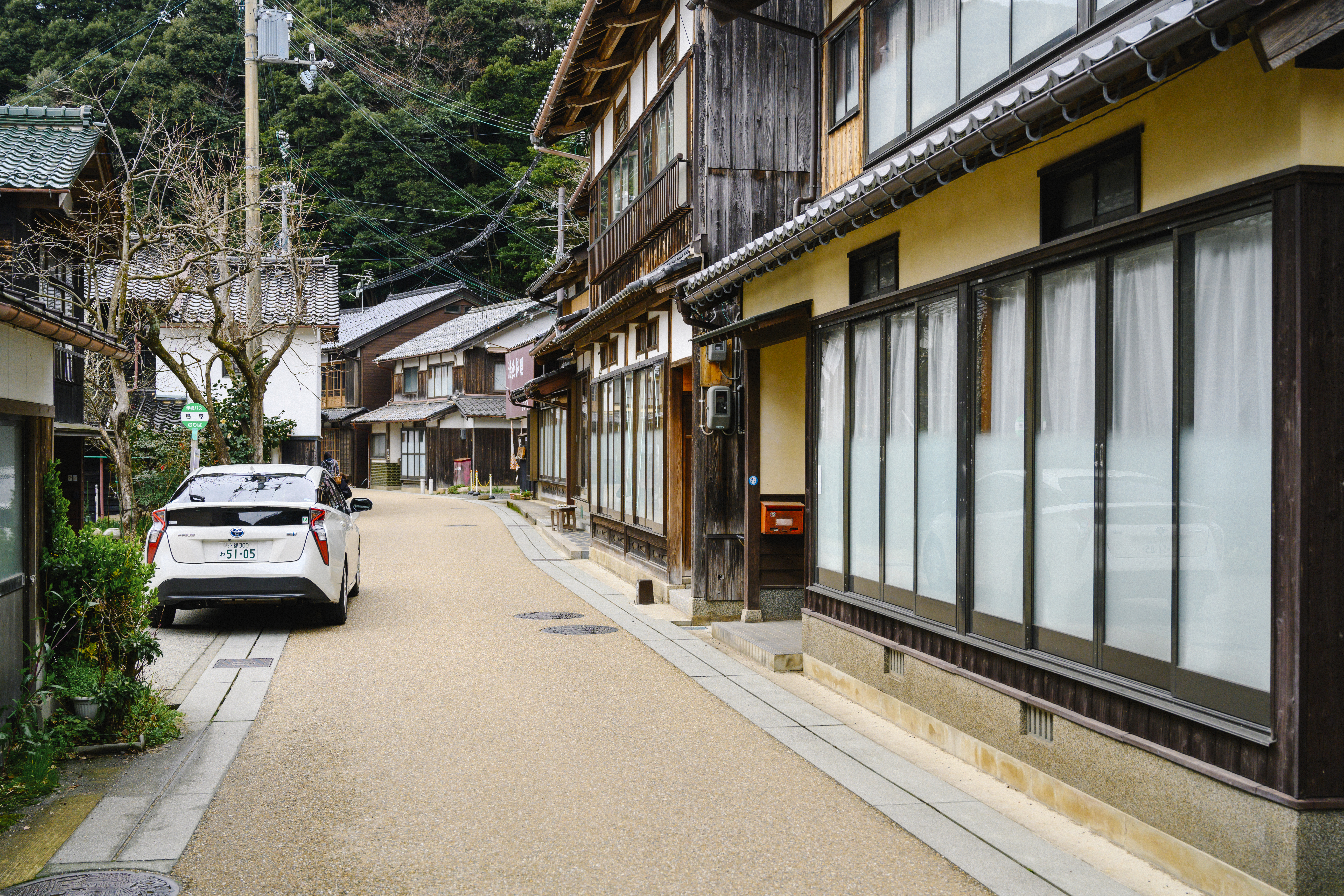 Catering to tourists is becoming an important part of the local economy, but when the fishing boats come in, the townspeople seem to stop whatever they’re doing and head to the docks, both to help unload the boats and to do their shopping for the day’s dinner. Seafood doesn’t get much fresher than it is here. 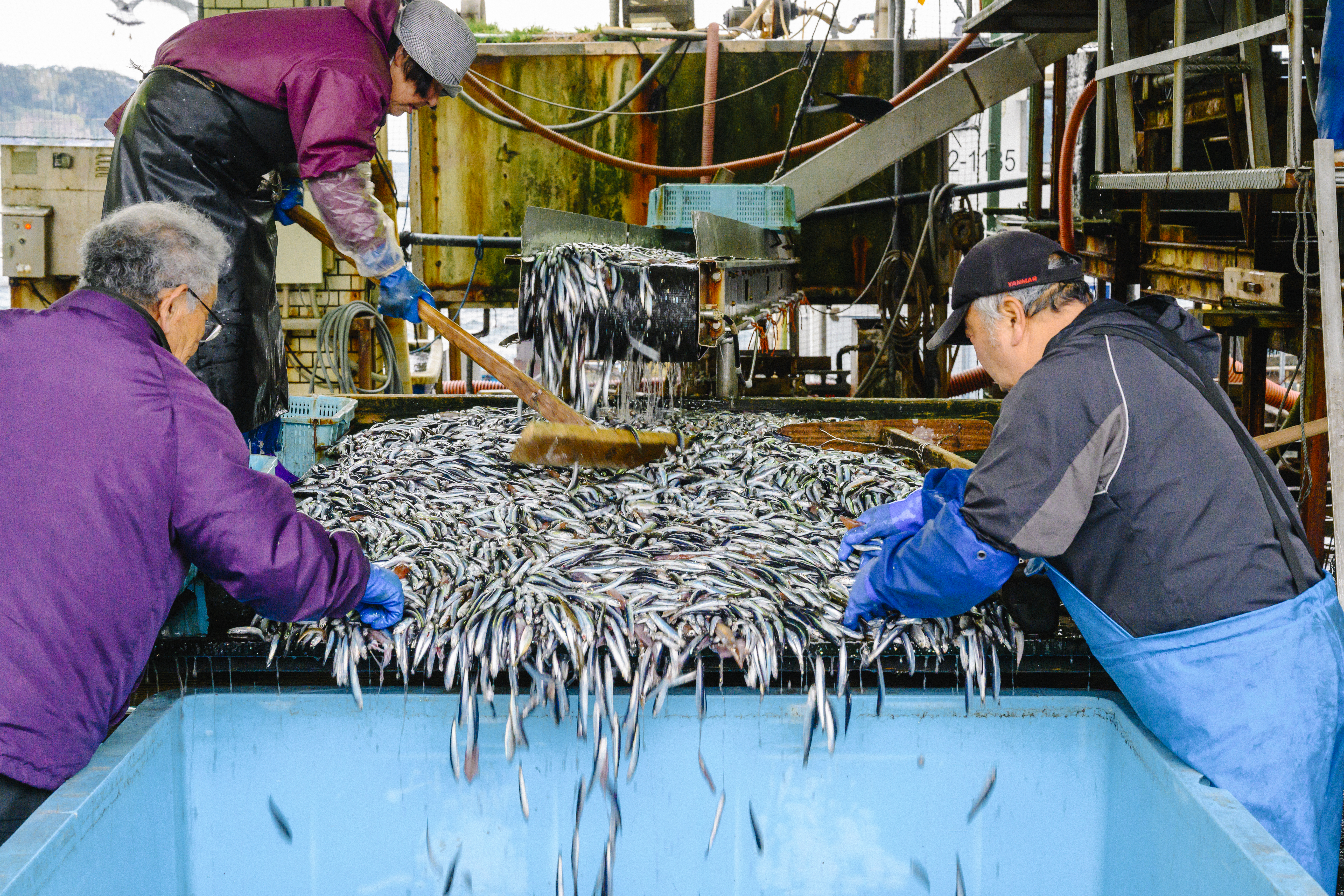 My journey at an end, I spend one last peaceful night in a converted funaya called Kura, lulled to sleep by the gentle lapping of the waves below my window. Then it’s time to return to the Kyoto that everybody knows – on the expressway this time. 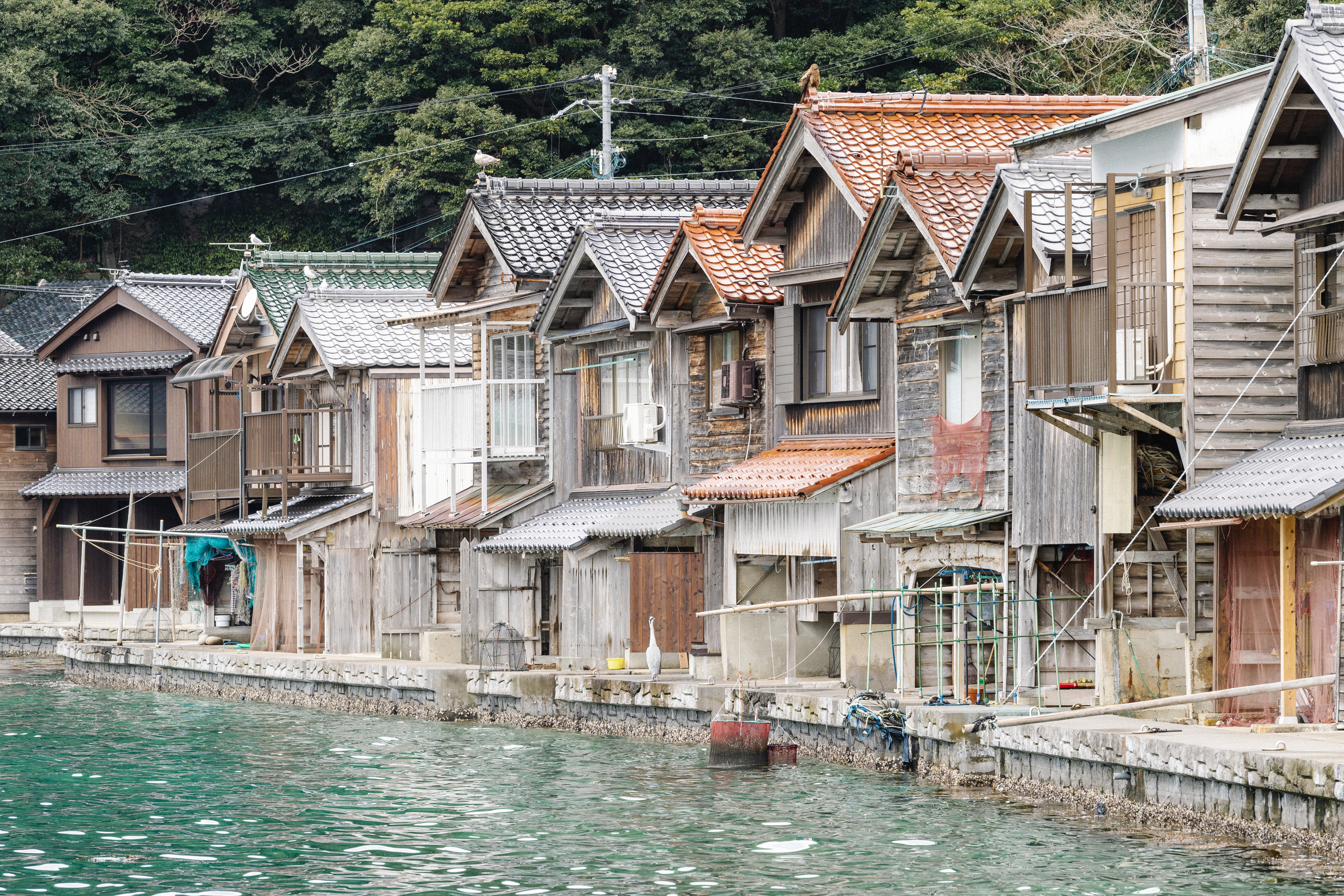 Where to stay in Kyoto Prefecture

Try a night or two in the city at the Hyatt Regency Kyoto where the rooms combine contemporary interiors with classic Japanese design – think headboards created with framed works of antique kimono fabric. 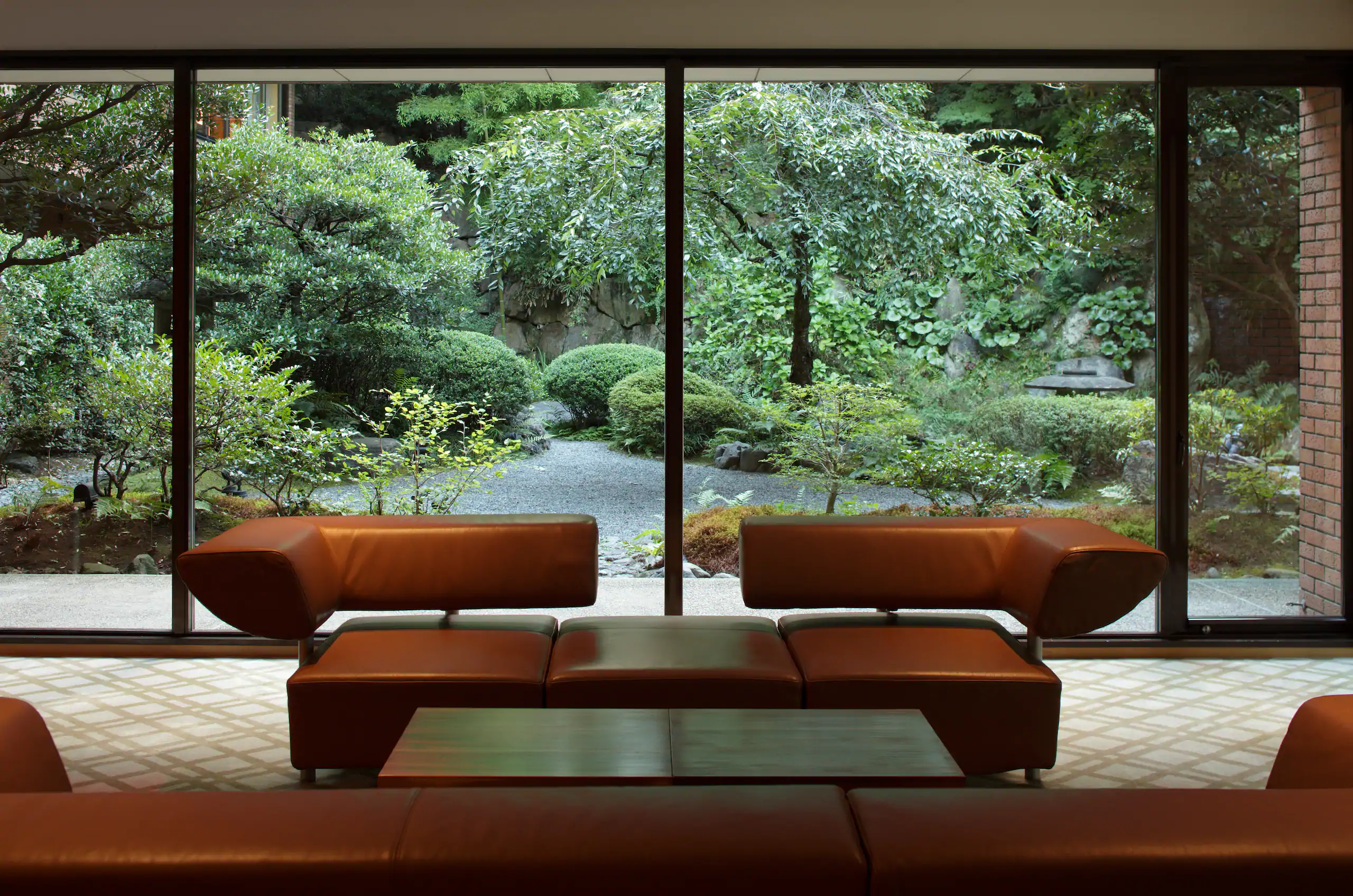 Several of Ine’s funaya have been tastefully converted into places to stay. Try Kura, where you can relax in your room’s ceramic bathtub as you gaze out at the comings and goings in the harbour. Ine-kura.com

In Yuhigaura, Yuzen offers guests not just the usual comfortable room and sumptuous meals but also the chance to take a “sand bath”: Wrapped in a robe, you lie down and get buried to your neck in hot sand. Yu-zen.com 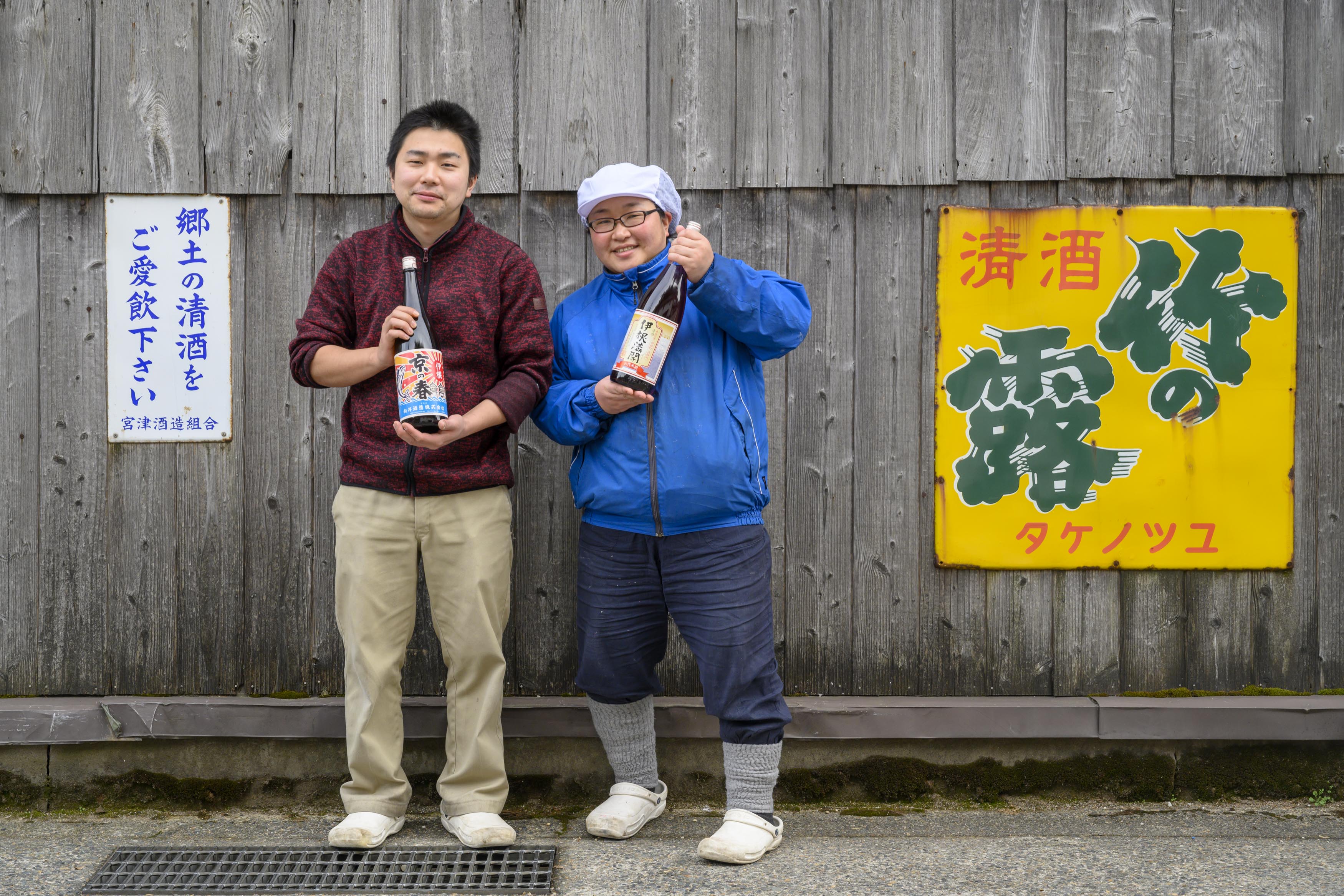 In the north of Kyoto Prefecture, Tango is home to the brewery Kinoshita Shuzo. The toji, or master brewer, is an Englishman, Philip Harper, the first foreigner to pass the qualification exam.  sake-tamagawa.com

The Mukai Shuzo brewery in Ine also has a trailblazing toji: Kuniko Mukai (pictured, in blue) is a woman. Among her innovative bottles is a pink sake called Ine Mankai, made with red rice. Kuramoto-mukai.jp

The Fushimi area of Kyoto is one of the country’s three most famous sake-producing areas, and Masuda Tokubee Shoten is the oldest of the two dozen breweries. Tsukinokatsura.com