By hitting the mat every day for a month, Vancouver resident Barb Sligl discovered exactly what makes her green city the wellness capital of Canada 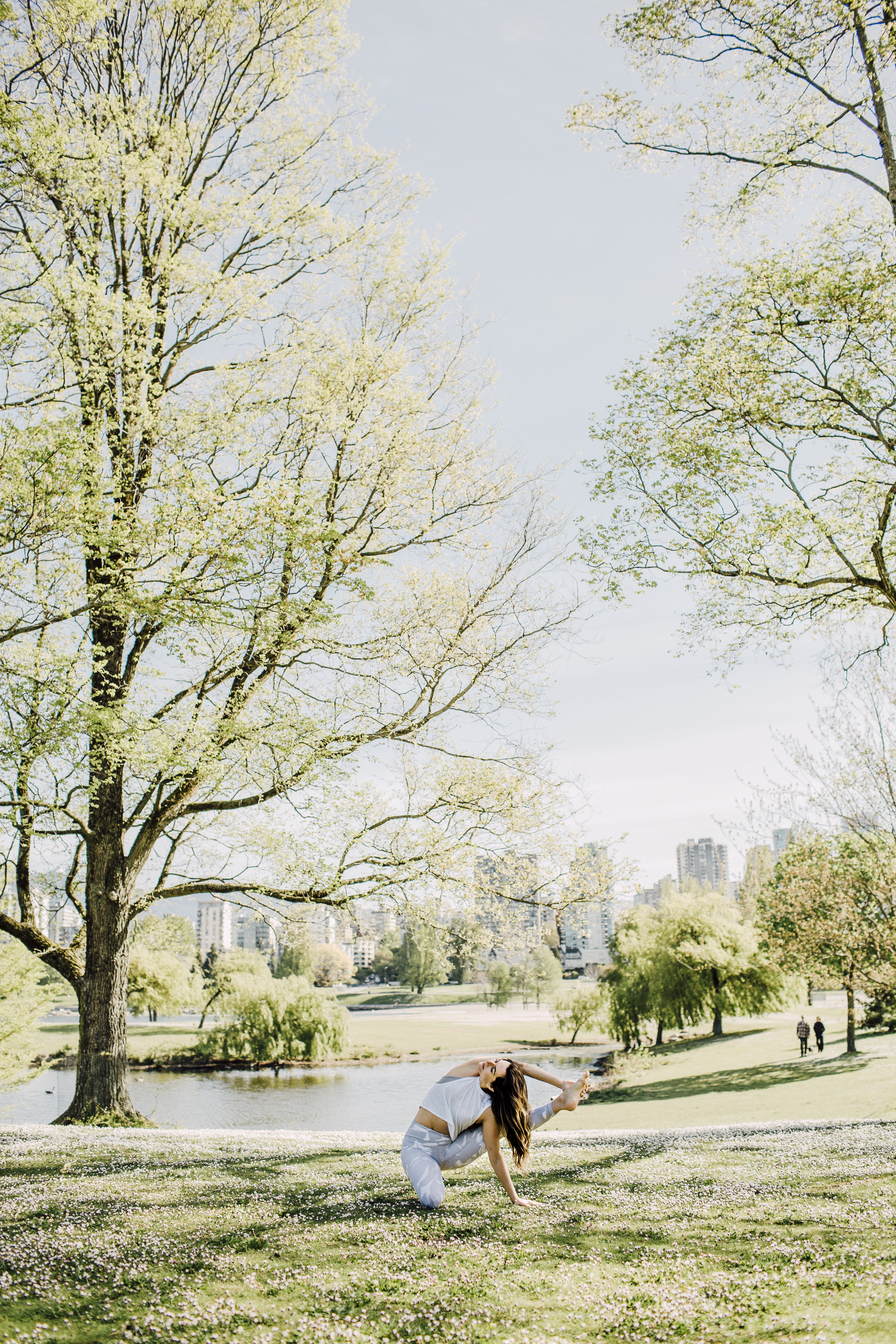 Nama slay every dang day. I read this play on “namaste” on a poster for a 30-days-of-yoga challenge in Vancouver, put on by Canada’s largest yoga company, YYoga. The annual event is something of a rite of passage in the city, one I’ve never done. I’ve toyed with yoga since I moved to the city two decades ago, but I want to get into a regular practice and finally “fly” in crow pose. So, this year I’ve signed up to “get it om”.

The city’s tie to its mountains, ocean, rainforest, its hippie culture – from crystals to hemp – and environmental activism (this is where Greenpeace started) has helped foster a yoga movement that’s grown far beyond the first yogis of the 1960s. In Canada at least, the ancient Indian practice has become synonymous with Vancouver. “Of all the places around the world I’ve travelled to and taught [in], the most yoga mats are carried around town here,” local yogi and teacher Christie Baumgartner observes. 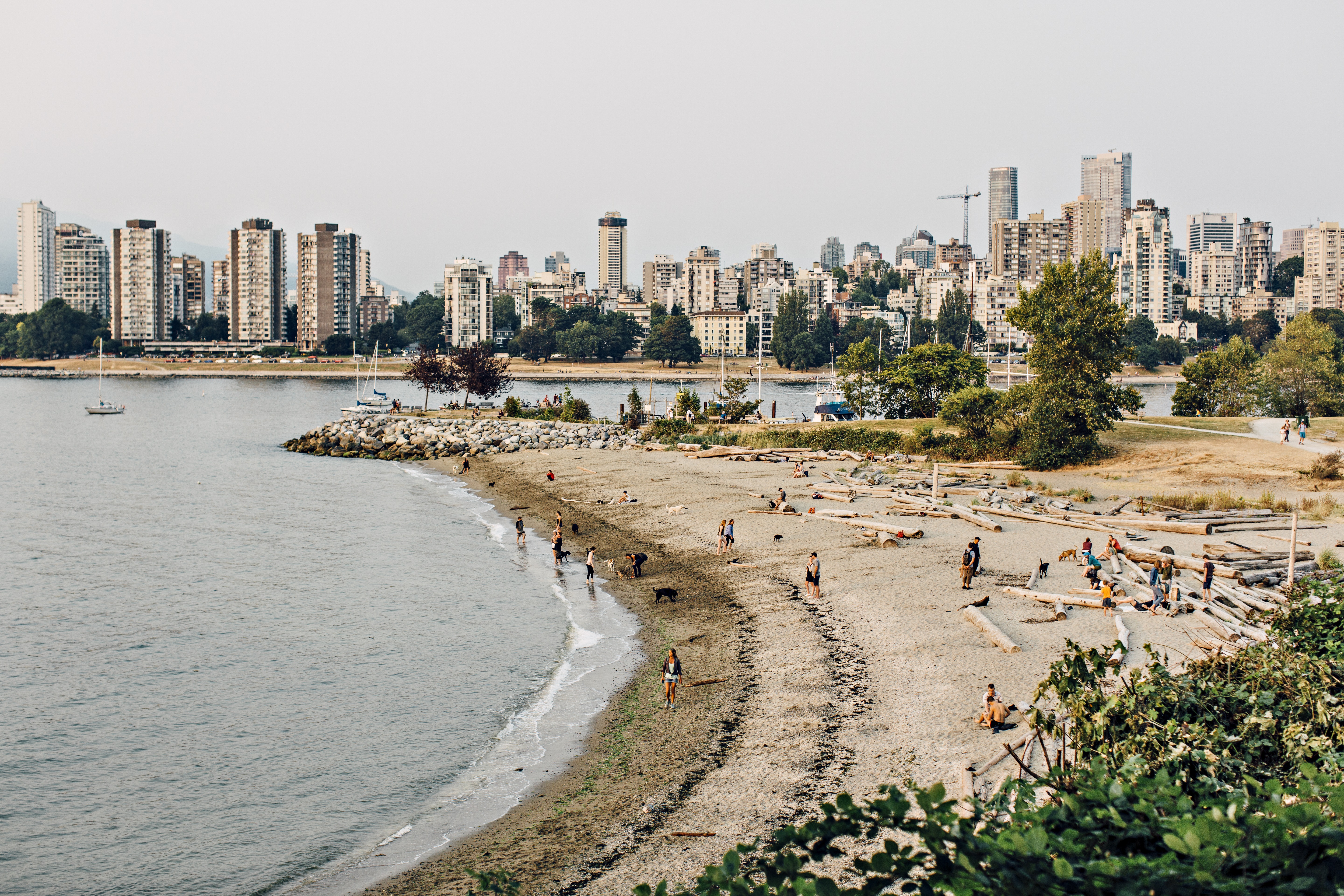 Different neighbourhood studios have different vibes, like One Yoga for the People in Gastown, Dharma Temple on Main Street in Mount Pleasant and Semperviva’s Sea Studio on Granville Island. Global yoga brand Lululemon was created and is still headquartered in Vancouver’s beachside neighbourhood of Kitsilano. Kits, as it’s known locally, was the epicentre of the hippie scene half a century ago, with laid-back coffee shops, alternative bookstores, record stores and artsy boutiques lining its main drag of West 4th Avenue. And that vibe is still omnipresent throughout the city. Besides brick-and-mortar hubs like the 10-studio YYoga, there are yoga classes on beaches, in parks and public squares. Grassroots community Mat Collective will run free outdoor classes from June through August, and there will be classes at Lululemon’s annual SeaWheeze festival in August. Beyond these highlights, there’s SUP yoga at the harbour and Liquid Yoga at the Westin Bayshore’s pool. There’s even snake yoga, during which a live boa constrictor or python wraps around your body, adding a weight component and encouraging you to be very still. 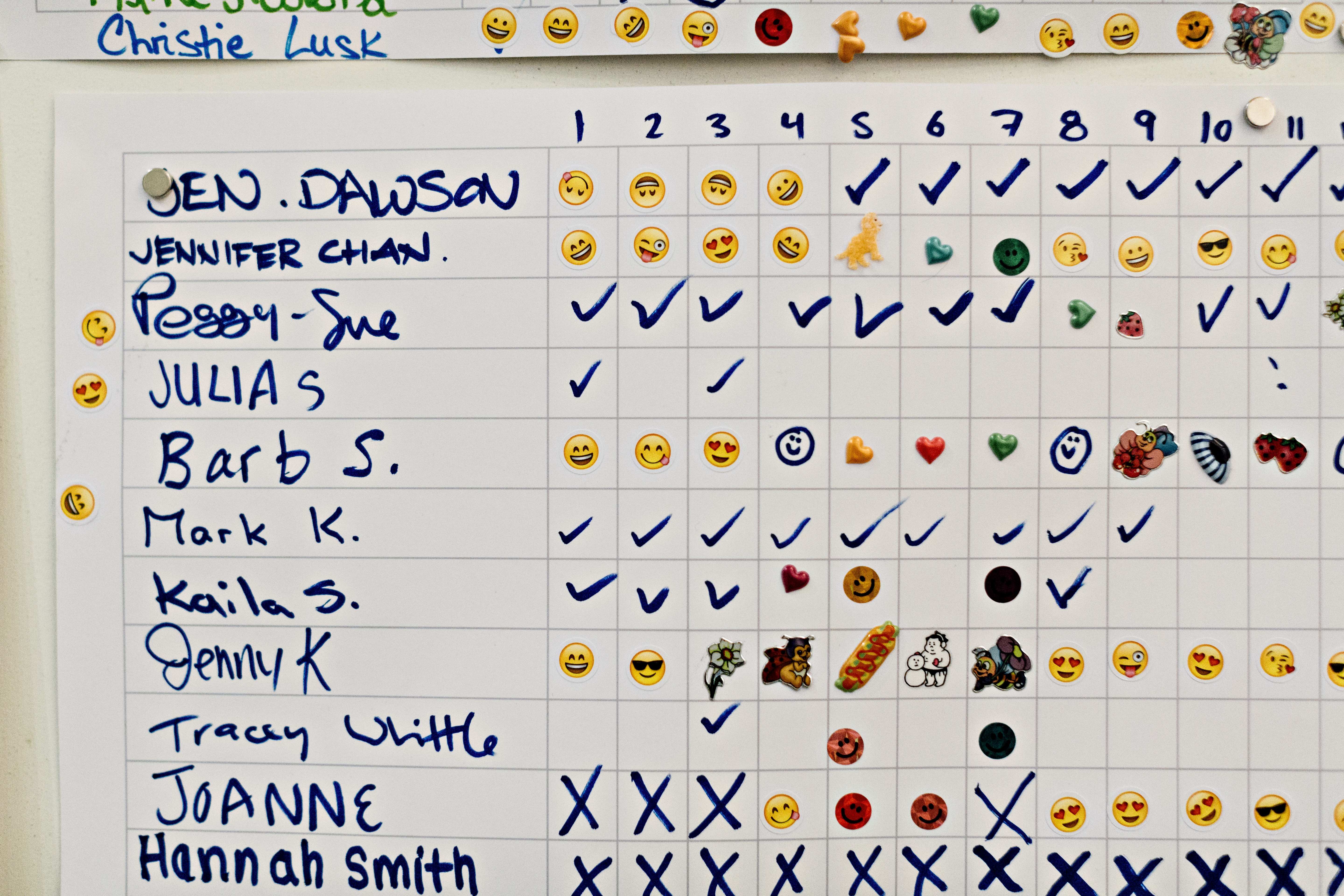 Although reptilian yoga isn’t part of my 30-day challenge, I’m still committed to 2,235 minutes of seven types of yoga in 33 consecutive classes with 20 teachers at three studios and one pool. I plan to take most of my classes at one of YYoga’s original locations that opened in 2008, Downtown Flow. It’s also the home studio of founder Terry McBride, who is naturally also signed up for the challenge. 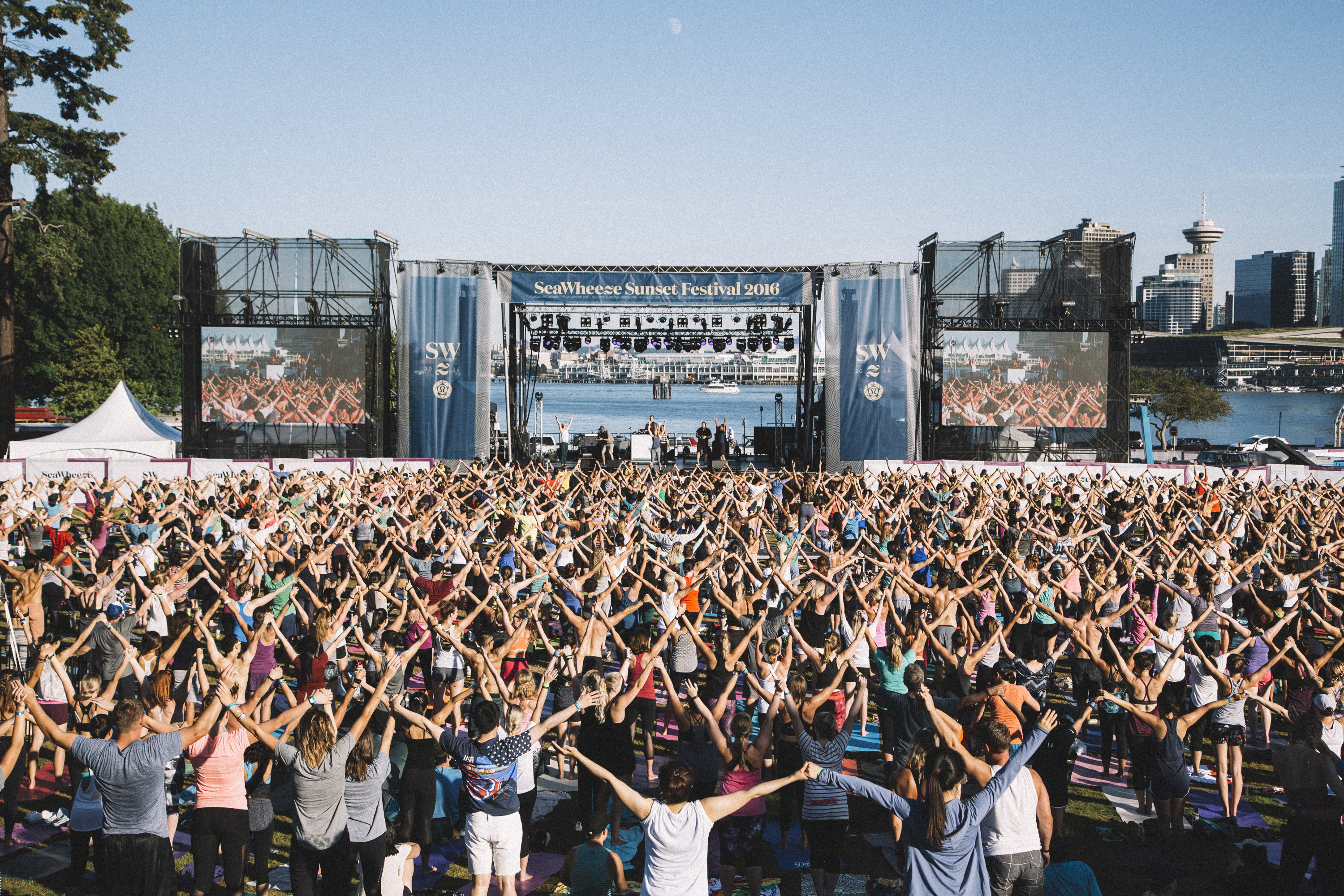 “Living in a rainforest, Vancouverites are very outdoorsy and connected to nature,” McBride tells me. “They are in tune with themselves when it comes to wellness and are willing to try new things and have different experiences.” Now, it’s my turn to get in the flow. 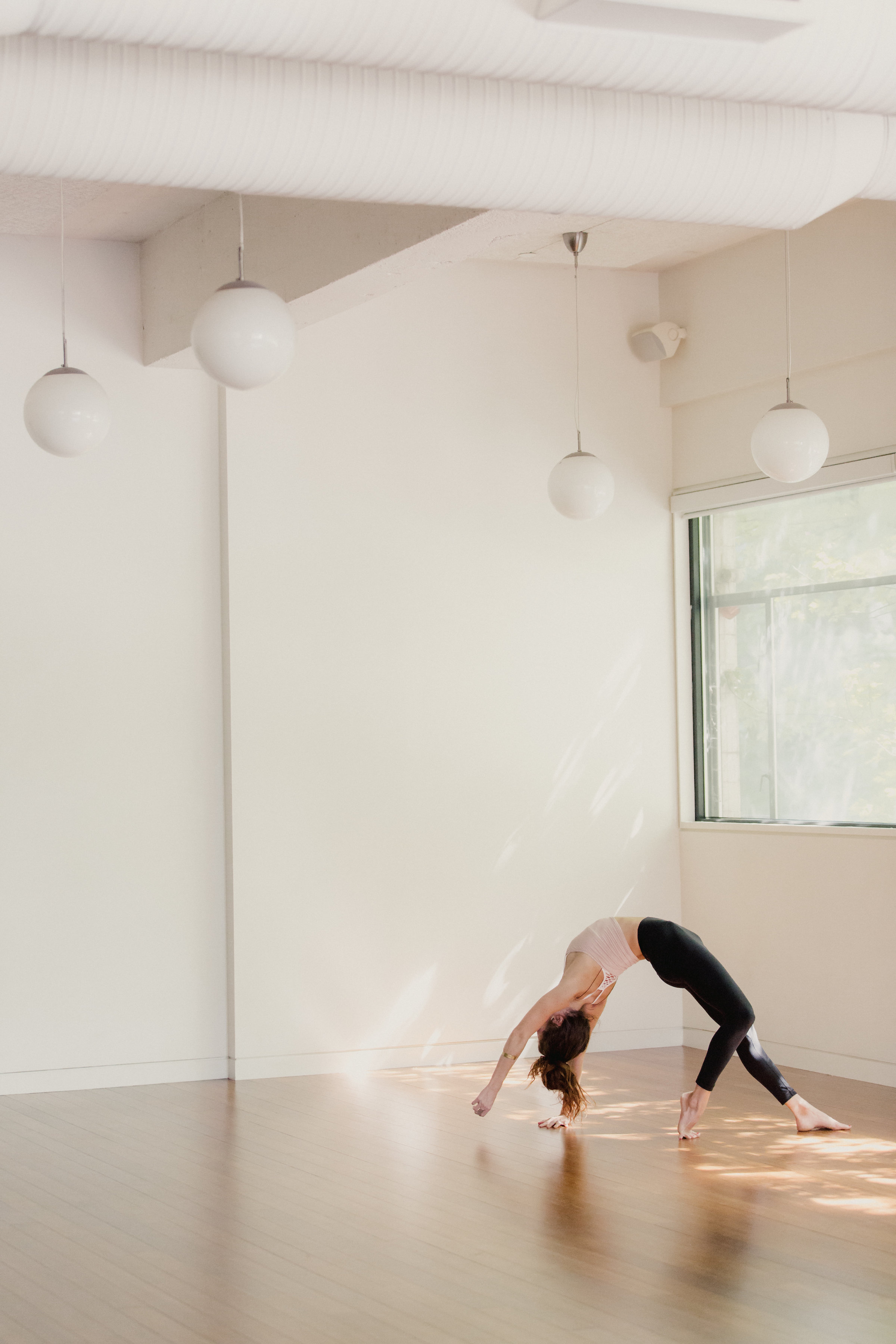 I start the challenge with a hot yoga class. It’s 40 degrees Celsius at Downtown Flow, near the nexus of Burrard and Robson streets in Vancouver’s busy core, and I’m sweating even before I get into my first pose. I squeeze my mat into a spot near the back of the packed Fire Room, away from the mirrored wall everyone faces. 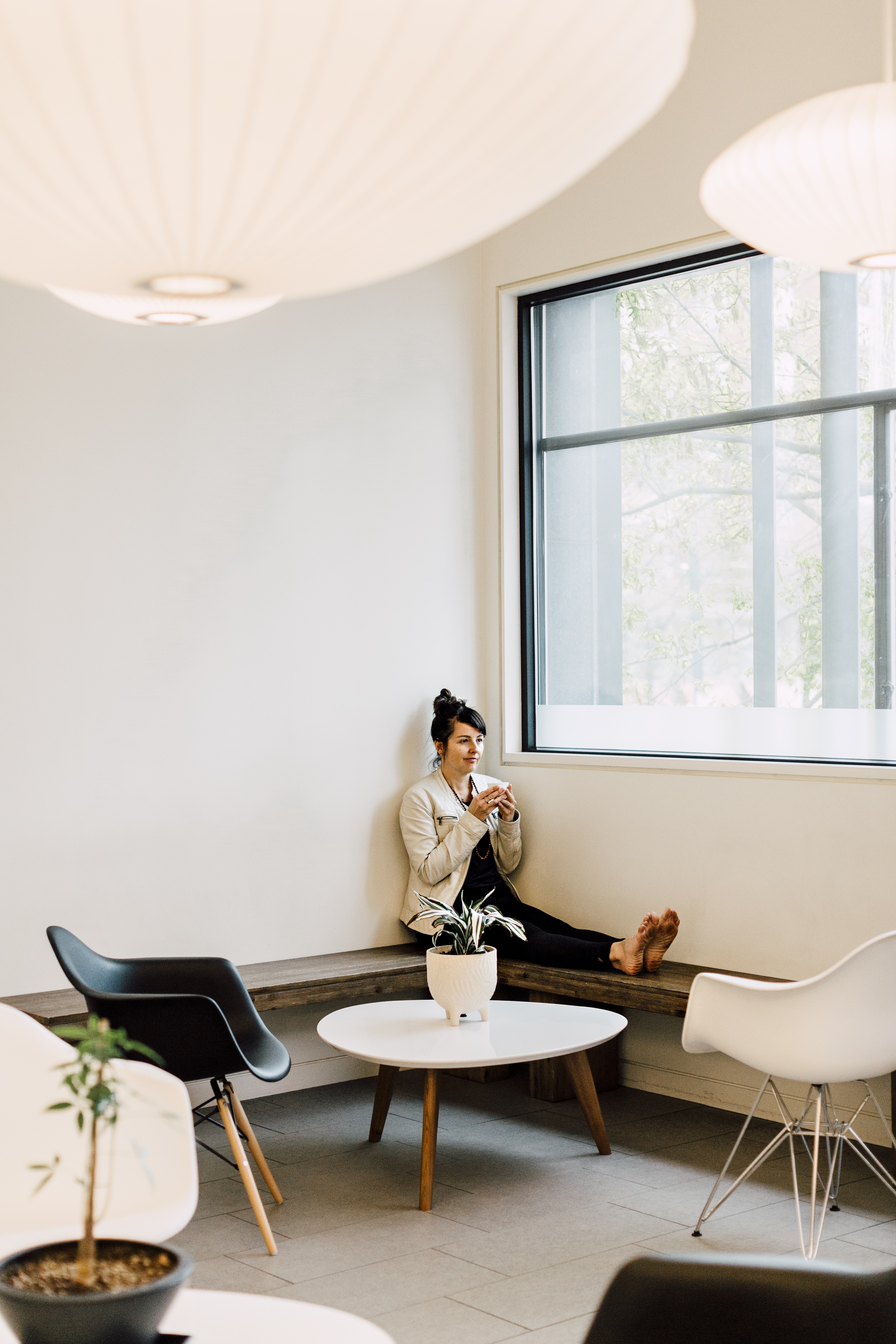 The class is a mix of young and old, toned and not-so-toned, experienced yogis and newbies alike – a microcosm of the city’s diverse mix of yoga devotees. When our teacher, Katherine Moore, asks who’s starting the 30-day challenge, a forest of arms goes up.

The standing poses crescendo with Natarajasana or the dancer – a beautiful combo of balance, flexibility, power – in which everyone is dripping. Moore tells us not to wipe off the streams of perspiration. “It’s your sweat. Embrace it.”

She also has some advice on tackling the 30-day endeavour: “What I love about the challenge is it teaches dedication, patience, willingness to try.” Moore, a competitive runner and Lululemon alumni ambassador, elaborates on these three key elements of yoga. “You gain the patience to meet yourself where you are at in the moment. Even if you don’t get it right away, you plant a seed that will continue to grow.”

I feel encouraged by this as we lower into Malasana. This deep yogi squat is the starting point for Kakasana or crow, the pose that’s been on my mind for a while. I venture a bit further, placing my palms on the floor and tilting forward to that elusive point when my arms and hands become the legs of a bird and my legs are folded and raised like wings. I can’t quite lift myself up into the full expression of the pose today. But as Moore says, I’m planting the seed for my attempt at flight.

Afterwards, I sip some organic cacao tea in the minimalist, serene lounge overlooking busy Burrard Street; I settle beside a statue of Ganesha and watch the traffic below and people rushing by in business suits or yoga gear. On my way home, I stop at a Lululemon store to browse sticky yoga mats for all the sweaty hot yoga classes in my near future. 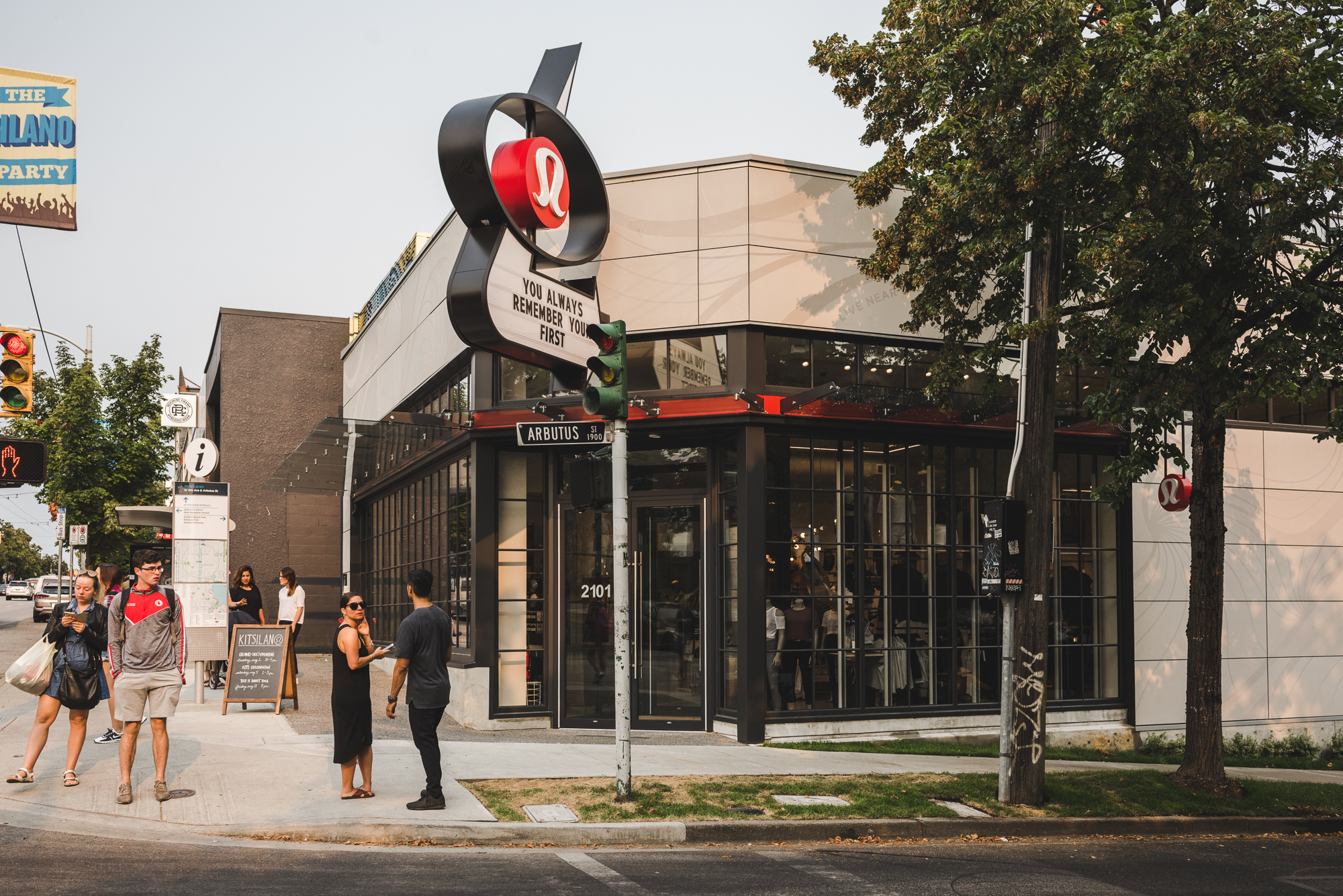 Barely at the halfway mark, the challenge is taking its physical toll. I go to bed early, even on weekends. I’ve been strategising my classes during the past week, countering an intense 90-minute power class with a 30-minute meditation class. I also take a gentler Hatha class and try a slow-and-still Yin class. Each one is another bead to thread on this 30-day challenge.

To get to today’s flow or Vinyasa-style class, I walk a kilometre from my West End home in the city centre. This daily ritual to my go-to downtown studio has become a meditative prelude to class, and I almost feel like I recognise the same resident crows hop from grass to concrete and back again. 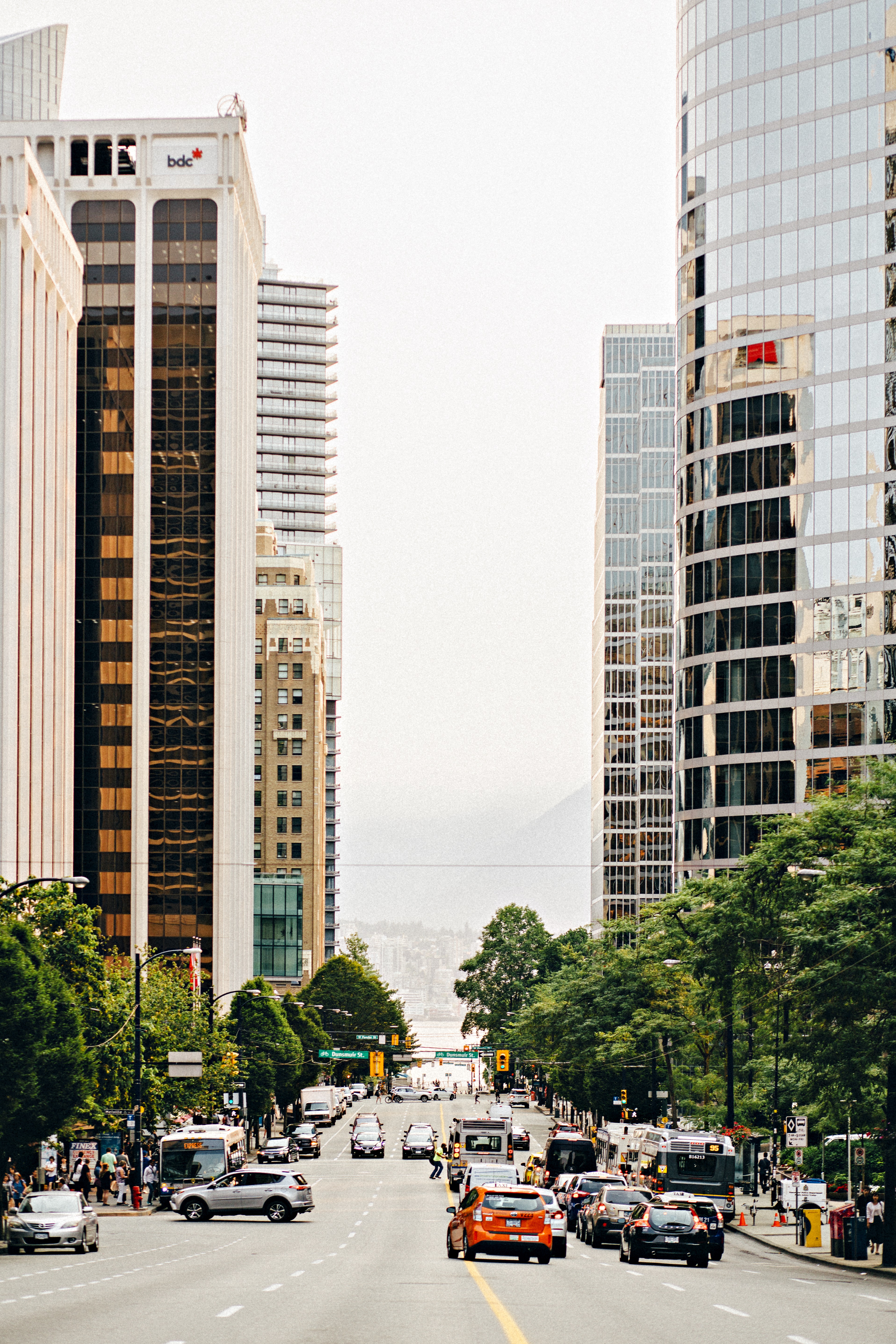 In class, teacher Stephanie Trembath guides us through a sequence that yogis are familiar with, a version of the Surya Namaskara or sun salutation. But the participants rush through downward and upward dog and pre-empt the poses. Trembath reminds us to not anticipate – listen, trust, be in the moment. Yoga is the here and now. I try to hold on to that nugget of wisdom as my mind strays wearily to the 18 more days I have left of the challenge. 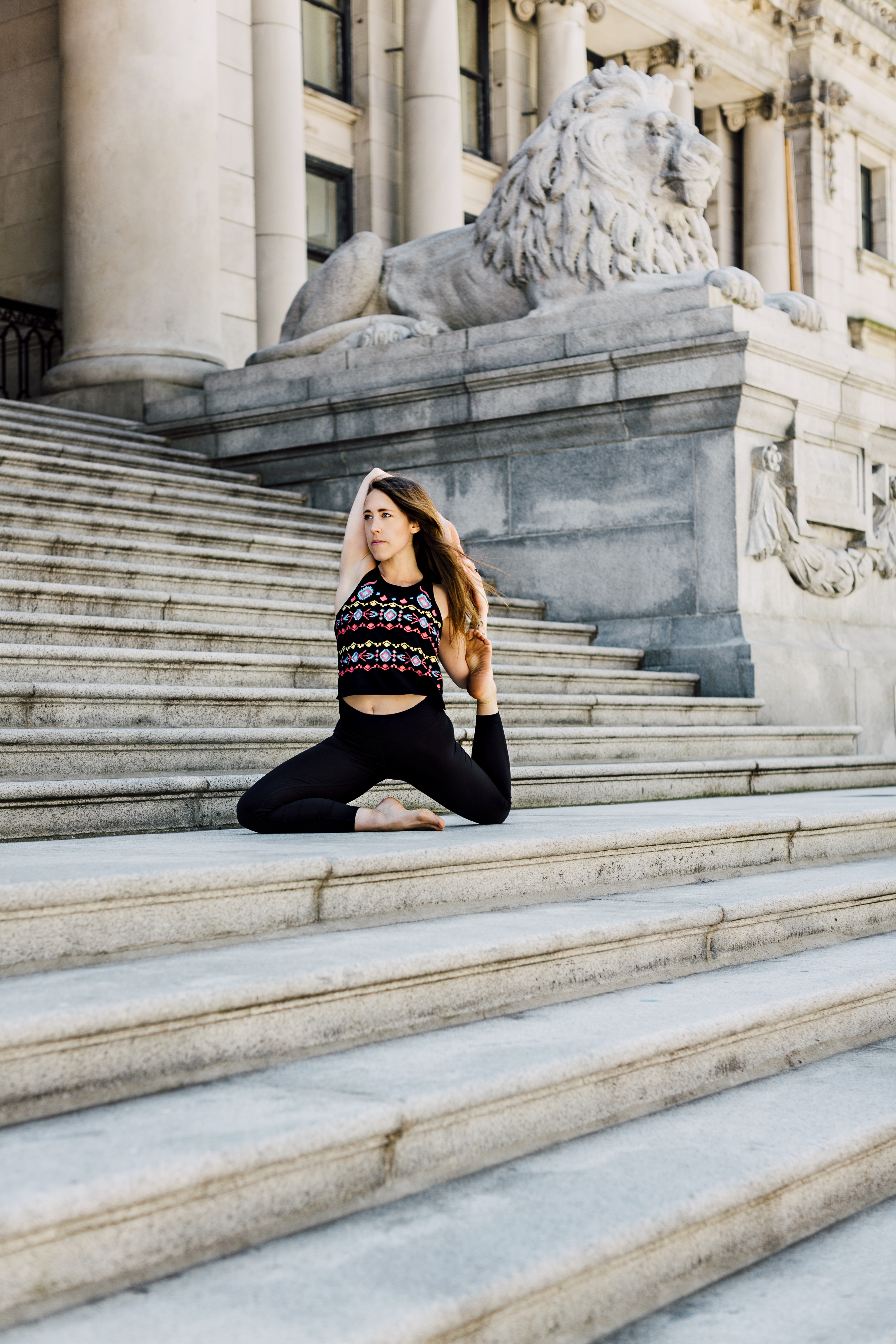 Near the end, there’s a moment in class to give the crow another honest effort. I wonder if this could be Vancouver’s pose, given its 6,000 black-feathered denizens that perform a nightly, cacophonous migration to roost in the city’s east end. I pitch forward and stay aloft for just a nano-second – a minor victory. 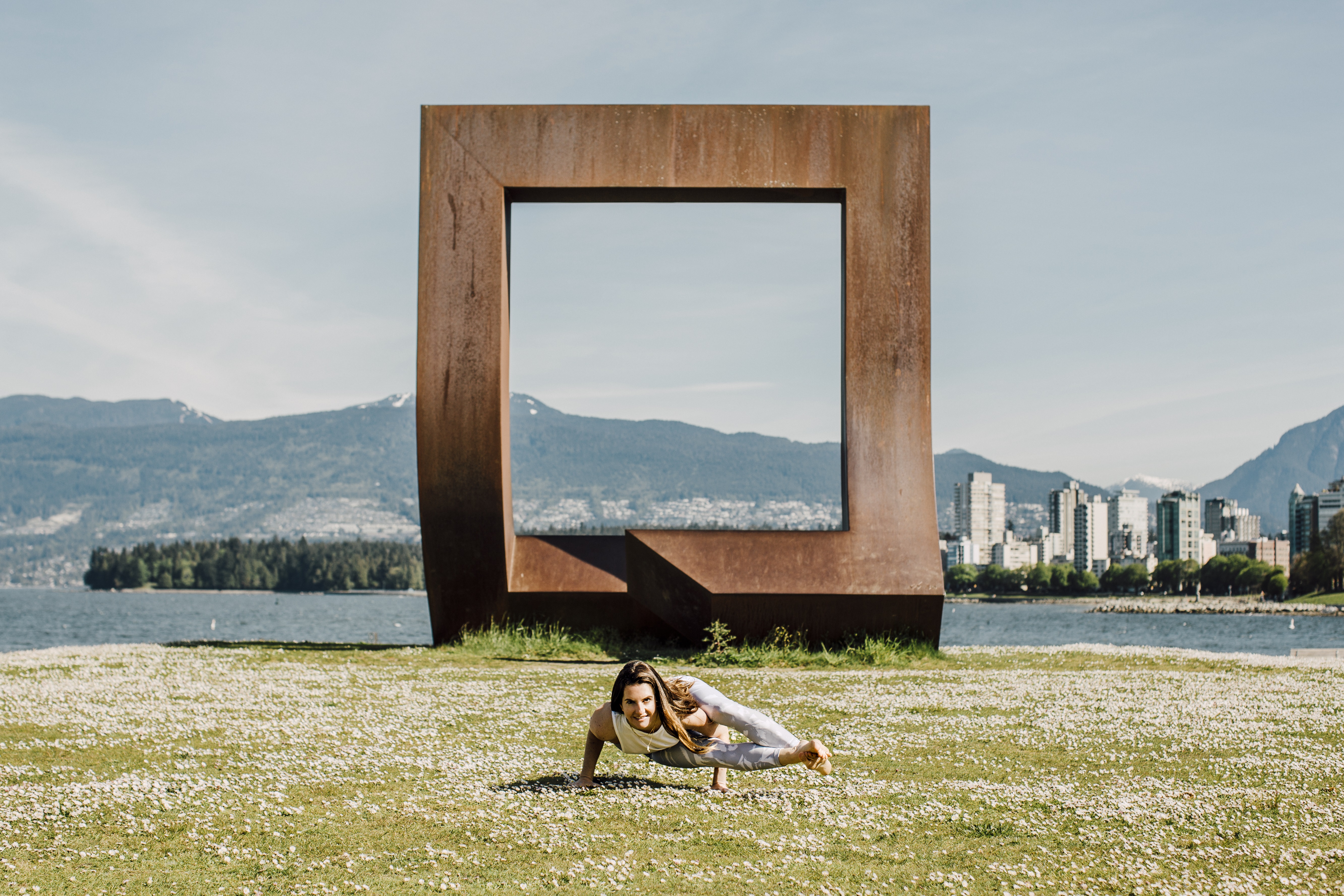 Just five days shy of completing the challenge, I feel much stronger than when I started. In a power class, a challenging sequence of poses done in a room heated to 32 degrees Celsius, I’m stretched into a new super-pose: Ardha Visvamitrasana or the sage. It’s a low-to-the-floor arm balance, standing pose and twist rolled together, with one leg somehow raised parallel to floor.

Christie Baumgartner is leading this class. She has taught a wide range of Vancouverites: 2,000 people on Kits Beach to celebrate Lululemon’s SeaWheeze half-marathon, hundreds of athletes on the football field at the University of British Columbia, the Vancouver Canucks hockey team and even a group of teens from an alternative high school in East Vancouver.

She builds a sequence of asanas and vinyasas to bring us into the elusive sage pose. I configure myself into something that barely resembles half a sage, but even my warped version feels like an achievement. If I can attempt a pose that I didn’t even know existed before this class, then perhaps lifting off in crow is closer than I think.

I do another class in the same day, Liquid Yoga at the Westin Bayshore’s pool by the city seawall. Liquid Yoga started as stand-up paddleboard yoga in places like Third Beach in Stanley Park and Deep Cove in Burrard Inlet, as a way to combine locals’ love of nature and yoga with the extra challenge of moving with the water.

I get low into the preparatory yogi squat on my floating mat and attempt to balance while becoming as light as a bird skimming the water’s surface. But being afloat and aloft at the same time is beyond me – it’s a struggle to not belly flop, and the final supine pose, Shavasana, feels wonderfully adrift.

I end as I began, with hot yoga. I ride my bike to YYoga’s Kits studio, over the almost-100-year-old Burrard Bridge that spans False Creek, which spills into downtown from English Bay. I’ve become that iconic Vancouverite, speeding down a bike lane to get to a yoga class, mat slung across my back.

For 30 days, I’ve sweated, pushed myself and tested my willingness. Almost every class has had a moment to “fly” in the crow pose. Despite a face plant or two along the way, I’ve kept pressing my palms against the floor in valiant attempts. I may not have mastered the feat, but today I get a rush of adrenaline in another pose I tried on Day 1 – I see my toes peek past the crown of my head in Natarajasana, or the dancer pose. 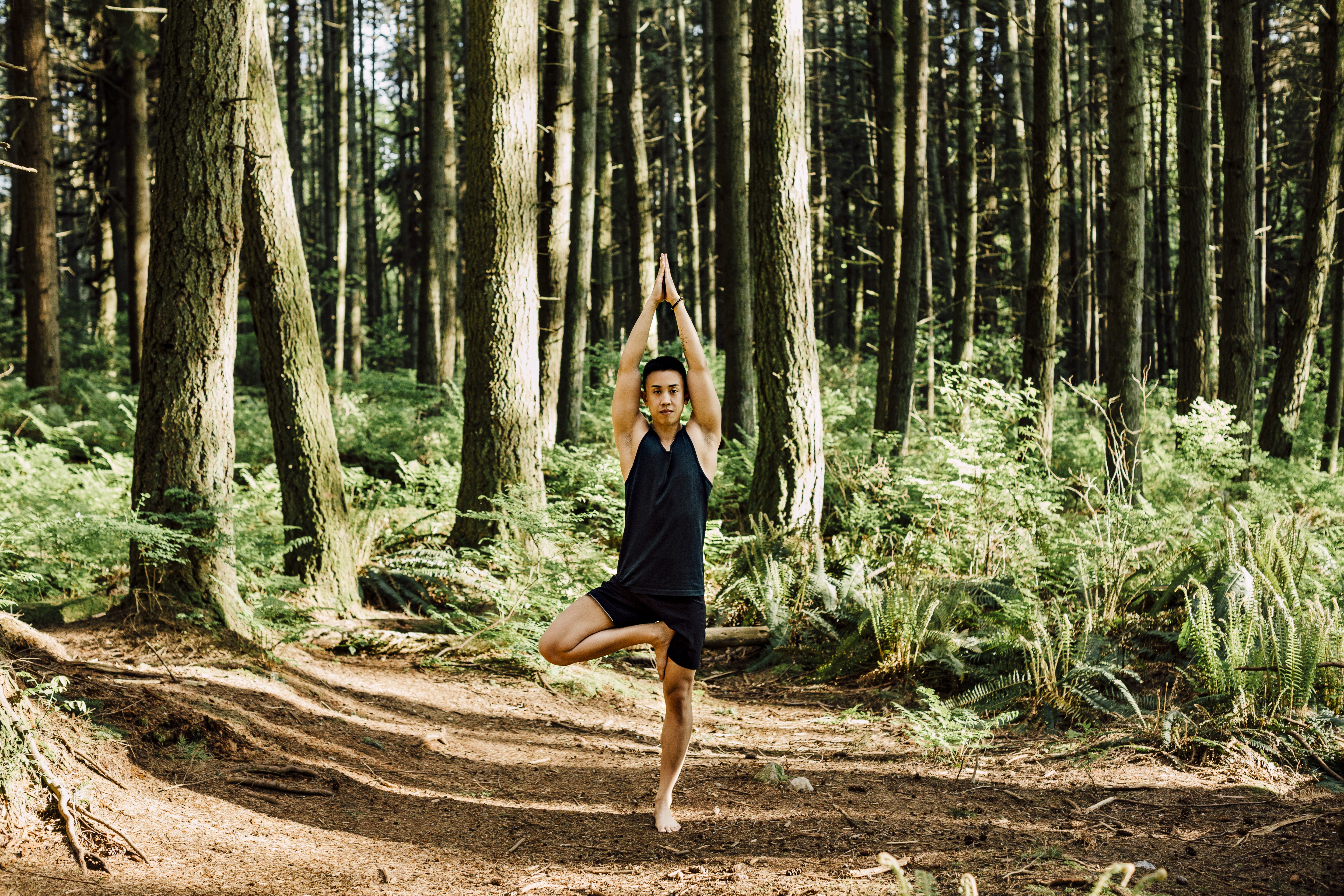 Our teacher, Marcus Tong, celebrates both his practice and Vancouver on his Instagram account, with beautiful photos of impressive poses in outdoor locales. To him, the city’s quintessential move is Vrksasana or tree pose. “Tree pose reflects balance, strength, calmness, everything Vancouver encompasses,” he tells me.

I agree. I feel steady, towering and peaceful when I transform into the tree, channelling the ancient wisdom of the city’s urban forest. Still, Vancouver’s crows call to me with an incessant “caw, caw” and I know this isn’t the end of my new practice.

Upcoming Vancouver yoga events to pencil in your diary 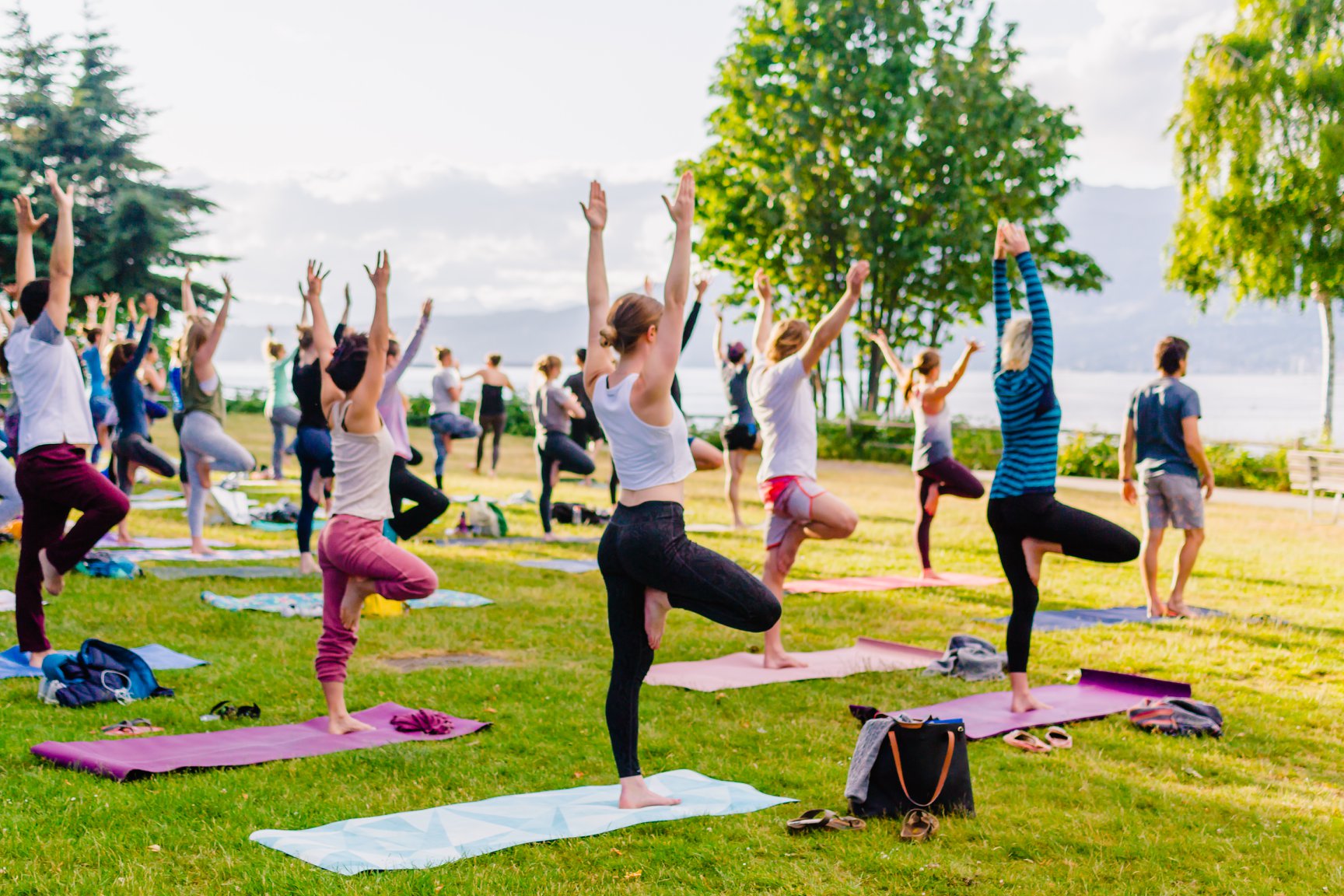 What began as a yoga mat recycling programme has grown into a seasonal series of free daily yoga classes in must-see spots around the city, from Vancouver Art Gallery to Kits Beach. matcollective.com 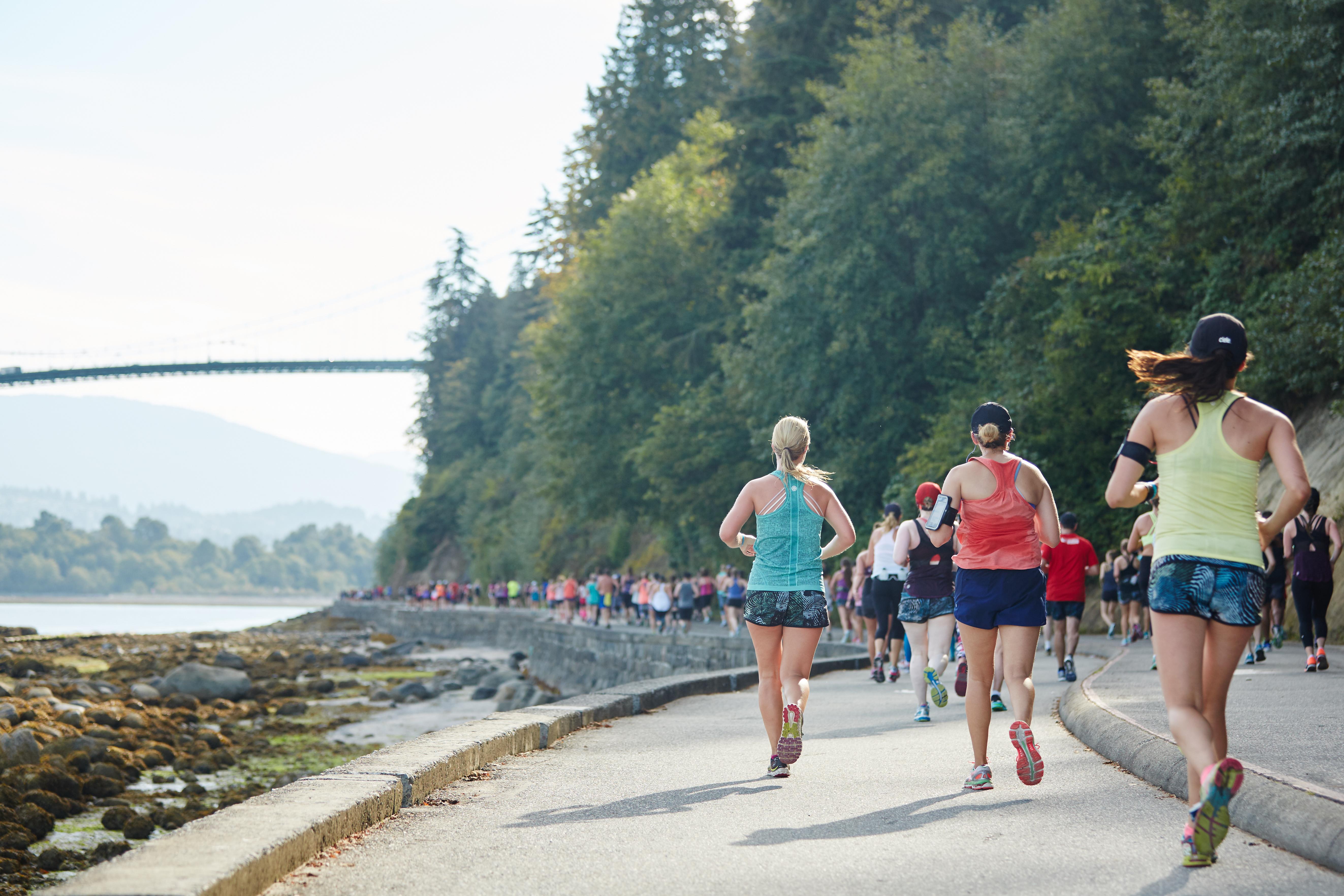 Organised by Lululemon, SeaWheeze celebrates the brand’s roots in the Pacific Northwest with a half-marathon and a massive communal yoga practice. seawheeze.com

Get it om atop Grouse Mountain. Overlooking downtown Vancouver and English Bay, the YYoga classes take place on Saturday mornings throughout the summer. yyoga.ca 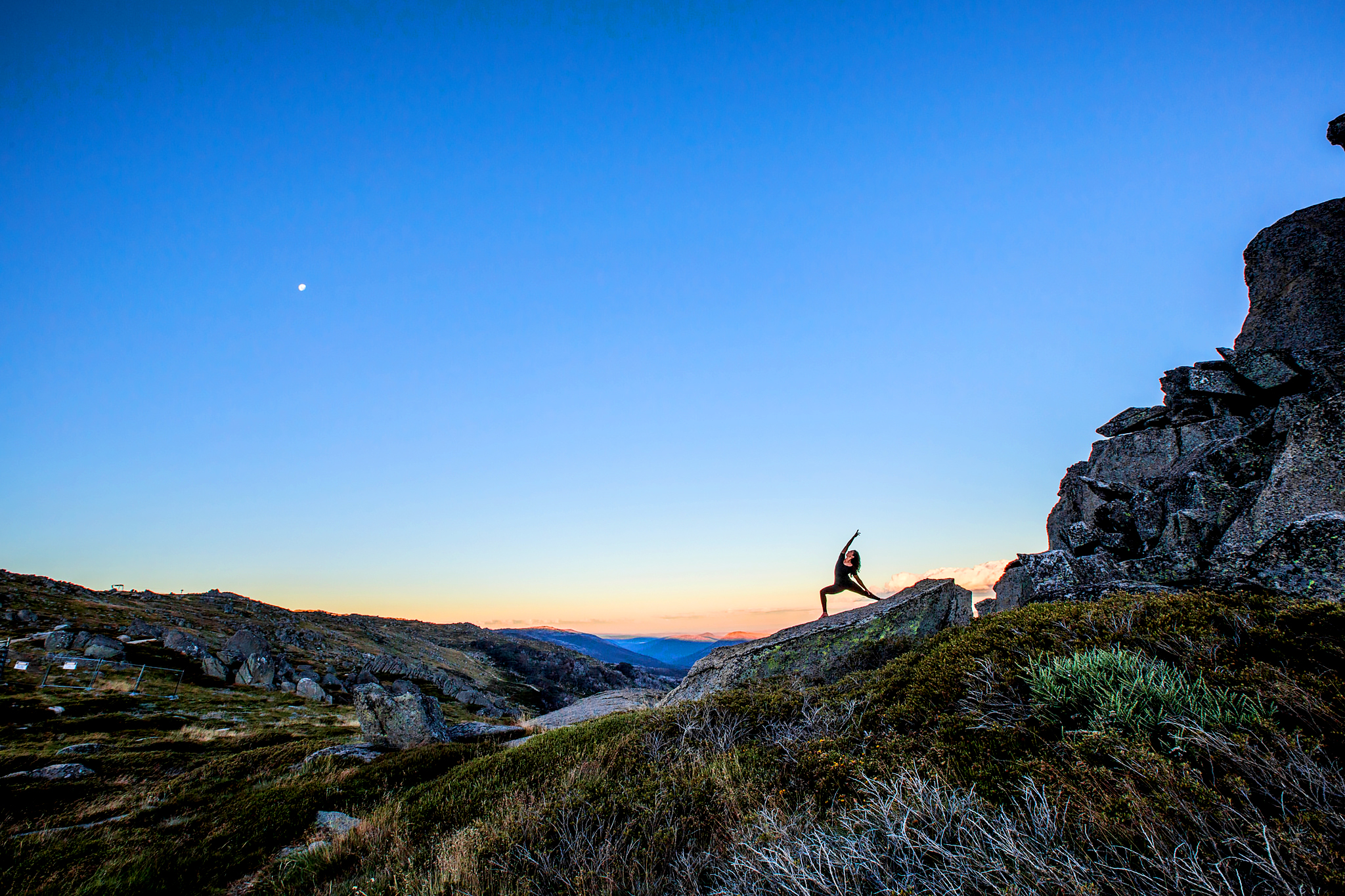 In the resort village of Whistler, north of Vancouver, mountains and glaciers are the backdrop of the Wanderlust festival, an immersive, summer-camp-like celebration of yoga. wanderlust.com/festivals/whistler

Number of teachers who taught her during the challenge