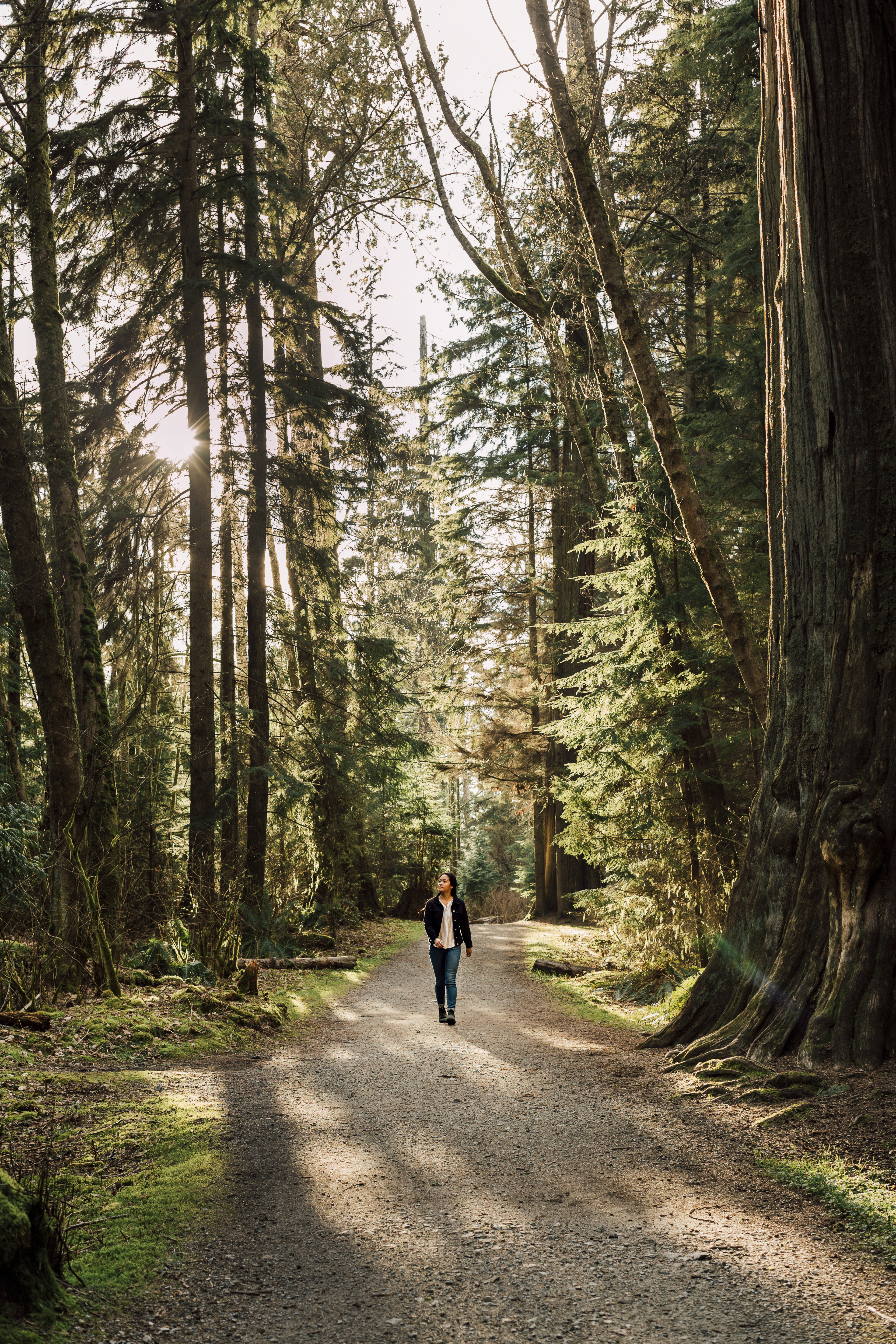 Under a canopy of incandescent green, I stop mid-jog to look up. Way up. I stand in miniature next to 600-year-old trees on Tatlow Trail, giants that mark my running route in Stanley Park. Silent, soaring sentinels, these western red cedars are so wide that my arms span a mere third of their solid, grey flanks. I touch one cedar’s furrowed and frayed bark. “Hello, tree,” I whisper, as I breathe in its spicy, resinous scent. Then I continue my run, visiting the cedar’s kin – Douglas fir, western hemlock, Sitka spruce – deeper within this urban forest.

This 400ha swathe of nature is just north of downtown Vancouver’s West End, where gleaming skyscrapers press against it. The rest is surrounded by water; the conifer-cloaked peninsula juts into the Burrard Inlet that stretches into British Columbia from the Pacific Ocean. Designated a park in 1888, Stanley is the city’s oldest and one of the world’s largest (and favourite; it’s number one on a TripAdvisor list of world parks). It’s my backyard – and the last stand of old-growth rainforest in Canada’s third-largest city. 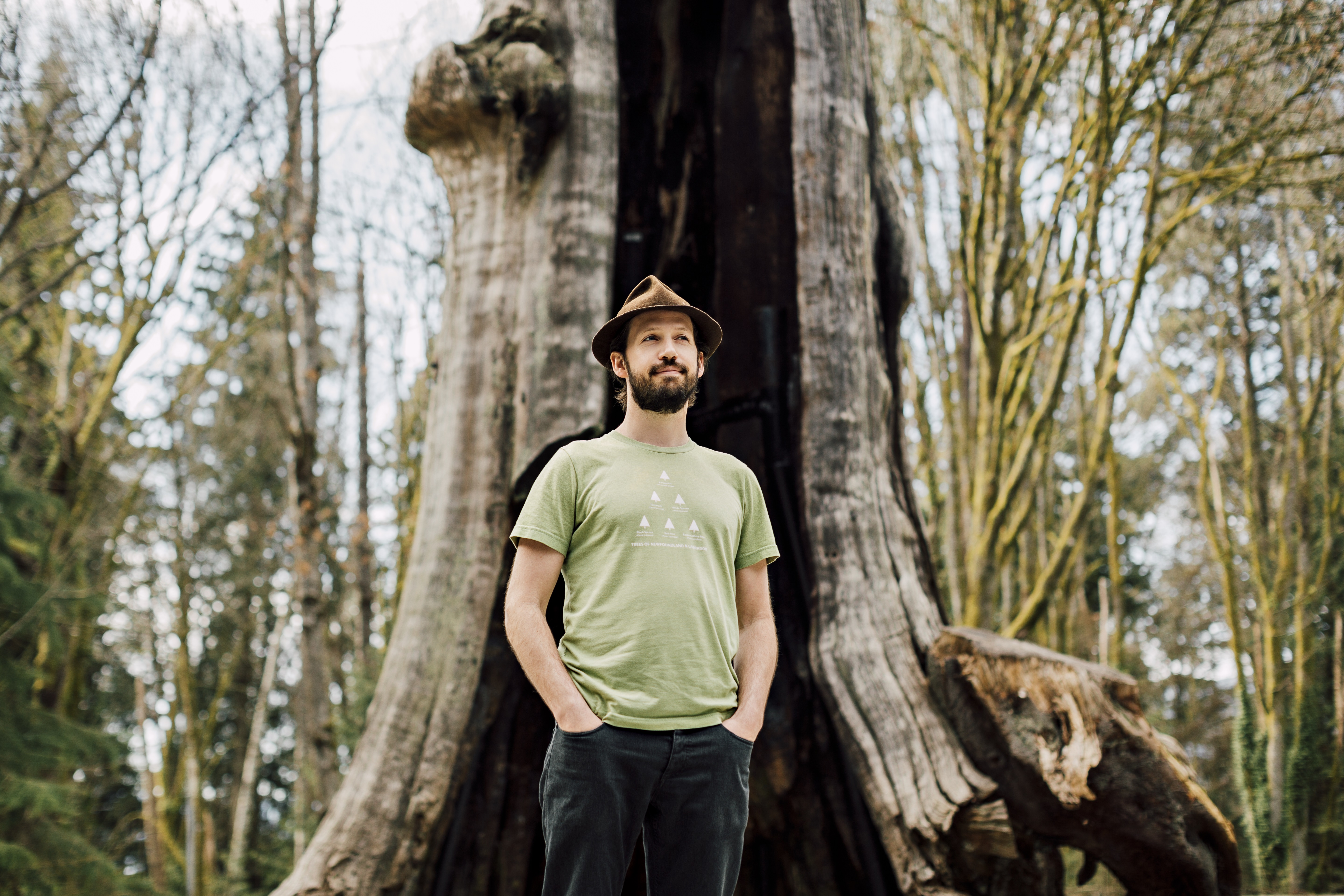 “There’s nothing that really compares to Stanley Park,” says Ira Sutherland, a PhD student in the Faculty of Forestry at the University of British Columbia. He recently gave a TEDxUBC talk titled The Great Vancouver Forest: A Story of Place. “It’s literally at the edge of downtown. It’s big. It’s about 50% forest and about half of that is old growth. And within that old growth, you’ve got the largest maple tree and largest red alder tree in British Columbia,” he says. “You’ve got 600-year-old western red cedars, including trees that have been featured in National Geographic. And you’ve also got Douglas firs that are maybe 500 years old.”

I knew this part of the west coast was special, but it’s more than that. It’s also a poster child of the city and its visionary Urban Forest Strategy, along with its larger Greenest City 2020 Action Plan which has set out to hit ambitious goals related to zero carbon, zero waste and healthy ecosystems. 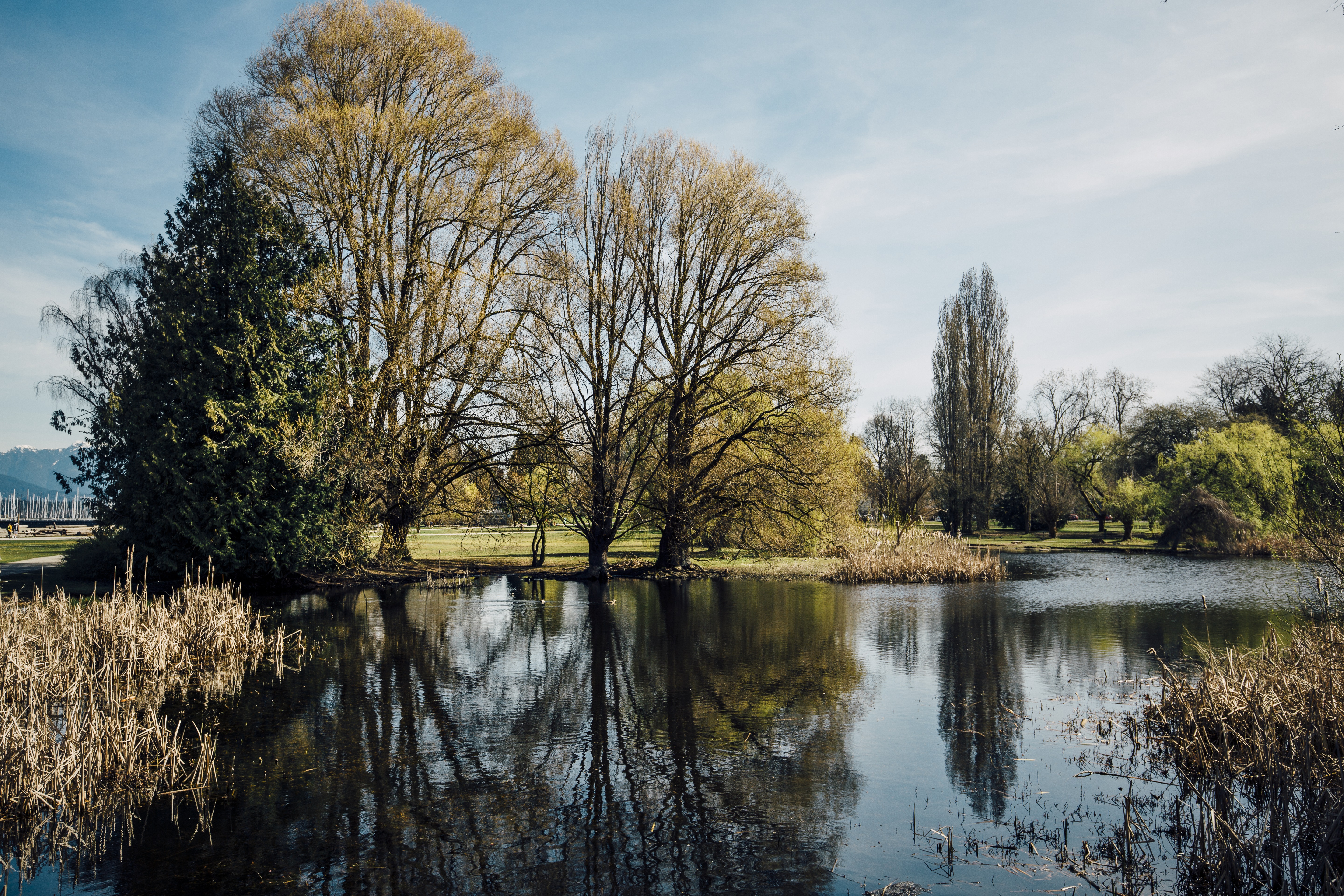 “Trees are central to the identity of Vancouver,” says Dave Demers, vice chair of the Vancouver Board of Parks & Recreation. “Carved out of a giant coastal forest, this city has always been a bastion of horticulture and arboriculture, a city at one with nature.” And when a study showed that Vancouver’s urban forest canopy had shrunk from 22.5% to 18%, it triggered bold action in 2011, including the commitment to plant 150,000 trees by 2020, “a goal I’m happy to say we should meet,” says Demers. 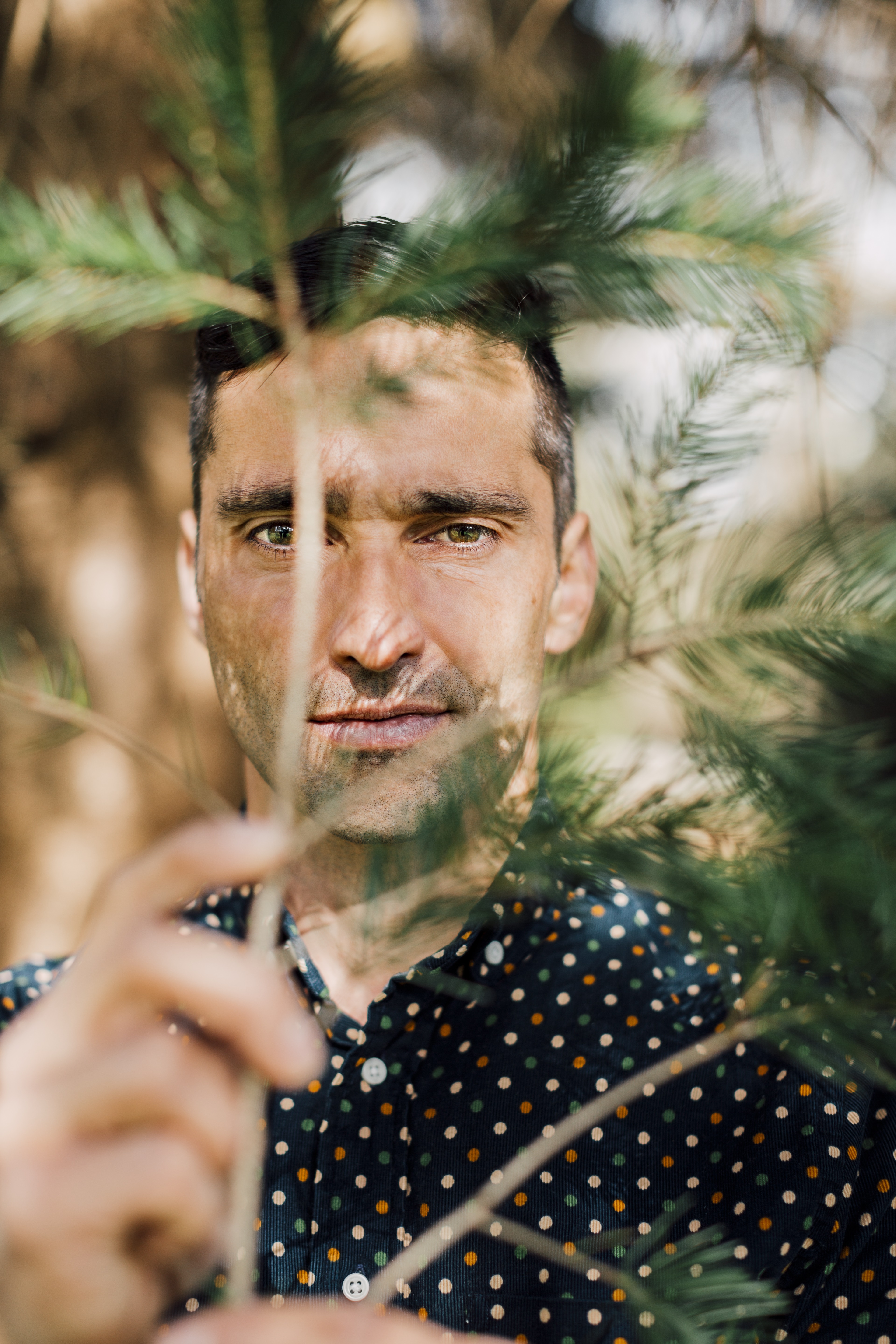 The push to direct public awareness to the urban forest has even included an email-a-tree project at another of the city’s 230 parks. Last year, trees in Jericho Beach Park were tagged and people were encouraged to send them a message. One email, sent to a sequoia, read: “It’s nice to think that you were here before me and that you’ll be here long after me. While we’re all running around, you’re making the world a better place by existing.” The trees then shared their stories – via human respondents that included a historian, horticulturalist, poet and Indigenous herbalist – like this Douglas fir’s wistful reply about its 90m-high ancestors: “All of us standing tall together reaching up to the sun, that would have been spectacular.” 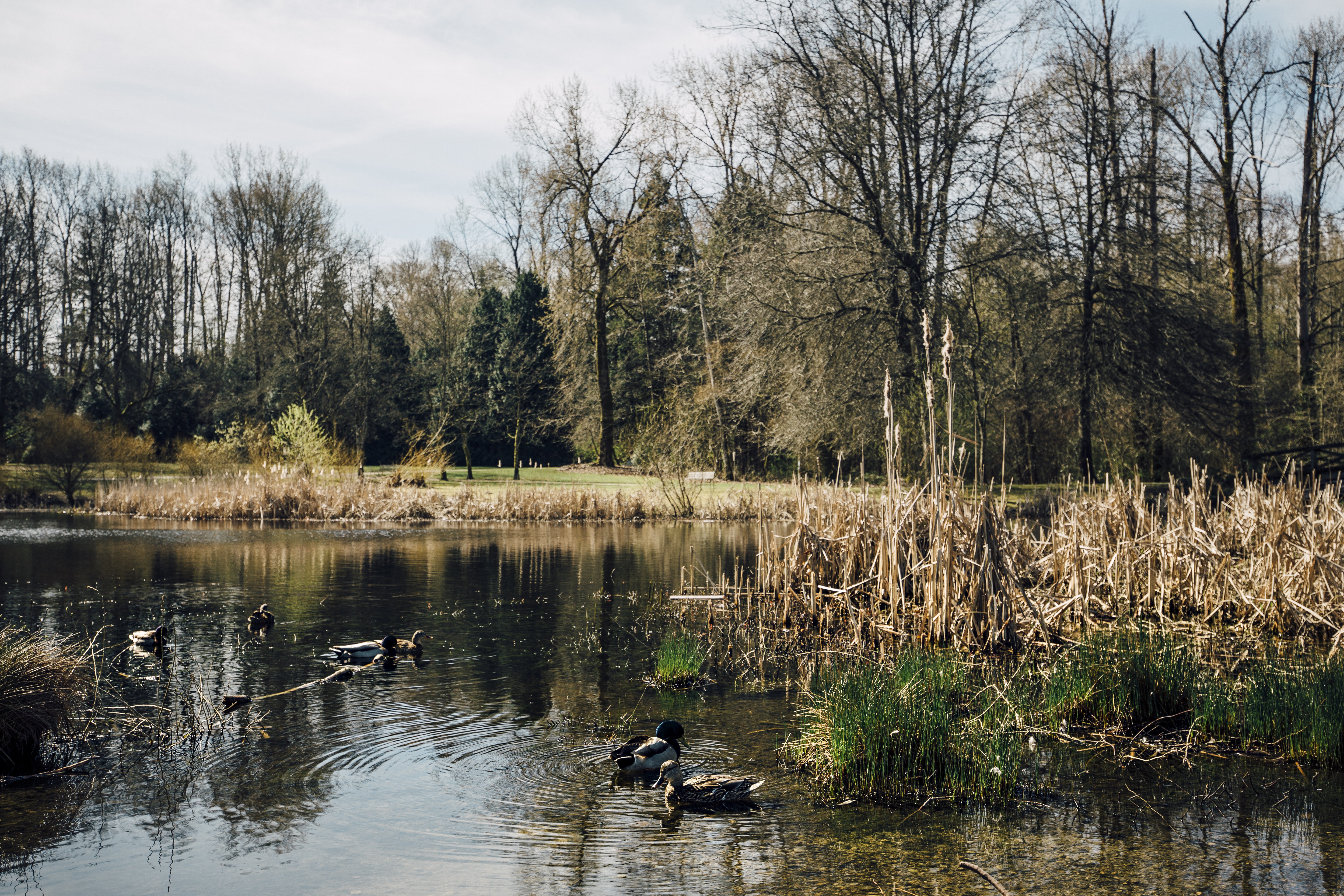 Though the All the Trees programme ran till the end of 2018, the citywide project of planting trees is ongoing. On the City of Vancouver’s website, a tree counter keeps track: 125,854 planted since 2010.

Many of these are not the same species that grow in old-growth Stanley Park. Vancouver’s streets are lined with non-native trees, like the 43,000 ornamental cherry trees, a now-characteristic sight in the city that began with a gift of 500 trees from Japan in the early 1930s. A Douglas fir requires far more space than can be spared on a city-block corner, and in a concrete-bound environment with higher temperatures from the “urban heat island effect”, sometimes it’s the more robust, warmer-climate-adapted trees that thrive. This also tells another story, one of climate change.

In that narrative, trees are the saviours, a carbon dioxide sink. One large tree can release a day’s worth of oxygen for four people. But increasing the urban forest canopy doesn’t only improve air quality and provide cooling shade; it yields a multitude of physiological and psychological benefits, too. Forest bathing, or shinrin-yoku, has long been practised in Japan and is growing in popularity worldwide, including Stanley Park, where “forest therapy” walks teach mindfulness techniques and sensory awareness. 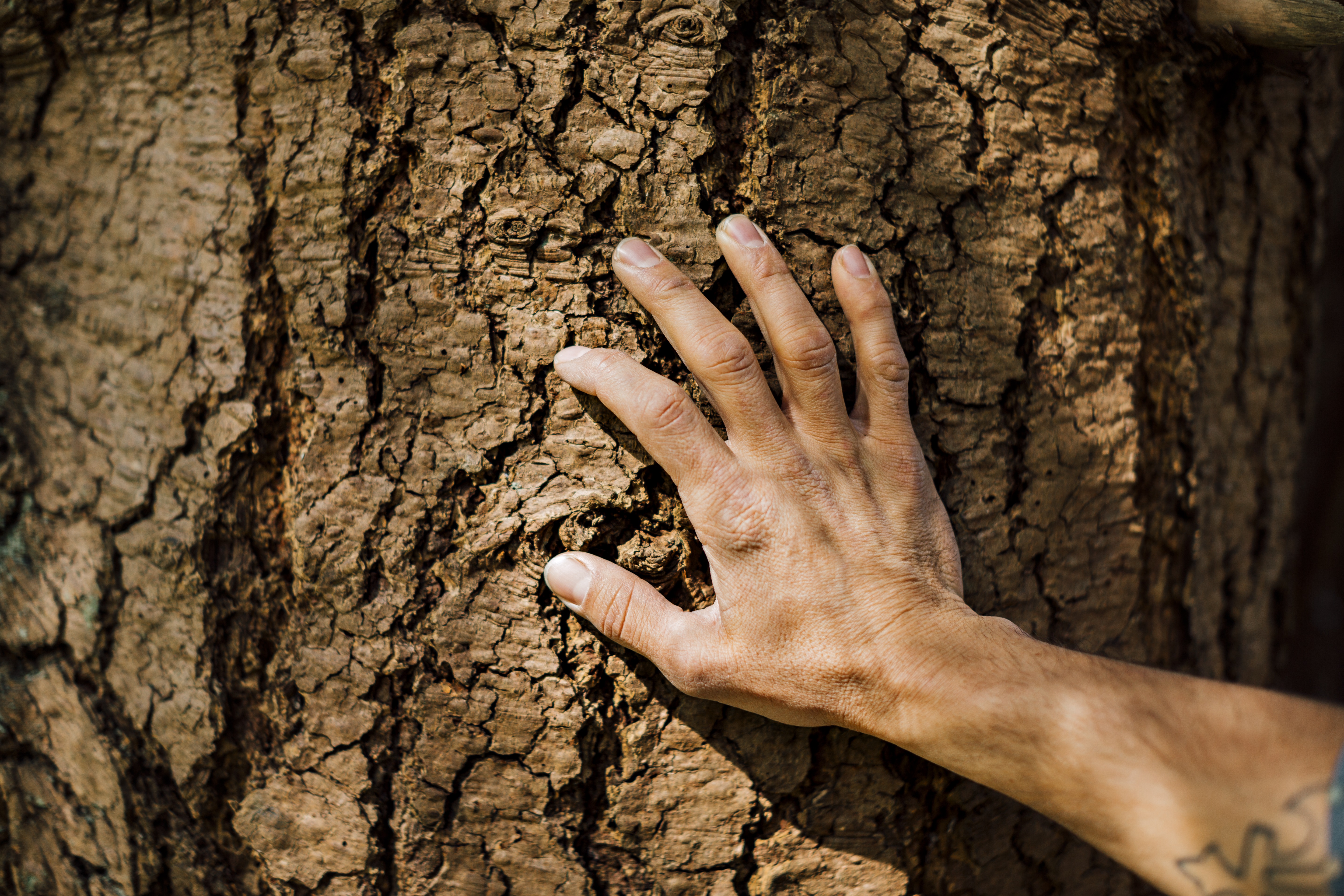 The forest is even finding its way to the rooftops of Vancouver’s downtown towers, where native plants are being reintroduced beyond the city parks. The Fairmont Waterfront hotel is opening a Coastal People’s Interpretative Garden this summer, featuring age-old Indigenous plants that make up the forest’s understory – from salmonberry to salal berries – used by local First Nations as food and medicine. The concept for the garden came together with the help of Candace Campo, founder of Talaysay Tours and member of the Shíshálh (Sechelt) First Nation.

I meet Campo back in Stanley Park, which is part of the traditional territory of the Coast Salish peoples, on her Talking Trees tour. It’s an apt name, as she reveals. “When I grew up there were three cedar trees in front of my house, and I played and grew up with these trees and felt really connected to them. In our culture, a tree, plant [or] animal is believed to have a spirit like we humans,” says Campo, a trained anthropologist and educator with a warm, steady smile and amiable touch for each tree we visit. “So, within this cultural context, the three cedar trees, complete with their own spirits, were my friends. They are no longer here but I still think of them.”

Campo guides me around Beaver Lake in the park. The buzz of the city recedes. I hear birdsong, the splash of ducks and crunch of our steps on the gravel path. We spot trees with gnaw marks from the nocturnal animal that the lake is named for. A floatplane overhead briefly interrupts the serenity and Campo’s soft-spoken storytelling. When the forest quietens again, she continues to tell me about the village that used to be here, the shell middens nearby, how the salal berry has five times more antioxidants than the blueberry and that hemlock sap can be used as a bandage. She points out the “nurse tree of the forest” (red alder) and the “tree of life” (that friendly cedar, which once provided almost everything needed for survival, from clothing to canoes). It’s all part of a shared wisdom dating back 14,000 years, Campo says. At the burly trunk of the “energy tree” – a Douglas fir – she invites me to smell and taste a tiny bit of its dripping sap, known for its nutritional value. Citrusy and minty, it’s like nature’s chewy, good-for-you candy.

Witnessing Campo interact with the trees around Beaver Lake, I think of those Tatlow Trail cedars on my running route. They’re marked as “the biggest cedars” on a map that Sutherland shared with me earlier, alongside other legendary trees: the Eagle Tree (atop of which, he says, nine times out of 10, you’ll see a bald eagle perched), the Hollow Tree (the remnants of a western red cedar that’s been an attraction since the park’s opening 131 years ago) and the National Geographic Tree (once the park’s biggest at 13.5m in circumference and thought to be about 1,000 years old; it was pictured in the magazine but has since fallen).

I embark on another trek into this ancient urban forest, map on my smartphone, channelling the big tree hunters – or “searchers”, as Sutherland prefers – who track and document these endangered relics. Sutherland is also the chair of the BC BigTree Committee, which compiles a list of “monument” trees in an effort to preserve and promote them, and he found Stanley Park’s current tallest – a Douglas fir measured at 63m.

I see the moss-flecked tree in a small clearing off another trail in the park’s 27km network, across from a stoic-looking stump. Slender and young in comparison to my Tatlow Trail cedars, it only emerged out of charred ground after an 1886 fire. I’m able to curve my out-stretched arms across the belly of its diameter – quite literally a “tree hugger” as I crane my neck to gaze up its height into the canopy. Blue sky amid green tells another part of this urban forest’s story. When past giants fall – whether by fire, windstorm, axe or age – they make room for new ones. It’s a strange juxtaposition in this city: towering trees beside sleek skyscrapers, ancient rhythms of life still beating in the modern and digital world. The tallest tree was a seedling when the park was founded. It’s not a half-a-millennia behemoth yet, but it could be – if we let it.

An icon of Vancouver, the 800-
year-old Hollow Tree is a western red cedar that has been a Stanley Park attraction since it opened in 1888. When it was damaged by a windstorm, the public pushed to save what remained and put it on the Vancouver Heritage Register. Now it is a monument supported by steel beams that continues to inspire public art and even forest-scented candles. 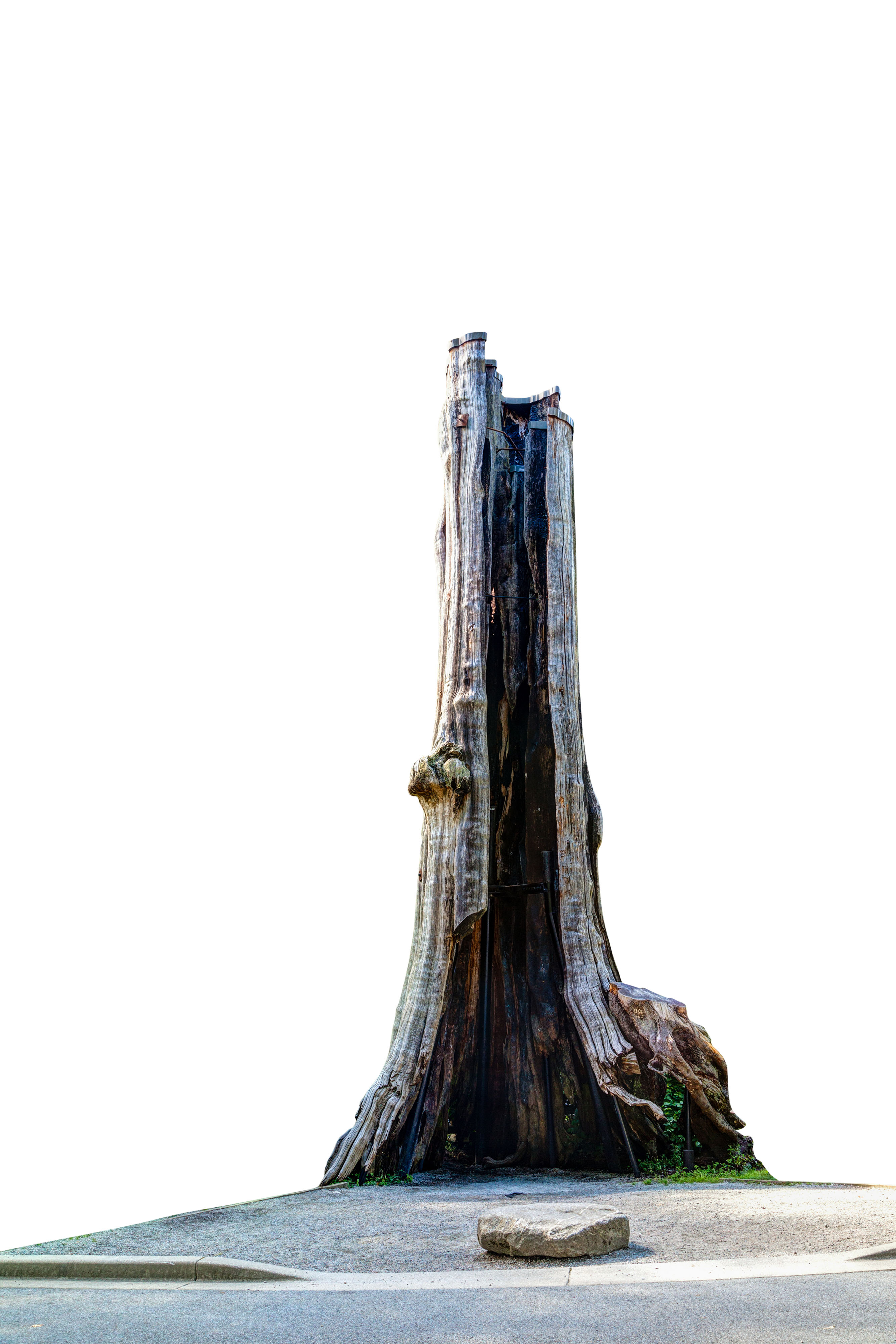 Part of forester Tobias Douglas’ line of candles, the Hollow Tree Candle has notes of cedar that echo Stanley Park’s earthy essence, along with hints of clove, gaiac wood and the warmth and comfort of vanilla. 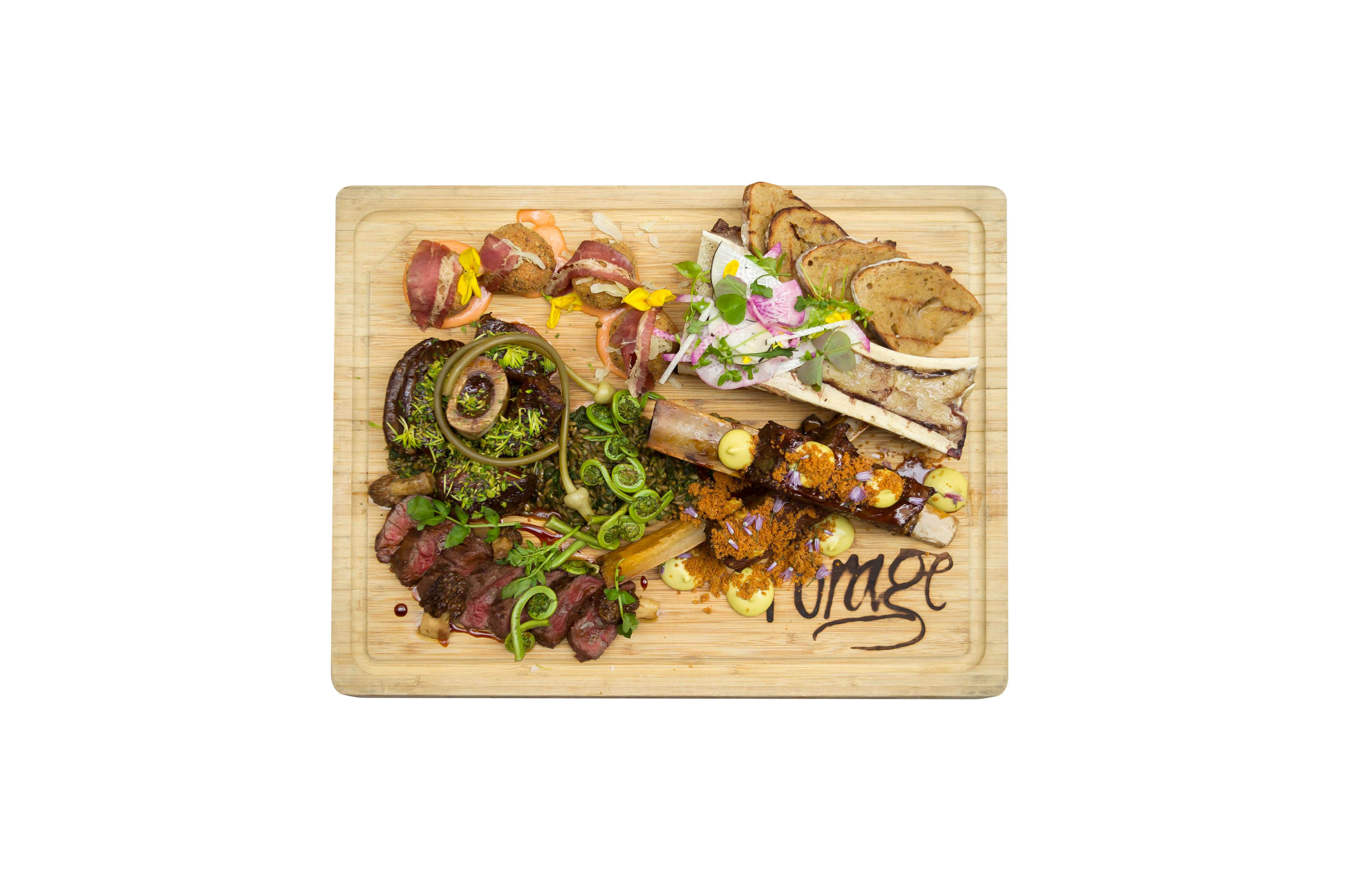 The sustainable-dining menu here reflects the restaurant’s name: foraged, grown, caught and preserved food from local farms and forests. New executive chef Welbert Choi was born in Hong Kong and is a passionate supporter of the locavore philosophy in Vancouver.

Sip on the Treebeard cocktail at this upscale restaurant in downtown Vancouver – it is an unusual,  earthy elixir of Douglas fir-infused gin, oaked rye, cedar, birch sap and alderwood-smoked tea. 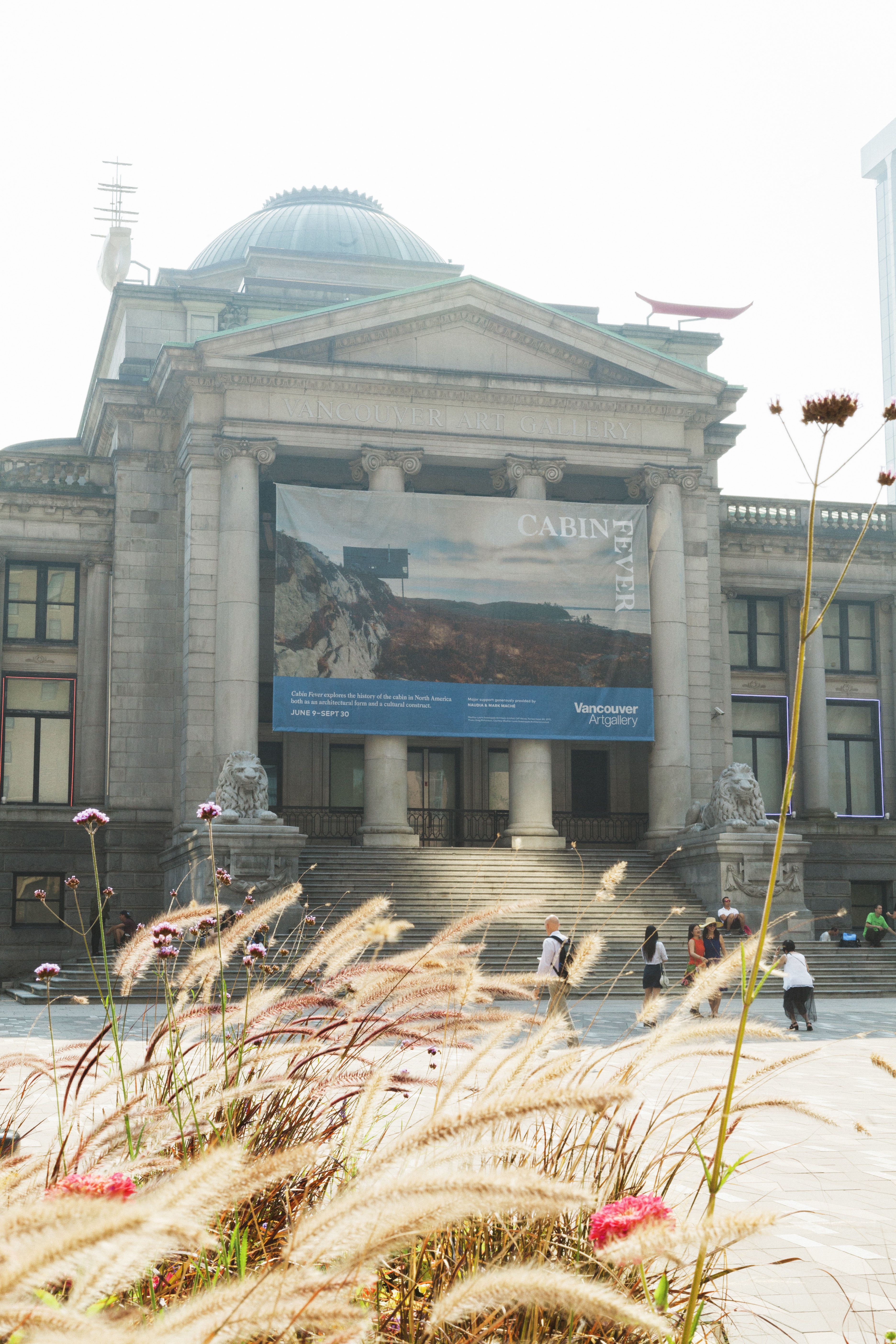 See the work of one of British Columbia’s best-known artists, Emily Carr, in the Vancouver Art Gallery’s permanent collection. She painted the West Coast landscape with reverence and was an early environmentalist. Many of her canvases depict early-1900s scenes of Stanley Park, where she often sketched. 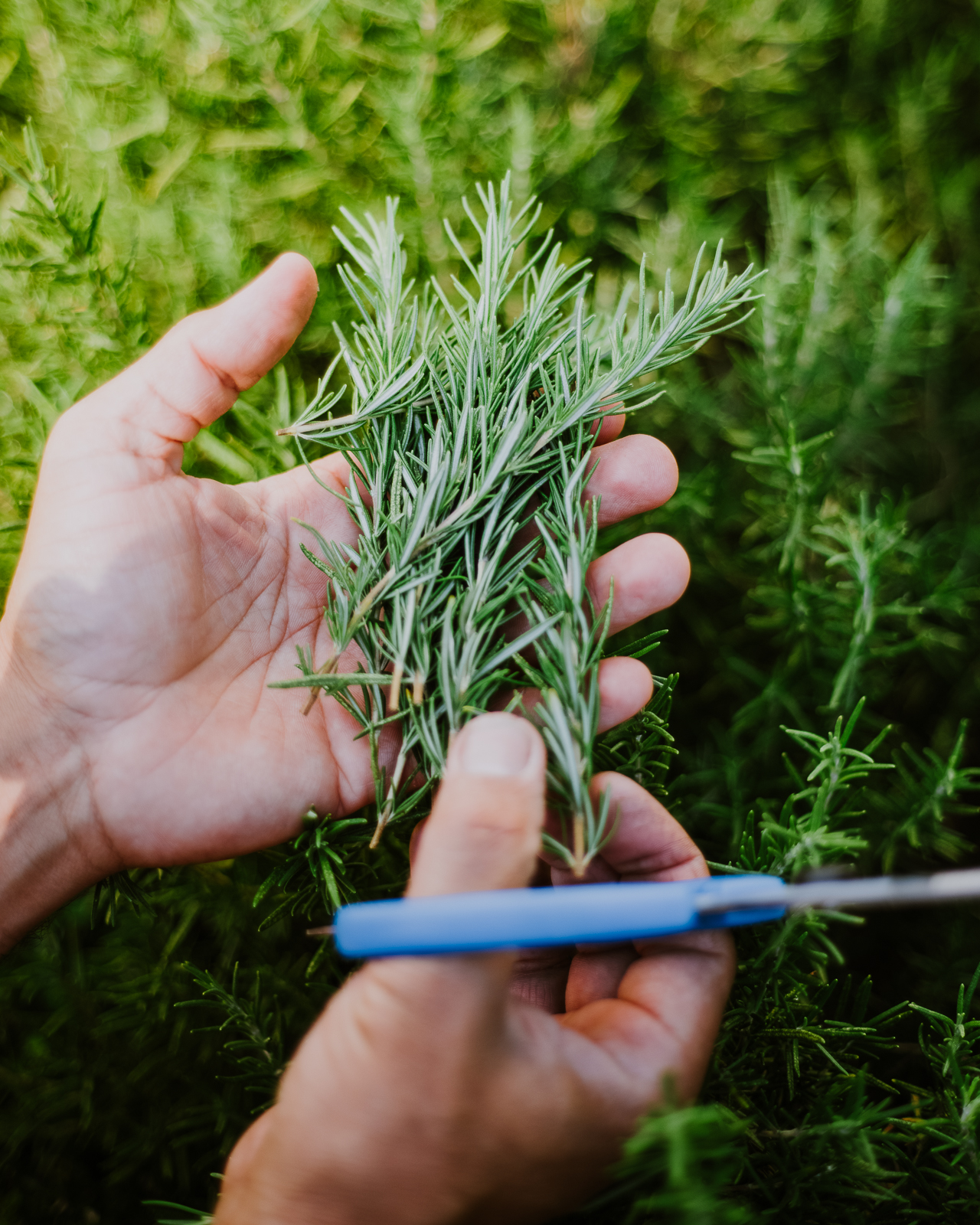 The new rooftop garden at the Fairmont Waterfront hotel incorporates First Nations experiences and the forest. “The concept for the garden was to take a piece of Stanley Park and bring it to our rooftop, to share a bit of the Pacific Northwest with our guests,” says a hotel spokesperson. Garden-to-glass cocktails and Indigenous-inspired dishes are also part of a special Talking Trees package.

The Douglas
A Douglas fir theme runs throughout this hotel, from the massive section of an actual tree, suspended on its side and forming the front desk, to the fir-
garnished signature cocktail, made with a locally distilled, Douglas fir-infused gin that’s also an in-room amenity.

Fly to Vancouver with Hong Kong Airlines and learn to talk to the trees! Click here