A blog documenting local life in the Maldives shines a spotlight on women doing great things against the odds. Zinara Rathnayake meets the duo behind the platform and the artisans, businesswomen and athletes challenging stereotypes in the archipelago 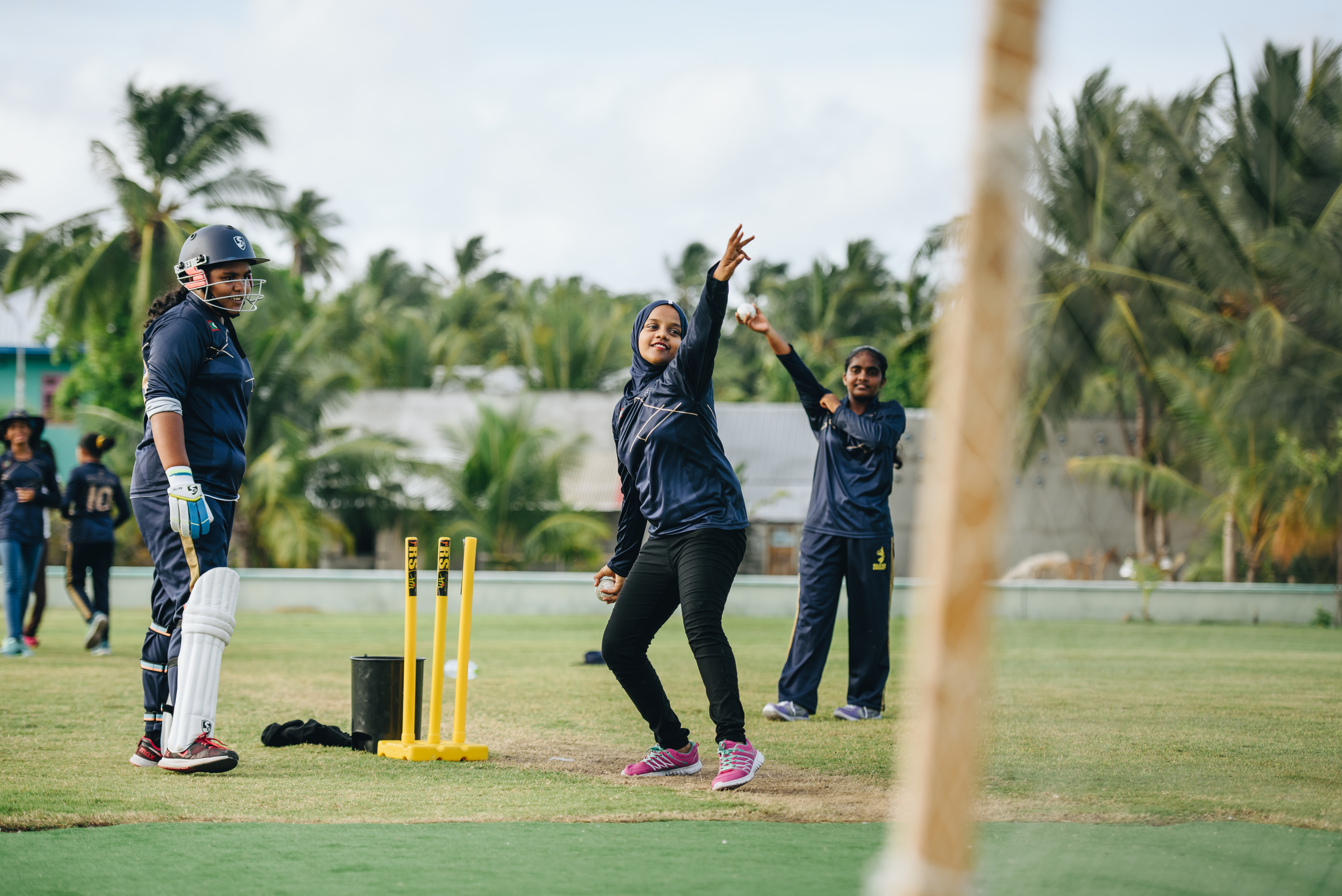 In Hithadhoo, a district in the heart-shaped southernmost atoll of Addu, Aishath Naj flies her drone over a pristine coral reef, capturing a pair of manta rays swimming in the water and, on land, Addu’s Equatorial Convention Centre. “People are surprised when they realise it’s me flying the drone. Or that [my husband] Dan is just there to hold the camera,” says the 27-year-old, dressed in jeans and a long-sleeved red top, her hair covered in a blue scarf. 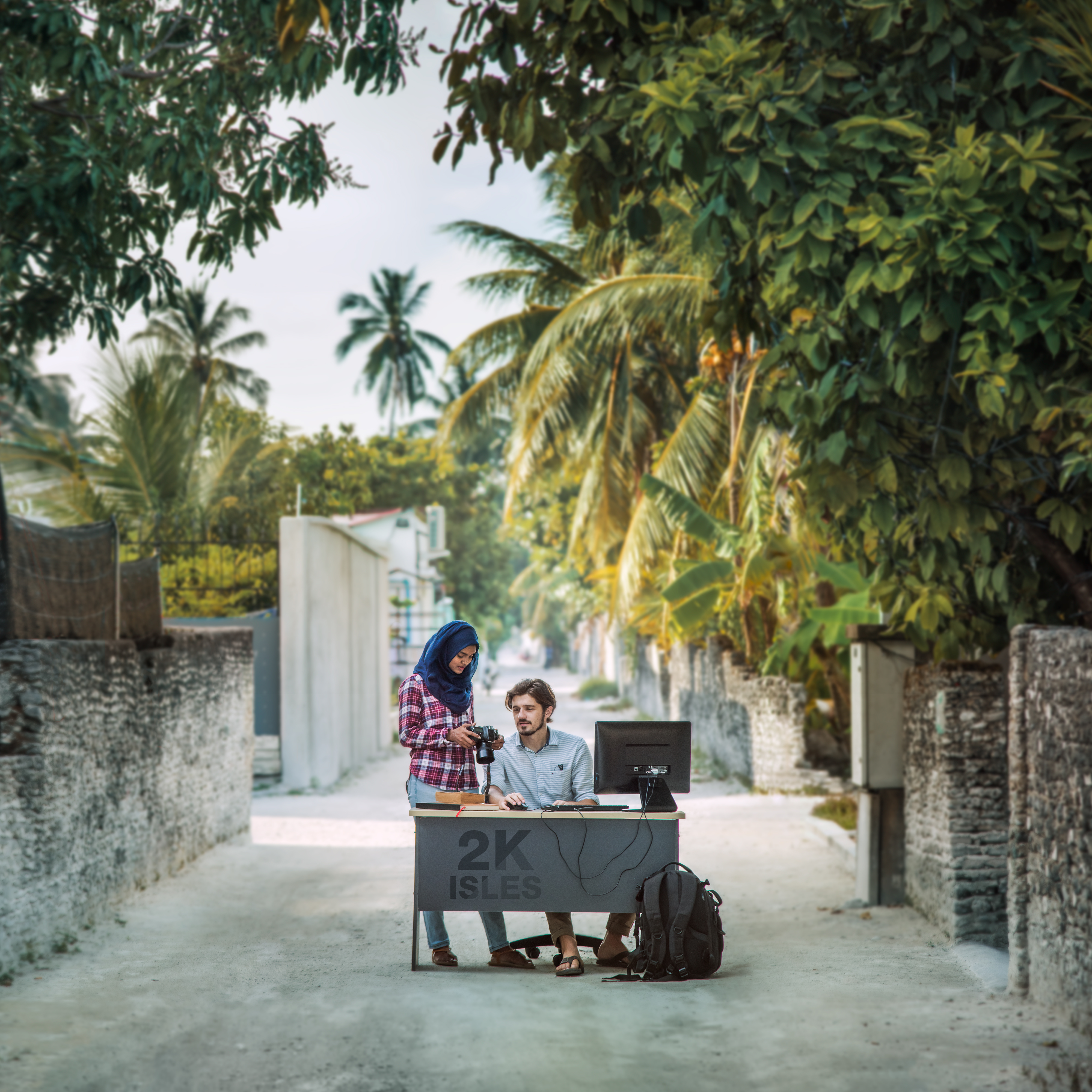 That sentiment may be old-fashioned but it’s not surprising. Like much of the world, Maldivian society is still largely patriarchal. According to the World Bank, just five out of the country’s 85 MPs are women and no woman has stood for president or vice-president since the archipelagic nation established a multi-party democracy in 2008. And although there are no legal job restrictions on women, female labour force participation is much lower at 47.6%, compared to 79.7% for men.

The gender imbalance can even be seen in the hospitality industry, one of the biggest contributors to the country’s GDP. According to the Ministry of Tourism, only 7% of people working in it are women, the majority of whom are expats. 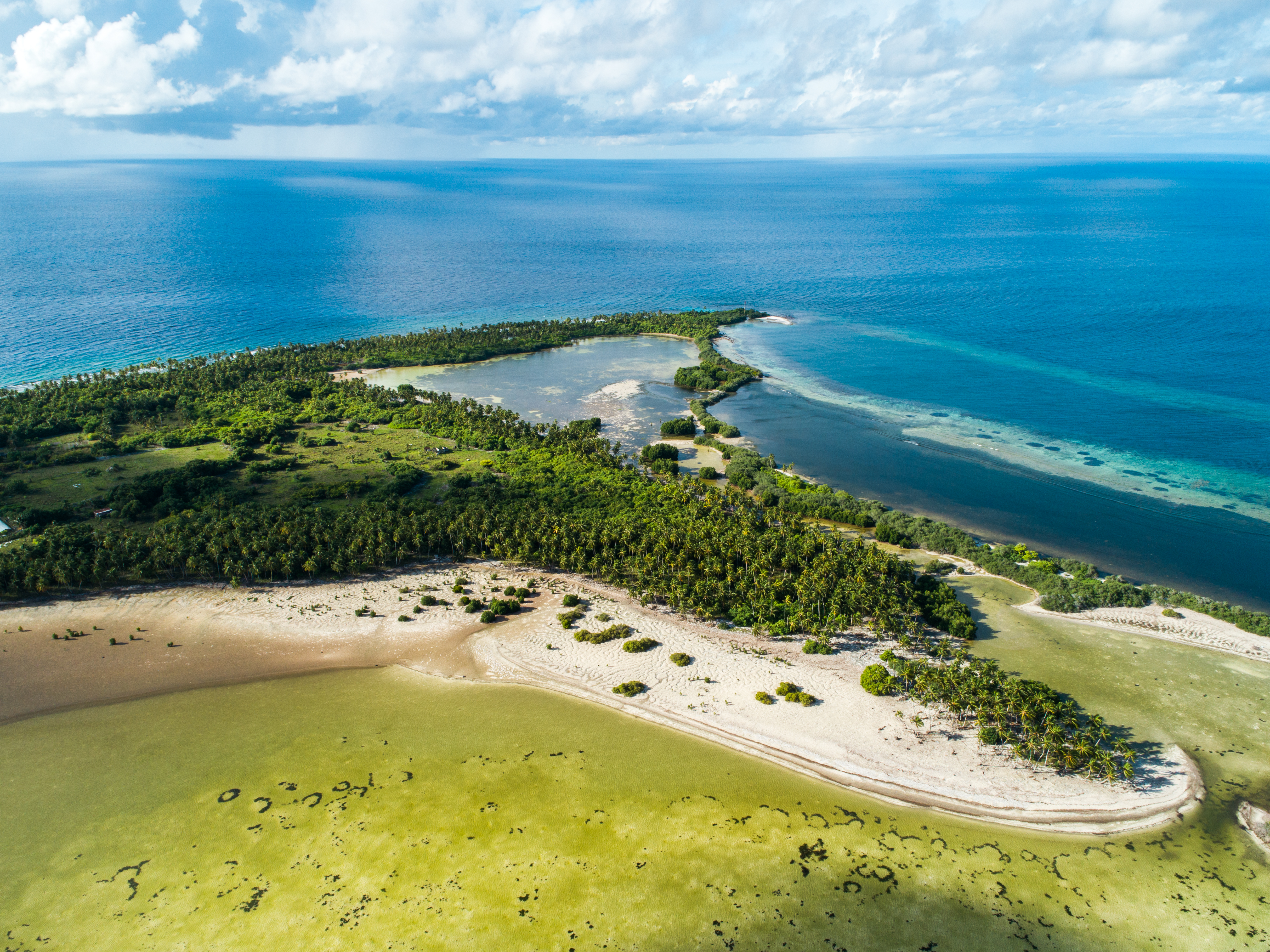 Naj, a Hithadhoo native, and her husband Dan Bosley produce Two Thousand Isles (twothousandisles.com), a blog documenting local life in the Maldives. Naj takes the pictures while Bosley, who has a journalistic background, writes the blog posts. Their aim is to showcase an often overlooked side as tourists make a beeline for the resort islands, where they have minimal contact with local life and culture. “Media coverage of the Maldives focuses on either politics or tourism,” 35-year-old Bosley says. “We wanted to work in the space in between the headlines and the holidays.”

Local women – and the integral roles they play in Maldivian society – are often the subject matter of Two Thousand Isles. “With men often away fishing or working at resorts, women have traditionally been the backbone of their communities,” Bosley explains.

One community documented by Two Thousand Isles is the female thundukunaa traditional mat weavers of Fiyoaree in Gaafu Dhaalu atoll. Reviving a dying tradition – and a laborious one, with each thundukunaa taking up to four weeks to make – these weavers grow and use a local reed, hau, known for its durability. Although there’s a demand for thundukunaa as souvenirs in high-end resorts, they have largely been replaced by imported rubber mats for daily household use, endangering a once-thriving craft and industry. But through the women-led Maldives Authentic Crafts Cooperative Society (MACCS) and funding from UNDP’s Global Environment Facility Small Grants Programme, there has been a small revival.

“Dhivehi culture is just waiting to be discovered by visitors, and these talented women are keeping the candle burning,” Naj says. “We wanted to document the mat weavers and other handicrafts as they are still struggling to survive, although they exist right next to a huge potential market.”

MACCS works closely with local women, showcasing their work at nationwide exhibitions and resort events. The women currently do not often get opportunities to interact with tourists, but there is a chance this might change in the future – with more guesthouses popping up on local islands, foreigners will be able to connect directly with locals.

For another example of overlooked local crafts, Naj and Bosley point to the traditional dressmakers in Madaveli, in the same atoll. Known as libaas, the traditional Maldivian dress with a wide, embroidered neckline is usually worn during cultural events. Local dressmakers like septuagenarian Fathimath Fariyal can make up to US$195 (HK$1,530) for every libaas they make at home. 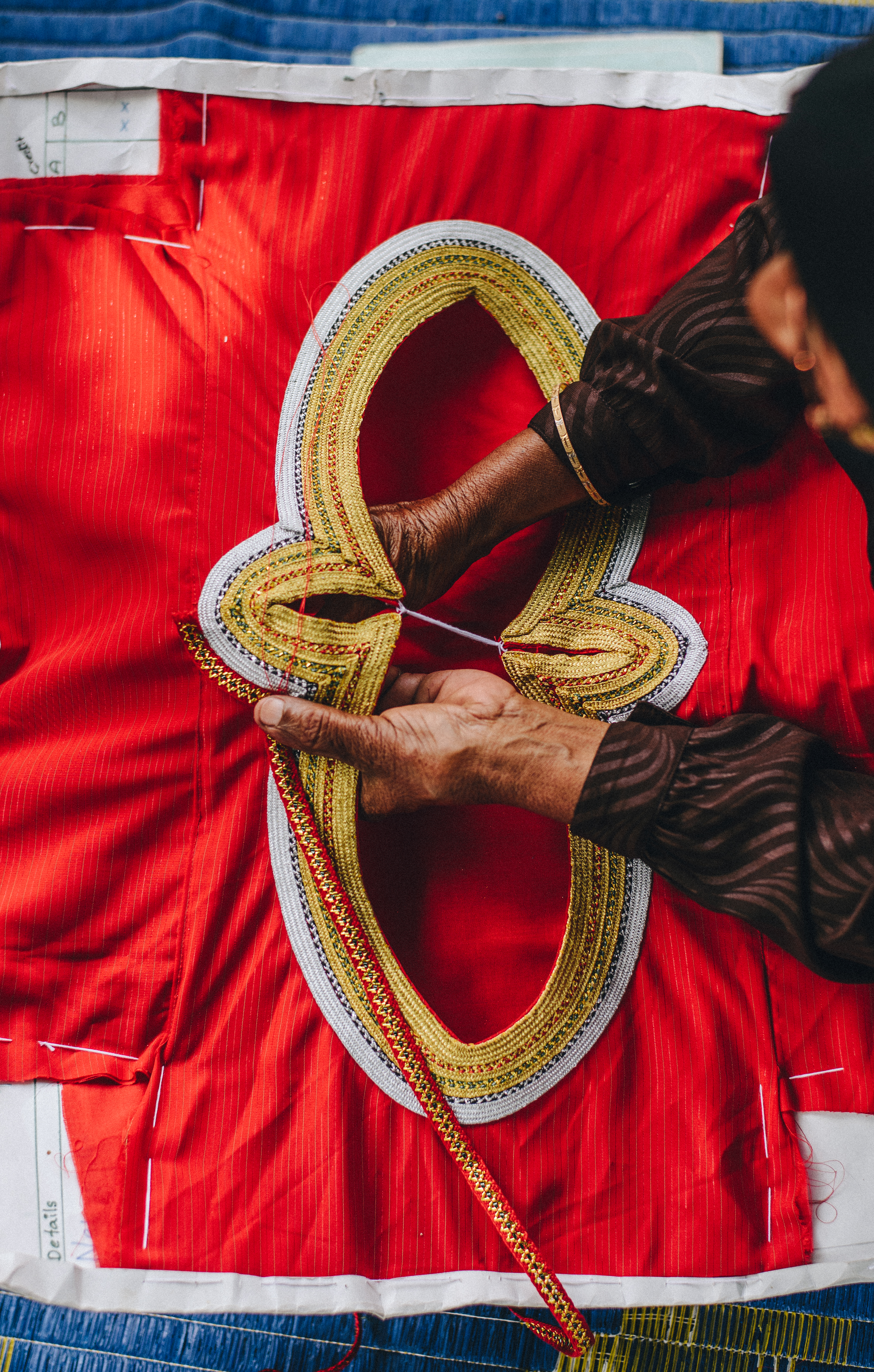 “These skills are passed down through generations. My strong love for this tradition is the reason I still work at 75,” Fariyal says. “We earn a reasonable income, enough to financially sustain us.” The libaas-makers largely still market their products through word-of-mouth, although social media has helped create awareness, too.

Beyond traditional crafts, however, the Maldives has some way to go in terms of employment options for women. Although they are offered the same educational opportunities as men – and the literacy rate among women is even slightly higher than men – these don’t always translate to equal opportunities in the workplace. Only a handful of women hold senior roles, and “society puts pressure on women to get married early, and bear children when they are not physically, mentally or financially ready,” says Hawwa Leesha, the co-founder of Women’s Center, an organisation that aims to empower women socially and economically.

Wellness professional Aishath Zulfishan understands the difficulties of establishing a career in the Maldives. Like Naj, Zulfishan – who goes by the nickname Xubba – is from Addu. After graduating high school, Xubba was inspired to pursue a career in spa therapy after a visit to the spa at luxury resort Soneva Fushi in Baa atoll. 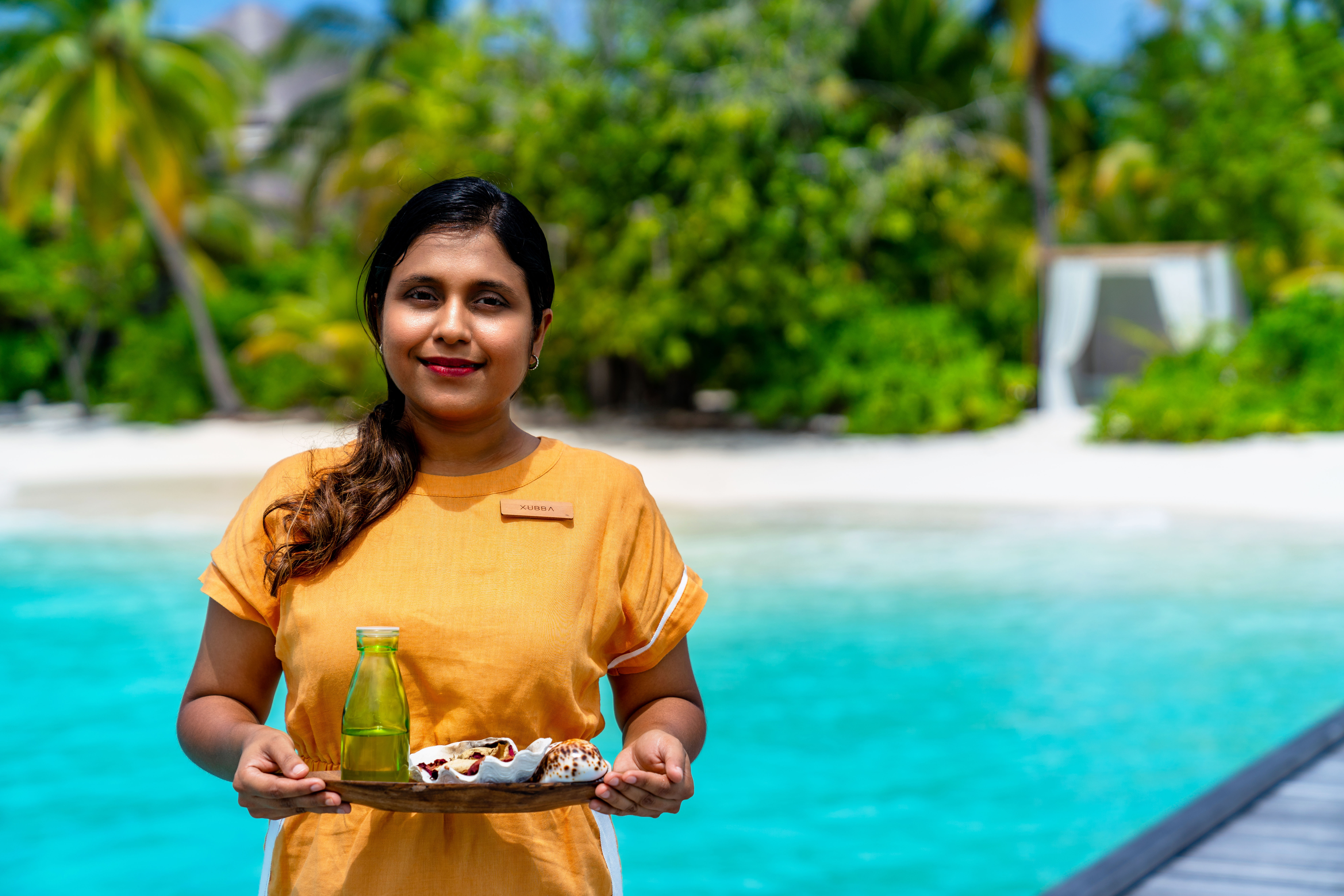 “I was amazed by the ambience, and I knew then that wellness was a viable career option,” recalls Xubba. Although news stories about illegal massage centres functioning as covert brothels had marred local opinion about the spa industry, Xubba was undeterred.

She first joined Huvafen Fushi resort in the North Male atoll as a restaurant hostess – she was one of only two women in a large F&B team. “Men have told me, ‘Go home – this isn’t your place’. And people from my community looked down on me for working in a resort,” she recalls. “There were times I wanted to quit, but I’m glad I persevered.”

That gritty attitude – along with support from senior managers – paid off. A year later, Xubba became the spa receptionist at Huvafen Fushi, before going on to complete an intense training programme in Bangkok to become a certified therapist. Her career then took her to Kurumba Maldives, where she became instrumental in introducing traditional Dhivehi treatments that quickly became popular among guests. Today, she is back at Huvafen Fushi where she started her career, managing the spa.

Naj says conservative views and pressure from family are partly responsible for women’s limited career opportunities in the Maldives. “Most families are concerned that young women will be drawn into difficult situations at the resorts, where staff live in small quarters, and alcohol, which is strictly prohibited on local islands, is available.”

But a younger generation of women like Xubba are pushing for more opportunities than have been available in the past. Take, for example, the young female cricket players documented by Naj and Bosley in Fuvahmulah, a small city in the archipelago’s southern region. In one image, Mariyam Zoona plays a delightful cover drive on a clear, beautiful day that earns four more runs for her team.

“We’re hoping that our pool of about 200 under-12 girls will help create more awareness of the sport to girls on the island,” says cricket coach Liam McCumiskey. 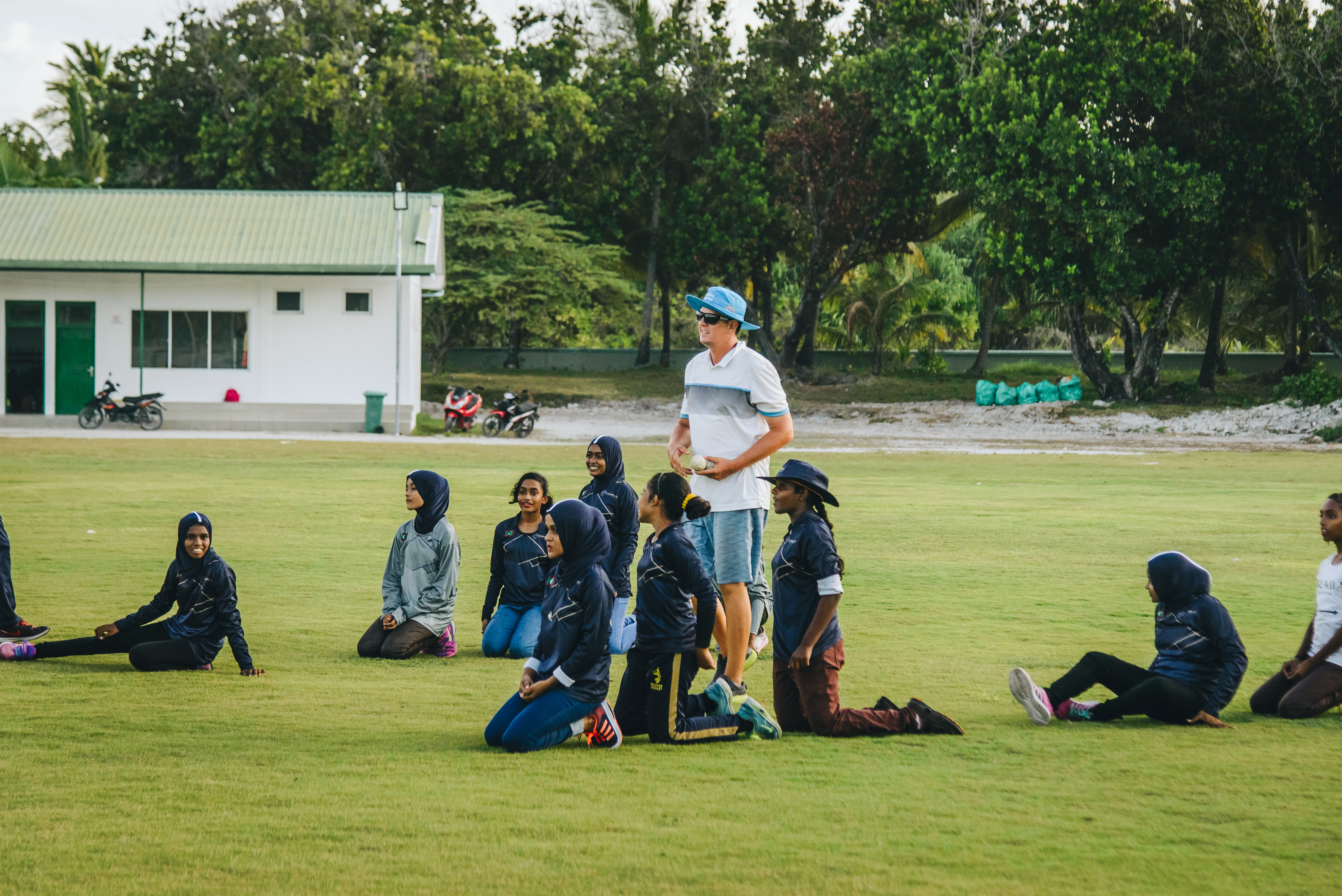 The Maldivian men’s team has taken part in the Asian Cricket Council (ACC) Trophy since 1996, and was granted International Cricket Council (ICC) affiliate member status in 2001. But the women’s programme only began in November 2016 in Fuvahmulah, as it is now a requirement of the ICC that member nations include a women’s programme in their annual schedule. With funding from the ICC, a small women’s cricket festival held in early January 2017 saw the participation of 50 girls from the 12–25 age groups. “Many of those girls are still playing today,” says McCumiskey, a qualified coach and the general manager at the Cricket Board of Maldives.

Apart from parental pressure to focus on studies and gender expectations forcing women to stay at home, the societal stigma against being dark-skinned keeps girls away from athletics, reveals Zoona. “People used to tell me it was a boys’ game and you will turn black if you play cricket. They also tell me there is no career in cricket.”

Today, however, Zoona is the captain of the Fuvahmulah Cricket Academy Women’s Team, who were finalists of the National Women’s Cricket Shield in 2018. Besides being recognised as being among the top five female players at the atoll level at the Annual Cricket Night in 2018 – an event that celebrates cricket in the Maldives – the wicketkeeper and batswoman also works full-time at the Cricket Board of Maldives, is a Level 1 (Asian Cricket Council qualification) cricket coach and a Level 1 cricket umpire. Visitors can observe women’s cricket practice sessions at the cricket ground in Fuvahmulah, between the Gaafu Dhaalu and Addu atolls.

Zoona is determined to keep on challenging gender norms through the sport she loves. “I’m happy that through cricket, we are making a difference in society,” she says, adding that her dream is to one day play for the Maldivian national team.

Back in Hithadhoo, Naj plans to keep on doing what she’s doing, despite the challenges she still faces even after being in the industry for a decade. “Half the people who approach me via social media assume I’m male. Others assume Dan takes the pictures. There is a tendency to take women less seriously in these roles.” However, she believes local female photographers are in a unique position to carve out a niche for themselves. For example, there’s a demand among visiting Arab families who sometimes request a female photographer to document their vacation on the resorts.

Naj thinks foreign visitors to the Maldives can do their part to support women, particularly when they opt to stay in guesthouses on local islands or make more of an effort to take part in community-based tourism. “The resorts here fulfil a luxury island fantasy,” she says. “But if more tourists choose to stay on local islands, there will be more economic opportunities for those who’ve been left behind by the resort industry, especially island women.”

How to experience local life in the Maldives

Opt for a treatment at Veli Spa, Kurumba Maldives

Its signature Akarakaraa Theyo Dhemun treatment uses a hot sand poultice and a healing oil made with Maldivian herbs for a soothing knead. kurumba.com 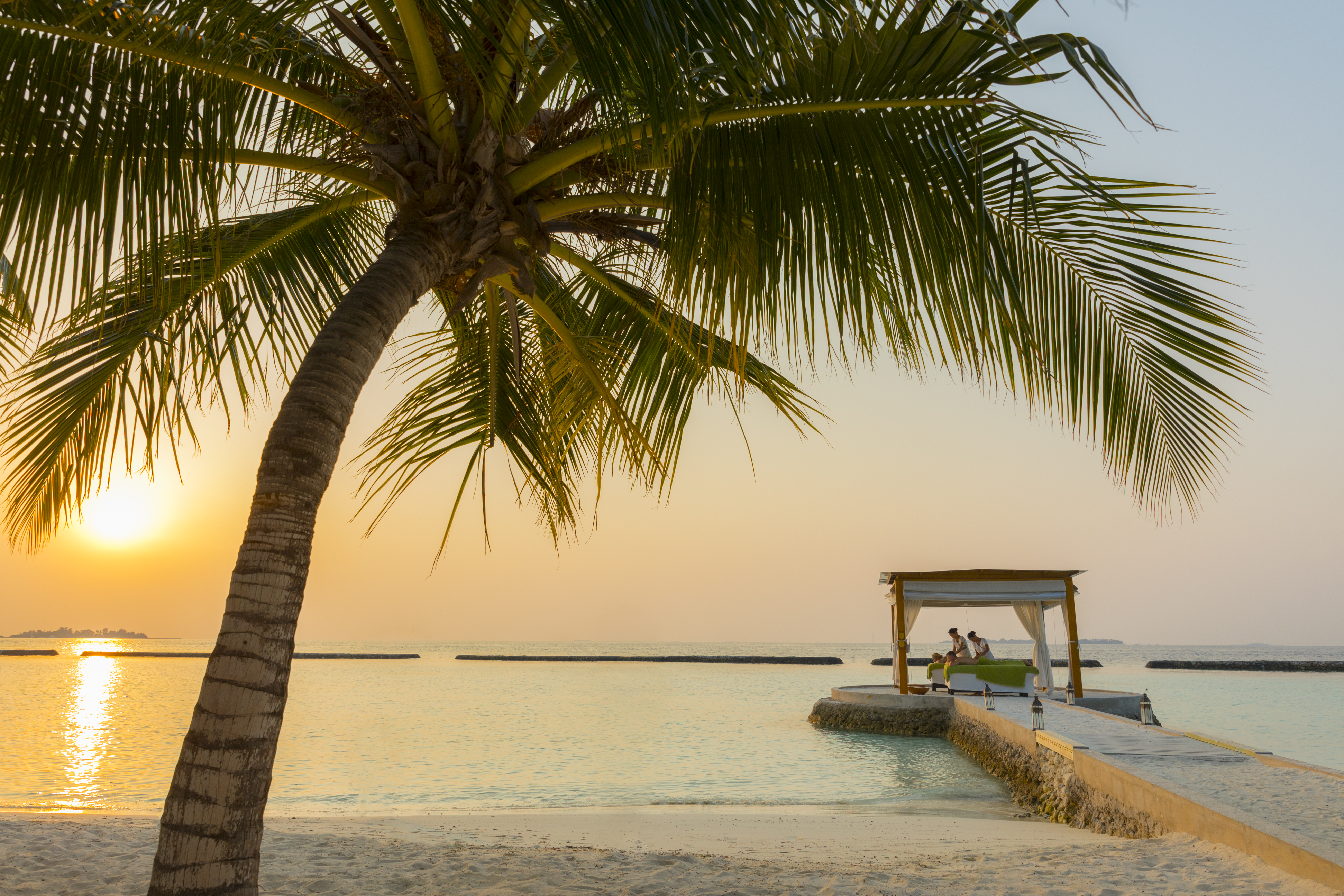 With over 20 dive spots, this local island is a great place to spot tiger sharks, huge schools of barracuda and more. Guesthouses are available for a range of budgets. fuvahmulahdive.com 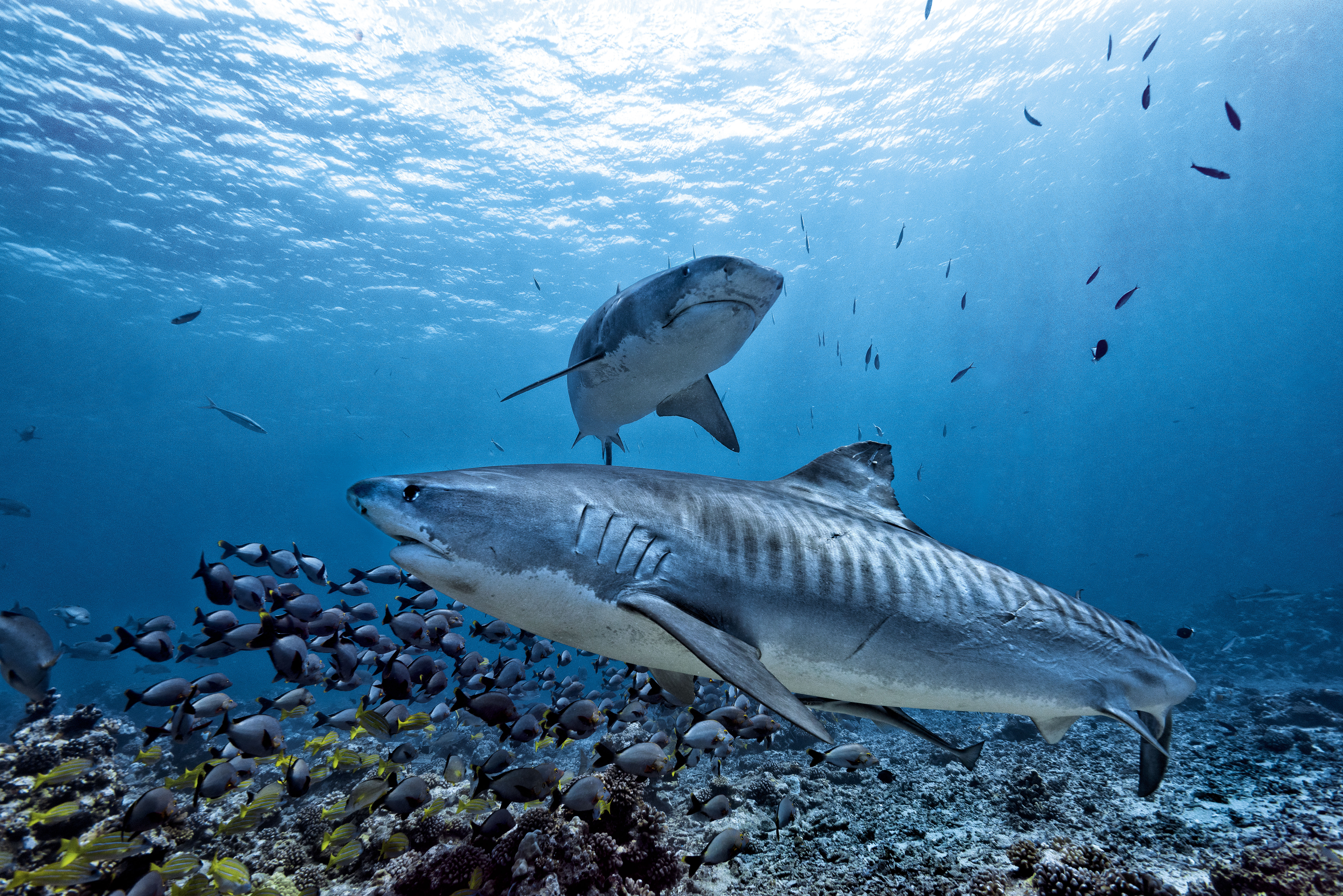 Located on the north waterfront, this is a great sot to people-watch and pick up some tropical fruits. This is where you can also buy hand-woven mats called thundukunaa. 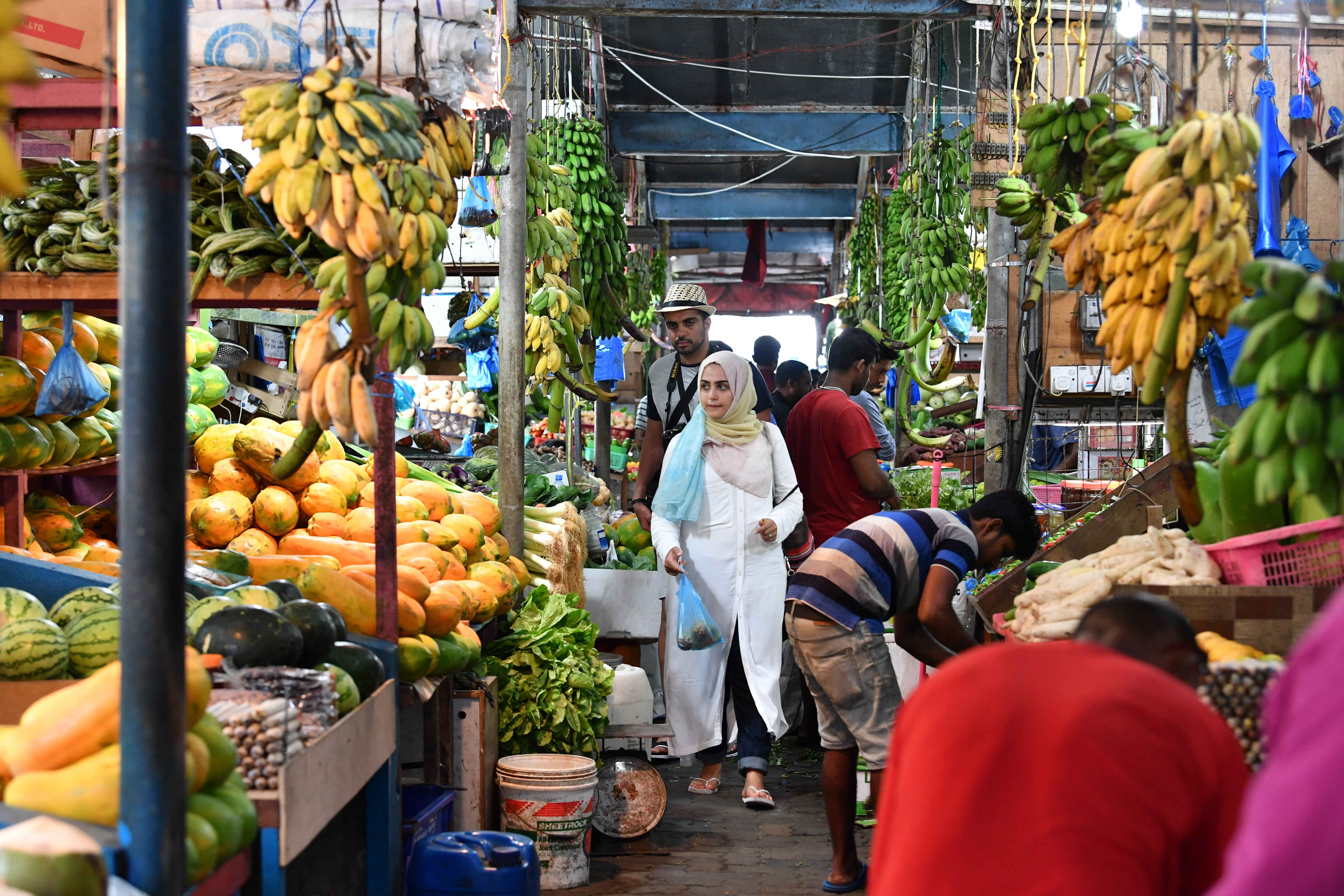