The head-shunt is ruthlessly effective. Y’Khun the Asian elephant trundle-crunches through greenery, forehead lowered, then fells a 20-foot tree with a decisive nudge. She and her elephantine pal Bun Kham writhe their trunks around the defeated tree, python-like appendages shoving vines into wobbly pink mouths.

“They act like auntie and niece,” says Dionne Slagter, animal welfare manager of the Animals Asia Foundation since 2017. Before working in Yok Don, Slagter was based at Cambodia’s Elephant Valley Project and has also worked on conservation projects with primates. “They make low frequency rumbles,” she says as we watch the elephant pair from behind long grass. “You’ll see the sinus above the trunk move and they’ll stand with their ears out. It’s like when the French see each other and give two kisses.”

A mahout – elephant trainer – clomps into view carrying banana trees, prompting Y’Khun and Bun Kham’s ears to flap in anticipation. “These ladies have a strong bond,” Slagter says, smiling as the eight-foot long snacks are dropped in front of the animals. I just about hear her voice above their scoffing sounds.

These two elephants – along with two others in Yok Don, in Vietnam’s south-central Dak Lak province – spend up to 20 hours a day eating. But before last summer, their schedule was far less appealing. Each morning they would have clunky metal howdahs – elephant saddles – strapped to their backs, wearing them for up to 10 hours a day. Between giving rides to tourists, they would be sporadically whacked with sticks by mahouts to keep them obedient.

Similar scenes can still be seen at tourist attractions near the government-owned park. The Yok Don elephants, though, gave their final tourist rides last July. Concerned that the animals were becoming weaker – Y’Khun is in her 60s – and to cater to tourists demanding non-invasive elephant experiences, park officials agreed to work with Animals Asia on what they called the country’s first ethical elephant tours. If successful, this could be groundbreaking for animal lovers and elephants alike in Vietnam.

On the trips, launched last October, tourists don’t touch the elephants, whose howdahs are symbolically strung from the ceiling of Yok Don’s restaurant. Instead, visitors simply head into the forest on foot to watch the elephants wherever they happen to be and as they go about their new lives amid the greenery. The elephants roam alongside mahouts but are free to travel wherever they want in the 115,000-hectare park – eating, swimming and strolling where they choose. But mainly eating.

Netherlands-born Slagter was here for the transition. “On that final riding day I took photos because I thought: This is it… this is changing history for elephants in Vietnam,” she says, her voice cracking slightly at the memory. “I nearly cried because it was a promise to them: This is your last day.” 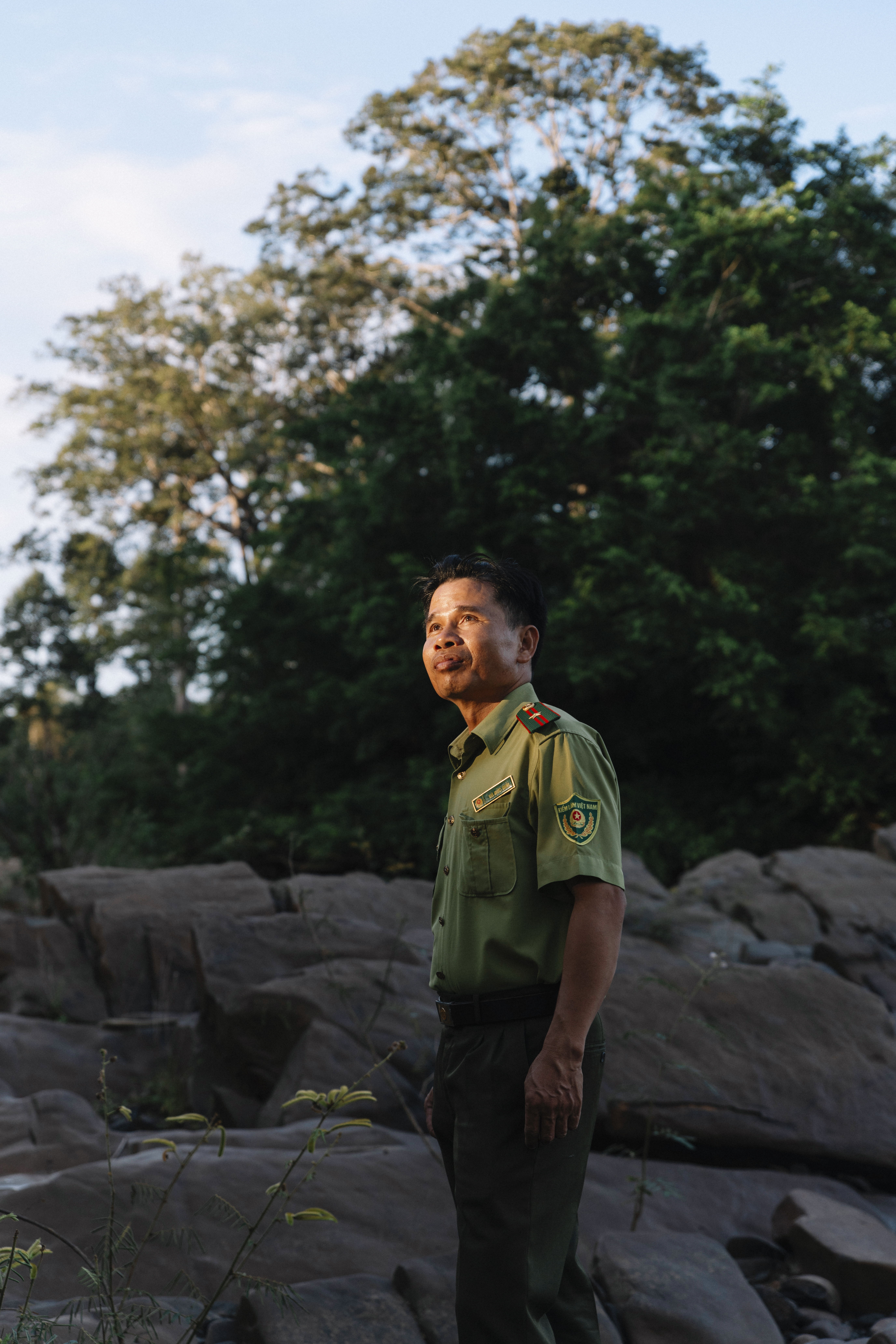 Vu Duc Gioi, head of Yok Don tourism, says that the recent rise in global awareness of animal rights gave him confidence that the time was right for the switch. With Asian zoos regularly shamed on social media for appalling conditions, the animal rights climate is decidedly different to that of 20 years ago – that was when the first tourist elephant rides were offered in the province to almost no backlash.

Since around 2014, Gioi says, Yok Don ran “care” elephant tours on which tourists could feed and wash the animals. These still involved tourists touching elephants, though, and the riding experiences were on offer to those who still wanted to saddle up. “Many people told us that they didn’t want to ride… After we found support from Animals Asia, we changed completely,” Gioi says. “The animals aren’t strong enough to carry tourists. We had to change.”

Animal rights activists might call the change belated. Recent kickback against elephant-riding in other Asian countries has already resulted in many non-invasive encounters being offered in place of rides. In 2006, Cambodia’s Elephant Valley Project launched with the motto, “Let them roam free”. Laos’ Elephant Conservation Center, opened in 2011, has around 30 elephants in a protected forest. In the mid-2000s, Elephant Nature Park, near Chiang Mai in northern Thailand, phased out elephant performances and focused on caring for them instead.

According to Slagter, Vietnam lags behind these neighbours partly because of the comparatively low number of elephants in the country. There are around 80 captive in Vietnam, used for riding, farm work or in zoos, compared to thousands in Thailand.

The deeply embedded tradition of using working elephants in Dak Lak further explains why the province has not become a bastion of animal rights awareness. In Ban Don Tourist Centre, which showcases the culture of the local M’Nong ethnic minority, I see a 38-year-old female elephant named H’Tuk standing, chained to a tree. Howdah on her back, she’s surrounded by dung as tourists use her as a selfie backdrop. 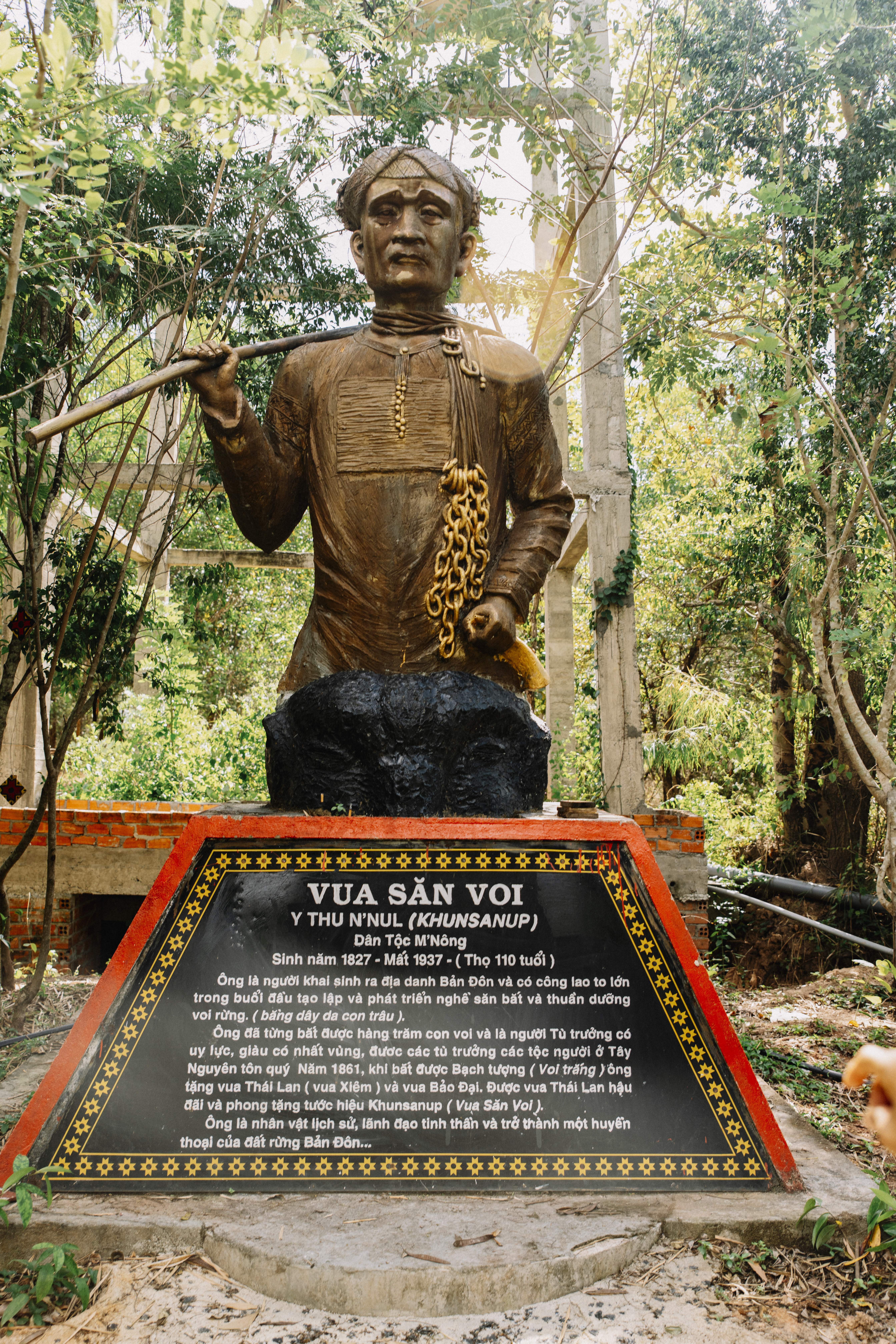 Close by is a statue of Vua San Voi, described as one of the original mahouts in Dak Lak province’s Ban Don county, who died in 1937 and was called Elephant King due to his owning nearly 500 elephants in his lifetime. Pinned to walls near the statue, which depict the king with chains slung over his shoulder, photos show M’Nong people astride elephants.

The M’Nong traditionally used elephants to carry farm equipment around the rural region, before shifting the focus of working elephants to tourist rides over the past decade. To tame the creatures, before the method was criminalised in 1995, they would take young elephants from wild herds. The calves would then undergo a process known as “breaking their spirit”. This involved the animal being tied up, starved and beaten before a “saviour” owner was introduced to it, pampering it and giving food to instil loyalty.

Back in Yok Don we paddle in a river where Thong Ngan, a young male elephant, is enjoying a dip. He slaps the water with his trunk, snorting out wet trumpet sounds. As well as blatantly showing off, he is washing himself against the riverbed, I’m told. 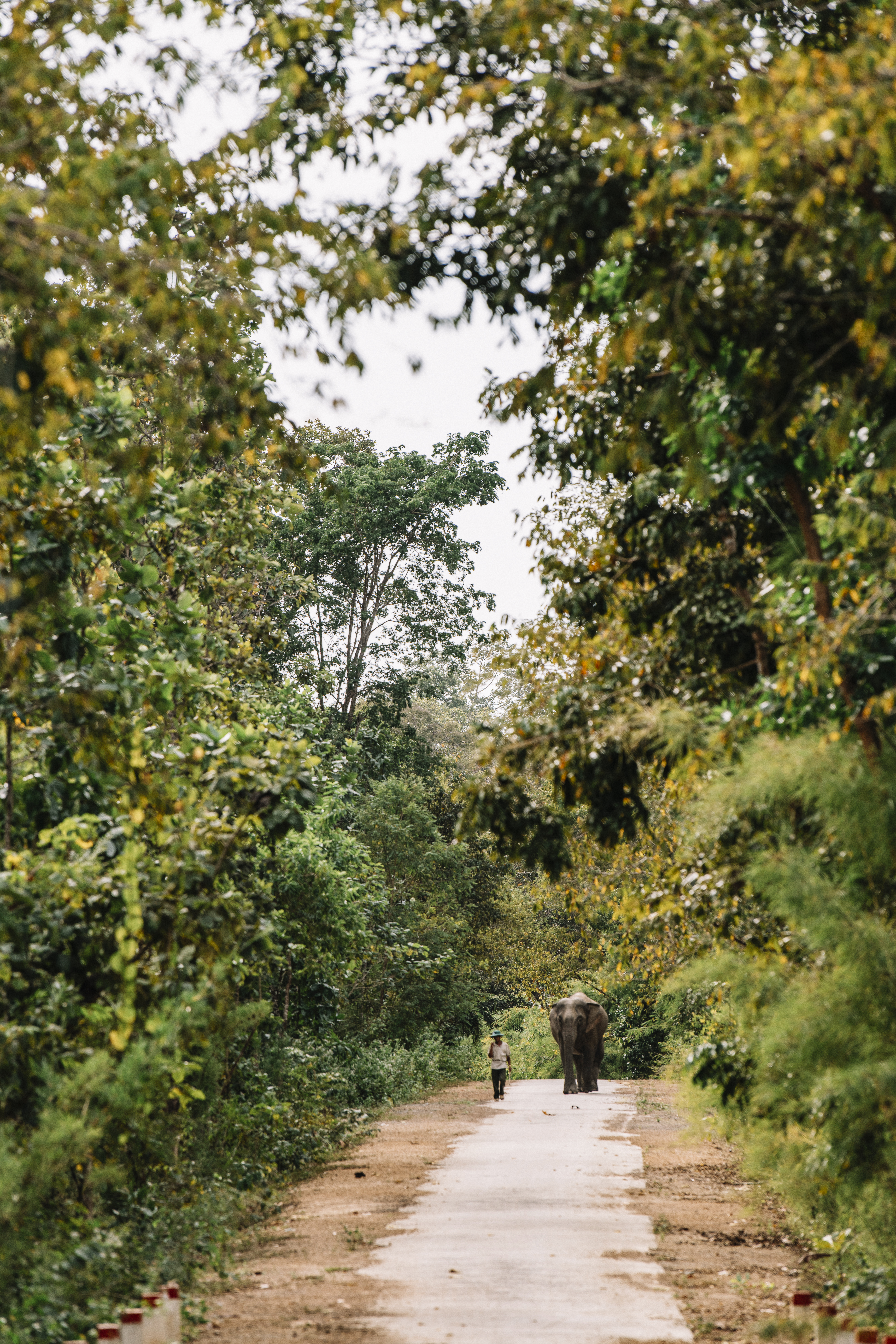 Thong Ngan, whose name means “Gold Medal”, was moved to Yok Don in 2001. Park officials claimed this was because his wild herd came into conflict with humans, although animal rights groups suspect this may be an excuse they used to gain another elephant. Like many other captive elephants in the region, having been trained by a mahout, he carried farm equipment and gave rides before the new, more “ethical” model began.

He’s boisterous, splashing like a hyperactive toddler at bath time. “Researchers think he’s noisy because he didn’t grow up with herd role models,” says Slagter, as Thong Ngan sprays us with river water. “He’s in his twenties but you’d expect this from a younger elephant – showing how big he is.”

Slagter says the effects of the no-riding model are already showing. Having more eating time the elephants are, she claims, “the roundest in Dak Lak”. Gioi says “fattest”. Slagter laughs, adding, “It’s natural – fattening for dry season. Their skin is healthier and they have fewer parasites because they can dust themselves.” 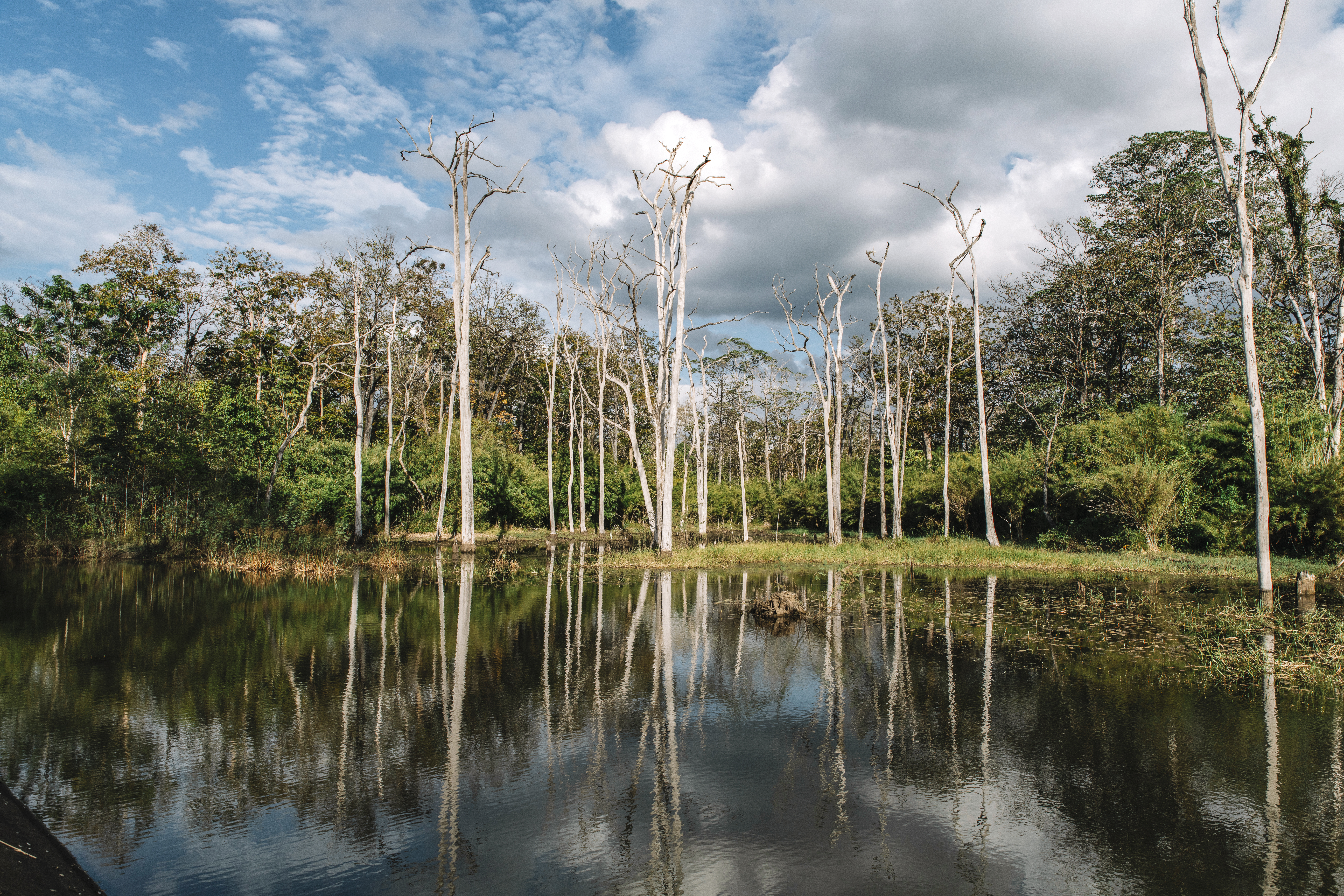 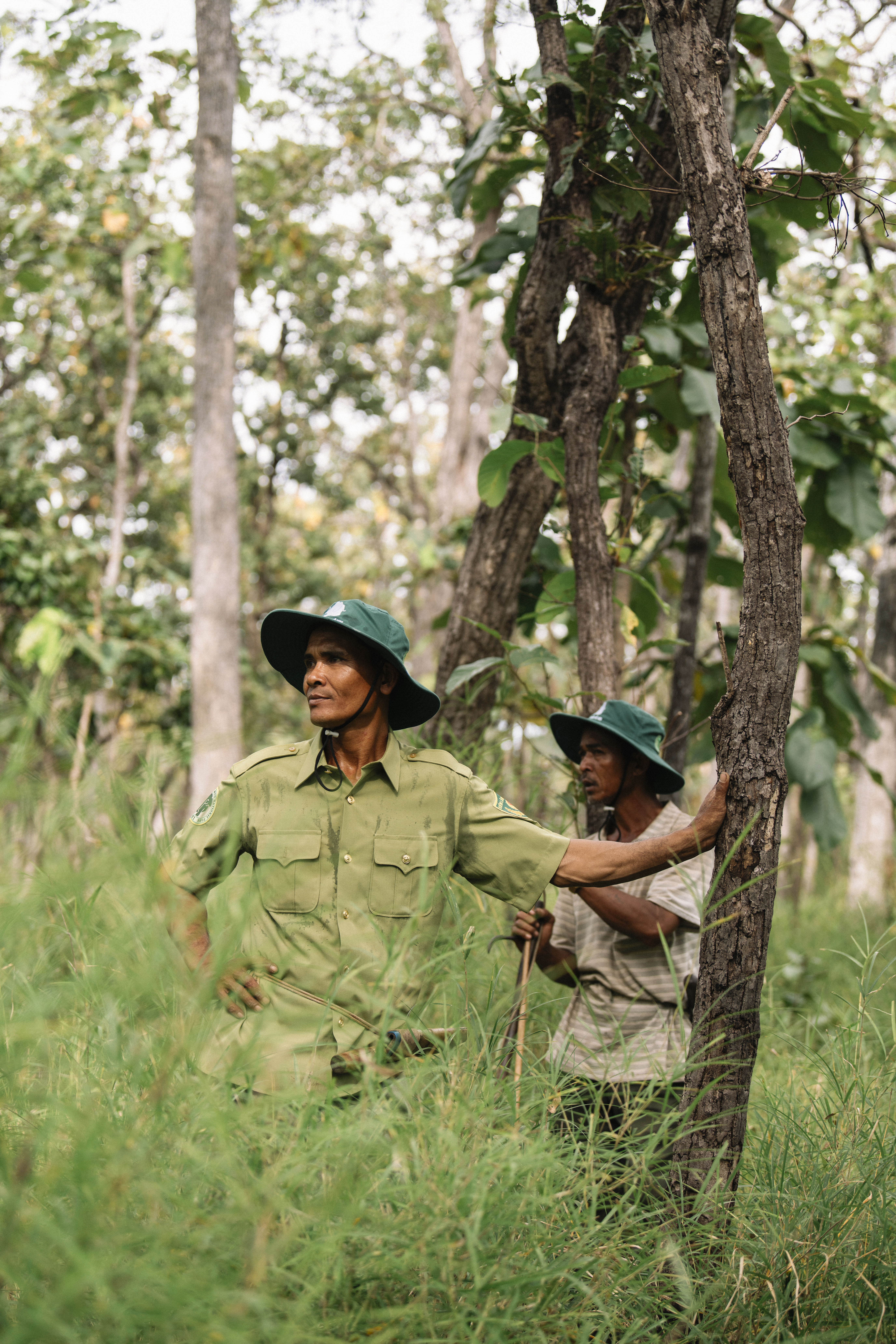 It’s a positive start and Olsen Animal Trust, a UK-based animal welfare organisation, has given Yok Don US$13,000 to compensate it for the loss of earnings ditching tourist rides will cause in its first year without them. Park officials say that with more and more tourists being aware about the detrimental effects of elephant riding, they are confident that the non-invasive tours will soon be financially sustainable without subsidies. 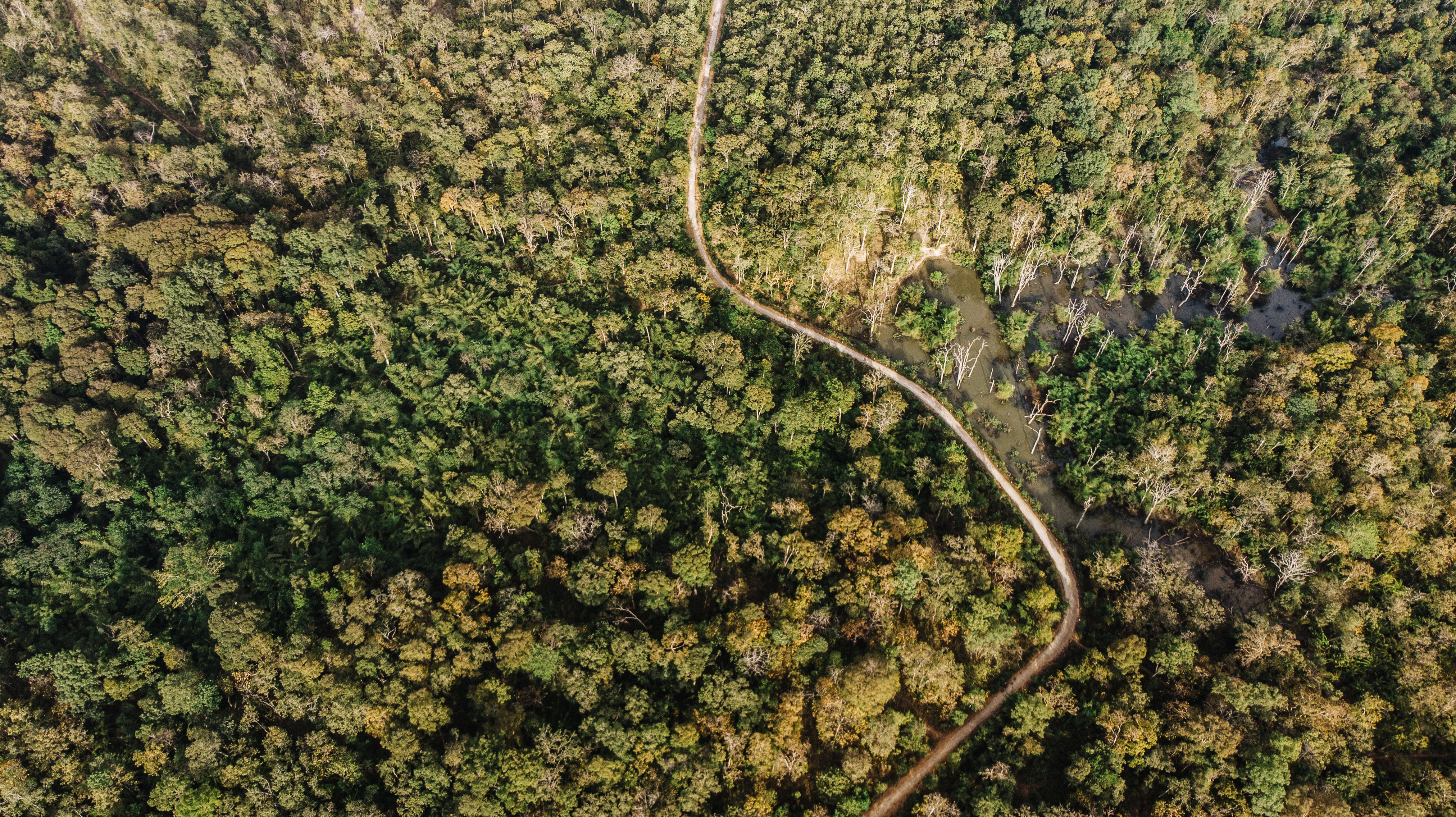 Slagter says the government is supportive. With authorities concerned about there being only around 100 wild elephants in Vietnam, in addition to around 80 captive, measures that could increase the chances of elephant breeding are welcomed. Park rangers say that there have not been successful captive elephant births in the country for 30 years.

“Breeding isn’t high on Animals Asia’s priority list,” says Slagter. “But we’re convinced that if we provide good welfare it’ll happen.” For now the locals seem happy to keep trying. In Ban Don Tourist Centre a mahout giggles as he shows me a video on his phone of his elephant H’Tuk being mounted by Thong Ngan.

New calves may not be arriving yet, despite these “romantic” scenes, but the ripples of Yok Don’s new model are being felt. Managers at neighbouring elephant attractions have consulted Yok Don staff about improving elephant welfare. Gioi says that with the park being government-run, the change will help increase the chances of a full elephant-riding ban being implemented in Vietnam one day. “I’m confident it could happen,” he says.

Just before leaving the park I ask Slagter why she feels bonded to these animals. She closes her eyes, leaving an elephant-sized pause before sharing her answer. “What we put them through… how we worked them, how they were broken,” she says. “They still tolerate us and don’t seem to hold grudges. 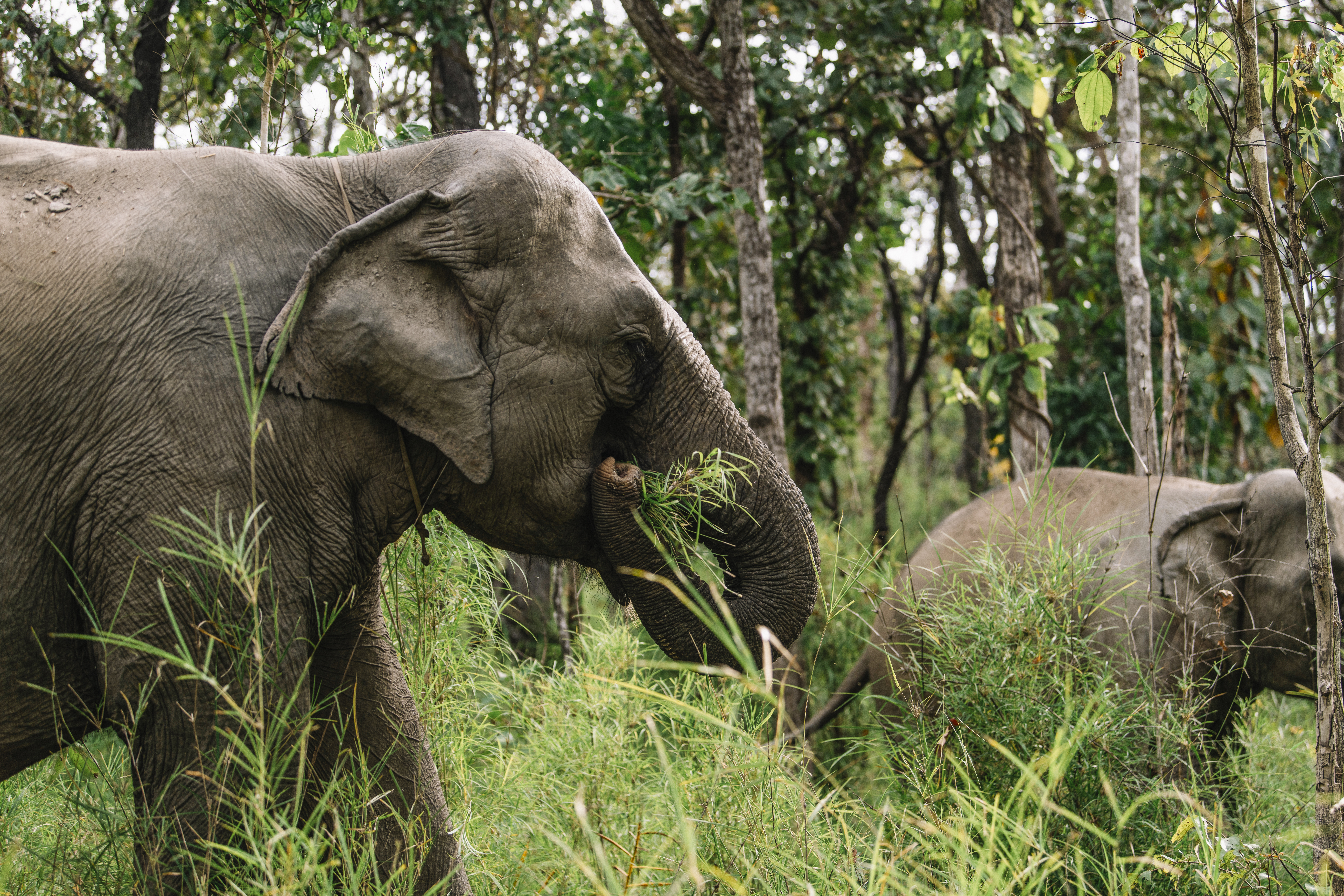 Find out more by visiting yokdonnationalpark.vn

Biosphere Expeditions, Maldives
This non-profit organises conservation projects in various locations. In the Maldives, you can help marine biologists study and protect the Maldives’ coral reefs and whale shark population.

The Dorsal Effect, Lombok
This project helps fishermen previously involved with the shark’s fin trade find an alternative source of income: by hiring them to take tourists out for snorkeling and beach-hopping boat trips.