This area of the City by the Bay is usually passed over for more famous sights like Fisherman’s Wharf and the Painted Ladies. But when resident Sarah Feldberg goes on a scavenger hunt for its Privately Owned Public Open Spaces, she uncovers a unique perspective on the city 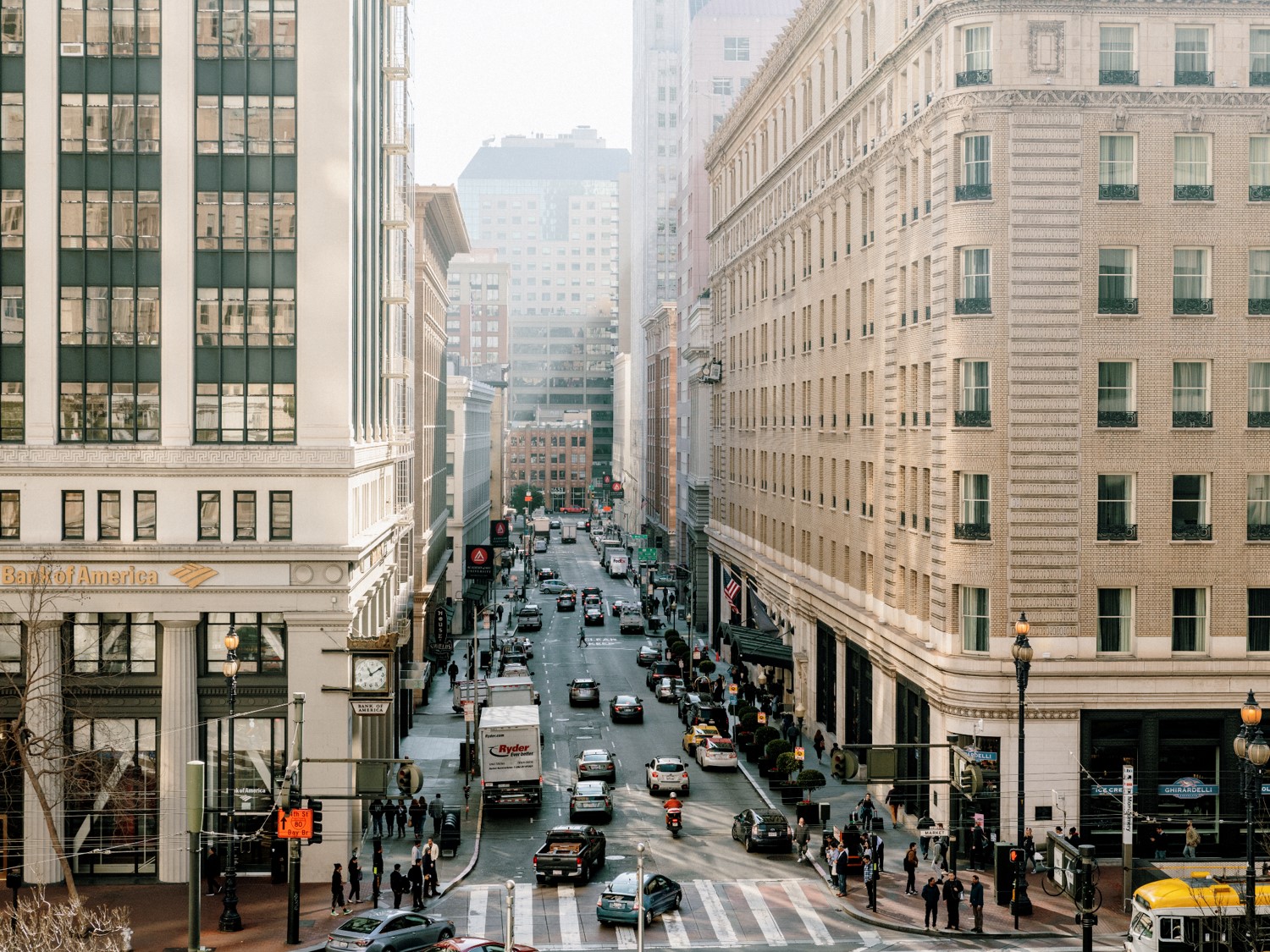 There’s a plaque inside Transamerica Redwood Park in San Francisco, mounted on a concrete wall uncomfortably low on the ground, so you have to stoop to actually read it. It’s an odd placement until you realise its intended audience. The sign is dedicated to a pair of local stray dogs: Bummer and Lazarus, who prowled these streets in the 1860s, inspiring newspaper tales of their canine exploits and a pardon from animal control. It’s affixed at dog height.

It’s hard to believe this sweet little secret exists in downtown San Francisco, arguably the least charming neighbourhood in the city’s roughly seven-by-seven-mile grid. It’s the economic core, a grove of glassy towers where cement is plentiful and there isn’t a Victorian home in sight. It’s also where much of the city spends its days, though most would be just as surprised as I am to discover this plaque and the one-block park that surrounds it. Attached to the Transamerica Pyramid and ringed with redwood trees, it is a privately owned public open space, a POPOS in the local parlance. 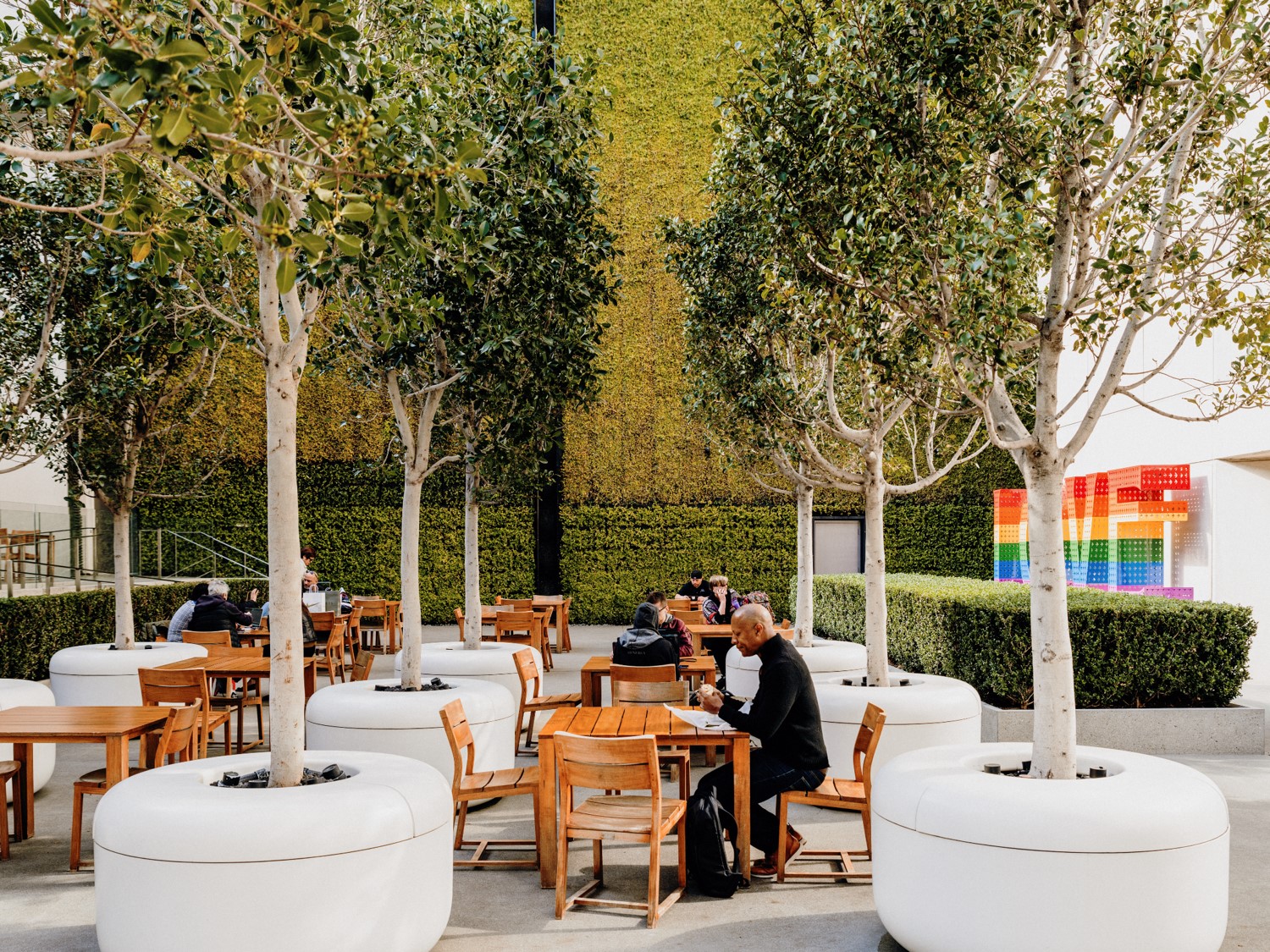 The acronym elicits blank stares, even among locals. And that’s exactly why I’m here, on an urban scavenger hunt to explore the 78 POPOS currently clustered around the Market Street corridor. Created through a mixture of Planning Department incentives and development requirements, they include urban gardens wedged between office buildings, rooftop terraces with wide-angle views, sculpture parks with twinkle lights and more, all owned by private companies but open to anyone who wants to wander in.

“They’re meant to give relief to denser urban environments,” says Maia Small, architect and principal urban designer for the City of San Francisco. “Places where we don’t have as many parks or where we have taller buildings – you get a little more cut off from the natural environment.”

Not all POPOS are created equal, though, and my mission is to find the best ones for every occasion – whether that’s a perfect Instagram shot, some work-day meditation or a slice of forgotten San Francisco history. 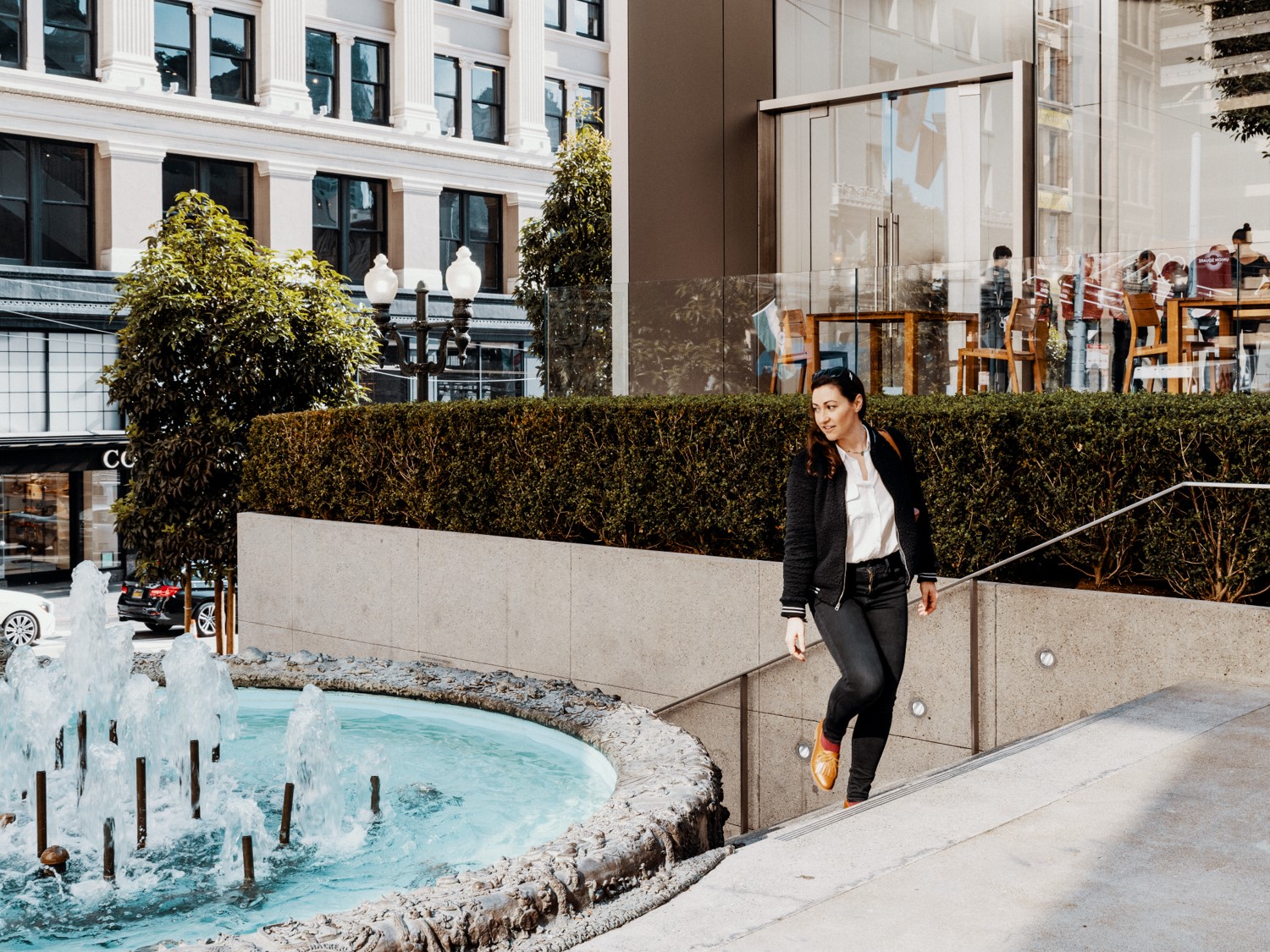 Best for fountains and sculptures

You could easily walk right past this compact park at 300 Post Street and fail to register that it exists. I know because when I find it, slipped between the Union Square Apple Store and the Grand Hyatt, I realise I’ve done just that myself. 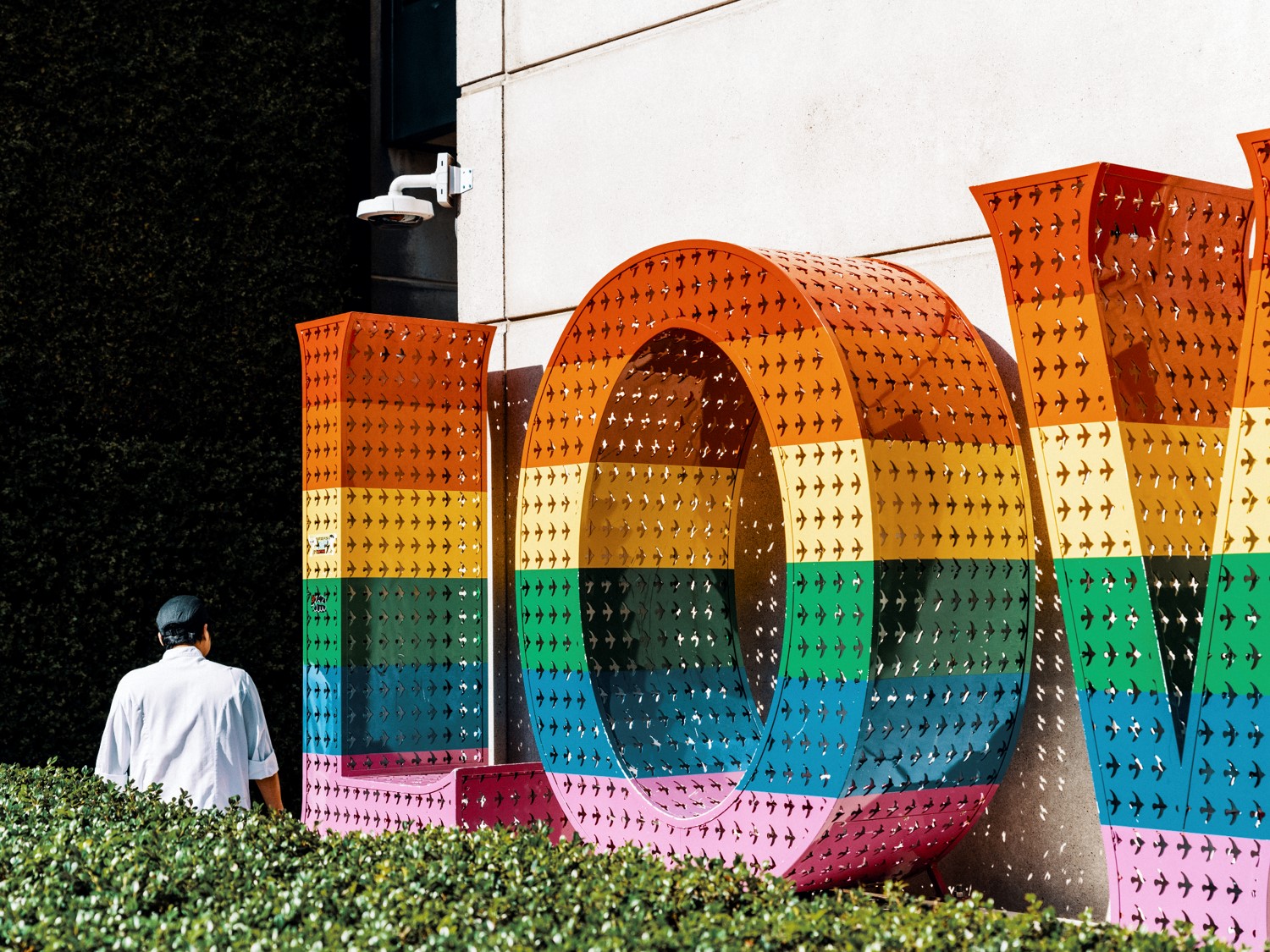 Now that I’m here, however, I’m taken by the serene landscape of potted trees and sculpted hedges, backed by a living wall of tangled leaves. Among the rows of wooden seats and tables, someone’s enjoying an early dim sum lunch while, in one corner, a sculpture by Laura Kimpton spells out “LOVE” in rainbow letters perforated with the shapes of tiny birds. But the park’s prime attraction is at its entrance, where sculptor Ruth Asawa’s San Francisco Fountain is a loving ode to the city, rendering scenes real (Mission Dolores church, the Filbert Steps) and imaginary (Superman!) in bronze. I could stare into its details all day, but there are many more POPOS to explore. 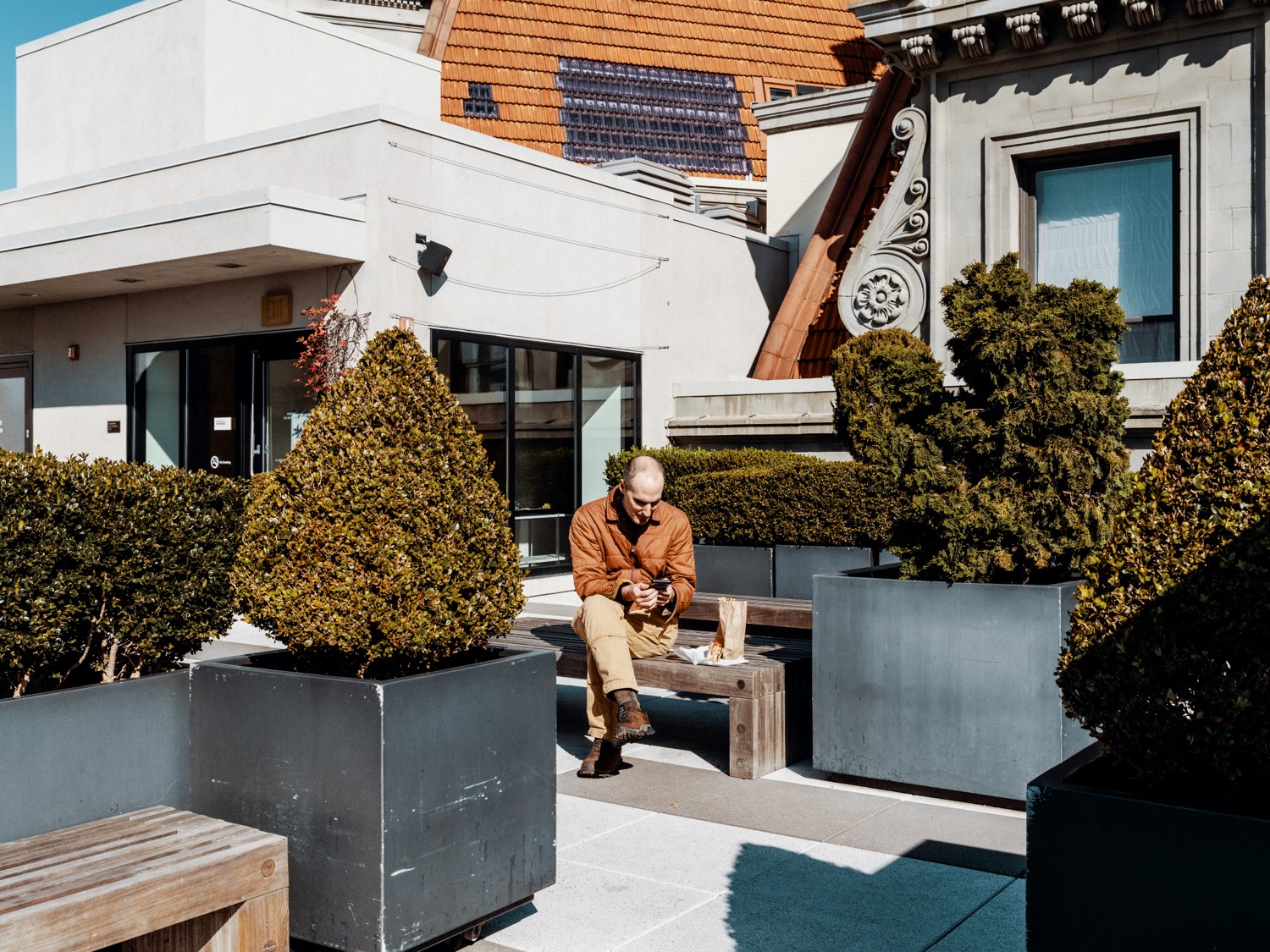 I sign in at the 1 Kearny Street security desk and wait for the guard to wave me into an elevator and up to the 11th floor with a swipe of his badge. The reward for that minor hurdle is a pocket-sized roof deck with panoramic views of Market Street from a vantage point that makes me feel like a pigeon.

From here, I can admire the hideously ornate trim on the building across the street, the smooth curve of Potrero Hill and the oxidised copper on the office roof contrasting nicely with the terra cotta tiles. I’m enjoying a quiet moment when Ben Warfield, an engineer who works down the street, shows up for lunch.

On a good sunny day, he tells me, this is one of his favourite POPOS, a quiet nook that serves as a break from everything around it. “Sometimes it’s hard to find peace and quiet,” he says. 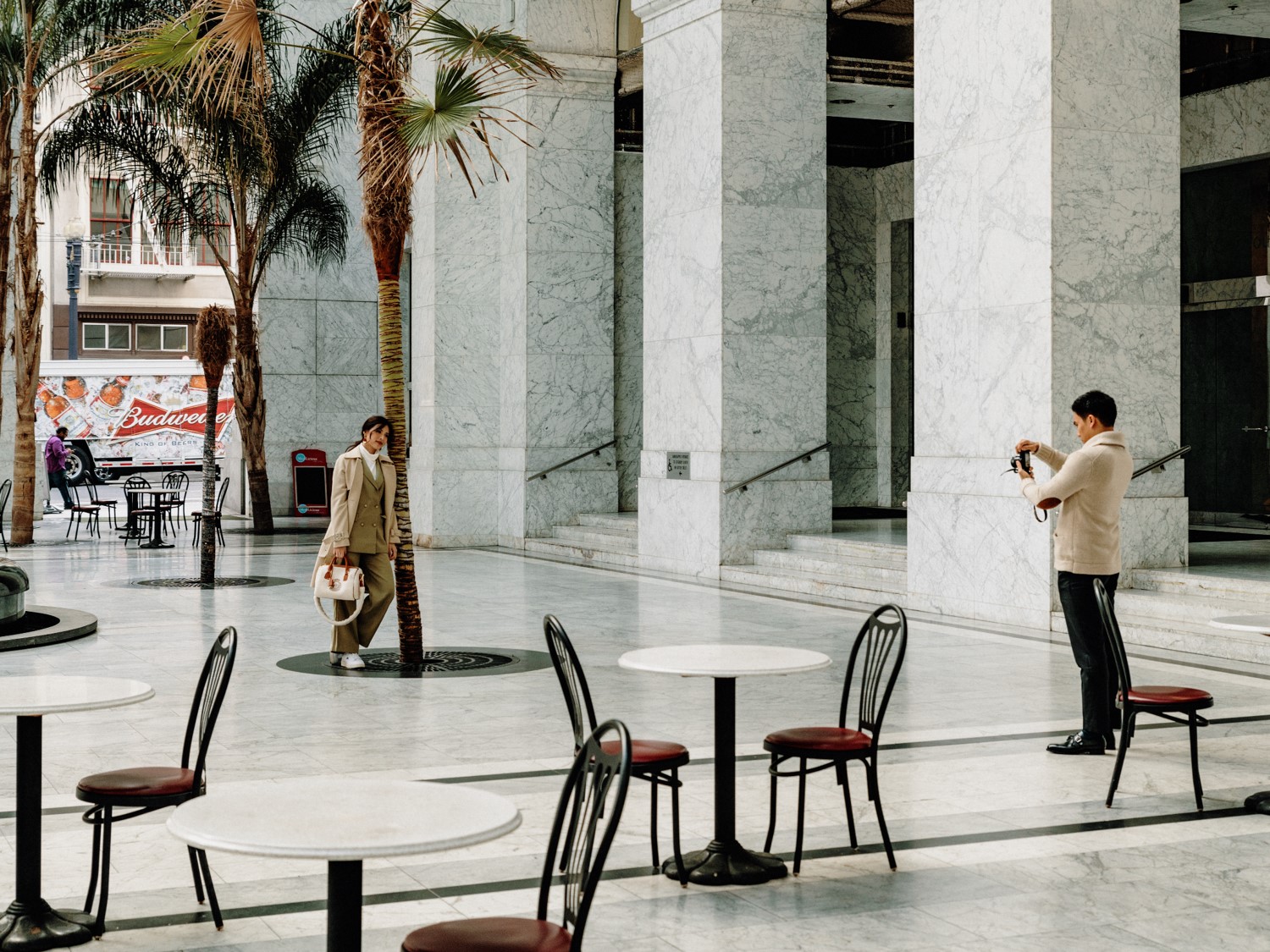 I pick up my own lunch of Thai poached chicken with rice from Rooster & Rice and pass through two mighty Doric columns into an atrium out of a bygone era. That era is early 1900s San Francisco, when the rush of rebuilding after the 1906 quake yielded this Classical gem at 1 Sansome Street by architect Albert Pissis.

Originally home to the Anglo and London Paris National Bank and now part of the Citigroup Center, the granite-clad atrium with its skylight roof and narrow palms sprouting from the floor looks like the setting for a Gatsby-esque fête, but today it’s filled with a less glamorous crowd. People eat out of Tupperware and to-go boxes, order lattes from Moolicious Crepe & Wrap and stare into their phone screens under the gaze of The Star Girl, a celestial-crowned replica of the Star Maiden statues made for the 1915 Panama-Pacific International Exposition. I imagine the crowd rising to launch into a spontaneous song out of a Broadway musical, but everyone just goes on eating.

You may want to know…

Legendary San Francisco Chronicle columnist Herb Caen called the building boom of the 1960s to ’80s a “vertical earthquake” that “destroyed what was left of a tradition and covered it with a new city that bears no resemblance to what had gone before”.

Indeed, before and after pictures of the city skyline are unrecognisable. Like Extreme Makeover: Urban Edition.

It was in that context that the POPOS went from a construction incentive to an official mandate. In 1985, San Francisco adopted the Downtown Plan, “to allow appropriate growth, but to manage vigorously its effects”. The plan turned public open space into a requirement for development, including specific guidelines like minimum square footage, ample seating, landscaping and sunlight.

“It was really built into the thinking of the Downtown Plan,” says Small. The idea was to balance the growth of private offices with public enclaves that allowed people to gather, relax and cross paths, maintaining the crucial social stew of city life. 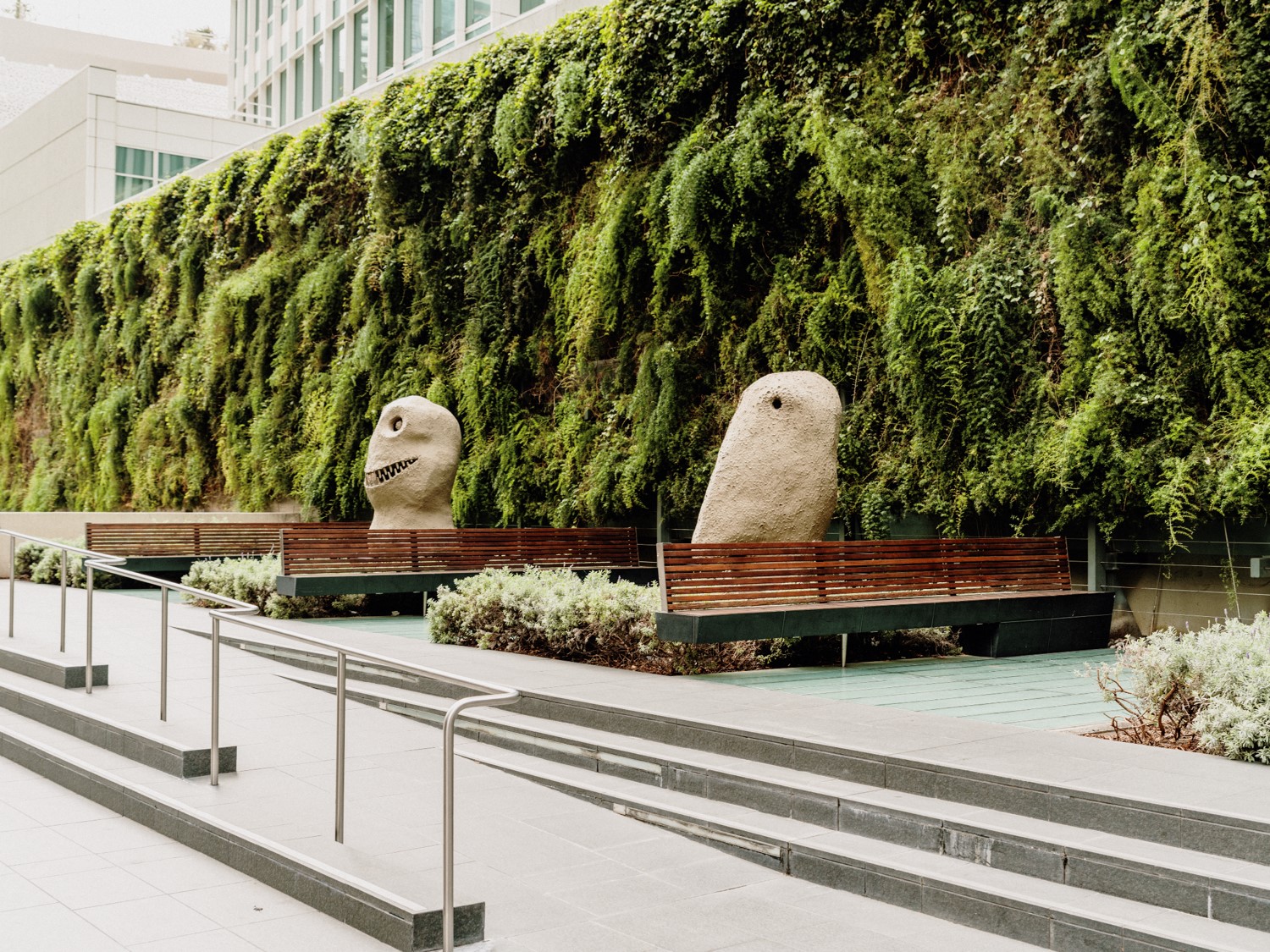 Best for a spot of meditation

Eric Reos is sitting on the corner of a wooden bench, headphones in, eyes closed, opposite a smiley, gap-toothed monster by sculptor Ugo Rondinone. This petite plaza and sculpture garden tucked between a pair of towers at 555 Mission Street is buzzing – co-workers gossiping over cigarettes, someone babbling into an iPhone about blockchain, people snapping photos of the artwork – but Reos doesn’t mind.

“I come here every single day around 2pm,” says the restaurant worker, who moved to the Bay Area a year ago from Michoacán, Mexico. “I do a little meditation. Whenever I feel anxious, I close my eyes and relax and take a deep breath. It feels so good.”

This POPOS, and another across the street with a fountain and stand of bamboo, have become his workday havens between two jobs. “I want more places like this,” he says. Then his break is over, and it’s back to work. 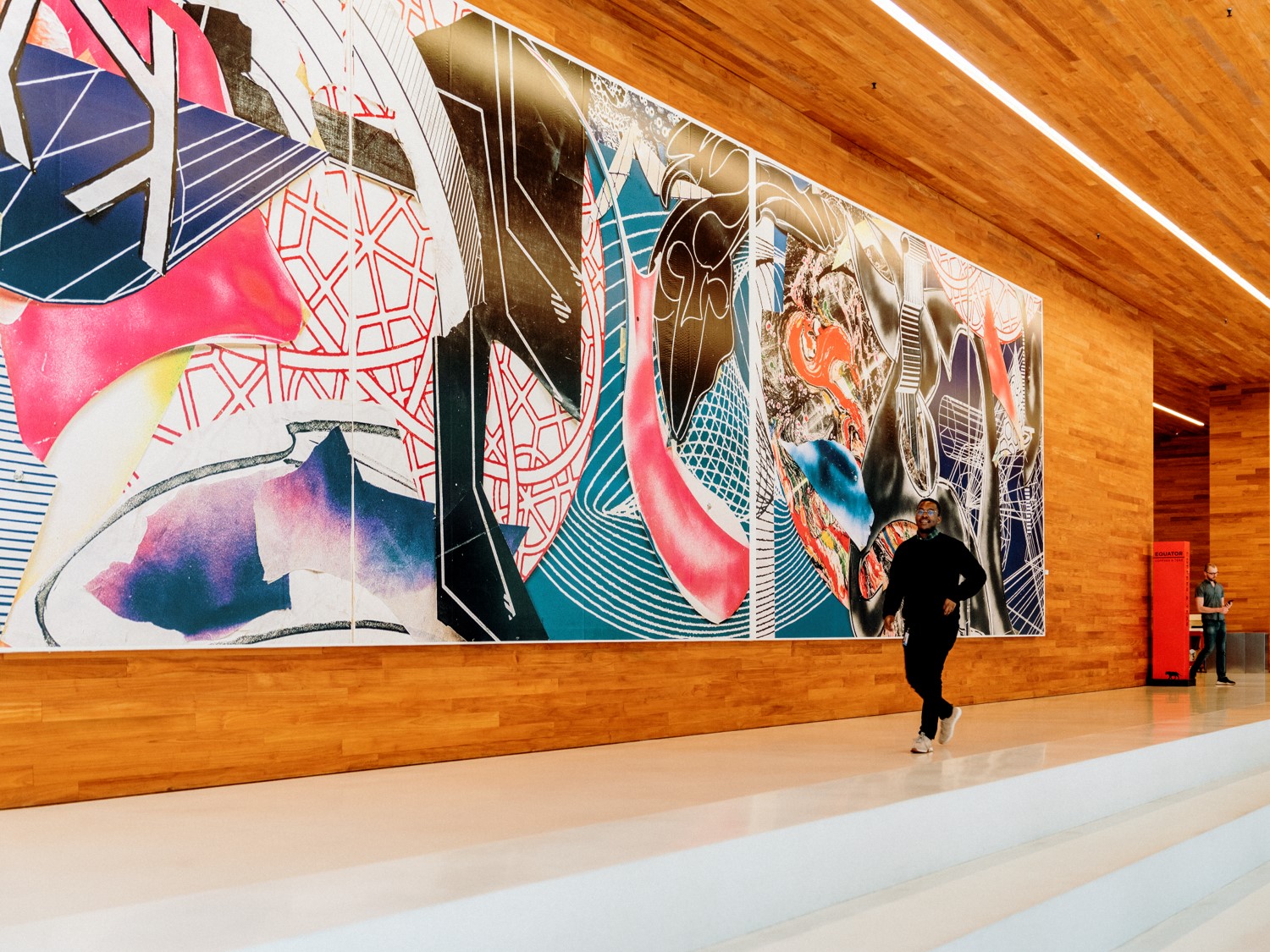 A block away is LinkedIn’s black stack of glass, which opened in 2016 to critiques likening it to Darth Vader, breathing heavily over its more graceful brick neighbours.

But however you feel about the 25 storeys above, 222 Second Street’s first-floor POPOS is a gem – a warm, teak-lined hall that feels like a co-working space or design school student union. I grab a chair at a communal table and spend a while watching the scene – the guy deeply absorbed in a Sudoku puzzle, the pair chatting under a massive “pixel painting” by Frank Stella, the caffeinated crowd fanned out around a counter from Equator Coffees & Teas.

On warmer days, the street-facing walls open up into wide doorways, beckoning passers-by inside, but the only indication that it’s actually open to all are the plaques posted outside, subtle signage with the POPOS logo and accessible hours. 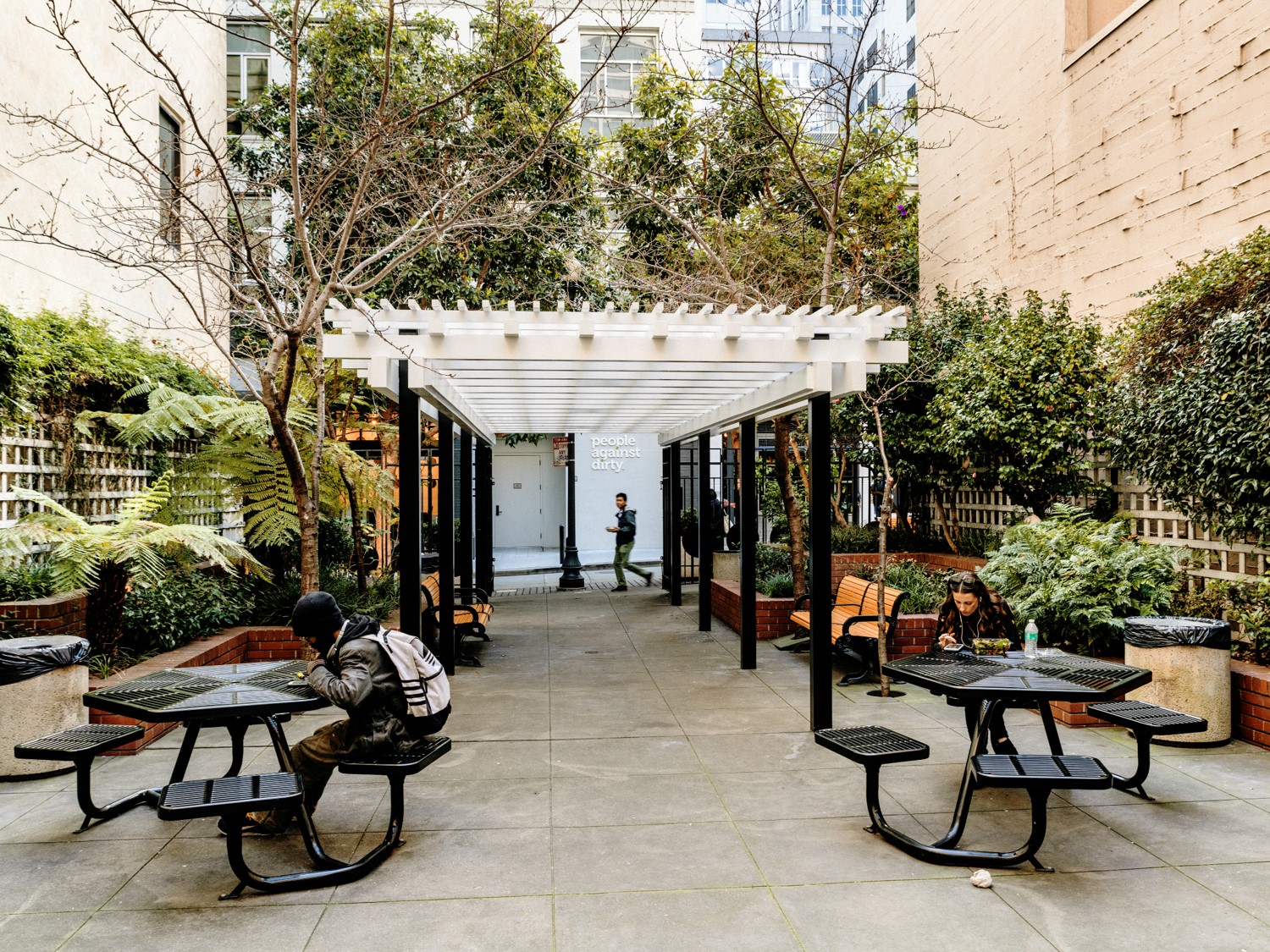 On the edge of the Financial District, where the high-rises fade into historic architecture, is Empire Park at 648 Commercial Street. This intimate POPOS is wedged into a narrow road on the site of the former Eureka Lodgings, a rooming house that counted Emperor Norton among its residents in the late 1800s. A sign in the park commemorates the building and its famous inhabitant, who declared himself the Emperor of the United States and Protector of Mexico despite having no authority over anyone but himself. When he died in 1880, more than 30,000 people attended his funeral.

A man at a nearby table who goes by Chong leans over to comment on this enclave’s remarkable history. I’m sitting in his backyard, he tells me, pointing up at a brick building behind the park. He’s just moved into a room right here, his own small piece of the San Francisco story. “Now I can be Emperor Chong,” he says. 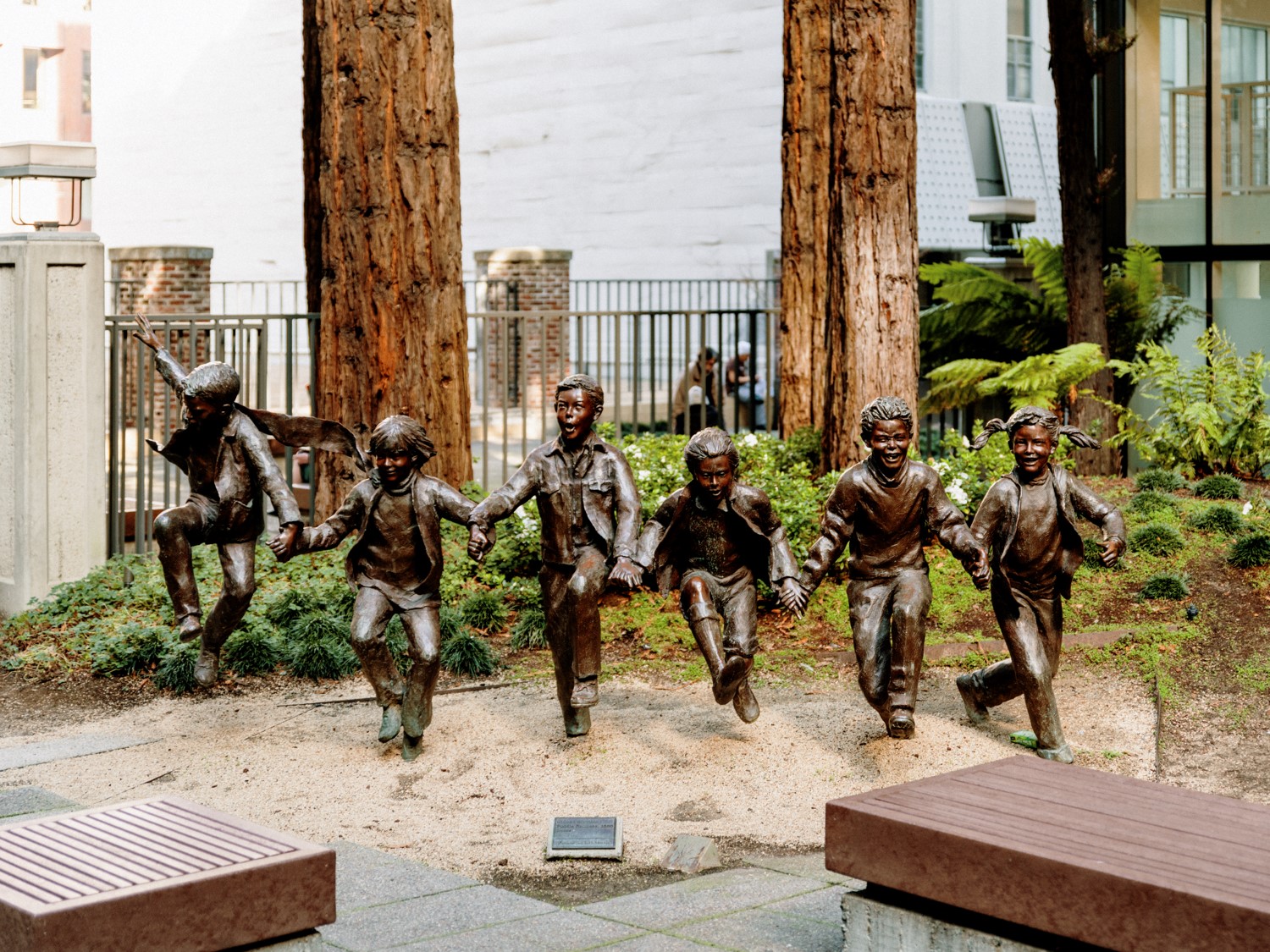 Around the corner, I plop onto a concrete bench at the base of the Transamerica Pyramid inside Transamerica Redwood Park at 600 Montgomery Street, one of the city’s original POPOS. The street sounds are muffled by a burbling fountain and the redwood trees that line the perimeter. The plaque to Bummer and Lazarus sits in one corner, and people are scattered among the various benches, taking a moment of rest.

Over a chat a few days later, Maia Small tells me the POPOS are expanding. “We have about 10 to 12 that are going to be coming.”

Back in the park, a San Francisco City Guide is giving a free tour to a single guest. He invites me over, and as he weaves stories of Mark Twain and the “real” Tom Sawyer, a local firefighter and drinking buddy to the acclaimed author, I watch a hawk ride the thermals through a patch of sunshine next to the Pyramid’s pointy top. A bird of prey flying over a writer searching for peace in the middle of the city – and finding it. 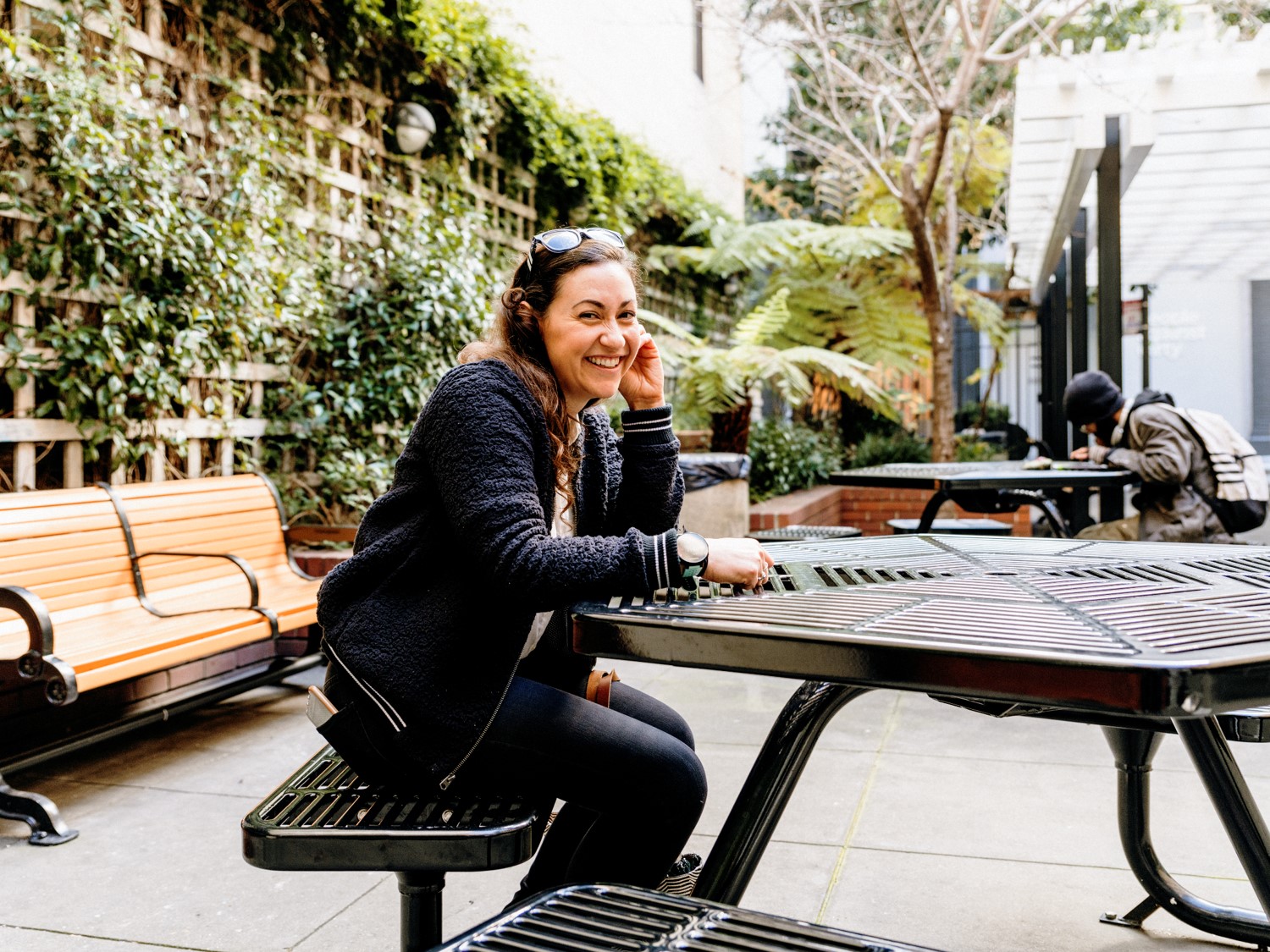 For 45 years Miguel Jara’s Mission taqueria has been turning out some of the city’s best burritos, steaming torpedoes filled with pinto beans, your meat of choice (cough, carnitas) and all the requisite toppings – no rice necessary.

Bangkok-born chef Pim Techamuanvivit uses local ingredients and house-made curries to turn out vibrant Thai food that has earned a Michelin star and a fierce local fan base. 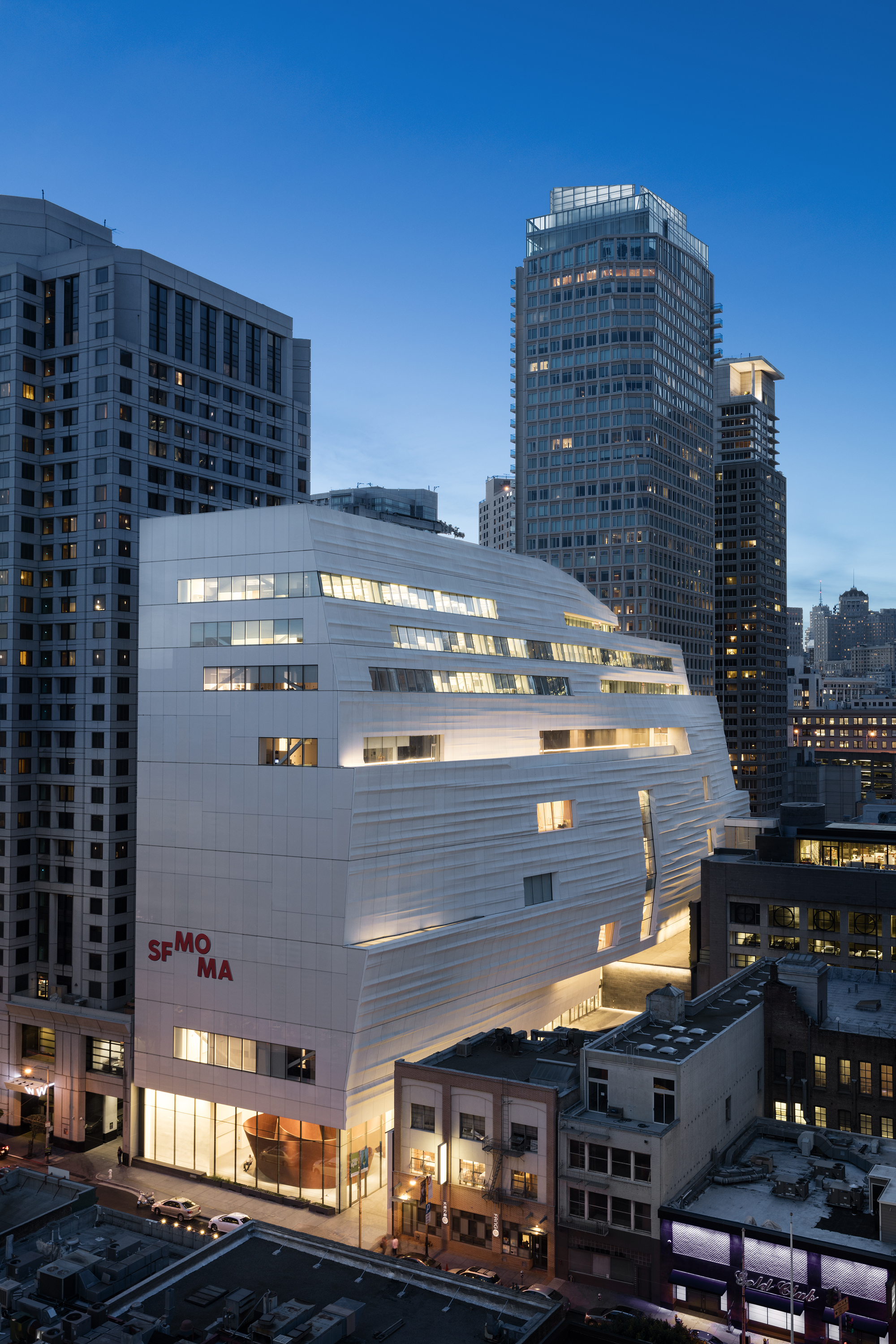 Reopened in 2016 after an extensive expansion by architects Snøhetta and Mario Botta, the new SFMOMA spreads over seven floors of galleries in a building that’s as engaging as the art on the walls.

This steampunk-style bar loves gin. How much? It stocks 600 gins and its 19-page menu includes gin highballs, gin classics, gin martinis, gin and tonics and a poem dedicated to – what else? – gin! 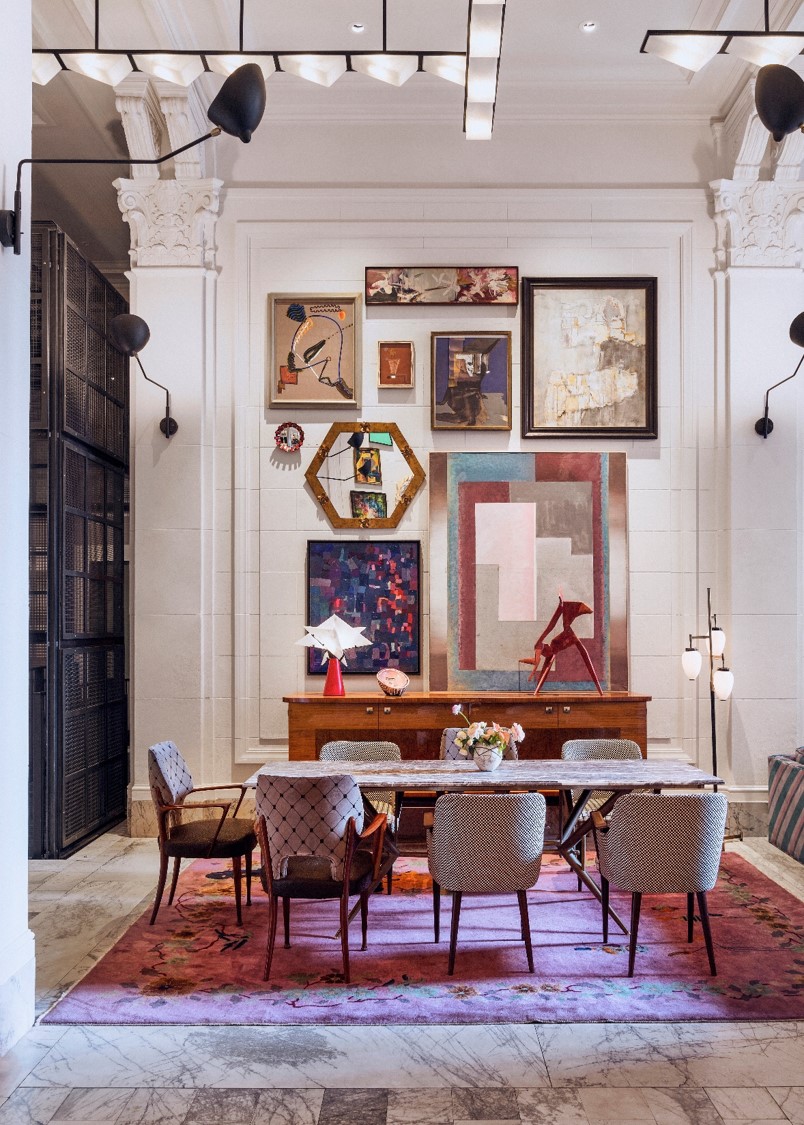 Proper Hotel
The hippest home base in San Francisco is this Civic Center spot with interiors by Kelly Wearstler. Borrow a Shinola bike to explore the city, then get back in time for a cocktail at the rooftop bar.

Hotel Kabuki
Fresh off a $30 million renovation, this pet-friendly Japantown boutique boasts amenities like Peloton bikes and a meditation garden in a historic neighbourhood worth exploring.

Fly to San Francisco with Hong Kong Airlines to uncover the secrets in the city! Click here