Fermentation has been a part of Filipino food culture for centuries, but Manila’s high-concept restaurants are taking this humble technique to the next level, creating surprising flavour profiles in the process. Sanjay Surana takes a bite into the trend 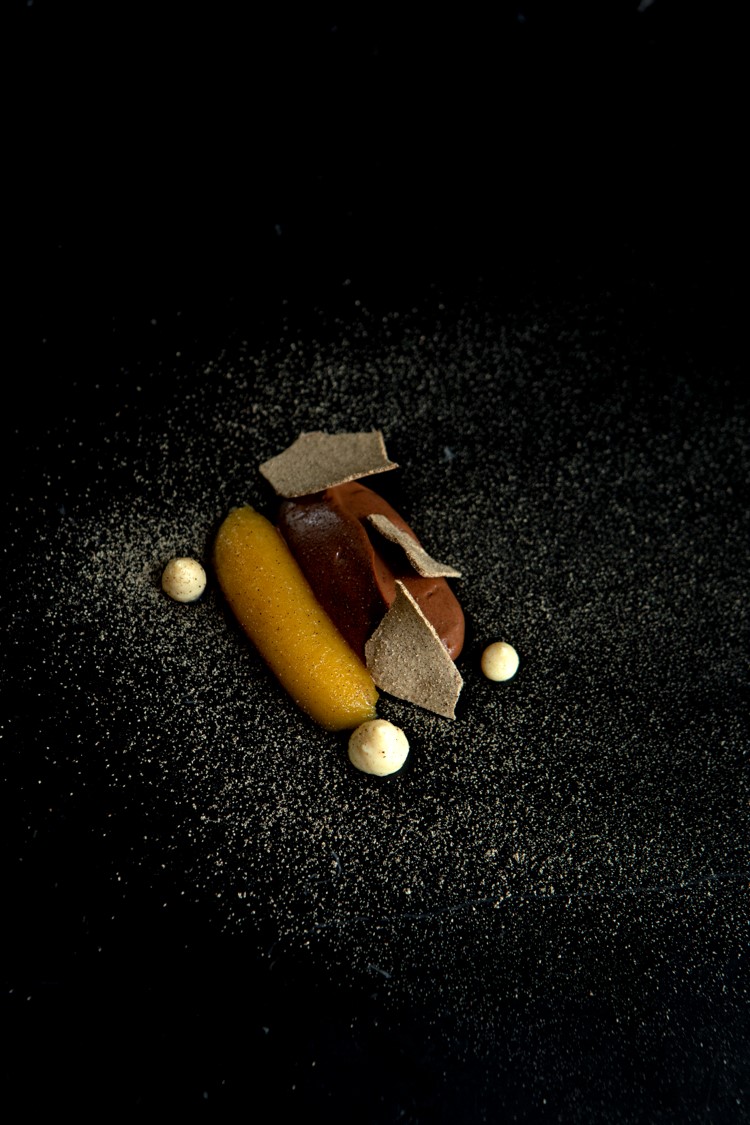 In the upstairs dining room of the minimalist-industrial Toyo Eatery, seated by a large tree-trunk table, Jordy Navarra is holding a five-litre mason jar, pulled from a shelf filled with foods in various stages of fermentation. “These are pajo mangoes,” he explains, “an endemic species from Batangas. We soak them in rice wash and salt and leave them for months.” 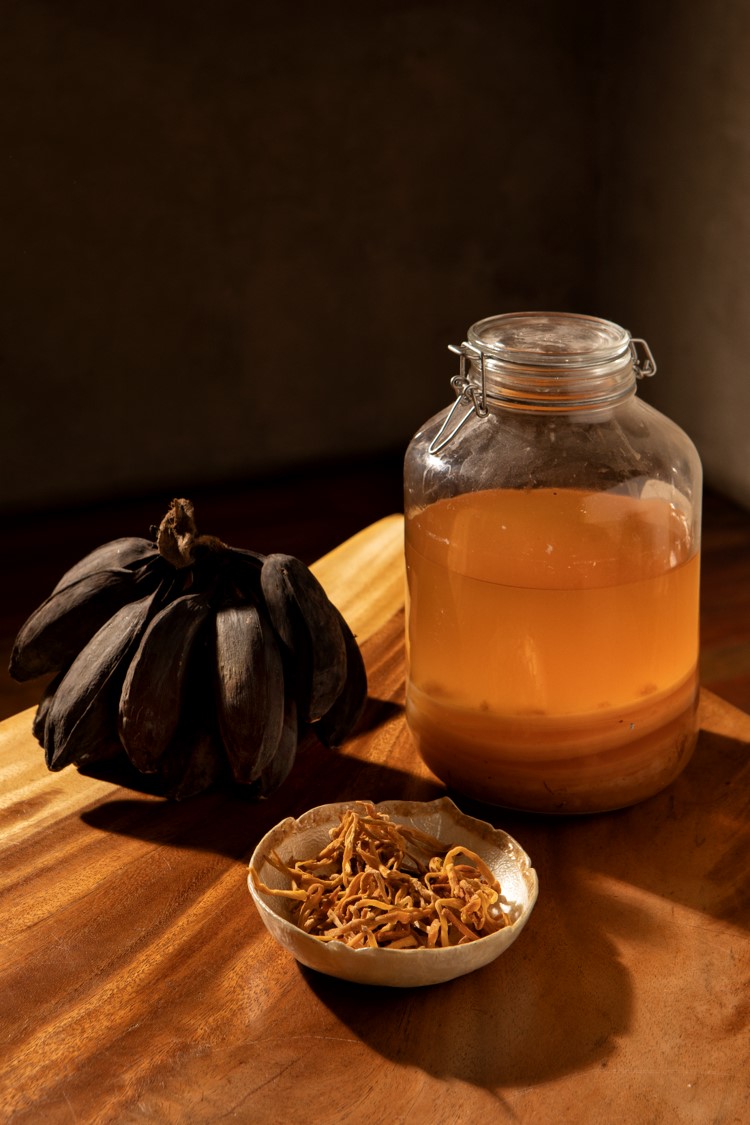 With long hair knotted into a bun and dressed in khaki shorts and a loose blue T-shirt, Navarra has a gentle face and the imposing stature of a rugby player. He is the owner of Toyo – Tagalog for soy sauce, and also slang for crazy – a buzzing restaurant located in a former badminton court on the fringes of Manila’s CBD. Of late, Navarra has become a fermentation champion. He grew up in the Philippine capital, but as a child wasn’t cognisant of the fermentation that took place in his household, and just how many fermented foods Filipinos eat. 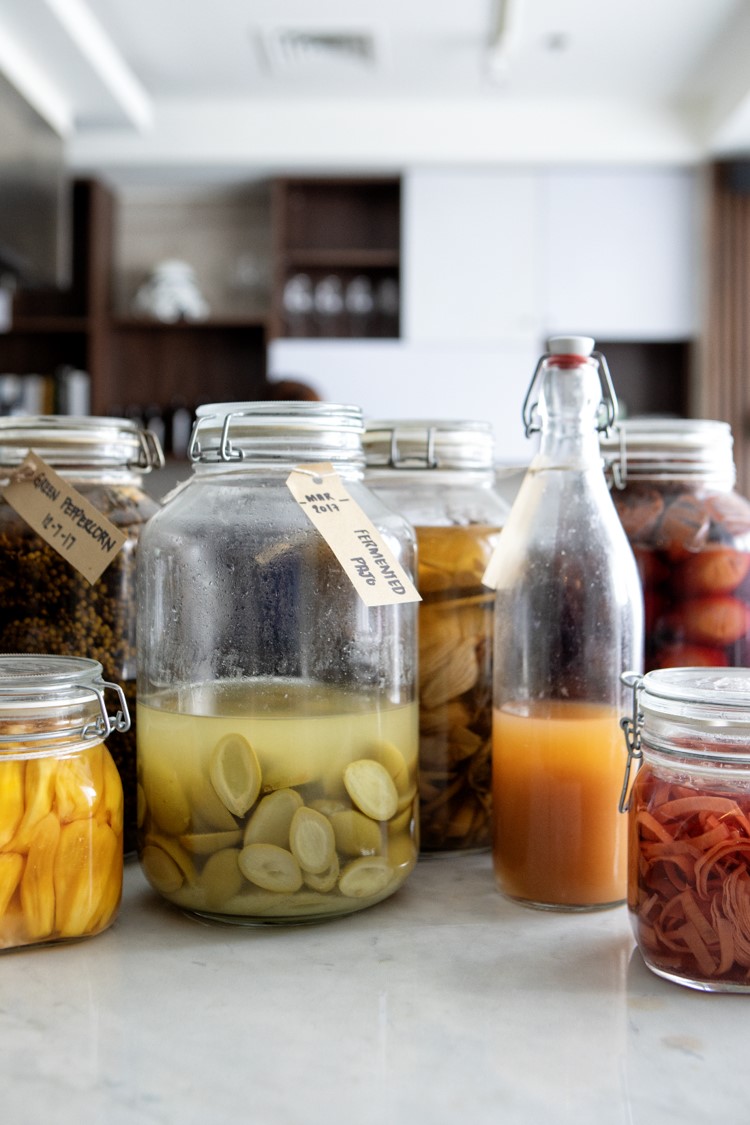 “Fermentation is historically a big part of the flavour profile here. People would say, ‘Oh it’s going bad. Before it does, let’s ferment it.’ I assume when everything was in season there was too much food and fermenting was a way of preserving that food.”

Indeed, fermentation has been a pillar of local cooking for centuries. Even common condiments – soy sauce, fish sauce, vinegar – are fermented products. “Tocino, a breakfast staple, evolved from a cured meat that was supposed to tenderise through lactic fermentation,” explains Clinton Palanca, a food columnist for the Philippine Daily Inquirer. “But the higher up the socioeconomic ladder you go, the less fermented stuff there is because everything is refrigerated. People will drink wine and eat cheese, but not buro (items usually fermented in salt) because it’s for poor people. Our ancestors may have eaten fermented foods, but in the big city, people’s palates have become timid and colonial.” 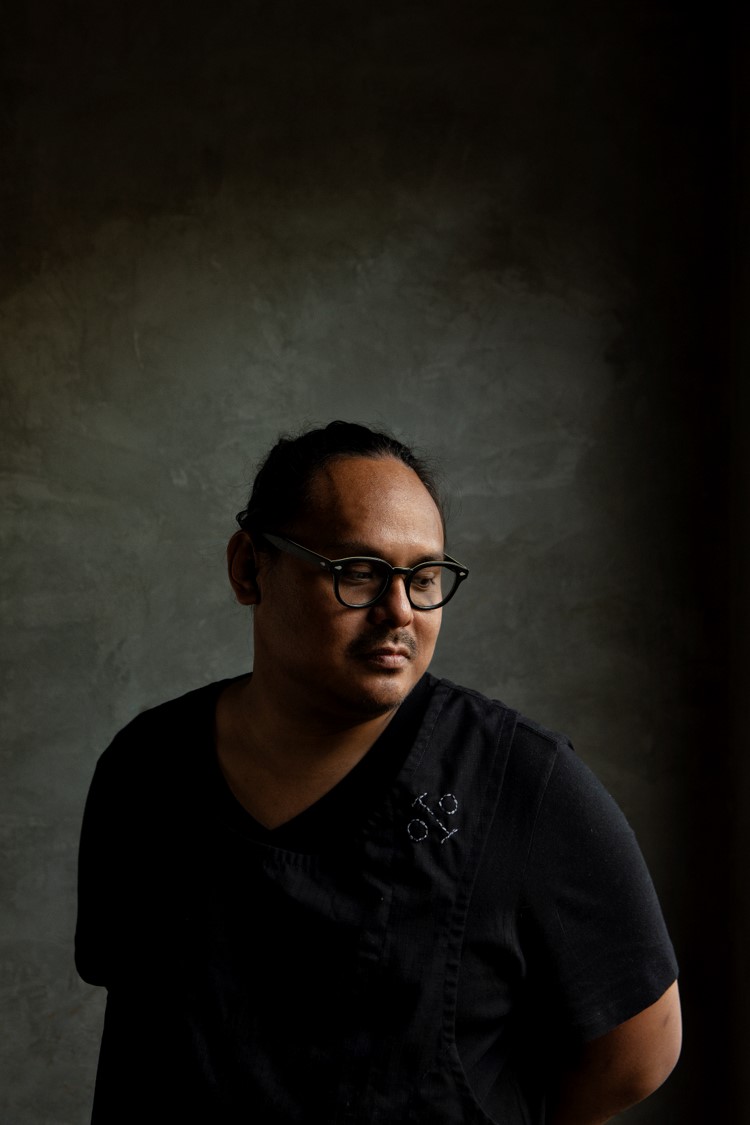 That, however, is beginning to change across the Philippine capital, with a number of chefs rediscovering the complexity produced by this age-old process in their dishes. Palanca believes that this parallels a global trend – Noma in Copenhagen released its guide on fermentation a few months ago – that goes back to the publication of Sandor Katz’s The Art of Fermentation in 2012 or, in the Philippines, arguably when Philippine Fermented Foods by Priscilla Chinte Sanchez came out in 2008. “High-end restaurants have decided that they want to get in on the game,” he says. 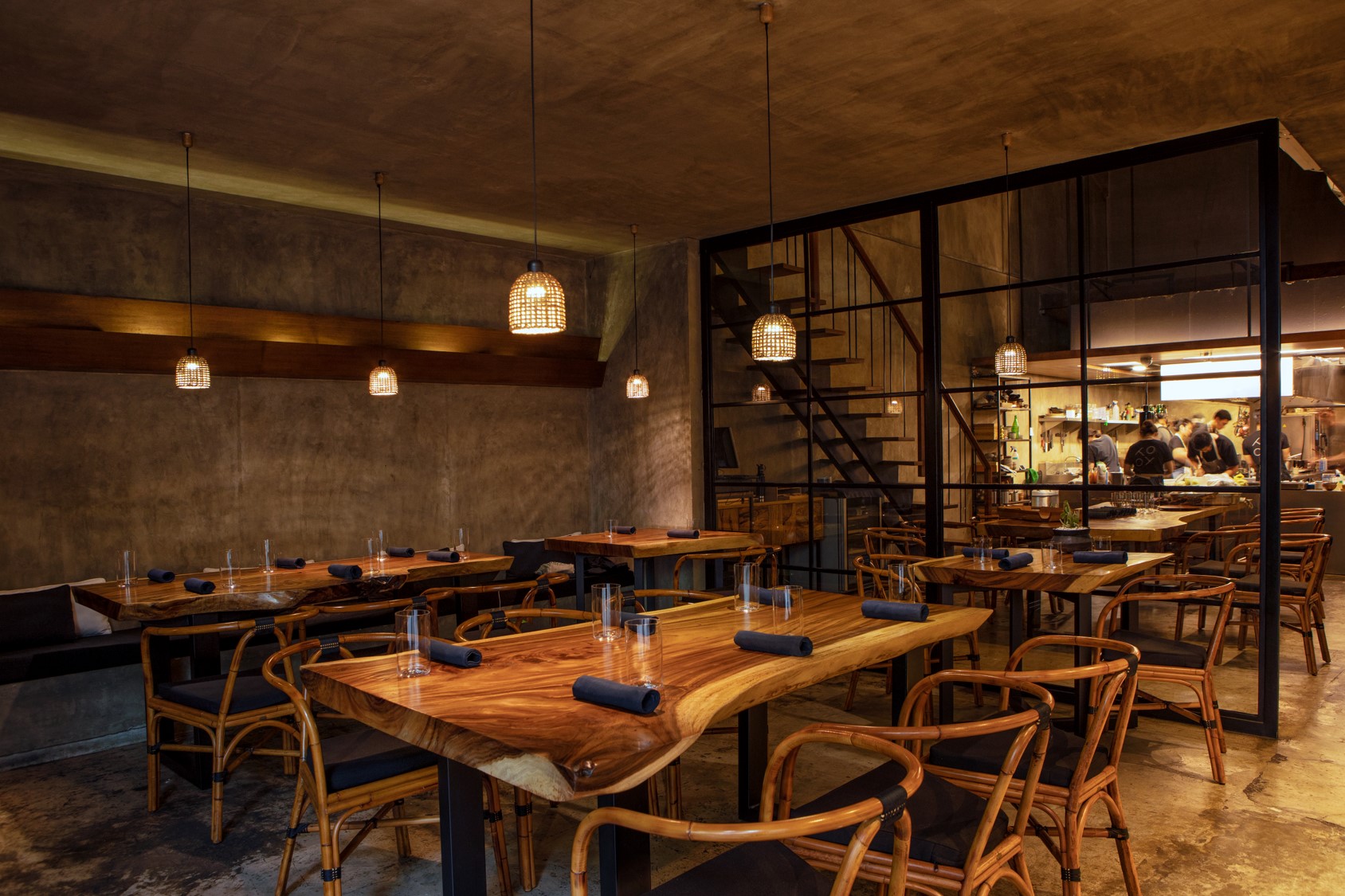 Toyo Eatery, awarded the One to Watch designation in 2018 by Asia’s Best 50 Restaurants, has experimented with fermentation since opening in March 2016. “We’ve had different levels of success – some have worked, some haven’t,” explains Navarra, who worked at triple-Michelin-starred The Fat Duck in the United Kingdom earlier in his career. “Our more traditional ferments started in 2017. We make a bagoong (fish paste) where we salt the krill and leave it for up to 21 days. We want to explore fermentation in a Filipino way, one that is familiar to all of us. Our weather helps things ferment easily,” he notes. 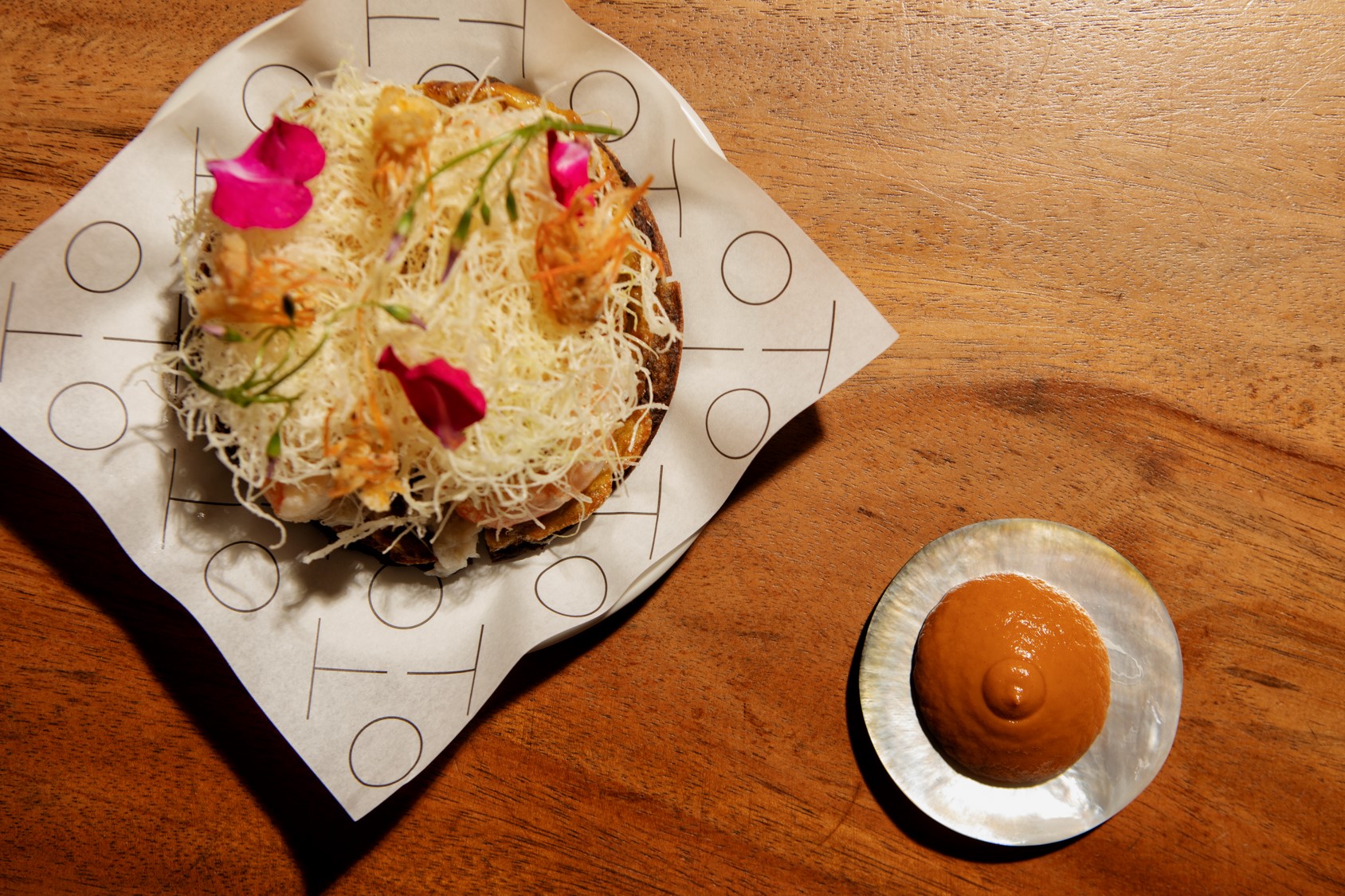 A modern space with concrete walls and floors, small pendant spot-lamps above each solid wooden table and a broad, open kitchen, Toyo is full most nights, with diners coming for the contemporary Filipino haute cuisine. The food here celebrates the typical Filipino flavour profile of sweet, salty, sour and savoury, but dishes are elegantly presented and subtle in their combination of tastes. Toyo’s version of tortang talong (fried eggplant omelette) is made Instagram-ready by edible flowers on top, and I found the restaurant’s accompanying toffee-brown banana ketchup – made with house-fermented banana vinegar – refreshingly delicate, the fruit essence coming through as a light note, unlike the salty, overly spiced, artificially red commercial versions. During dessert, I was surprised to discover the touch of saltiness in the dulce de leche bonbon came from patis (fermented fish sauce) in the ganache.

The subtleness and nuances in flavour provided by fermentation are also evident at Helm, which opened in August 2018 in  Bonifacio Global City. Intimate with a homely ambience – dried flowers in little vases, sheer curtains, rough-granite-effect tile walls – it’s led by British-Filipino dynamo Josh Boutwood. Helm uses the technique generously, evident from the jars of fermenting ingredients arranged on its shelves. Boutwood is a fan of the process as it gives food a solid baseline foundation that he can then build on to construct additional flavours. The menu here changes every four months but what will remain constant is the use of fermented items. 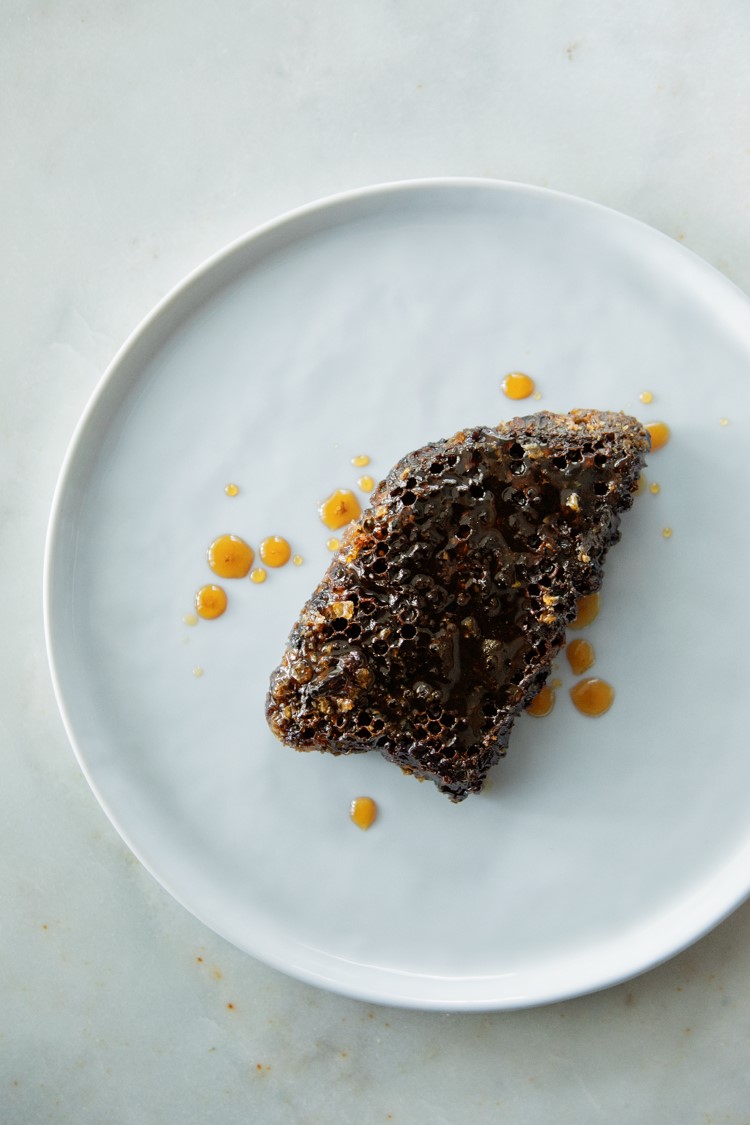 “We ferment fennel roots, purple carrots, sauerkraut, chilli and honey,” says the soft-spoken Boutwood. “Fermentation creates a complex profile, gives depth to a dish, character and personality, and everything else is there for the ride.” At dinner, this is evident in the smoked oysters served with mulberry vinegar, giving the briny mollusc a  rousing kick. Fermentation also extends to drinks, including an addictive watermelon and peppercorn juice with fermented palm sugar that I mulled over for a couple of courses.

He opens a large jar with mouldering honey inside, and a yeasty, Marmite-like whiff rises. “This is three-year-old honey, with no water – it just naturally fermented because of the honeycomb.” When I taste it during the meal, I detect traces of lime and coffee lingering in its sugary body, flavours that evolved and matured through the fermentation process. “We as chefs now see how important it is to get that baseline flavour only available through fermentation,” declares Boutwood. 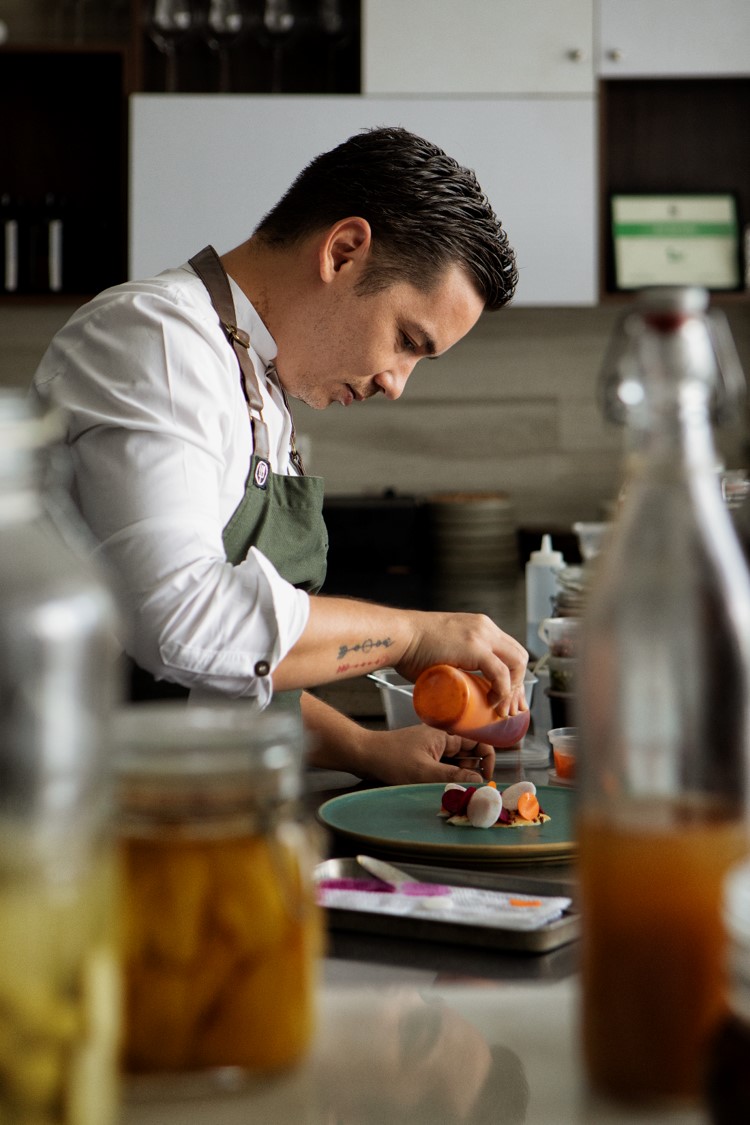 It’s not just the chefs of Filipino heritage that are jumping on the fermentation bandwagon. Spanish chef José Luis “Chele” González runs the high-concept, Philippine-ingredient-driven Gallery by Chele. Formerly Gallery Vask, the restaurant was remodelled and opened in mid-2018 as a warm, organic space, with seats finished in knotted grey wool, tables with bases that look like tree trunks, stoneware crockery and a bar where the top shelf is packed with jars of products fermenting. González, who has worked in superstar restaurants such as El Bulli and Arzak, has lived in the Philippines for six years, travels extensively around its islands and is evangelical about fermentation.

“Since coming here I have studied Filipino flavours, ingredients and techniques. What’s unique is the use of fermentation,” says González, as he clutches a copy of Philippine Fermented Foods. “This book is very technical, but it gives chefs possibilities of what can be done in the Philippines. In my opinion, top restaurants have an obligation to understand the principles and processes of fermentation. It’s another tool they should be able to use in the menu.”

In Studio Lab – a test lab – next to the main dining room, González pulls out a clear plastic container with a tabloid-size slab of gummy material inside. “Nata de coco,” he explains, before demystifying the method of production – it involves mature coconut water, sugar, some acetobacter xylinum bacteria and heat. He opens the lid and a sugary, funky smell rises. “This is the only ferment that creates cellulose. The next step is to do this with pineapple, but it’s less stable,” he explains. The restaurant also ferments kombucha, bitters and ginger for ginger beer at the bar and mangoes soaked in beer and salt (“a family recipe from one of our chefs,” González divulges). 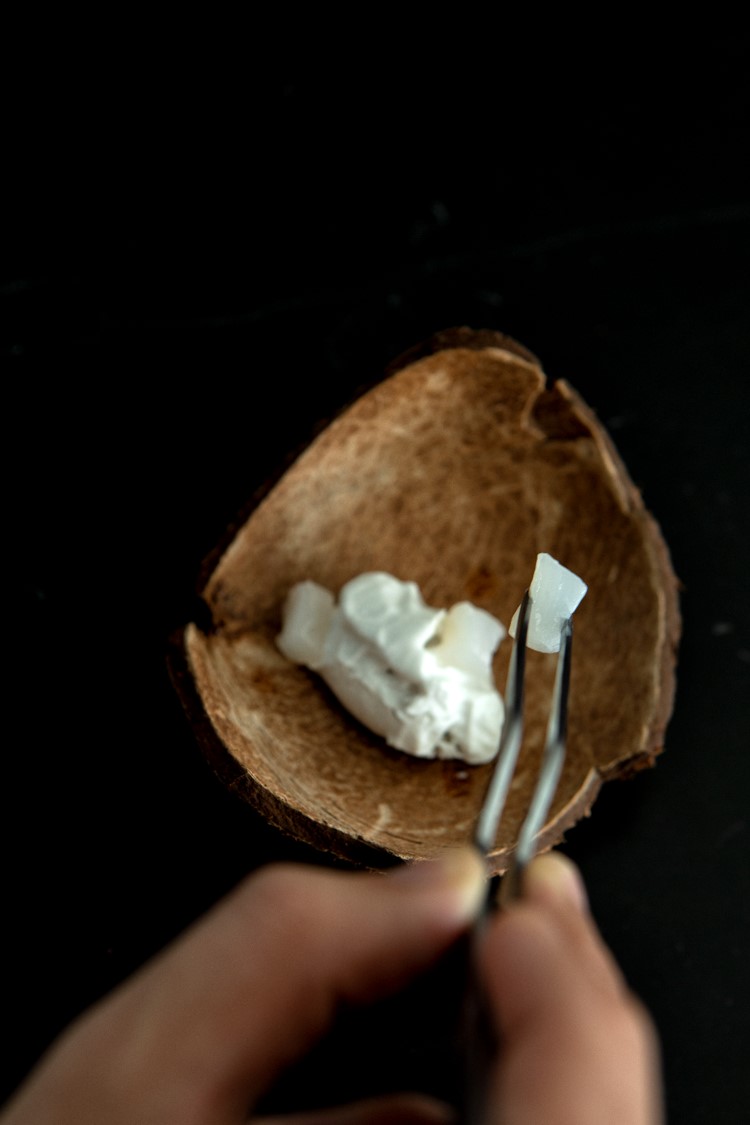 The allure of those ingredients – apart from the beef, everything served here is sourced from the archipelago – is evident in the menu. During my meal, a tomato mochi made with carabao (water buffalo) milk, laced with dried fish and thickened with citrus to the consistency of cream cheese, explodes in my mouth before melting in a riot of competing yet complementary components and tastes. I can distinguish the ferment in the soft, creamy tofu on my tongue in the dish La Guava, the chef’s play on gazpacho, served with tomato, guava, the herb pansit-pansitan – which is grown on the restaurant’s terrace garden – and hints of ginger that warm the palate. 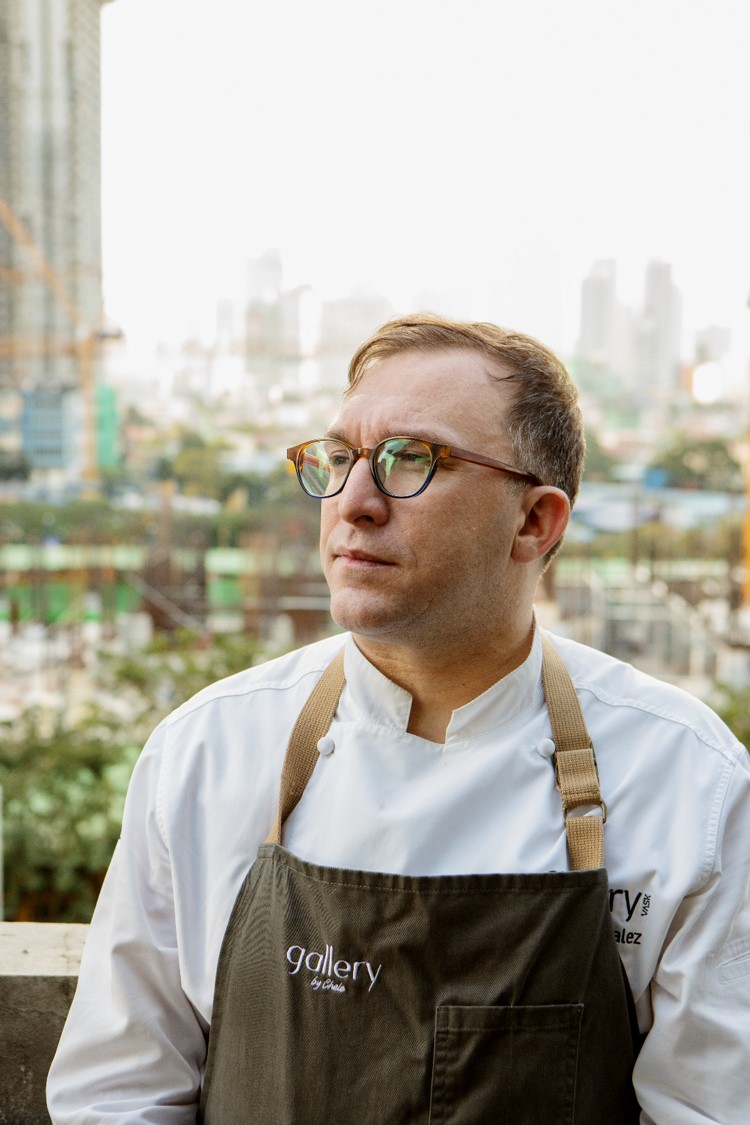 I reflect on the multi-layered meal and how a centuries-old technique borne from necessity has informed much of this contemporary food – it might even be why Filipino food will be celebrated at an international level in the near future. Fermentation is as relevant today as it was hundreds of years ago, and it’s not hard to imagine Manila broadcasting the concept on a grander scale, with kombucha bars and kefir entrepreneurs popping up in the city’s hip locales. “We think Philippine ingredients are ready to be pushed to the next level,” González said to me earlier in the test kitchen. It probably won’t be long before heirloom rice from Benguet, cacao from Davao, pili nuts from Bicol and the country’s historic approaches and preparation are weaved into avant-garde dishes that garner global attention.

+ An at-a-glance look at Manila’s top places to wine and dine, shop and rest your head 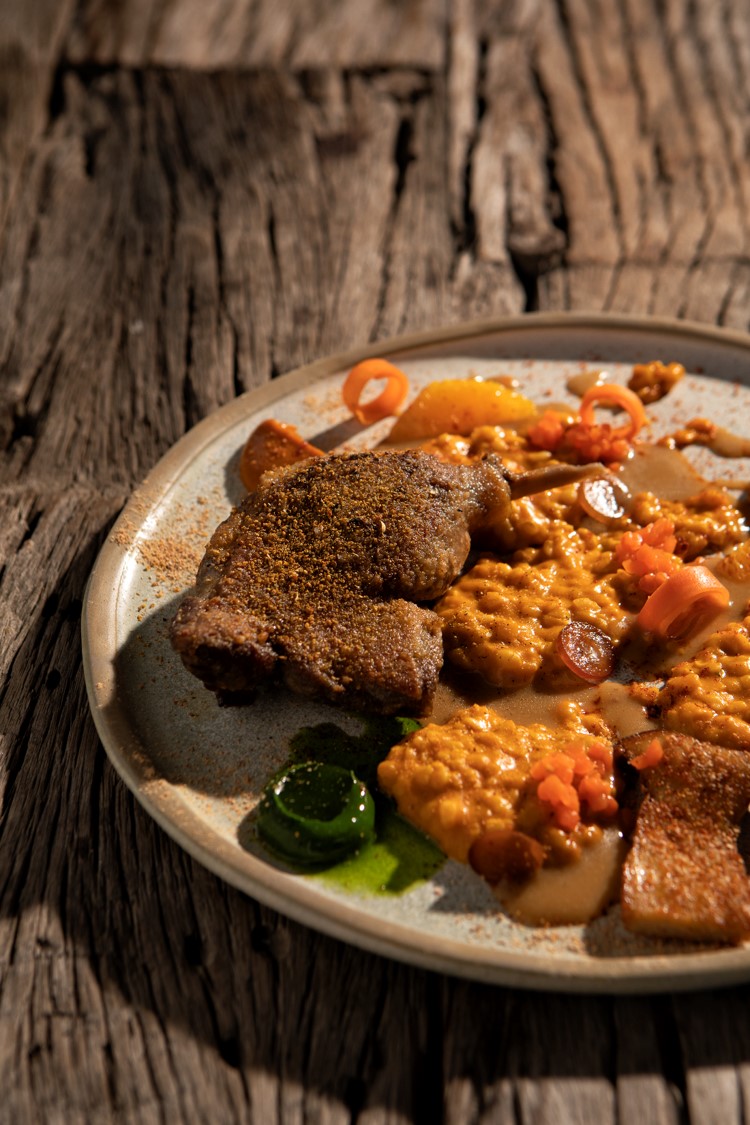 Serving up contemporary Filipino cuisine, Toyo has caught the attention of international
media. Reservations are required. 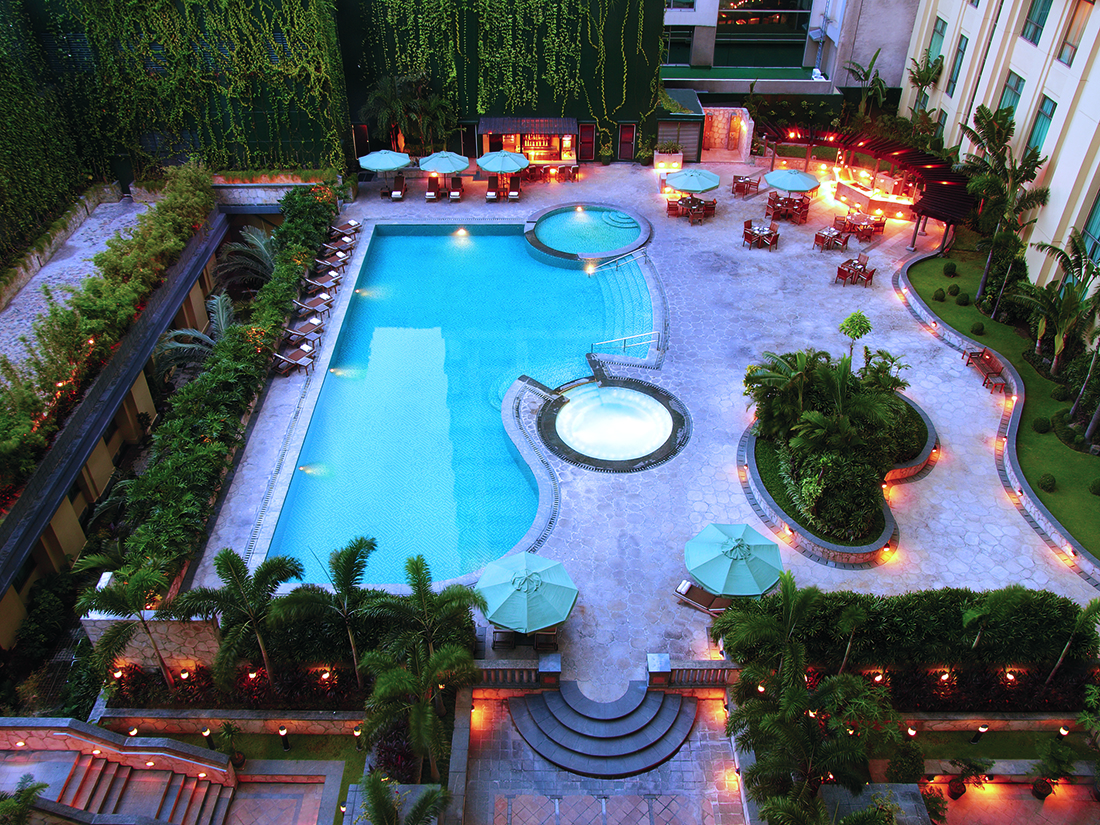 AG New World Manila Bay
With a jazzy green-glass entrance, and views of the bay, the hotel is well-located for visitors travelling to points within the city. 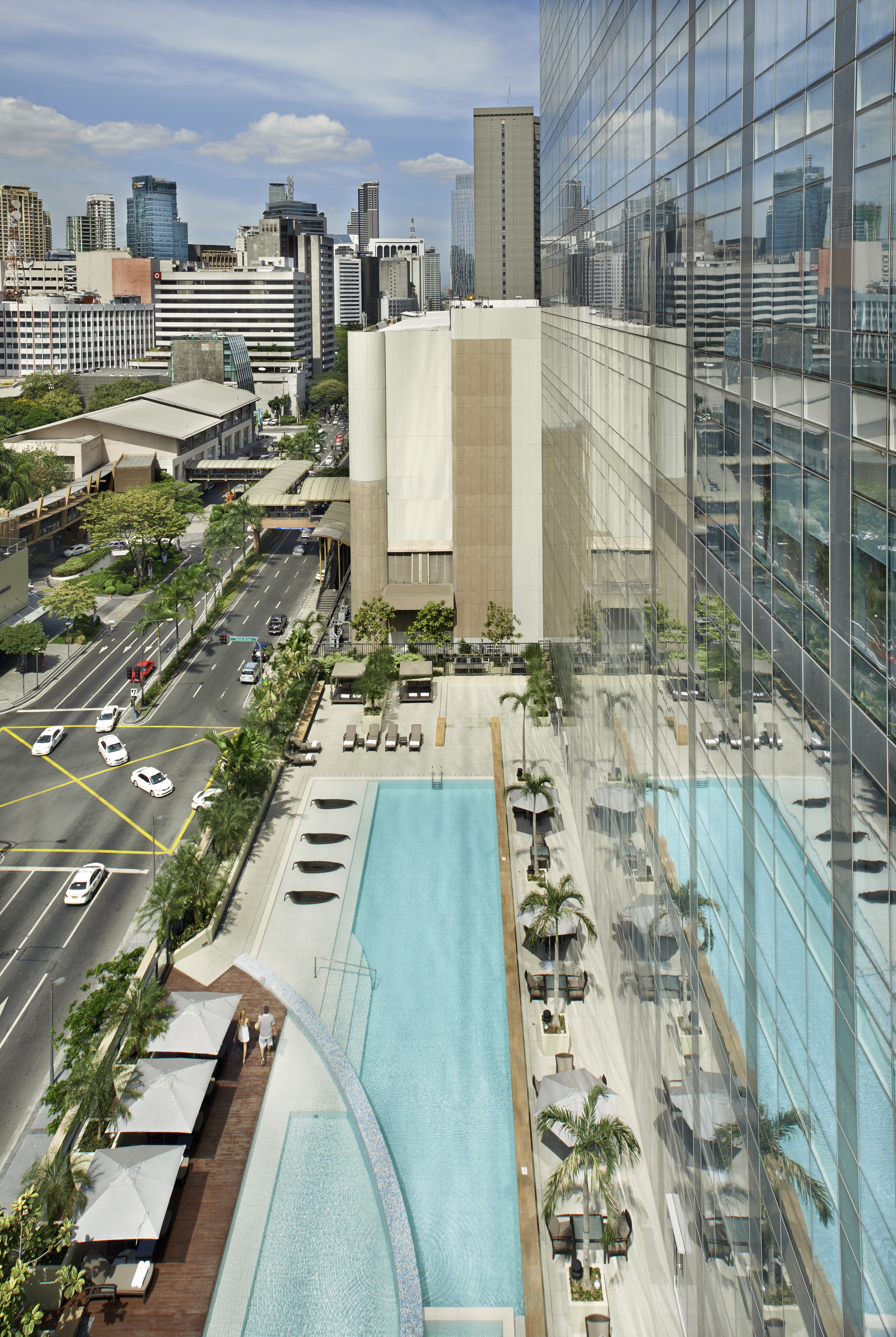 Fairmont Makati
With a prime position in the business district, Fairmont Makati is also a great location for shoppers, close to a row of malls and across from the vast Greenbelt shopping complex.

This recently opened cocktail bar is situated in happening Poblacion, and the upstairs garden-style terrace is a verdant escape in the city. Try the tangy Cheshire Cat cocktail, made with tequila-infused pomelo, citrus and grapefruit bitters.

Located close to Toyo Eatery, this space houses a number of art galleries and the art shop Aphro, where eclectic and whimsical pieces by Filipino artists are for sale.