Artist Song Peilun is the gatekeeper of the mystical Yelang Valley in China’s Guizhou province, known for its stone-carved figures. As he approaches his 80th birthday, he speaks to Jamie Fullerton about the future of the sculpture park

These are Miao people – they’re more open-minded than most in China,” says Song Peilun, tilting his phone to show me a photo of a group of nearly naked twentysomethings dancing around a flaming pyre. 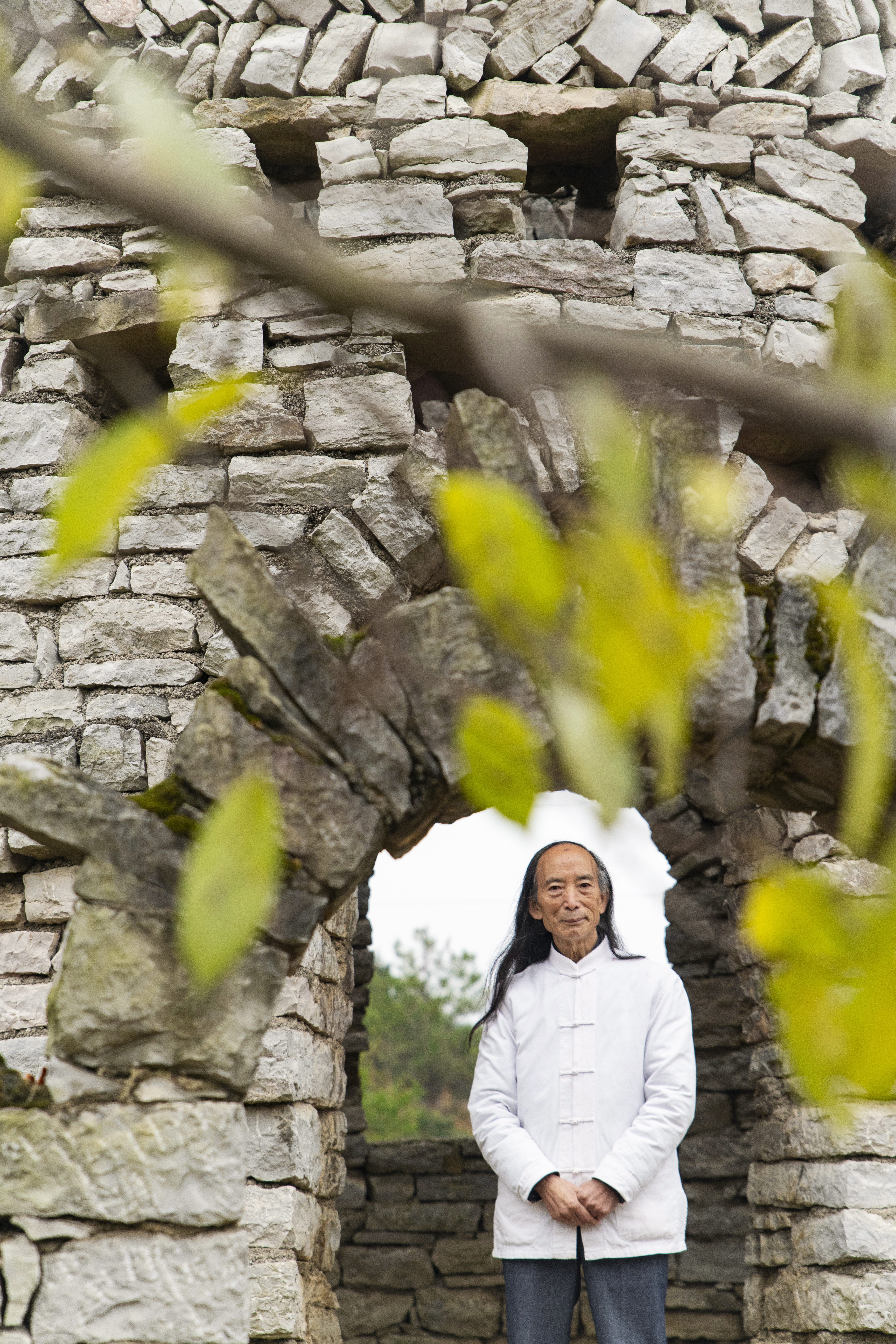 With a waterfall of black hair brushing against his traditional white tunic, the impish, 79-year-old artist finger-swipes his phone. More bare bodies of Miao people are revealed on screen in snapshots of grass skirts, smoke clouds and hands ritualistically raised to the sky. Also in the pictures are stone humanoid faces glaring at the dancers – tombstone teeth, chimney noses and blue-painted goggle eyes jutting dramatically from the bizarre structures.

The scenes bring to mind the moai statues of Easter Island, but the photos were taken in Yelang Valley, Song’s 20ha sculpture park located just south of Guiyang, the capital city of Guizhou province.

The Miao make up one of the largest ethnic minority groups in southwest China’s Guizhou province and these kinds of images are emblematic of their culture, which some historians estimate dates back 5,000 years in China. According to Miao lore, supernatural forces breeze through the world, and spirits can be contacted through rituals. Throughout the culture’s history, animals, trees and stones have been worshipped, explaining one aspect of Song’s photos. 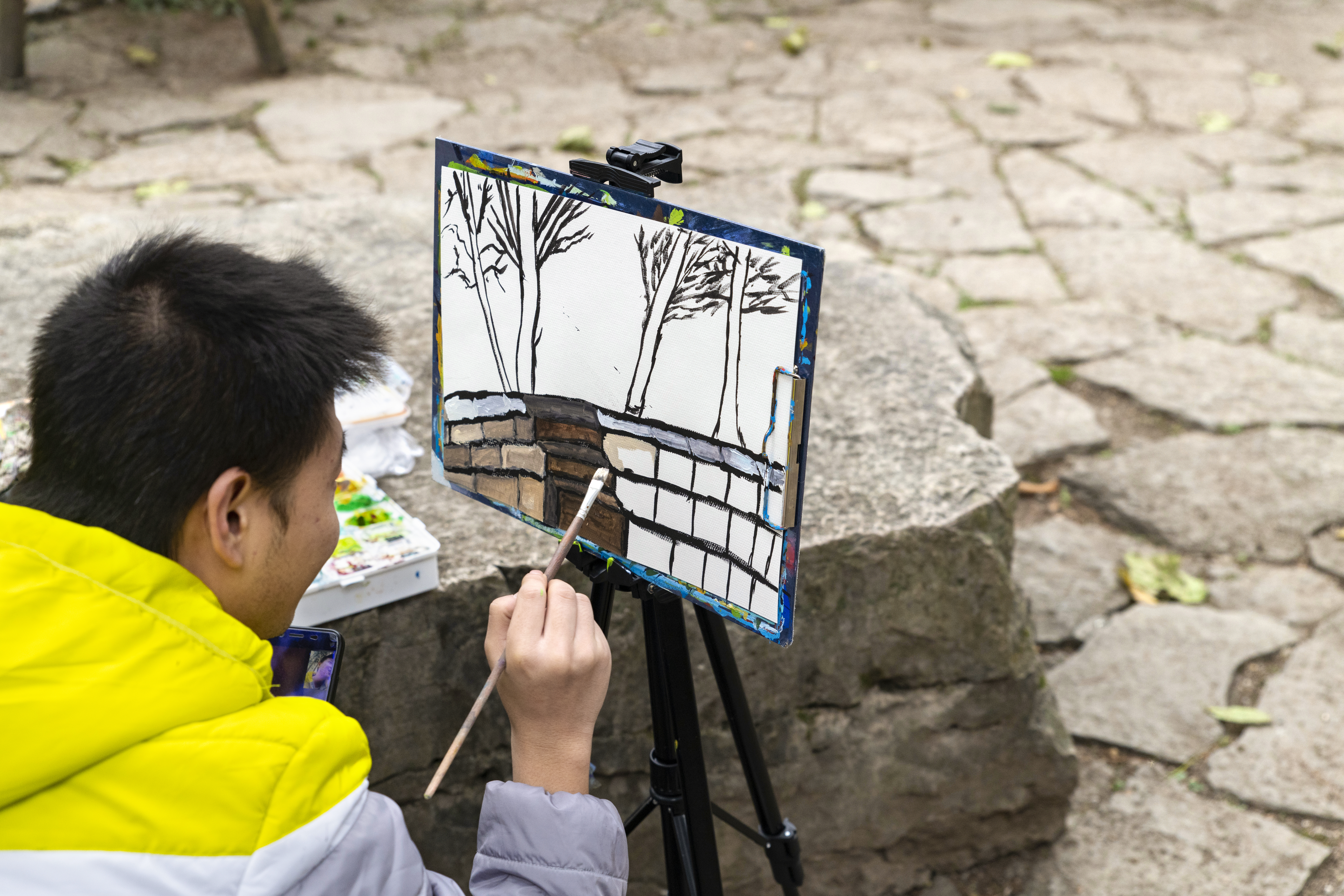 Highway signs signal the turnoff to the park, but this is not your average day trip destination. Founded in 1997, Yelang Valley features hundreds of stone sculptures of faces envisaged by Song, a former professional artist and art teacher, then constructed under his supervision by local farmers from the Miao and Buyi ethnic groups. Reaching the winter of his life and with no completion point for the park in sight, Song has been compared to Catalan architect Antoni Gaudí, whose iconic Sagrada Familia in Barcelona remains unfinished almost a century after his death.

Arriving at the park, a short drive from Guiyang’s 4.3 million population buzz, I enter a mist of arty ambience. Students from the city’s colleges dab brushes at their canvases, rendering the more regal-faced sculptures lining the river that runs through the main park area. Craggy staircases lead to arched doorframes and rustic huts are reached by stoop-walking through rocky tunnels. Song’s mongrel dog Ba Dou sniffs the base of a throne made from crudely piled stones, sticks and tyres. With their bulbous, cartoonish features, some of the sculptures seem descended from Homer Simpson, while others look like African tribal masks. 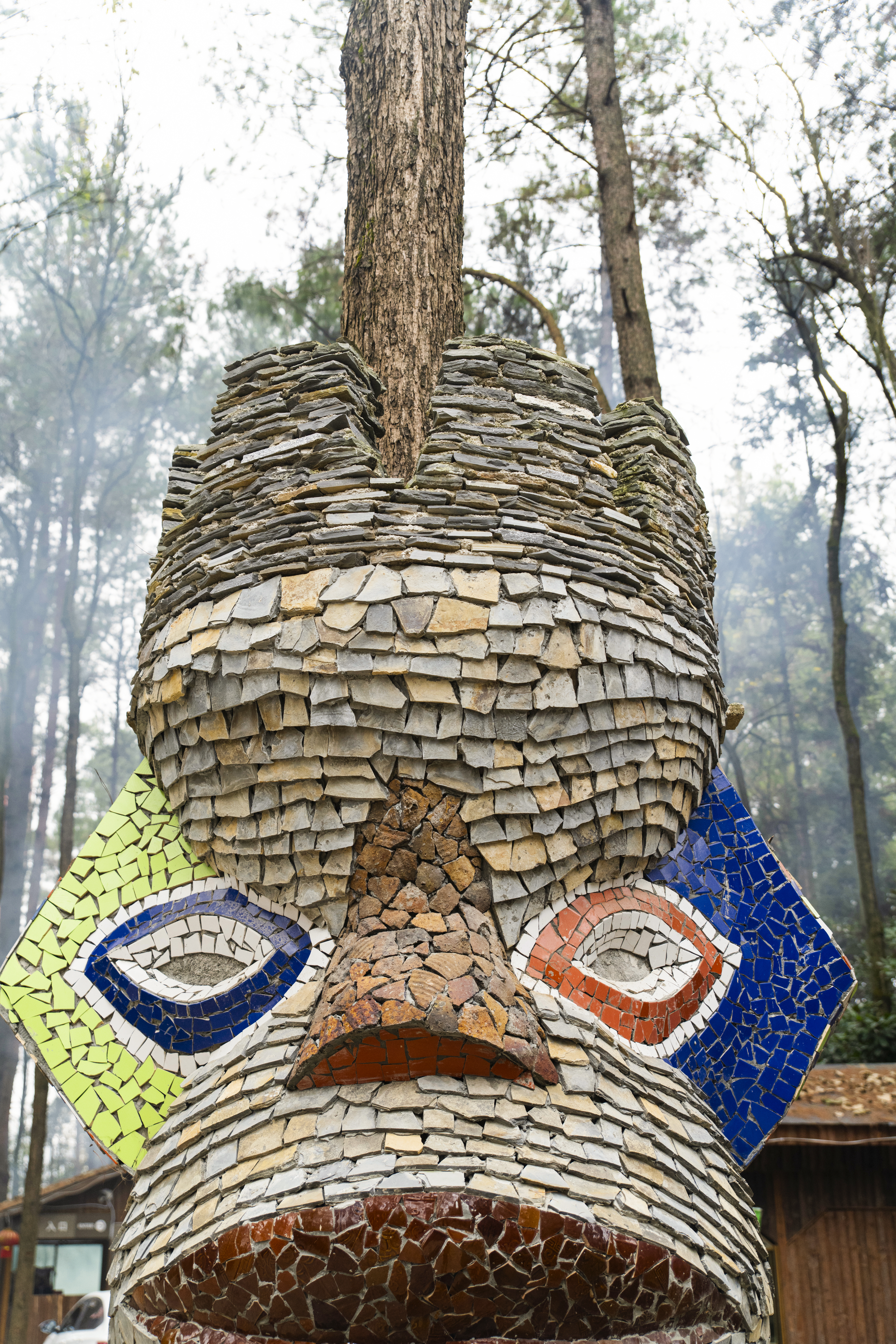 Speaking over the tapping of stone workers building his latest sculptures, Guizhou-born Song says that his stone faces were inspired by props worn in the mysticism-tinged performance style of Nuo opera, traditionally significant to Miao people. The performances are characterised by garish wooden masks depicting gods, and are believed by many performers to drive away devils.

“Nuo opera is much older than Peking opera,” says Song, who is Han Chinese and was exposed to Miao culture early in life due to its prevalence in his home province. “People didn’t understand the nature of life in the past. Through Nuo they were able to communicate with heaven and Earth. The performers were considered the bridge between them.”

After quitting teaching in 1988 and helping to set up an artist zone in Guiyang, Song was hired in the US to work on theme parks depicting traditional Chinese elements. Following his return to China he craved a more personal large-scale project. Inspired by the Nuo style he’d seen in Guizhou, in 1997 he rented the land Yelang Valley lies on.

According to Song, some locals called him crazy for renting the non-arable land, but the stones strewn around it were part of his plan. He hired local Miao and Buyi farmers – skilled in stonework from having built their own farm buildings for generations – to piece together his first faces. As rock piles gradually became ears, eyes, noses and mouths, Yelang Valley was born. 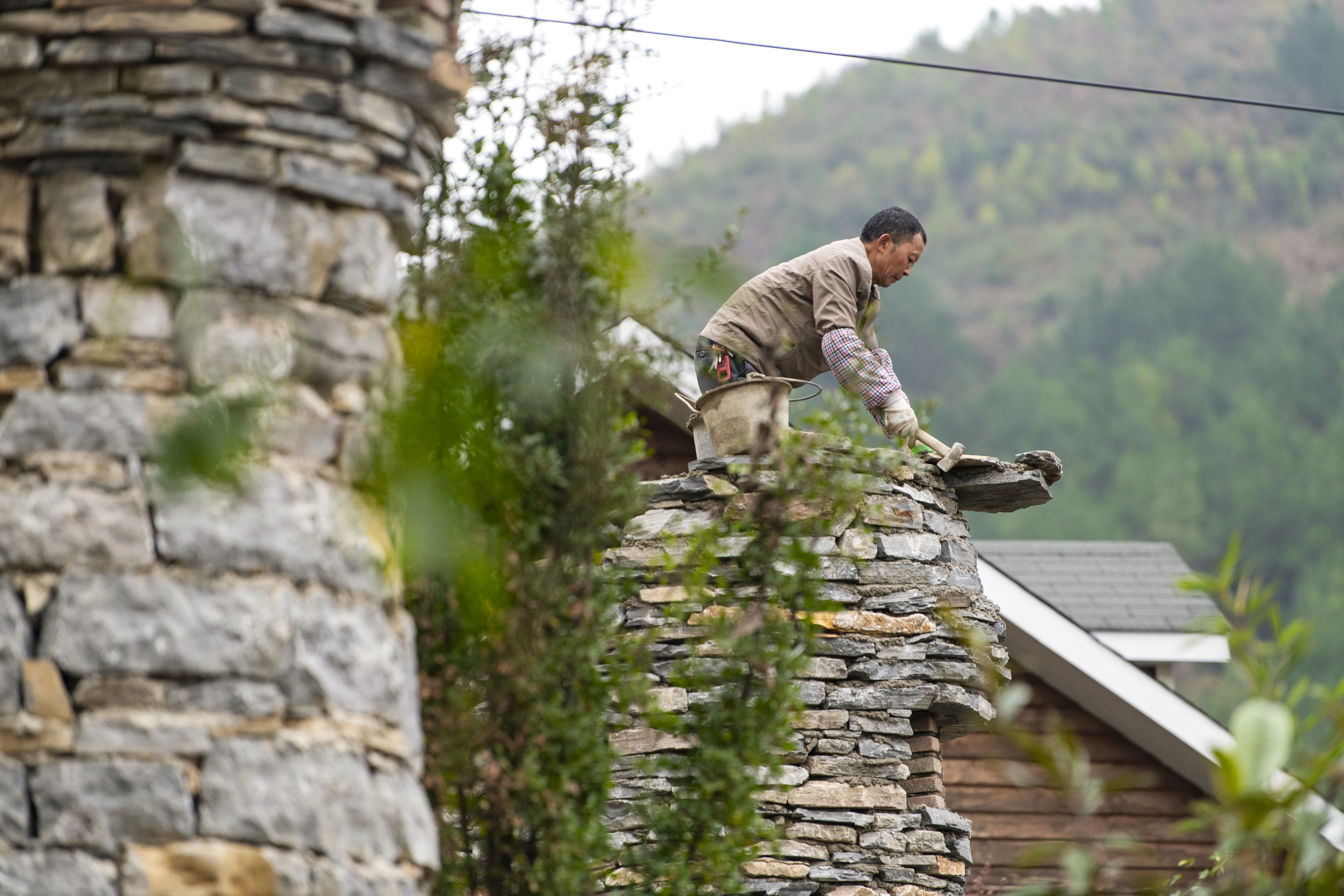 The imperfect method of making a sculpture with stone slabs, rather than chiselling from a single large stone, made many of the works look endearingly childish. “I wanted them to be primitive and crude – that’s why I worked with farmers,” says Song, gazing down from a turret-like building overlooking his rigid silent army. “Art school students wouldn’t create the same effect. You can’t call someone a master just because they went to university.”

Statements such as these help explain the loyalty Song has earned from the stone workers, up to 20 of whom work at the park at a time. He pays them a modest day rate and they work when they find time away from the fields. Some even forfeit payment, knowing that Song is not rich. He charges visitors just 20 yuan to enter the park and hangs up the phone on offers of investment, fearing the commercialisation of his vision. Rather than a garish gift shop, two years ago he opened an art gallery on site, inviting artists from around the world to stay at the park for free.

In increasingly commercialised China, where domestic tourism is booming along with the theme park industry, Yelang Valley is wonderfully unique. Song turns 80 this year, and fans of his work have wondered what will happen to his park when he is gone. The commercial calls keep coming, and the city is encroaching on Song’s peaceful enclave. Old residential buildings around the park are being demolished to make way for luxury flats. A new dormitory block housing students from Guizhou University of Finance and Economics juts into the skyline above the stone faces, as does the university’s sports stadium.

If Song is worried about this, he’s not letting on. “It’s not something I can control,” he says. And though he has a daughter, he’s certainly not concerned enough to put rigid succession plans in place. “I don’t think about whether my work is able to last or be passed down. This is a pursuit, a dream.”

As we talk, two Miao musicians, one parping a bamboo pipe lusheng, the other making melodic squeals by blowing through a folded leaf, arrive to provide a jolly soundtrack to our short walk to Song’s house. Cats paw ankles for attention in the warm, wood-walled chalet as my host pours green tea. 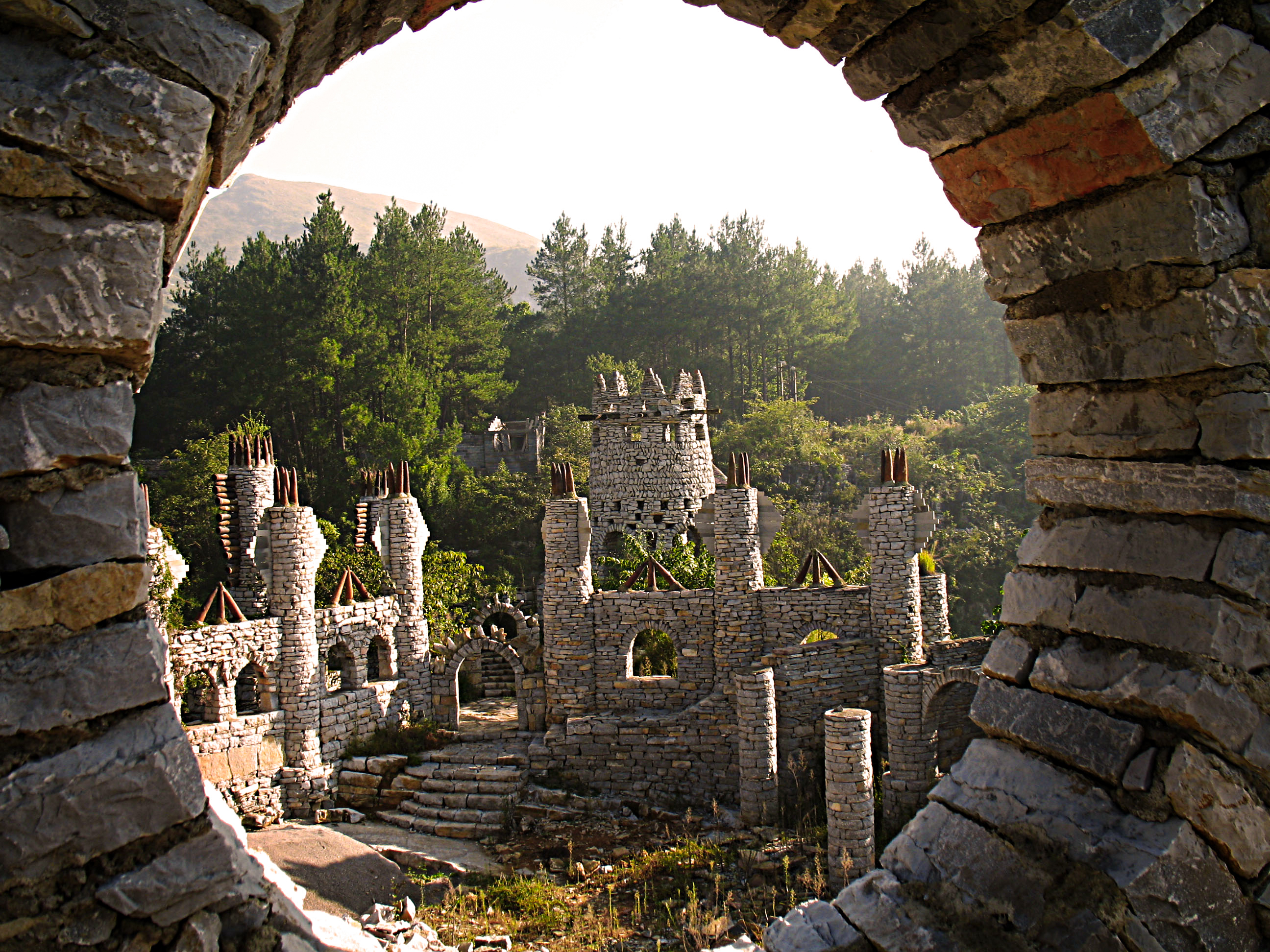 I ask Song about comparisons the media has made between him and Gaudí. “Gaudí is the greatest,” says Song. “That his work remains unfinished represents the constant and persevering pursuit of art. I can only think of him as my idol.”

Like Gaudí’s work, could Yelang Valley remain an ongoing project long after its creator is gone? Or will money-minded developers attack weakened defences when he’s not there to repel them? When considering such obvious threats to the park’s future, Song shrugs, smiles and sips more tea.

“The park will always be half-done,” he says. “The other half will be left to nature or history or future generations. It’s like the Great Wall or Angkor Wat. Eventually it will be interpreted by nature. There will be moss. It will be weathered and worn. There will be beauty of imperfection.”

He pauses for yet more tea. Song’s wife Wu Ping, wrapped up in a cosy coat, photographer Matjaž Tančič and I all lean forward, eager to hear more from this gently thoughtful artist. Even the cats stop licking themselves, reacting to our silence.

Song continues. “This is not like assembling a car then driving it once it’s finished. My work will always grow, and if future generations think there are imperfections, they can improve and add to it. This is something I long for: work that combines heaven and man in a harmonious way. It’s perfection for me.”

As I leave I pass a small blue truck arriving at the park entrance and tipping out another pile of rocks for the farmers to haul up the valley banks and forge into a rugged forehead or crooked mouth. Another new day, another new face.

+ An at-a-glance look at Guiyang’s top places to wine and dine, shop and rest your head 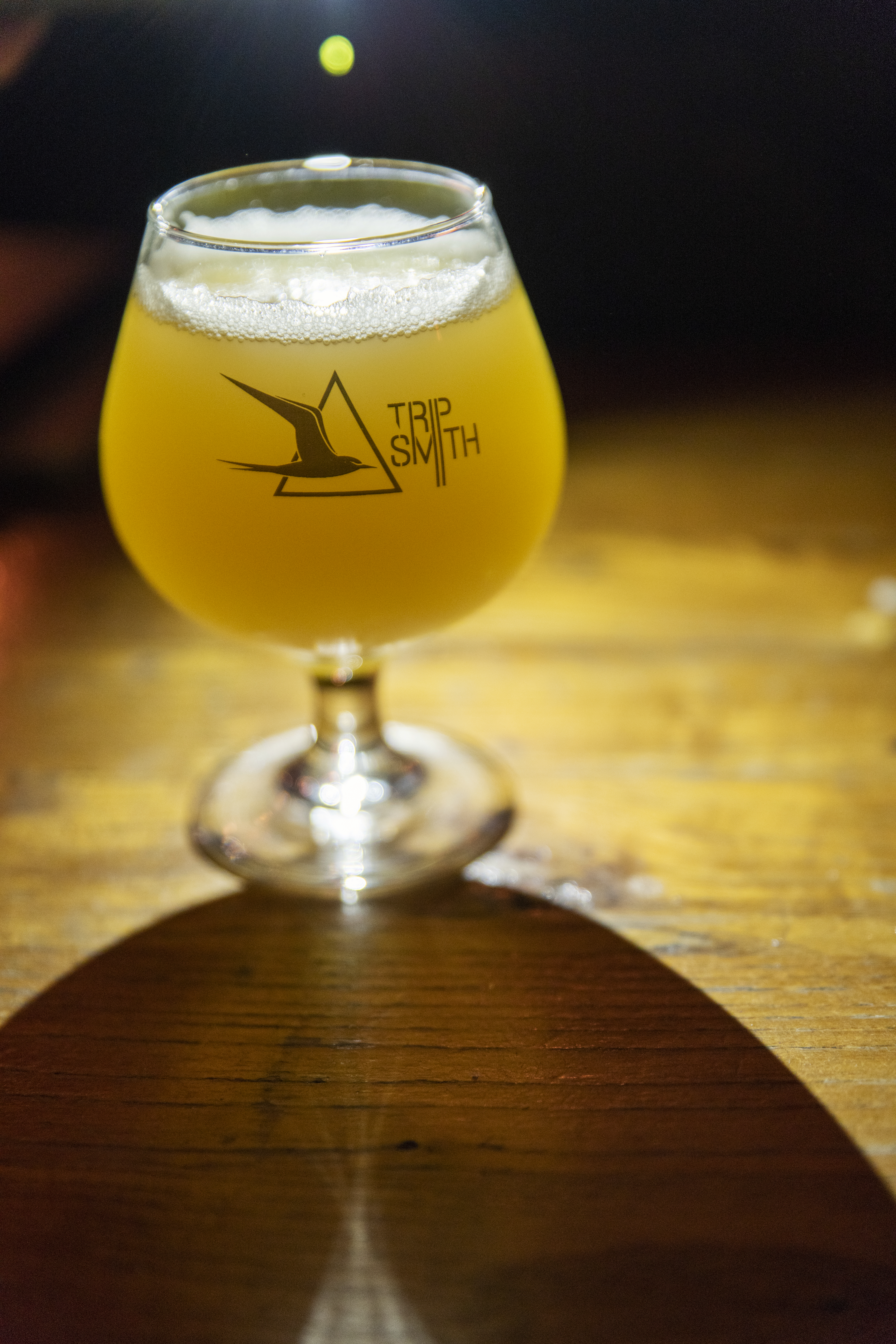 A few pints at this cosy, cool bar is a stellar reward for exploring Guiyang’s nightlife beyond the main bar strips. The pub-style food is decent, but seek out this alley venue for its great craft beer, cocktails and enjoyably hipster atmosphere.

Hip-hop heads can fill up here on loud rap from the stereo, cool music-related trinkets and clothes from the small shop section and imported beers from the fridges. There’s a decent spirit selection and a roof terrace, too.

The regular staff dancing sessions at this traditional Miao cuisine restaurant chain provide a cheesy-fun backdrop to some of the best sour fish dishes in Guiyang. Also worth trying is the hot pot-style lamb.

Kempinski Hotel Guiyang
The kind of luxury you’d expect from a Kempinski is duly delivered at this huge hotel, a 15-minute drive from Guiyang Longdongbao International Airport. The deals that include access to the business lounge, where good buffet meals are served alongside free-flow drinks, are worth considering. 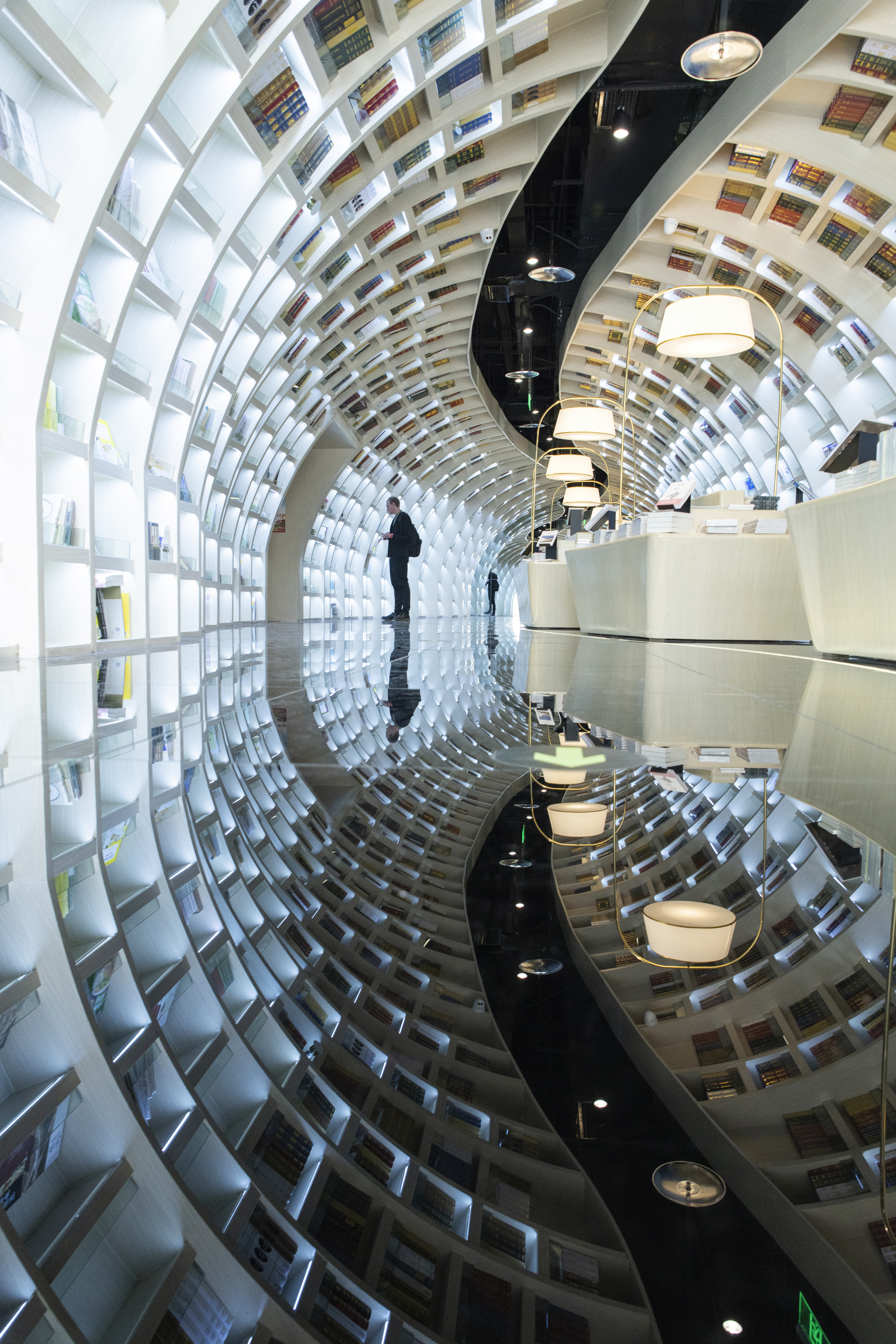 Opened last autumn and arguably the most beautiful bookstore in China, this literary labyrinth has become a destination for design nuts with its retro-futuristic, cave-inspired style. Beyond reams of Chinese language books, it has great arty gifts and a café.

Fly to Guiyang with Hong Kong Airlines to check out the mystical sculpture park! Click here