The graffiti scene in the Taiwanese capital is thriving. A small community of nearly 30 active artists straddles a fine line between the illegal world of tags, bombs and throw-ups, and large murals done in the six legal graffiti zones opened up by the city government in various riverside parks, a seventh now in the Ximenting District’s Taipei Cinema park. 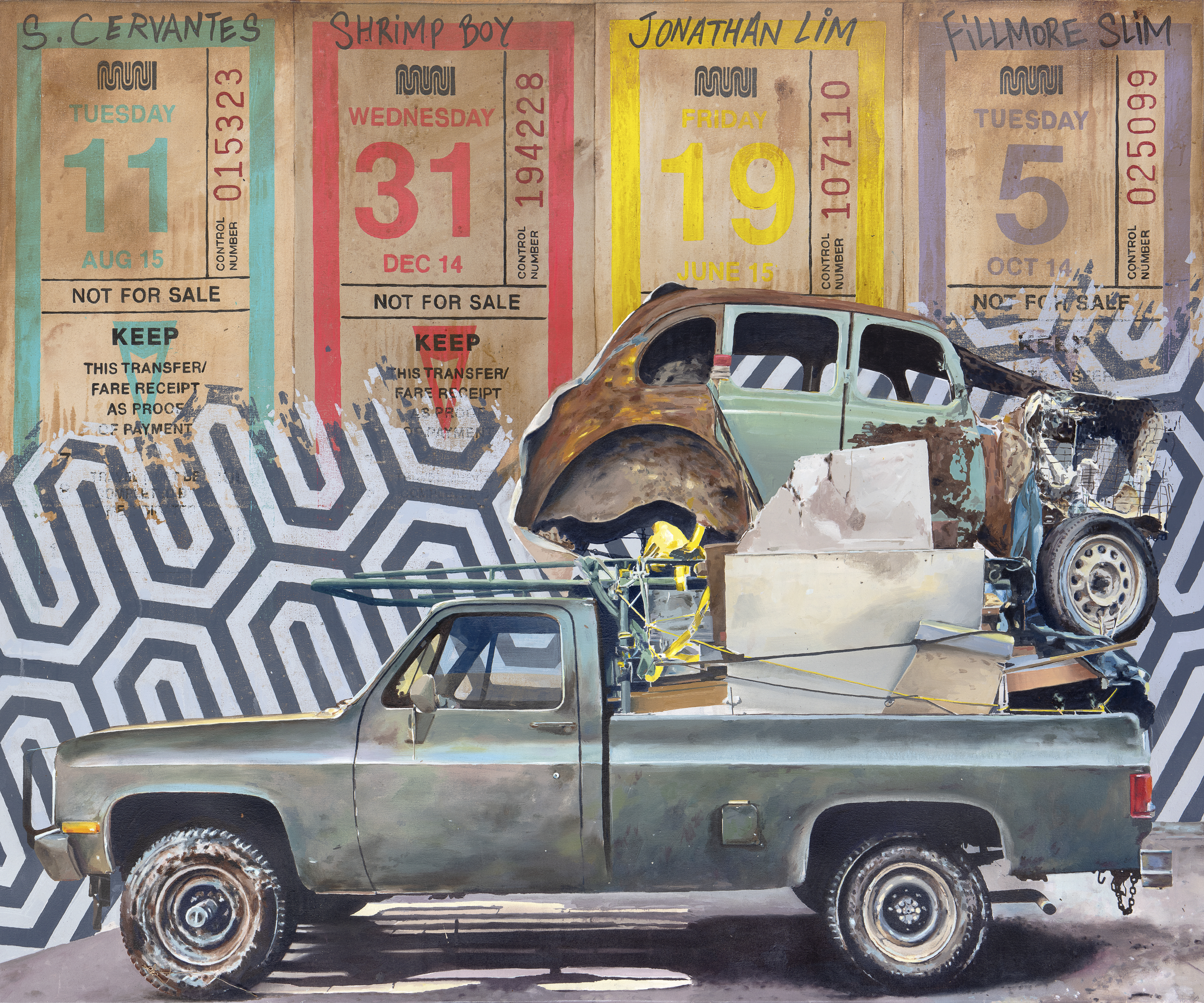 Since the legal zones came into being over a decade ago, those who have been in the scene from the beginning, like businessman and art/music promoter Jimmy Cheng, have seen local artists evolve, moving from the old school tags and bombs first seen on the streets of major American cities like New York to incorporate styles from around Asia and elsewhere, creating an aesthetic that is entirely their own.

“Now, graffiti here isn’t like old school style,” says Cheng. “It’s improved. Because there aren’t that many artists in Taiwan, the ones here know they can’t limit their mindset.” 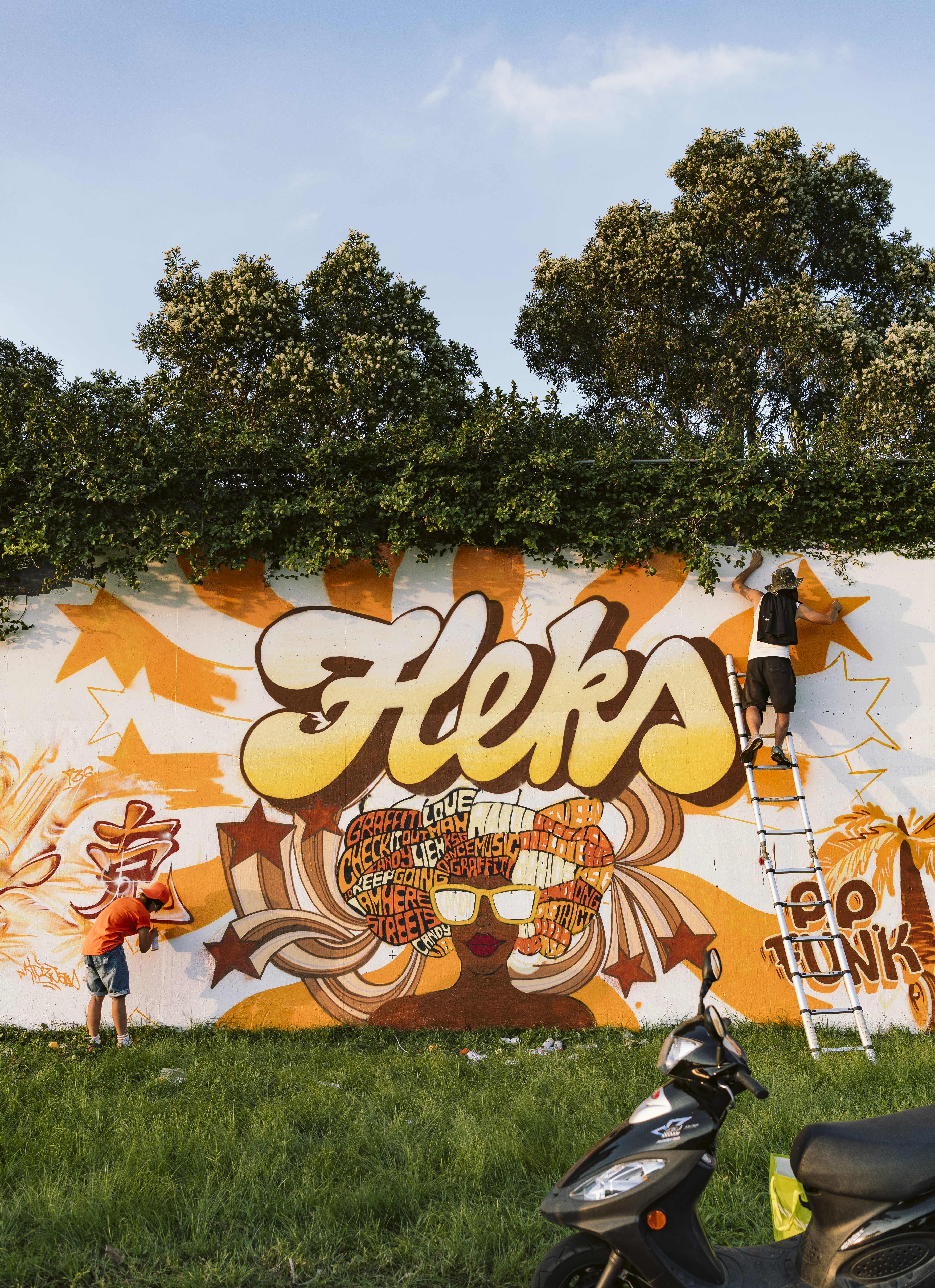 In Taipei, as is the case elsewhere, graffiti will always walk that fine line between the shadows of the underground and the light of day. As a new and more modern Taipei blossoms, and a youthful push in politics emerges in the form of new parties, the city’s small clutch of street artists finds itself coming out from the shadows all the more often, tenuously embracing a brave new world. And slowly, cautiously, the mainstream is taking notice. Acquaint yourself with the artists behind some of the most prominent works in the city. 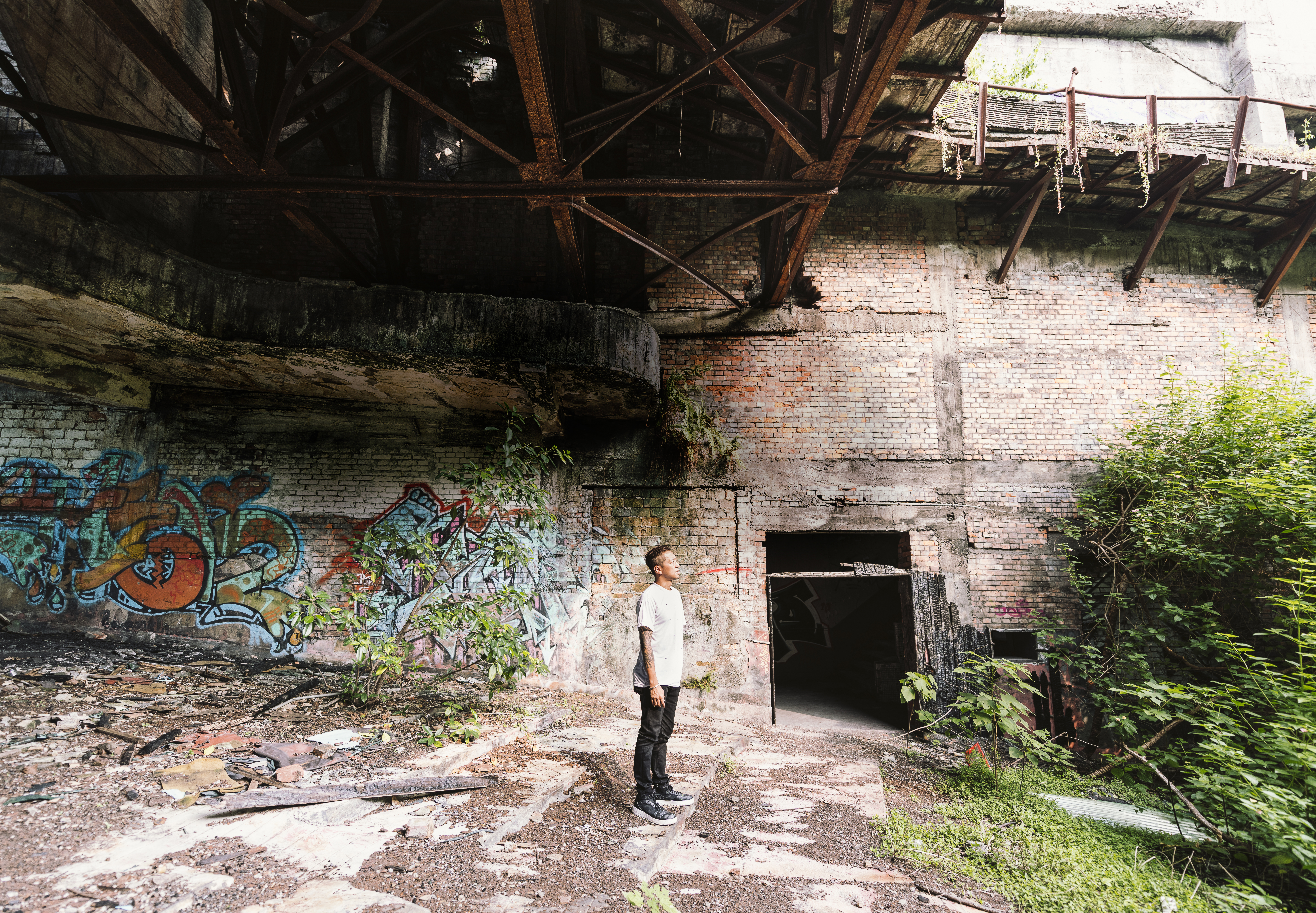 The drizzle on an early August day hasn’t stopped a crew from finishing up a large piece in Ximenting Taipei Cinema Park. The three-man unit working in the central shopping district adds a few touch-ups, unconcerned by the drops falling on their heads or the prospect of police intervention. After all, this is a legal graffiti zone.

The zone is the brainchild of serial entrepreneur Jimmy Cheng, head of the verbosely named Taipei Alliance for the Advancement of Multi Art Culture Youth Center, and artist Colasa Lin. Lin, who is 37, originally hails from Hualien on Taiwan’s east coast, and 41-year-old Cheng was born and bred in Taipei. They first approached the government about opening up a legal space for graffiti over a decade ago but were turned down. So, they took matters into their own hands, starting on a street in Ximenting, a bastion of subculture in Taipei known for its abundance of tattoo parlours.

Cheng recalls, “We painted the whole of Tattoo Street in one night,” he says. “After that, the government felt it was a good idea after all and they told us we could start with the Cinema Park.”

Graffiti in the park was a hit with locals and foreigners alike in the tourist-laden area and today, Cheng hopes to turn a portion of Ximenting into Taipei’s answer to Melbourne’s Hosier Lane, a street dedicated to graffiti. And when it comes to Taipei’s talented group of artists, he wants to see more credit given to them.

“I want them to have their work recognised. If you see a piece on the wall, I hope people can know who did it, and they can take a photo, post it to Instagram or Facebook and tag the artist so more people will know them.” 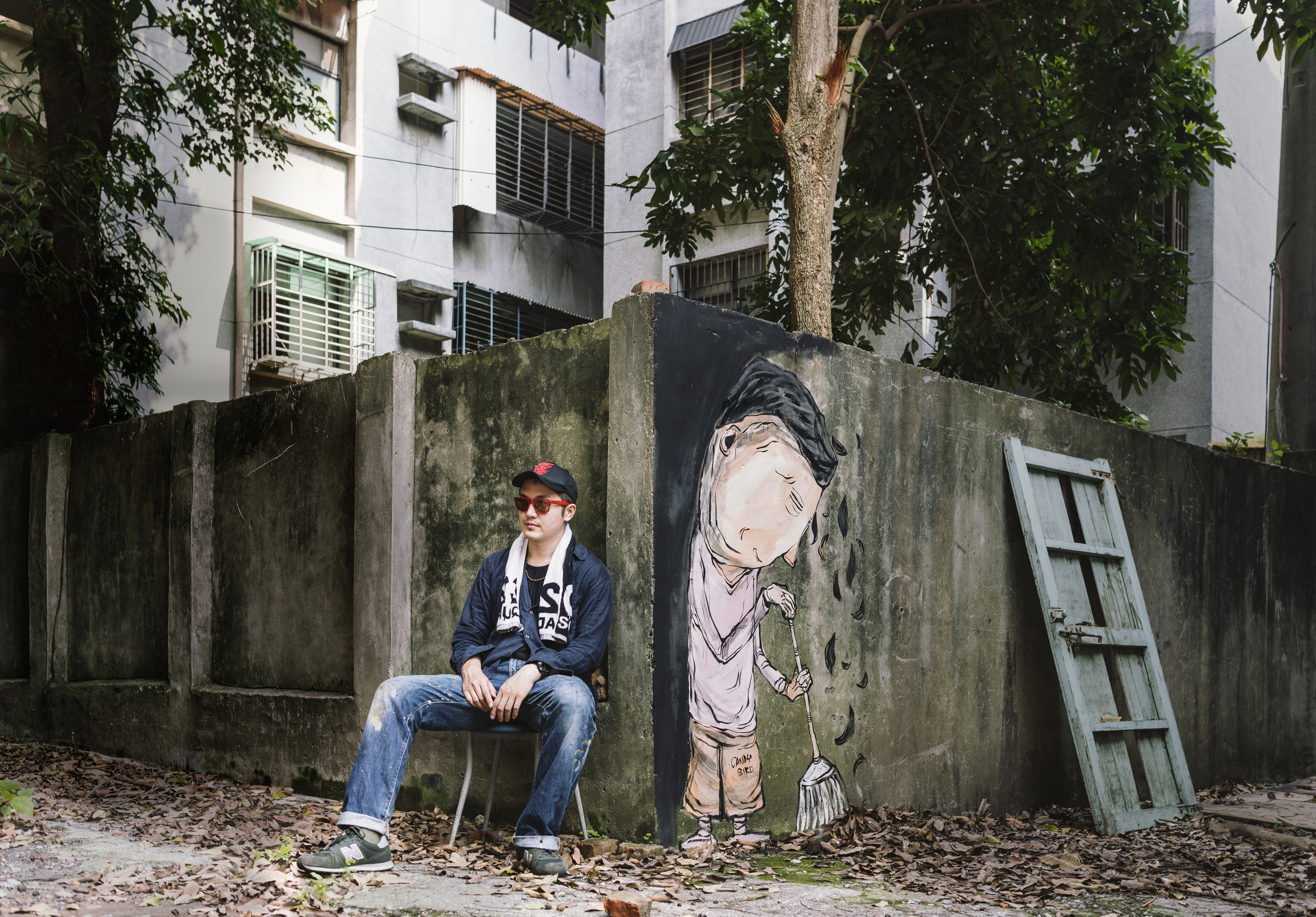 Voice of the people

The man also known as Chung-Yueh Han is one of a few local artists to make the transition from the street to the mainstream. Now 36, he once made a living working in a noodle shop by day and as a bicycle deliveryman. Today, he’s a full-time artist. He got his start in oil painting while majoring in fine arts in Taipei. By his own admission, though, “I was pretty lousy in school, so I didn’t learn many techniques. Mostly I learned by practising.”

In 2010, he decided to delve into street art. “I knew graffiti from when I was studying in university, so I just wanted to try,” he says. As Candy Bird speaks, peppering his speech with self-effacing humour, his youthful appearance and laid-back style make it easy to forget he’s a few years shy of 40. “Spray cans were expensive,” he says of his early forays into street art, “so I used water-based paints and brushes. After the first time, I was excited, so I tried to do more.”

Candy Bird was inspired by the social justice movements springing up in Taiwan as his own artistic career came into bloom in the 2010s. There were issues related to the government seizure and demolition of housing that had long stood in certain Taipei neighbourhoods, but was suddenly deemed illegally constructed once developers became interested in the land. Not only did the artist immerse himself in the protests surrounding this and other contentious issues, but he also painted pieces expressing his views. “I’ve been involved with issues to do with gentrification and urban development, and I’m also concerned about the minority people,” he says.

Perhaps ironically, the city government of Kaohsiung has commissioned the artist to paint on steel security doors and the walls of former warehouses and factories that have turned into art galleries and creative spaces. But when it comes to walking the line between the art world and paying clients, Candy Bird says both are equal opportunities for artistic expression. “Within legal conditions, you can do many things. But with graffiti you have to be quick. It’s a different way of presentation.” 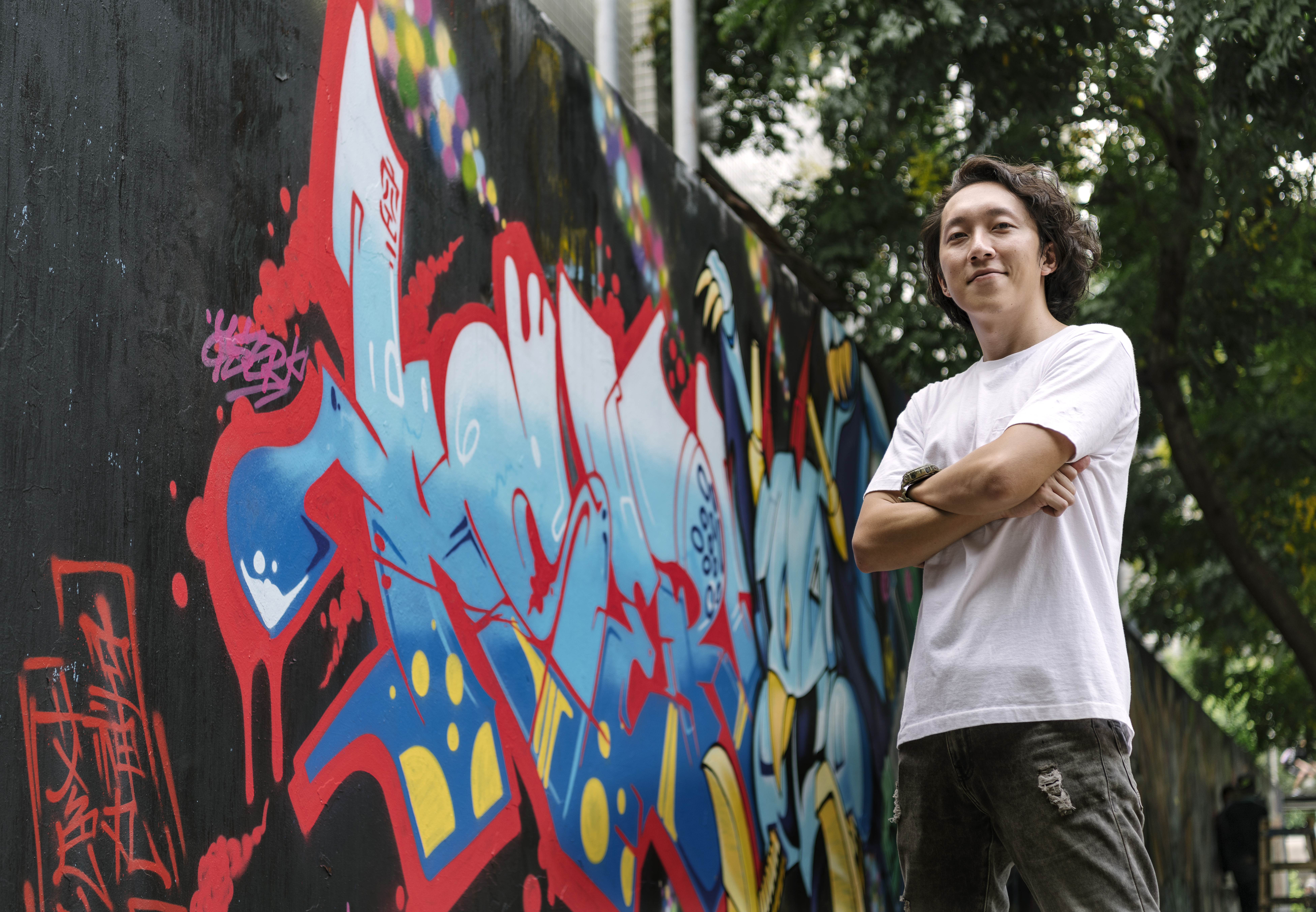 Aserk, aka Chung-hsien Chu, hopes to raise the profile of graffiti art in Taiwan by bringing it closer to the mainstream. First introduced to the world of street art via hip hop while in university, the 33-year-old Tainan native was drawn further in when he took a working holiday to Australia in the early 2010s. The jaunt, during which he collaborated with different artists from all over the world, opened his mind.

“The people there love to share what they’ve learnt,” he recalls, referring to everything from painting techniques to simply opening creations up to critique.

Upon his return in 2014, he organised the first legal graffiti event in his hometown. “I found an abandoned old village in Tainan, asked the neighbourhood for permission and started painting there.” Erkong, the village where he and his friends covered the walls, has since been bulldozed to the ground, and Aserk relocated to Taipei a couple of years ago.

With an old friend from Tainan – the artist known as Chocoz – Aserk formed a graffiti crew called ANC Kidz (the ANC is short for “ancient”, a self-deprecating joke). The crew started a semi-regular graffiti event in Taipei’s legal zones called Kidz Jam, with the goal of getting more artists together to put their art in a place where the public might see it. When legal graffiti zones emerged, Aserk took advantage of no longer having to do his art under the cover of darkness.

He has become one of the scene’s most publicly celebrated contributors. In early September an exhibition of his work, called “Graffiti x Friends” was staged at Oomph!, an art space in Taipei’s Da’an District. The self-taught artist favours the bulbous lettering and bright colours of the old-school New York style in his tags and bombs, depicting everything from old Nintendo video game characters to psychedelic scenes from nature in his collaborations with other artists and friends. Whatever he portrays, the end goal is always the same, he says.

“You have to change something, or change how people think about this world,” he says of his purpose in doing graffiti. “You can challenge everything through graffiti.” 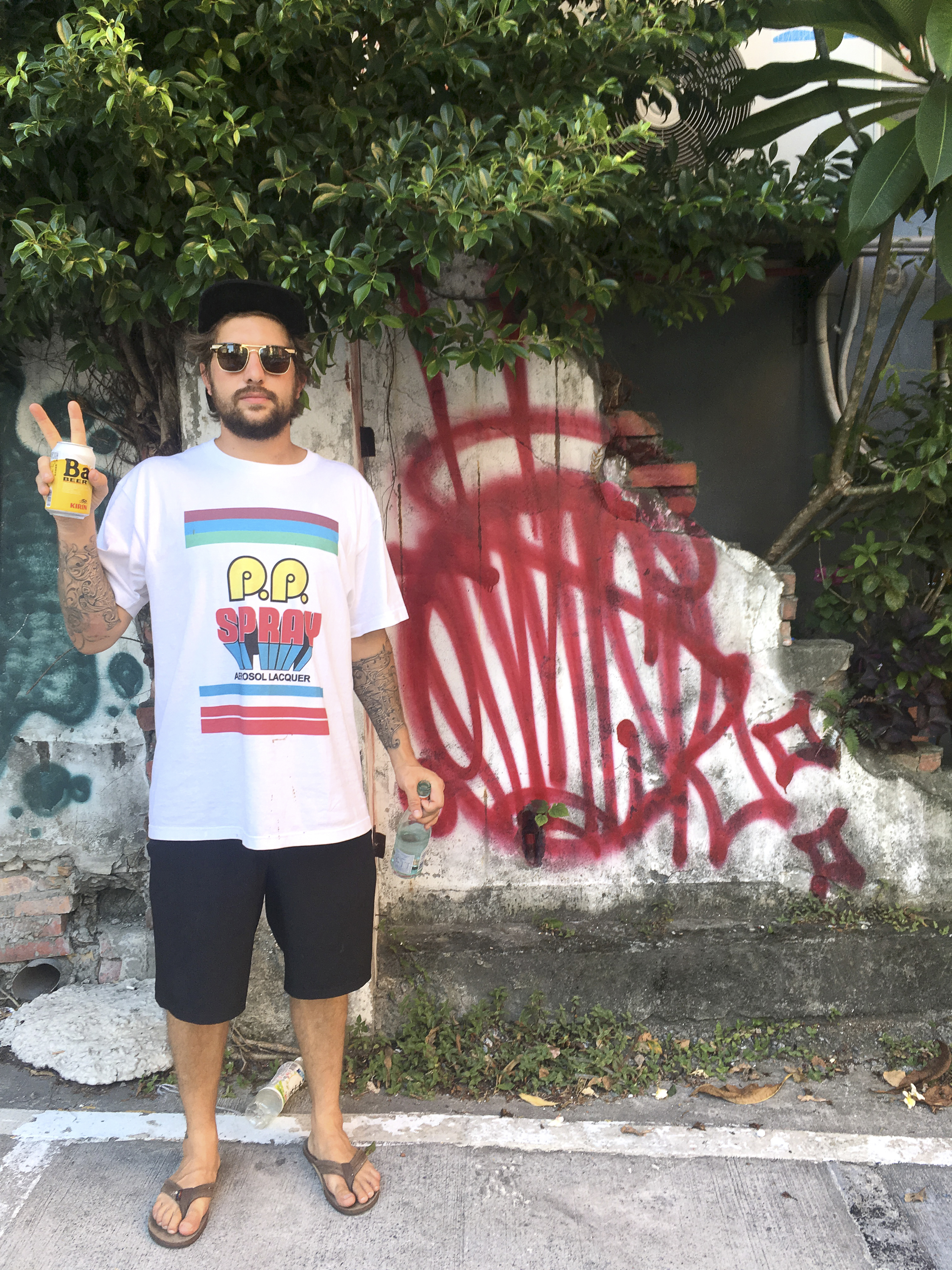 The Spray Can Poet

After over a decade in Taiwan, 35-year-old Optimist remains California to the core. His speech is peppered with NoCal slang, heavy on “hella” and “cutty”. The graffiti artist, painter and photographer was living in San Francisco when he was lured to Taipei by CHEK, another street artist already living here at the time. Tired of getting hassled by law enforcement for doing his art, Optimist was drawn by the creative freedom Taipei seemed to offer.

“CHEK kept sending me emails with photos of himself painting whatever he wanted,” he recalls, lying back on the couch in his cramped, blisteringly hot rooftop apartment in the Dongmen area. “And I was like: I want to see what happens to me if I put myself in an environment where I have no idea what’s going on.”

Upon arrival in 2006, he found the city to be a virtual blank canvas. “It was untouched, untapped,” Optimist says. “No one had done anything crazy – besides CHEK and DABS,” he says, referring to a second street artist.

His art, he says, is about the end of the world. A collage mounted on his apartment wall is an eclectic mix of machinery and nature, trash and majesty – the same themes that pop up in his street art.

“I get a lot of reference out here. Just textures, decrepit [stuff],” he says. “Taipei is a makeshift city. If you look at the roofs, they’re just patched together. It’s so cool.”

The roofs Optimist refers to dot the cityscape of four- and five-storey apartment complexes, in their own way embodying the spirit of the old, gritty Taipei.

Optimist fully embraces the chaos and grit here. “Taiwan has a colour scheme,” he says. “That burgundy, washed-out green, tans and rust, all that stuff. It’s a beautiful place, man.”

Three places to check out street art in Taipei

On the banks of the Keelung River, the park’s spacious walls are always changing, with graffiti artists throwing up tags, bombs and more carefully considered pieces at will.

The largest legal graffiti space in the city, this park located in upmarket Neihu is fast gaining ground as a destination for artists looking for a large wall to paint on.

Fly with Hong Kong Airlines to Taipei and check out the magnificent street art! Click here