Forward-thinking hoteliers are bringing back the customs and comforts of the classic ryokan – with some pretty contemporary upgrades, as Rob Goss discovers

Soak in an open-air hot-spring bath high above the city. Immerse yourself in the ritual of a tea ceremony – following each deliberate wipe and twist of the tea bowl and the carefully orchestrated movements of the tea master – while the business and financial districts move at breakneck speed outside. Or find a moment of Zen on a zabuton floor cushion, surrounded by intricate caging. All are possible with Tokyo’s new breed of ryokan.

For anyone who knows the Japanese capital, it might seem odd to be discussing inns. After all, modern-day Tokyo is a world away from Kyoto with its historic inns or countryside hot-spring retreats like Hakone where city dwellers can soak in onsens and enjoy centuries-old traditions of omotenashi (intuitive hospitality). History has seen to this. After the devastation wrought by the 1923 Great Kanto Earthquake, which claimed more than 140,000 lives and left such destruction in Tokyo that some at the time proposed the capital be rebuilt elsewhere, very little of old Tokyo remained. The bombings of World War II, 20 years later, then destroyed many of the traditional structures that had managed to survive the quake. The city’s ryokan were gone forever. Or so it seemed.

Today, a new breed of contemporary guest houses are, in fact, bringing these historic inns back to the city – only with a subtle difference. Tapping into a wider trend in Japan right now to create modern twists on tradition, they are incorporating aspects of the classic ryokan with forward-thinking design. 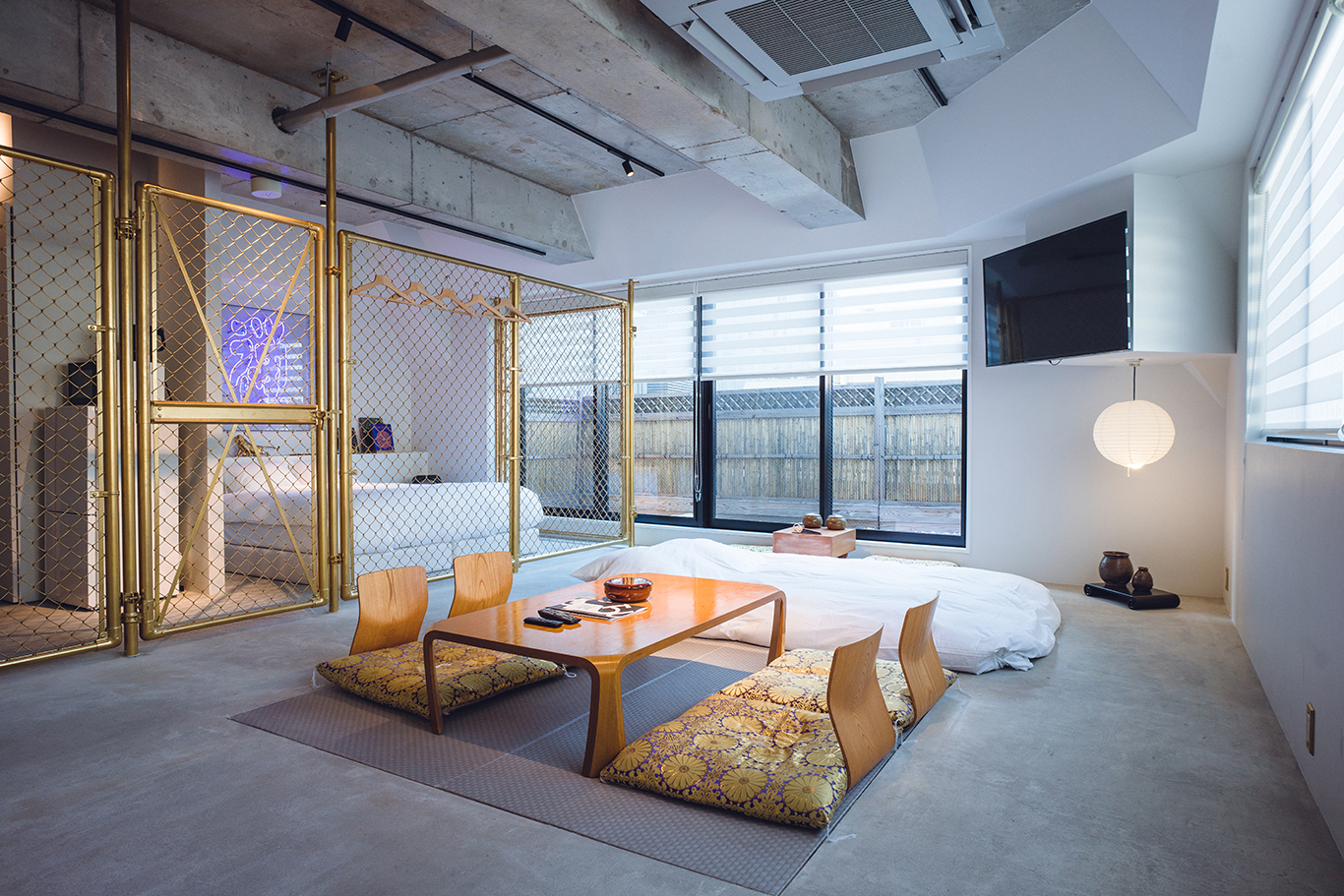 Perhaps the most striking example of this is BnA Studio Akihabara, which opened in March this year. A self-described “art hotel”, BnA Studio comprises five rooms for a modern art-loving audience, equipped with furnished kitchens, washer-dryers and swish bathrooms. Each is contemporary, yet some have been created with a nod toward Japanese craftsmanship. Stepping into the first-floor lounge, I find a convivial buzz, thanks to a large workbench and table where guests can chat over a drink or hook up their laptops. 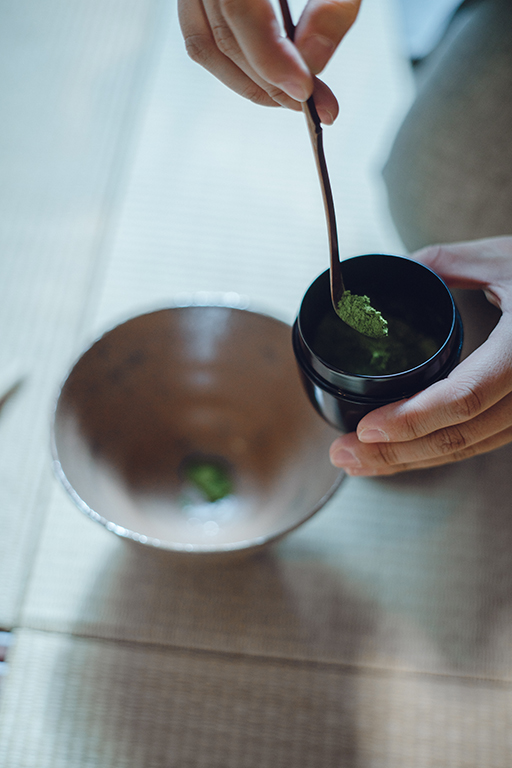 The Hailer room, designed by artist collective 81 Bastards appears to have the most obvious connection to a classic ryokan, with paper screens and dark rustic woods that evoke an old Kyoto townhouse, plus a striking reworking of Edo-era artist Sotatsu Tawaraya’s iconic 1620 screen painting of Raijin and Fujin, the gods of thunder and wind. Here, it’s painted on a traditional gold leaf screen made by Kyoto-based craftsman Masahiro Inoue and positioned on the wall above the room’s king-size bed. Then you have the art installation-like Zen Garden room, created by 51.3 G-WAVE artists Nanook, Kazuma Ogata, Mitsuko Shimae and art director Taku Sato. It takes inspiration from the concept of Zen and employs a mix of traditional ryokan features like a low, centrally positioned table with futuristic elements such as caging. 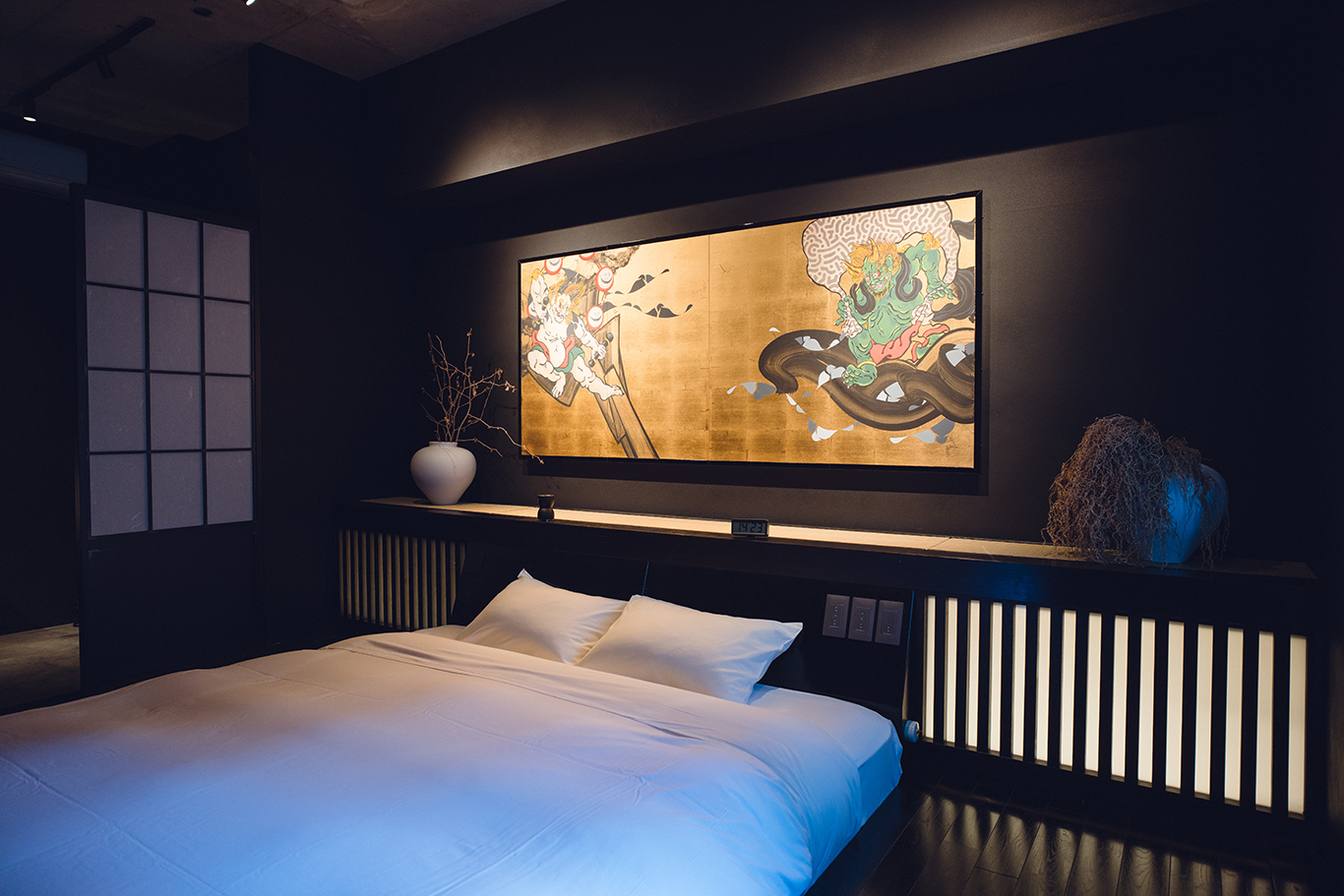 BnA’s Sabrina Suljevic explains the concept: “It combines the stereotypical image of Zen Japan with the chaotic energy of a modern metropolis like Tokyo. It’s about addressing modern needs and incorporating elements of minimalism found in traditional Japanese architecture and rock gardens.”

You could argue that the seeds for hotels like BnA were sown 15 years ago with the 2003 opening of the Andon Ryokan in Minowa, in Tokyo’s Taito Ward, located close to popular east-side sites such as Sensoji temple in Asakusa. Andon owner Toshiko Ishii, a gently spoken sixtysomething with a mellow air, says her ryokan’s journey began with a simple question of how aspects of the Japanese lifestyle could be introduced to foreign visitors to Tokyo at a time when the city’s traditional inns were dying off and being replaced by a number of Western-style hotels. The answer was to create what Ishii calls Tokyo’s first “designer ryokan” by blending the best parts of a historic guest house with modern touches and a focus on serving foreign travellers, who now make up the vast majority of the Andon’s guests. 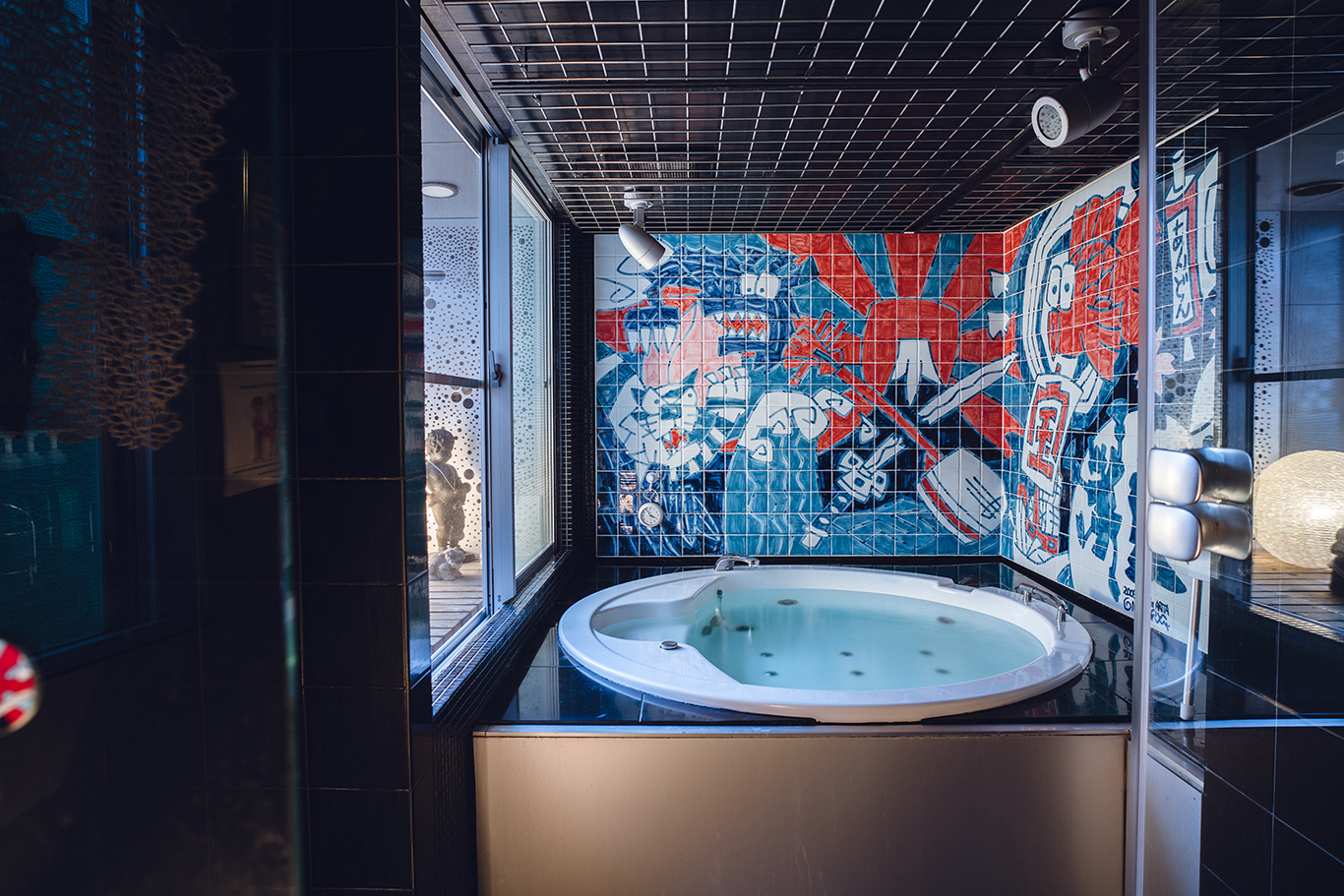 “In many ways, we are a traditional ryokan. Our rooms are small – though this size is a typical Japanese size – each have tatami mats and futons, and we serve Japanese breakfasts. We also run traditional cultural events, such as the tea ceremony and workshops on flower arrangement, origami and calligraphy,” Ishii tells me as we sip on green tea in the lobby.

That’s not to say that there aren’t some notable differences, according to Ishii. “For instance, unlike most okami (ryokan proprietress) I rarely wear a kimono unless I’m doing a tea ceremony. I want the Andon to be casual.” But there’s also a practical reason why Andon’s owner eschews wearing the traditional Japanese garment on a daily basis. “Cleaning up in a kimono is hard work,” she laughs. 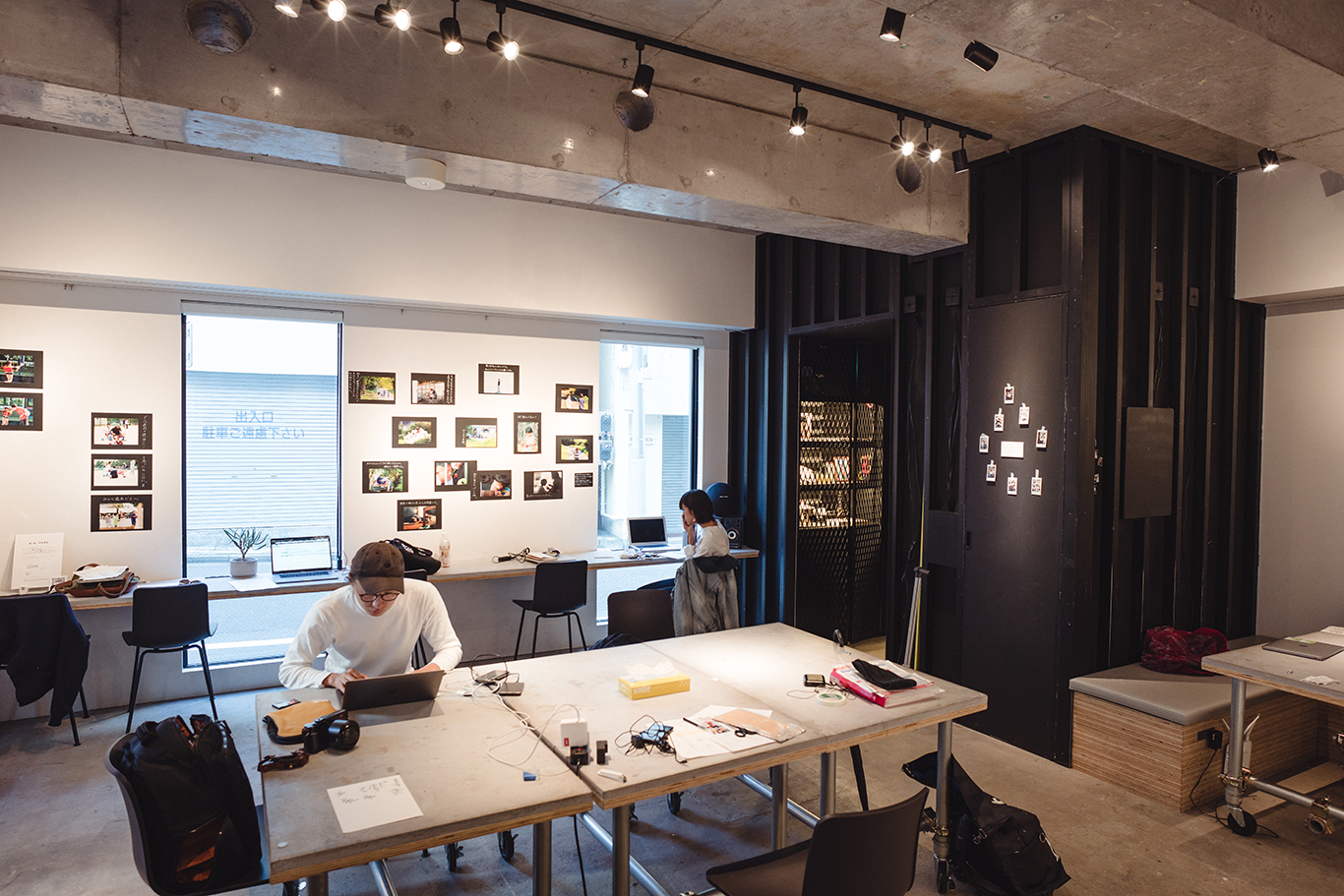 Where the Andon differs most from the classic ryokan template, however, is with parts of its design. Ishii sought the input of well-known architect Masayuki Irie of Waseda University who suggested using an ariake andon night lamp in Ishii’s antique collection as inspiration for the project, giving the glass-fronted property a distinctive glowing box-like façade. In another departure from the classic, creaking old ryokan – and many historic properties do creak – Irie gave the inn soundproofing for additional peace and quiet. In 2009, the Andon took the modern touches a step further, commissioning a pop artist to create a 4m-tall mural on Arita-yaki ceramics, which is now installed in the property’s public bath. 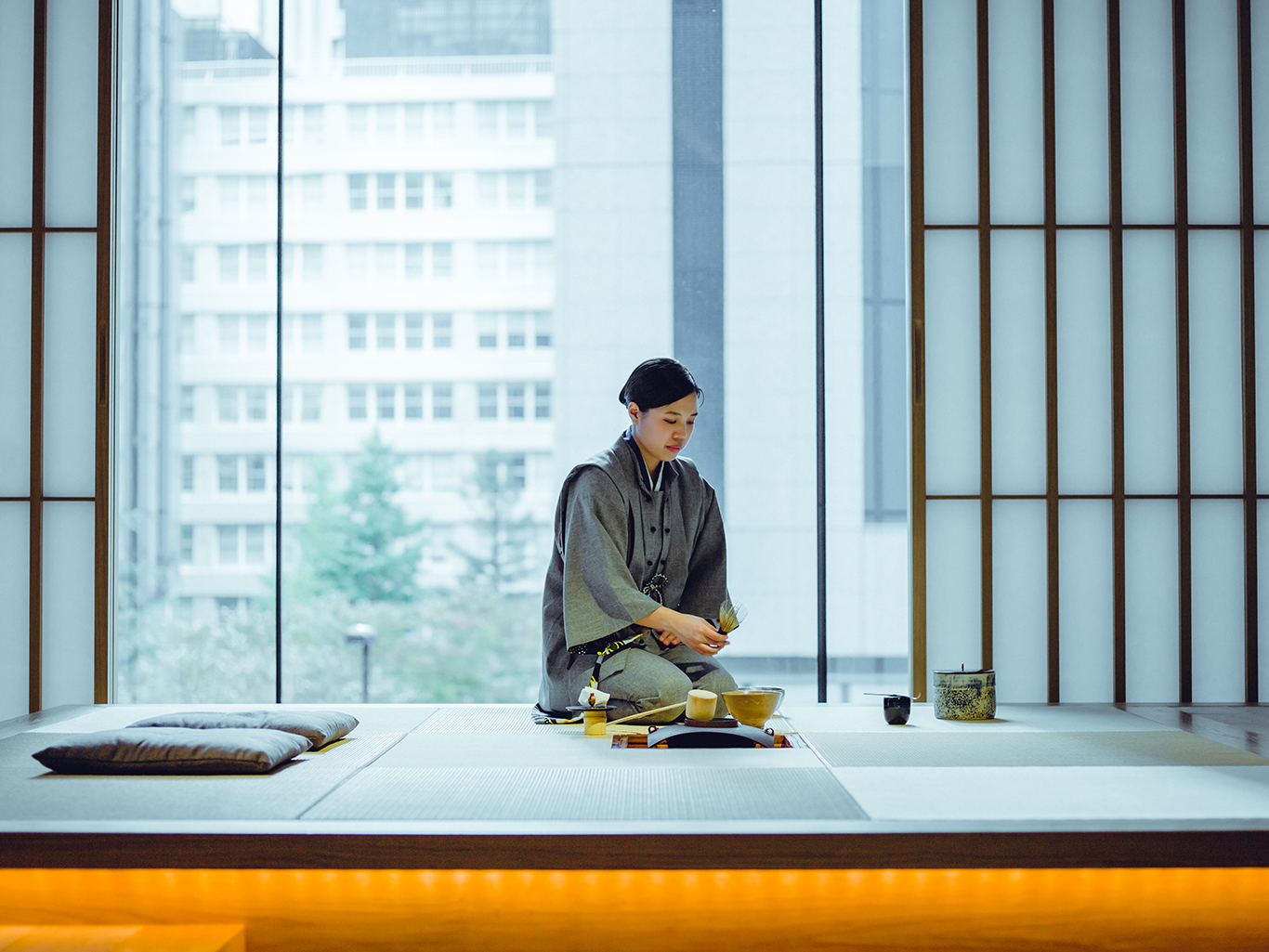 In a different part of the city – and a different price bracket from the budget-friendly Andon – is the Hoshinoya Tokyo, aimed at well-heeled travellers looking for a calming, luxurious retreat. Opened in July 2016 in the Otemachi business district – close to the Imperial Palace and a short cab ride to the upscale Ginza district – this is the fifth of Hoshino Resorts’ Hoshinoya properties in Japan, following the original in Karuizawa in Nagano prefecture and others near Mount Fuji, on Taketomi island in Okinawa and in the Arashiyama area of Kyoto. Those other Hoshinoya hotels have all been built in tranquil settings, or at least removed from the urban hustle and bustle, and in that sense Hoshinoya Tokyo is a departure for the hotel group, as well as something very different for Tokyo. 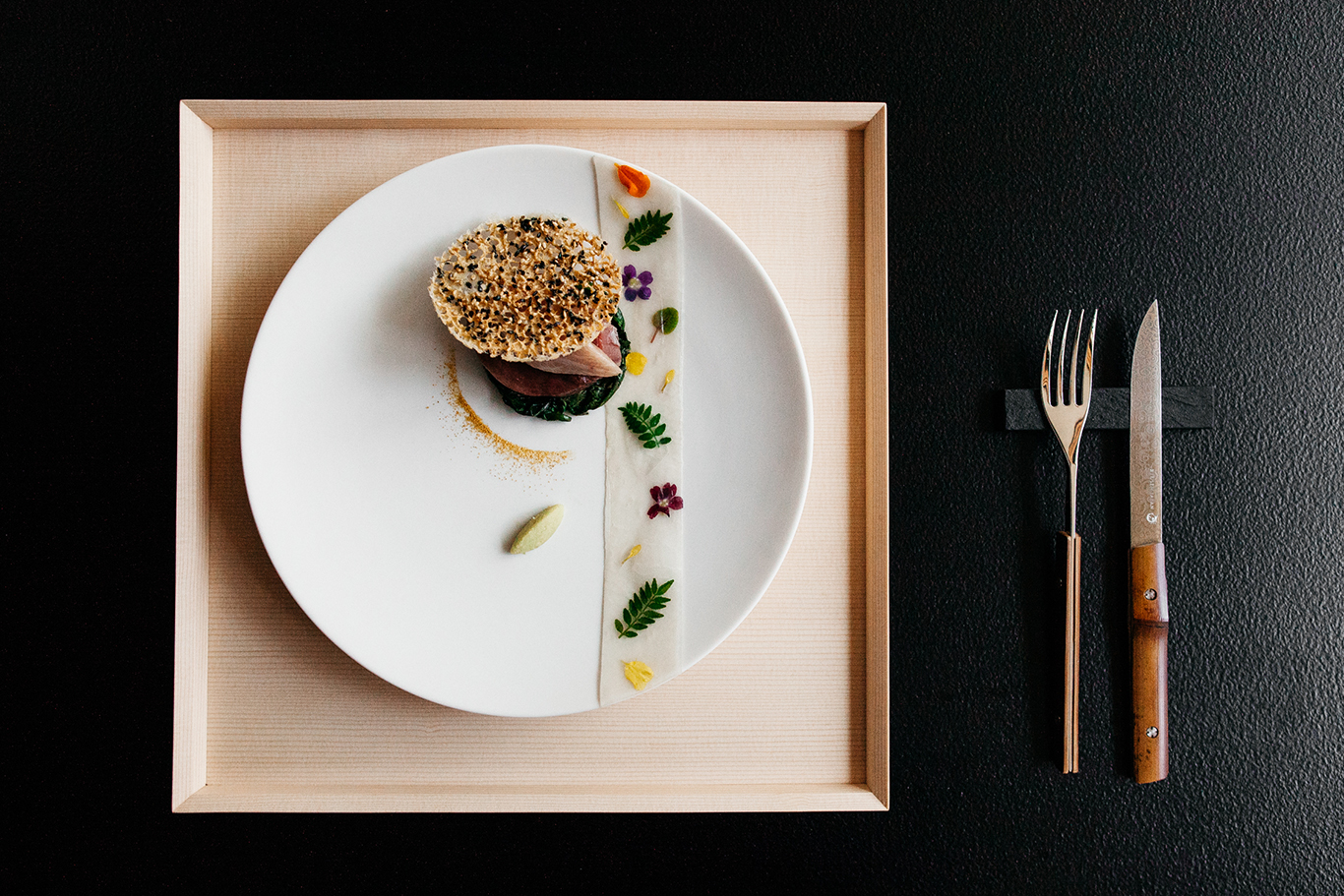 “Instead of focusing on what we could offer our guests, I began to think about what we could offer Tokyo. That was how I arrived at the idea of a tower ryokan,” explains Yoshiharu Hoshino, CEO of Hoshino Resorts. “There are many elements of traditional Japanese culture that are disappearing here. The modern Tokyoite doesn’t see a place for a ryokan in the city. If the ryokan manages to remain in Tokyo years from now, it’ll be because of one reason: because it has evolved to become even more accommodating and intuitive than the Western hotel,” he says.

In place of traditional kaiseki-ryori – seasonally focused meals comprised of numerous small courses served at high-end restaurants and mid- to high-grade ryokan – Hoshinoya Tokyo serves up executive chef Noriyuki Hamada’s fusion of French culinary techniques with seafood-centred Japanese ingredients. Depending on the season, this might mean an appetiser such as sweet-fish wrapped in cucumber, followed by delicately poached red bream, a meunière of sole and more. 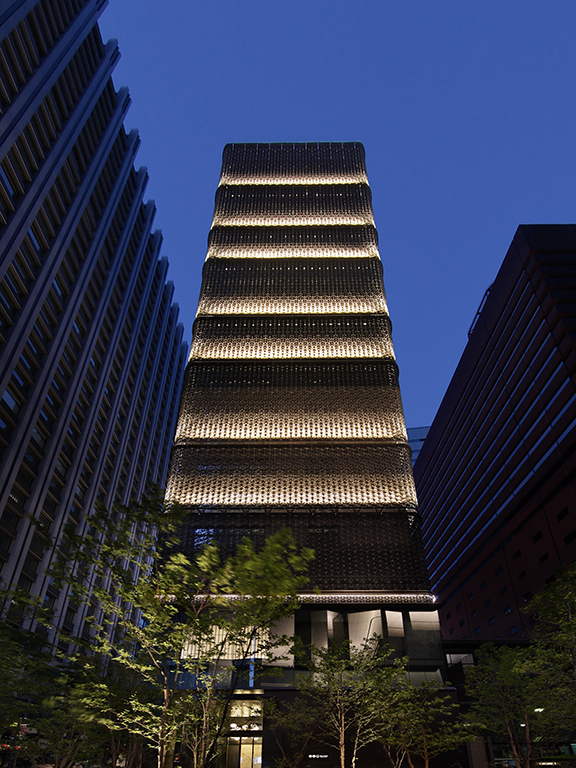 There’s an open-air natural hot-spring bath at the Hoshinoya, too – another classic ryokan component, but here it’s on the 17th floor in the heart of the city, in a building that from the outside could easily be mistaken for a newly built office complex, but which, on closer inspection, has a lattice of leaf-like patterns veiling the ryokan. The moment you step inside everything is classic Hoshinoya – an experience designed to transport you away from the hectic nature of everyday modern life. That’s classic ryokan, too. Here, going from the churning din of traffic echoing around the financial district’s skyscrapers to tranquillity happens quicker than a click of the heels – the moment you enter the bark-fronted door, in fact. Stepping inside, there’s nobody to be seen but a kimono-clad member of staff kneeling on raised tatami – a contrast to the busy streets outside. A gentle aroma of sandalwood, a high ceiling and natural lighting combine with the soft tone of the tatami to give everything a minimalist, meditative air. 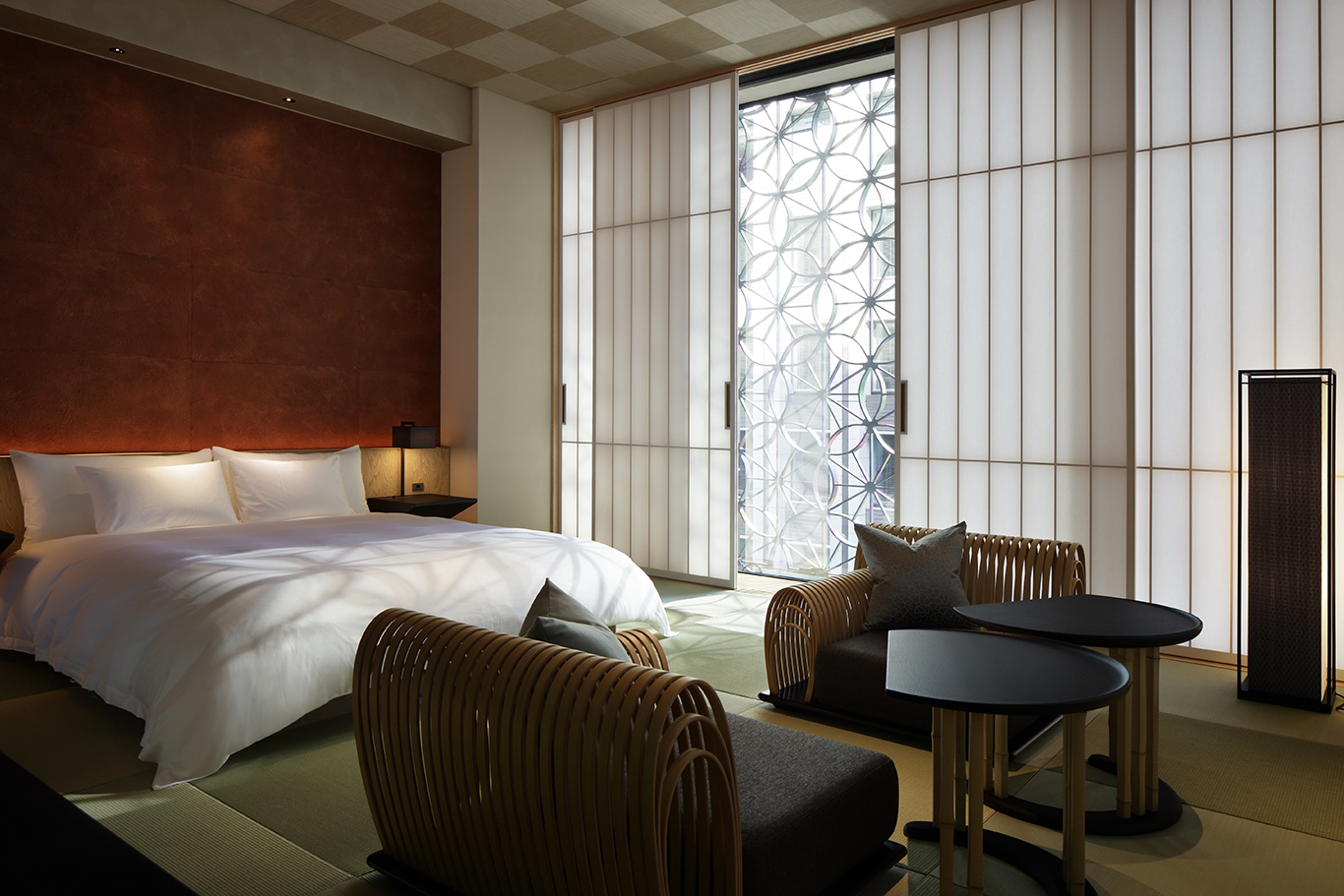 And the hospitality is top-notch. A bow welcomes you when you first arrive at the hotel; your luggage appears in your room without fuss or need for a tip; your sake glass is topped up before it is empty. Like the Andon, there is also a varied programme of cultural events designed to help guests connect more deeply with Japan, including performances of Japanese court music from the Heian period (794-1185), tea ceremonies and kodo, which is the art of appreciating incense. 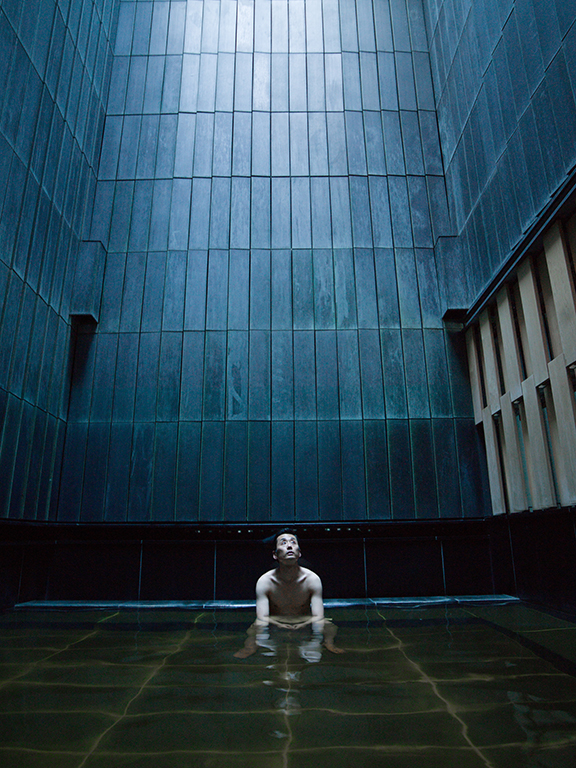 That might sound more like a quintessential Kyoto experience, not something you’d do in the ultra-modern heart of Tokyo, but as the likes of the Andon, BnA and Hoshinoya are proving, there’s still more than enough room for tradition in the capital.

An at-a-glance look at Tokyo’s top places to wine and dine, shop and rest your head

One of the plushest places to stay in Tokyo, the Hoshinoya is a contemporary five-star reworking of an upscale ryokan. 1-9-1 Otemachi, Chiyoda; hoshinoya.com/tokyo/en 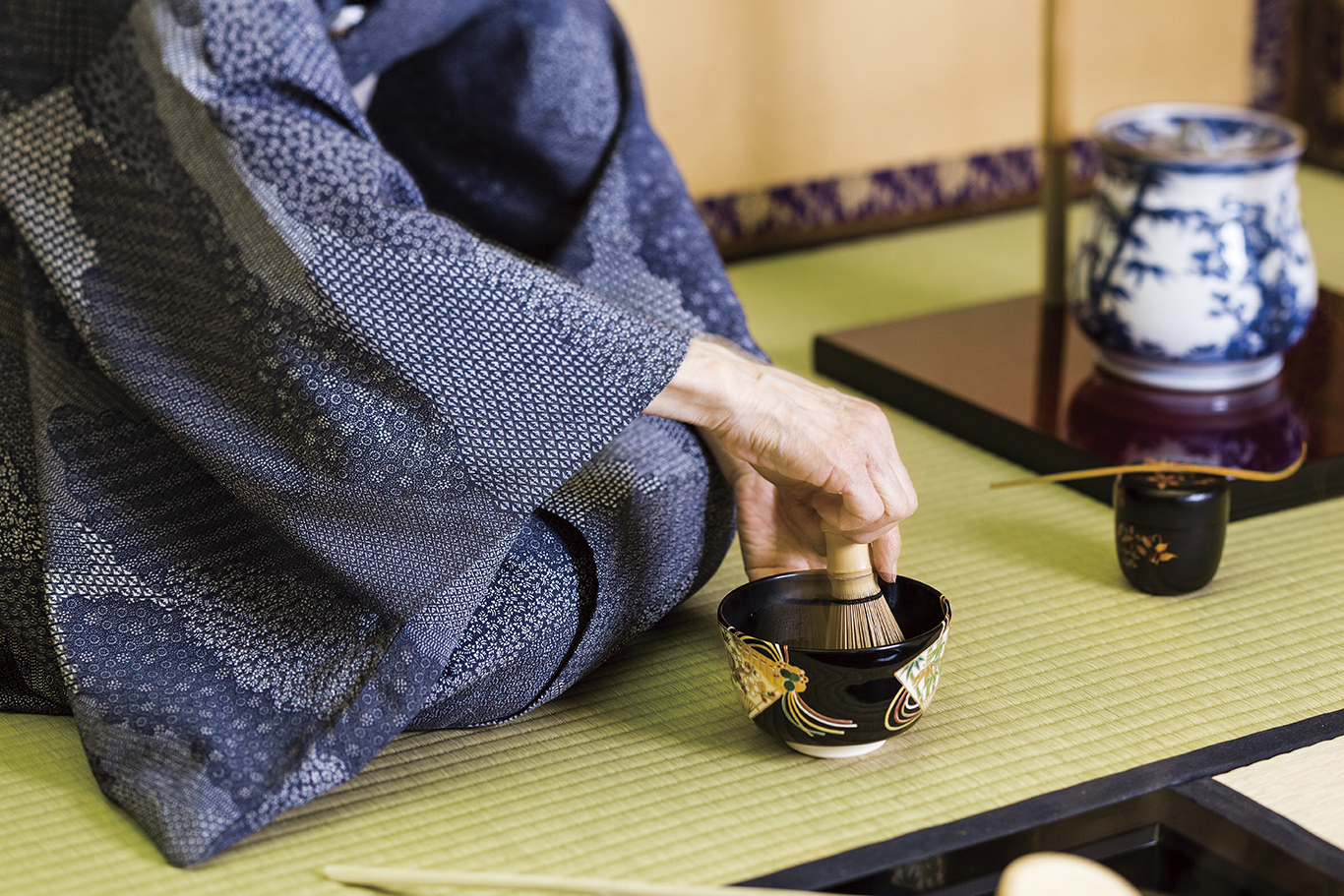 These tea chambers at the Imperial Hotel offer an opportunity for travellers to experience the traditional tea ceremony in English. 1-1-1 Uchisaiwai, Chiyoda; imperialhotel.co.jp 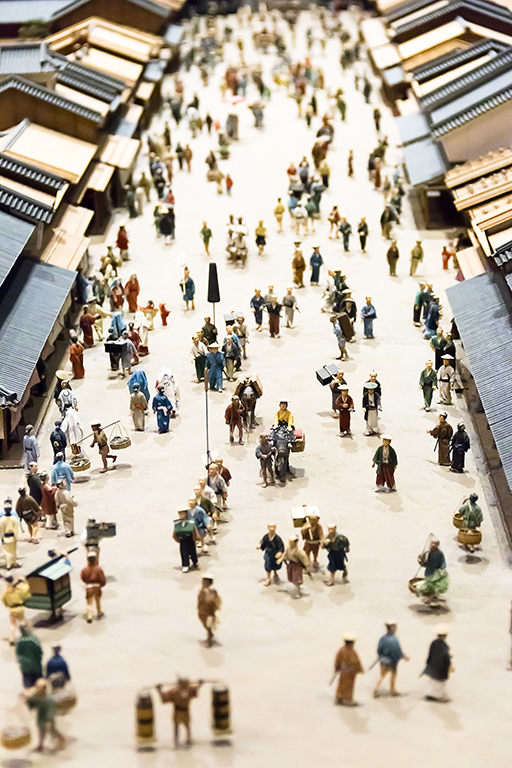 This museum traces Tokyo’s remarkable growth from the Edo era (1603-1868) through to the present day, making it a great place to discover the influence older culture still has on the new. 1-4-1 Yokoami, Sumida; edo-tokyo-museum.or.jp/en

Situated near the Kokugikan, Tokyo’s main sumo stadium, this swanky creation by architect Yoshio Taniguchi houses close to 250 shops and restaurants, a rooftop garden, along with a traditional Noh theatre. 6-10-1 Ginza, Chuo; ginza6.tokyo